Seoul: South Korean President Moon Jae-in has used a speech to the United National to call for a regional infectious disease control and public health initiative involving China, Japan, Mongolia, and North Korea to tackle health crises and lay the foundation for peace with Pyongyang.

In a video message to the 75th General Assembly in New York, Moon said collective protection of life and safety would lay the groundwork for North Korea to have its security guaranteed by engaging with the international community.

"In the face of the COVID-19 crisis that poses a greater threat to humanity than a war, we came to be acutely reminded that the safety of neighbouring countries is directly linked to that of our own," Moon said, according to an English translation of his prepared remarks. 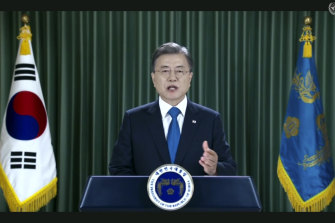 South Korean President Moon Jae-in speaks in a pre-recorded message which was played during the 75th session of the United Nations General Assembly.Credit:UNTV/AP

Moon proposed launching a "North-east Asia Cooperation Initiative for Infectious Disease Control and Public Health," but did not provide details.

"It is not only Korea’s response to COVID-19 but also the invaluable lessons Korea will be gaining from institutionalising peace that Korea wishes to share with the rest of the world," he said.

South Korea's aggressive testing and tracing efforts during the coronavirus outbreak have been praised internationally. North Korea has said it has no confirmed cases, though some US officials have cast doubt on that claim.

Moon was among world leaders addressing the two-day forum remotely for the first time. Earlier US President Donald Trump used his pre-recorded speech to attack Beijing's handling of the pandemic, saying the world body "must hold China accountable" for its actions. 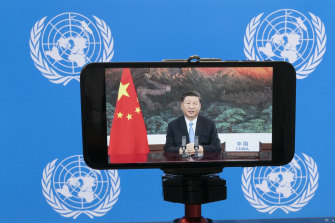 "We offer our vaccine for free for voluntary inoculation of UN workers," Putin said, even though Russia's quick deployment of the shots and the lack of rigorous testing has limited its appeal.

The Russian leader also called for an international online conference to discuss progress in fighting the pandemic, an offer that may be more amenable to other leaders.

Brazil’s Jair Bolsonaro, the first to speak to the assembly, used his address to defend his administration’s record protecting the Amazon rainforest, telling the virtual meeting of global leaders that his country has been wrongly portrayed as an environmental villain. 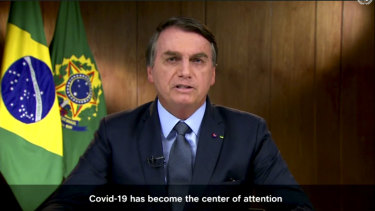 Brazilian President Jair Bolsonaro speaks in a pre-recorded message played during the 75th session of the United Nations General Assembly.Credit:UNTV/AP

The President said his country's successful agribusiness sector was feeding a global population that chose to make it a target — a veiled reference to European countries which have threatened to boycott Brazil's meat products if it does not address deforestation.

"We are victims of one of the most brutal disinformation campaigns about the Amazon and the Pantanal wetlands," Bolsonaro said. "The Brazilian Amazon is well known to be very rich. That explains why international institutions support such campaigns based on ulterior interests, joined by self-serving and unpatriotic Brazilian associations, with the objective of harming the government and Brazil itself.”

He also said his was a Christian country and denounced what he called "Christian-phobia".

Our weekly newsletter will deliver expert analysis of the race to the White House from our US correspondent Matthew Knott. Sign up for the Herald‘s newsletter here, The Age‘s here, Brisbane Times‘ here and WAtoday‘s here.