SPRINGFIELD, Mo. – A school district in Missouri announced it will reinstate spanking this school year – but with a parental caveat.

Cassville School School District superintendent Merlyn Johnson said he did not take the job a year ago with a plan to reinstate corporal punishment – a disciplinary measure the 1,900-student Barry County district abandoned in 2001.

“But it is something that has happened on my watch and I’m OK with it,” Johnson said.

Cassville is a small town with a population just under 4,000 people, about 60 miles southwest of Springfield, near the Arkansas border.

Parents were recently notified of a policy approved in June by the school board to once again allow spanking in school – but only as a last resort and with written permission from parents.

Each family will be asked to opt in or out.

‘Majority of people that I’ve run into have been supportive’

Describing Cassville as a “very traditional community in southwest Missouri,” Johnson said parents have long expressed frustration that corporal punishment was not allowed in the district.

“Parents have said ‘why can’t you paddle my student?’ and we’re like ‘We can’t paddle your student, our policy does not support that,'” he said. “There had been conversation with parents and there had been requests from parents for us to look into it.”

Johnson said families in Cassville have reacted differently than others on social media from outside the area.

“We’ve had people actually thank us for it,” he said. “Surprisingly, those on social media would probably be appalled to hear us say these things but the majority of people that I’ve run into have been supportive.”

He added: “We respect the decision of every parent, whatever decision they make.”

In 1977, the U.S. Supreme Court ruled school corporal punishment was constitutional, leaving the decision to permit it up to each state.

Missouri is one of the 19 states, mostly in the South, where corporal punishment is still allowed. Adjacent states that allow it include Arkansas, Kansas, Kentucky, Tennessee, and Oklahoma. Others are Alabama, Arizona, Colorado, Florida, Georgia, Idaho, Indiana, Louisiana, Mississippi, North Carolina, South Carolina, Texas and Wyoming.

The road to corporal punishment in Cassville started with an anonymous, third-party survey of school employees, parents and students.

All three groups identified student behavior and discipline issues as a high concern.

“We started generating ideas on what we could do and corporal punishment was one of the ideas,” he said.

Johnson said to his surprise, there was more interest than expected in what he called an “old-fashioned disciplinary measure.” 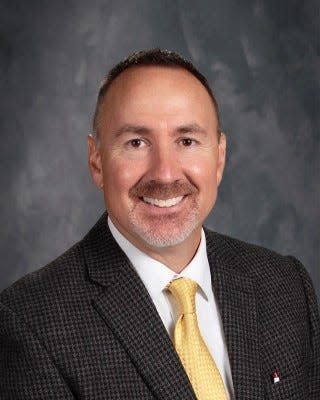 The district investigated that option along with two others, which were also implemented: The creation of a “Success Academy” for students who struggle in a traditional setting and a restriction on cellphones and other internet-ready devices at school.

In June, the Cassville school board approved a policy that allows the use of corporal punishment but only “when all other alternative means of discipline have failed and then only in reasonable form and upon the recommendation of the principal.”

The policy states: “When it becomes necessary to use corporal punishment, it shall be administered so that there can be no chance of bodily injury or harm. Striking a student on the head or face is not permitted.”

The only corporal punishment allowed is “swatting the buttocks with a paddle.”

Asked how many swings are allowed, Johnson said only one and possibly two for the younger students and up to three for the older students.

The policy also requires the principal who approved the corporal punishment to report the reason and details to the superintendent.

“No one is jumping up and down saying we want to do this because we like to paddle kids. That is not the reason that we would want to do this,” Johnson said.

But, he said, students respond in different ways to discipline.

Johnson said the district employs a wide range of disciplinary approaches starting with relationship-building and positive reinforcement for good behavior. Detention and in-school and out-of-school suspensions are also options.

“The positive reinforcement, we love it. That works with a lot of kids,” he said. “However, some kids play the game and their behaviors aren’t changing.”

He said the district hopes the possibility of corporal punishment is a deterrent.

“We understand that it is a bit of a shock factor,” he said. “So if there is one kid or a few kids out there that know…there might be a different type of discipline, it might change their behavior.”

At the end of the 2022-23 year, Johnson and his administrative team plan to look at what impact corporal punishment, the Success Academy and the cellphone restriction played in reducing student discipline.

“We go back to the drawing board every year and look at what our needs are and reassess and come back with something different, maybe, next year,” he said.

Claudette Riley is the education reporter for the News-Leader. Email news tips to [email protected]