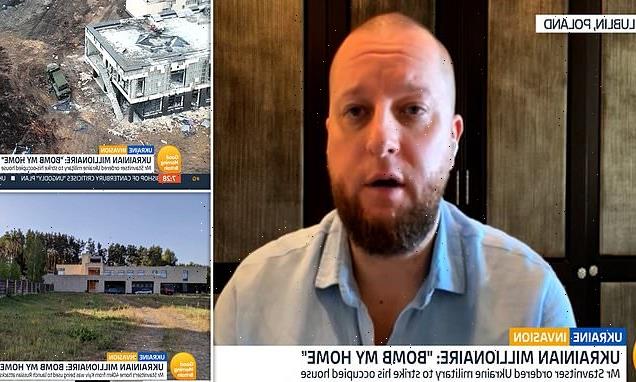 A Ukrainian millionaire contacted the military to bomb his own house after he spied Russian invaders using it as a military base to fire rockets into Kyiv on the webcam.

Businessman Andrey Stavnitser handed off coordinates to the house in the outskirts of the capital once he realised it was housing military targets, sacrificing the ‘beautiful’ home he had only just finished building to destroy 12 Russian vehicles.

‘It was kind of an obvious decision for me, there is not much you can do nowadays to help military, and that was one of the opportunities that I had,’ he told Good Morning Britain. 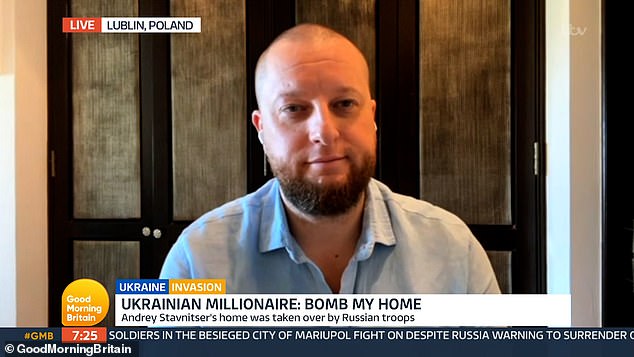 Andrey Stavnitser had only just finished building his home in Ukraine before it was invaded by Putin’s forces, who captured and interrogated his security team 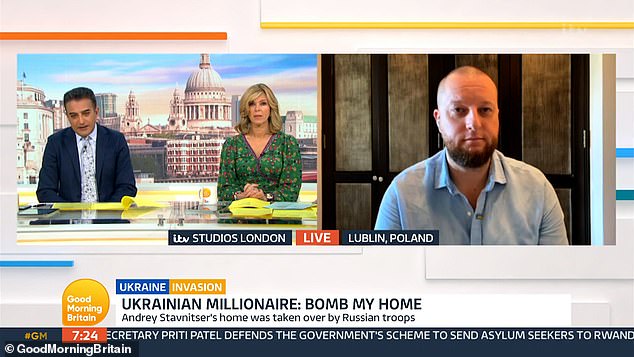 Stavnitser, who realised the troops were using his house as a base to launch rocket attacks in Kyiv, sent coordinates to the Ukrainian military and asked them to bomb his own home

Stavnitser had left security behind to guard his home, but the Russian forces captured and interrogated the security team after stripping them naked.

He later heard the Russians were looking for ‘Nazi messaging’ on their phones, which they destroyed after failing to find evidence of Nazification in Ukraine.

After a few days of capture, the Russian forces released the security guards, sending them out into the woods where they walked for days through the wilderness without being found. As their phones were destroyed, they were unable to contact anyone.

Eventually, they reached shelter, and soon got in contact with their employer – the man whose house had just been invaded. 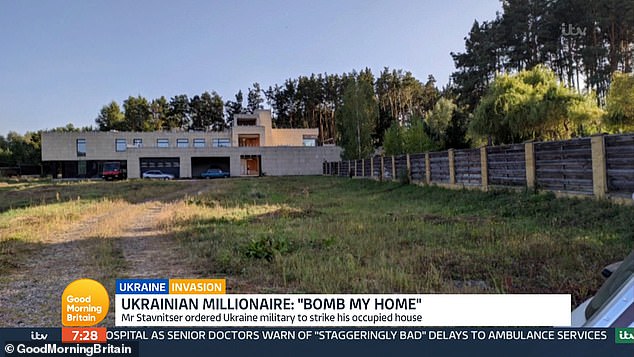 The Russians were using the house as storage for the other possessions they had stolen from the Ukrainian village, pilling up laptops and iPads as they looted the surrounding homes 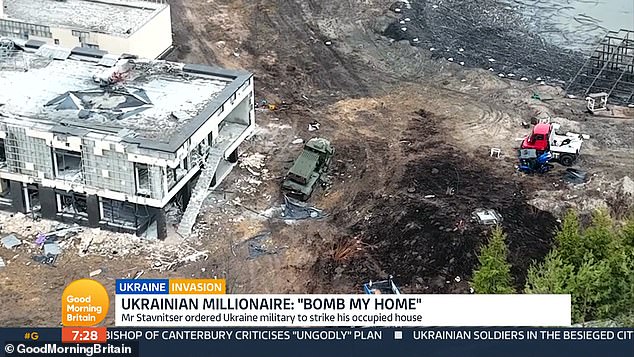 Although all other cameras in the house were disabled, the troops had missed a webcam which broadcast the fact that the home was being used by military targets back to Stavnitser

‘If you were to ask me two months ago, what would I feel if there were hostile military people inside my house, I would have said fury and anger,’ said Stavnitser. ‘However, this is not what I felt. I felt disgusted, dirty, looking at some guys walking inside my house.’

After speaking with his security team and hearing they had survived, the millionaire came up with an idea.

He began to check each camera in the house individually, but to his disappointment found most of them destroyed. But the Russians had missed one.

A small webcam was still operating, unbeknownst to the Russians, allowing Stavnitser to spy on the invaders now occupying his home.

What he saw was throngs of military uniforms. As well as taking his possessions, Russian troops were using it as a warehouse to store stolen good from neighbouring Ukrainians – piling TVs, laptops and iPads into the rooms.

To his horror, he saw military vehicles passing by a window, including a BM-21 Grad rocket launcher system.

With a range of 40 kilometers, he realised his home was being used as a staging ground to fire rockets into Kyiv and kill his fellow countrymen.

After that, he said the decision was simple. He passed the coordinated to the Ukrainian military and told them to attack. 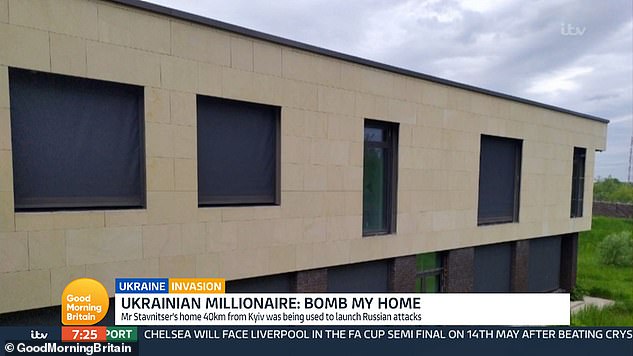 Stavnitser said it was a simple decision to tell the military to bomb the ‘beautiful’ home he had finished because ‘we are safeguarding Europe’, adding he wanted to do everything he could 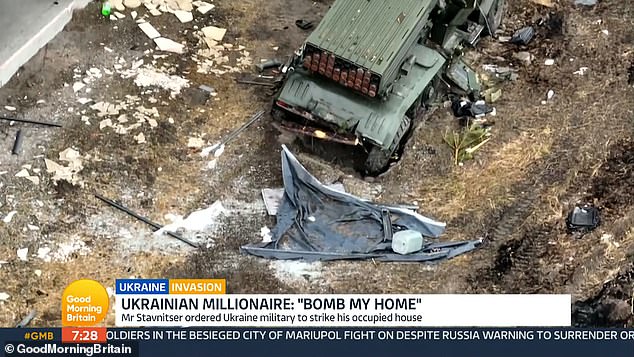 The air strike destroyed 12 military vehicles, including a BM-21 Grad rocket launcher system that could have been bombing Kyiv earlier in the invasion

He was able to count the destroyed vehicles from the webcam after the bombardment was over. Approximately 12 military vehicles were destroyed.

‘It’s not about money, it’s about effort put into the house,’ he added. ‘I just finished building it. It was a beautiful house, actually. [But] I want to do everything possible to help Ukraine win because we are safeguarding Europe.’

The millionaire knows the Ukrainian president Zelensky personally and had worked with him when the government was developing a Covid-19 strategy for the south of Ukraine.

He said he is proud to have a president like Zelensky and thanked Britain for its support during the war, calling on the country to ramp up its weapons shipments and military support for Ukraine.