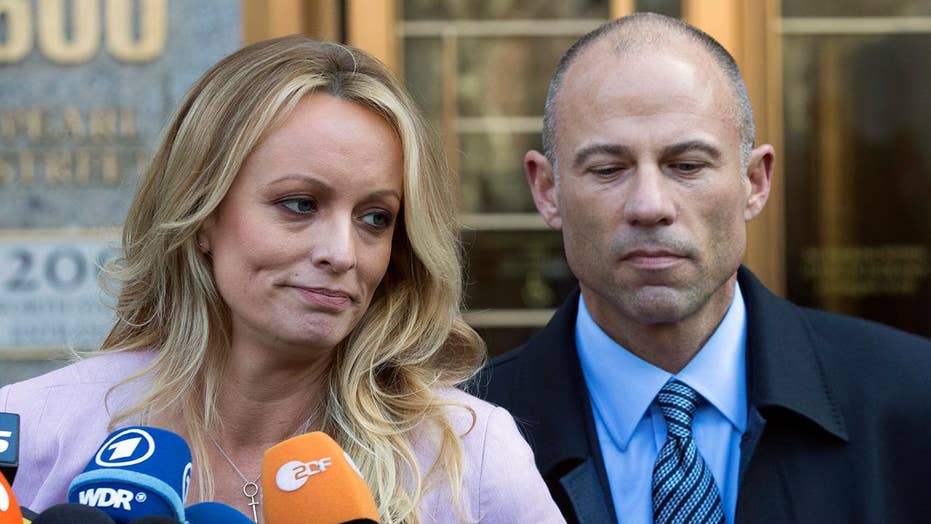 The rise and fall of celebrity attorney Michael Avenatti

Avenatti became a household name thanks in no small part to his endless exposure on CNN and MSNBC; Fox News media analyst Howard Kurtz reports.

Embattled attorney Michael Avenatti will have a busy day in Manhattan federal court Tuesday afternoon — but as a defendant, not as counsel.

Avenatti repeatedly has denied any wrongdoing and is expected to plead not guilty to all charges. He initially was arrested on March 25 at a New York law firm where he had scheduled a meeting with Nike executives.

Six days earlier, prosecutors said, Avenatti and a co-conspirator identified by several news outlets as celebrity attorney Mark Geragos met with attorneys for Nike on March 19 and "threatened to release damaging information" if the company did not agree to make multi-million dollar payments to them, as well as an additional $1.5 million payment to a California youth basketball coach Avenatti claimed to represent.

How the media enabled Avenatti

According to the government, Avenatti threatened to hold a news conference on the eve of Nike's quarterly earnings call and the start of the NCAA tournament to announce allegations of misconduct by Nike employees, at one point telling Nike's lawyers he would "take ten billion dollars off your client's market cap… I'm not f—ing around."

Avenatti was indicted formally in the Nike matter this past Wednesday. That same day, prosecutors indicted him in the Daniels case, in which they claimed Avenatti stole two payments totaling $297,500 from an advance Daniels was supposed to receive from a book deal in the summer of 2018.

Court documents said Avenatti gave Daniels' literary agent a doctored letter with her signature directing the agent to divert the money to an account controlled by Avenatti. The lawyer then allegedly spent the money "on airfare, hotels, car services, restaurants and meal delivery, online retailers, payroll for his law firm and another business he owned, and insurance."

The indictment said that after Daniels asked Avenatti why she had not received the first payment, Avenatti falsely claimed he was still trying to extract the money from the publisher. Weeks later, the lawyer allegedly "used funds recently received from another source" to pay Daniels the amount she was owed — $148,750.

Soon after, prosecutors said Avennatti received another payment of $148,750 from Daniels' agent and used the money on personal expenses, including a lease payment on a Ferrari. When Daniels asked for the remaining money, Avenatti allegedly misled her to believe that the book's publisher was refusing to pay the amount to Daniels' literary agent.

Avenatti's legal issues have been daunting, but his troubles are not limited to New York.

In March, federal prosecutors in Southern California accused Avenatti of committing bank fraud and wire fraud by embezzling settlement money from five clients, including a paraplegic man, to pay personal expenses and debts — as well as those of his coffee business and law firm.

If convicted of all 36 counts in the California case, Avenatti faces up to 335 years in prison.