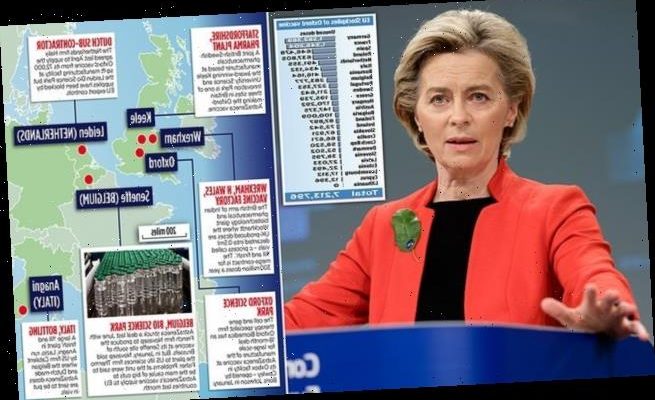 Britain was last night on the brink of a vaccine war with the EU – as the UK smashed its record for the number of daily inoculations.

In a dramatic move, European Commission President Ursula von der Leyen threatened to join forces with the French and German governments to hold hostage more than 19 million doses of the AstraZeneca vaccine due to be shipped to the UK over the coming weeks.

The extraordinary development came as the EU faced criticism over the glacial speed of its vaccination programme and many of its members were plunged into fresh lockdowns as Covid-19 cases soared.

Meanwhile, the UK delivered 711,156 jabs in 24 hours – a new record that means more than half of all adults have had at least one vaccine dose.

Boris Johnson hailed the success by tweeting: ‘Many thanks to everyone involved in this fantastic achievement. Let’s keep going!’

Brussels claims AstraZeneca has delivered only a third of the 90 million vaccine doses that it promised to the EU during the first quarter of this year, but has met its contract to supply the UK in full. 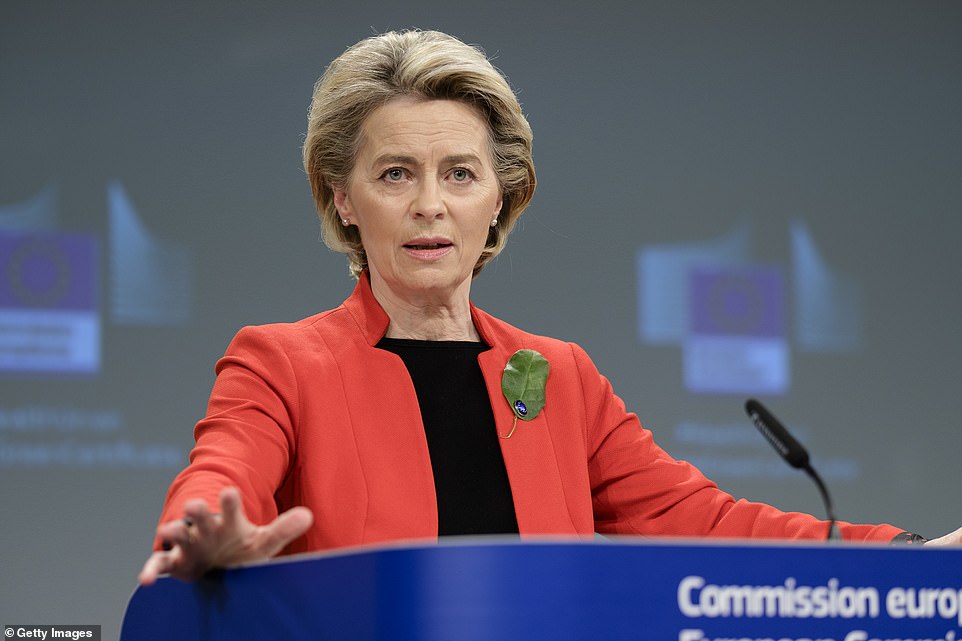 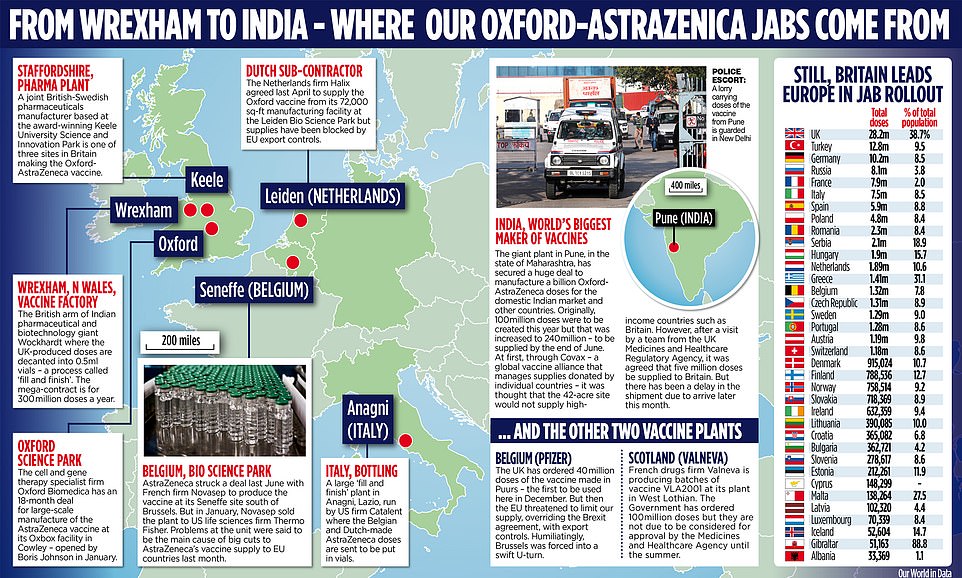 An irate Ms von der Leyen said the bloc reserved the right to hit back by banning the export of batches made by the Anglo-Swedish pharmaceutical giant to the UK. They account for around 20 per cent of Britain’s future supplies.

The explosive plan will be discussed at a European Council summit on Thursday, but already has the backing of French President Emmanuel Macron and German Chancellor Angela Merkel.

But a senior British Government official last night warned any such move would be illegal. ‘The reality is our contract with AstraZeneca is rock-solid and better than the EU’s,’ said the official. ‘And we’re only getting what we helped to develop and paid for.’

The EU’s disastrous vaccine rollout means barely 12 per cent of adults in France, Germany and Italy have so far had jabs. Swathes of Europe are now in lockdown, with almost three-quarters of the EU’s 27 member states suffering spiralling Covid-19 infection rates.

Britain’s reliance on imports is also set to be reduced as an Oxford factory able to produce up to 70 million doses in under six months is ready to open a year ahead of schedule.

The dire situation in Europe has put the summer holiday hopes of millions of Britons into doubt.

Government scientists fear travellers could bring the mutant South African strain into the UK while Health Secretary Matt Hancock has privately confided his growing pessimism about foreign trips resuming after May 17, the earliest date on the Prime Minister’s roadmap out of lockdown.

In other developments yesterday:

lPositive Covid tests fell 7.5 per cent over the past seven days to 5,587 a day; hospital admissions fell 23 per cent to 496 and deaths dropped by 36.9 per cent to 96, the first Saturday with under 100 fatalities since October;

lPlans for ‘Alfresco April’ gathered pace with Marston’s brewery saying 700 of its pubs would open on April 12.

lJapan announced that in a ‘great sacrifice’, international fans would be barred from attending the Tokyo Olympics later this year;

lA Mail on Sunday investigation has named super-rich tycoons – including heirs to the Gucci fashion and Graff diamond fortunes – whose firms have used the taxpayer-funded furlough scheme to pay staff;

lThousands of anti-lockdown protesters marched through London with police making at least 13 arrests.

The renewed threat from Ms von der Leyen came in an interview with the German media group Funke. She admitted discussing the ‘option of banning a planned export’, adding: ‘That’s the message to AstraZeneca: you fulfil your contract with Europe first before you start supplying to other countries.

‘We have received nothing from the British, while we are supplying them with vaccines.’

Her hardline approach won support from France’s European Affairs Minister Clement Beaune, who said: ‘We need a principle of reciprocity: supply others if they supply us in accordance with signed contracts.’ The position is also backed by Italy and Denmark, but opposed by the Netherlands, Belgium, Poland, Sweden and Ireland who fear the wider impact of a vaccine trade war.

Klaus Hinterding, deputy head of AstraZeneca Germany, said that the shortages were ‘due to the complexity of the production process’. The active ingredient in the vaccine is made in Belgium and the Netherlands and placed into vials in Italy. 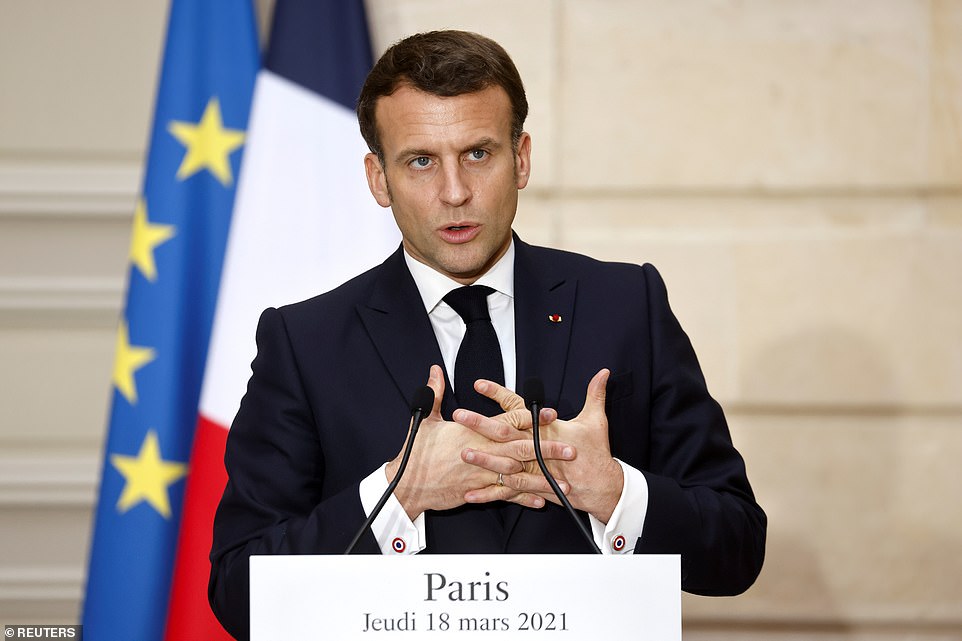 Brussels claims AstraZeneca has delivered only a third of the 90 million vaccine doses that it promised to the EU during the first quarter of this year, but has met its contract to supply the UK in full. Pictured: French President Emmanuel Macron 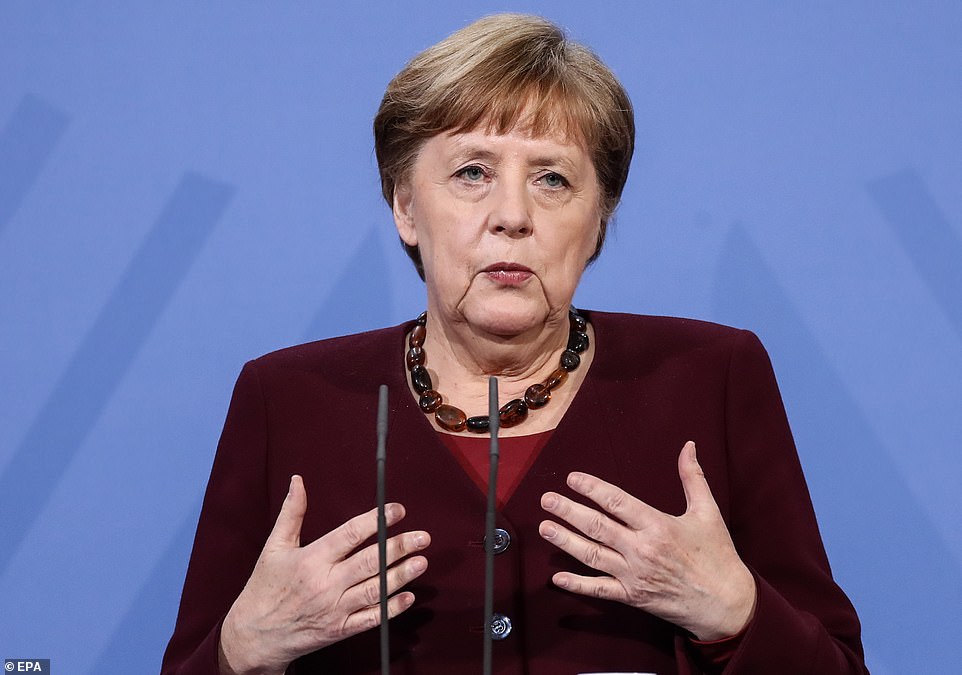 The EU’s disastrous vaccine rollout means barely 12 per cent of adults in France, Germany and Italy have so far had jabs. Pictured: German Chancellor Angela Merkel 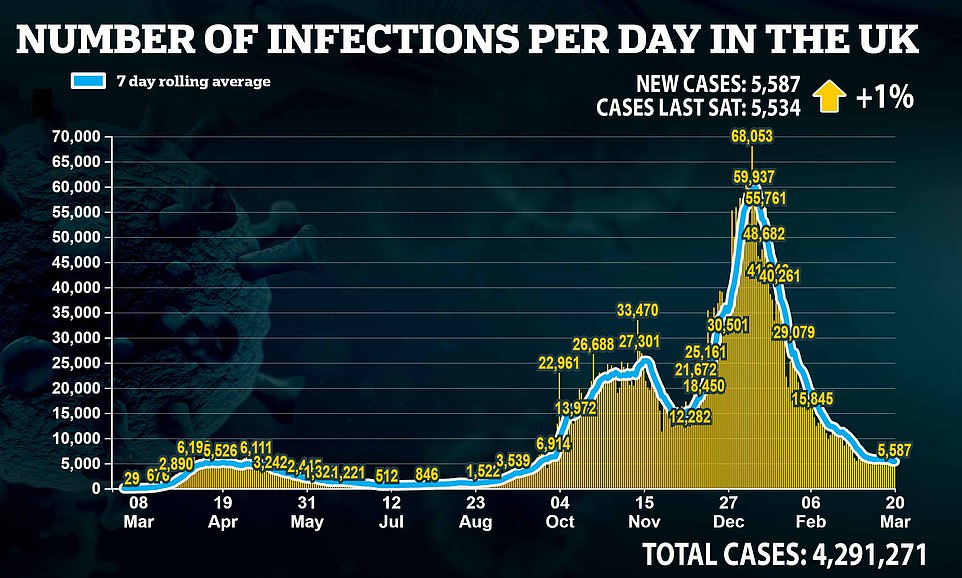 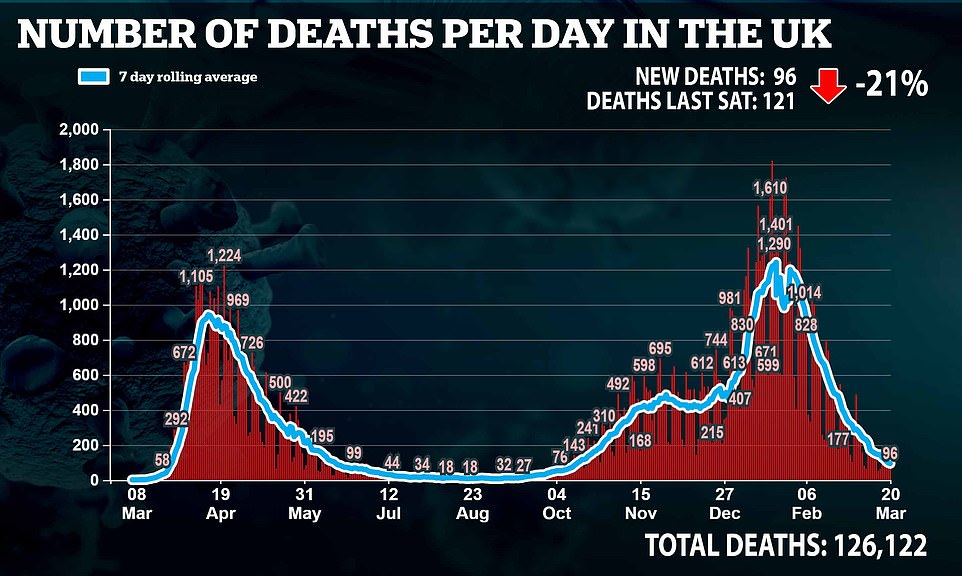 Pfizer warned the EU not to seek to block the movement of its supplies. A spokesman said: ‘We have been clear with all stakeholders that the free movement of goods and supply across borders is absolutely critical to Pfizer and the patients we serve.’

The threat comes after several EU countries suspended use of the AstraZeneca vaccine due to fears that it might cause blood clots. The European Medical Agency regulator declared it ‘safe and effective’ on Thursday but France is still refusing to administer it to people under 55 – having previously claimed it was not suitable for over-65s. 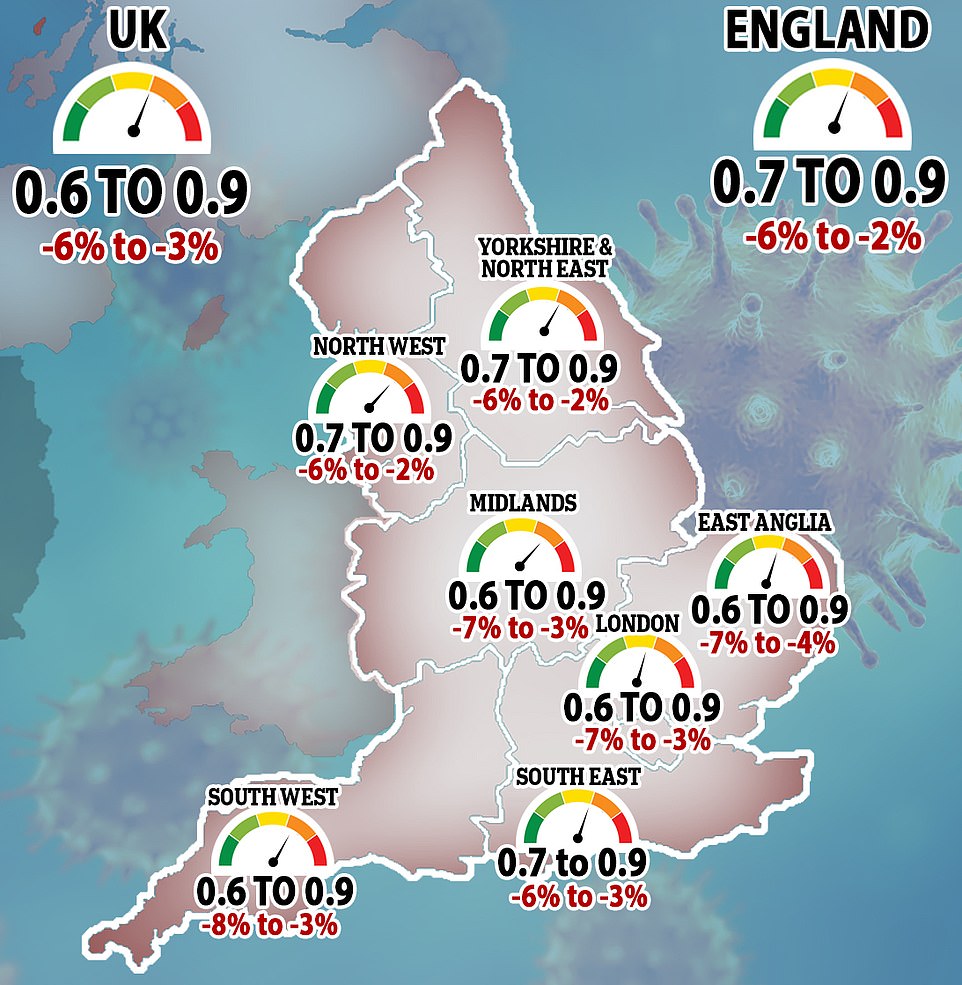 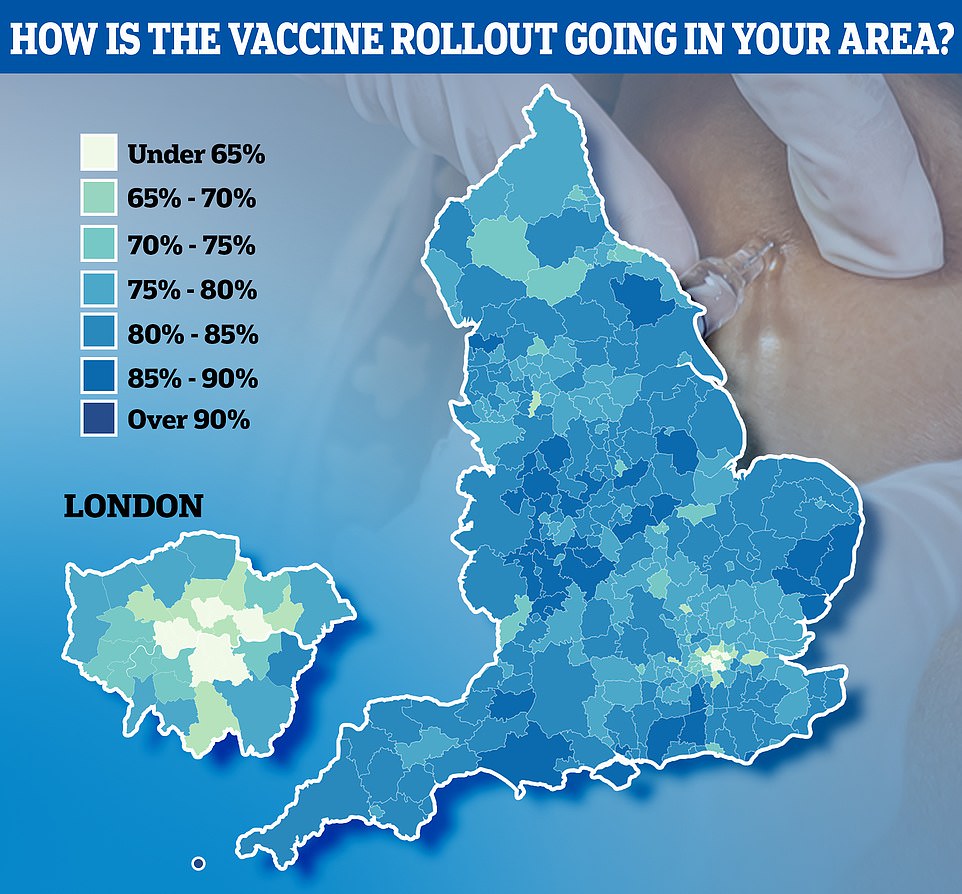 NHS England figures show 79 per cent of over-55s in the country had at least one dose of the vaccine by March 14, but London is significantly lagging behind in uptake 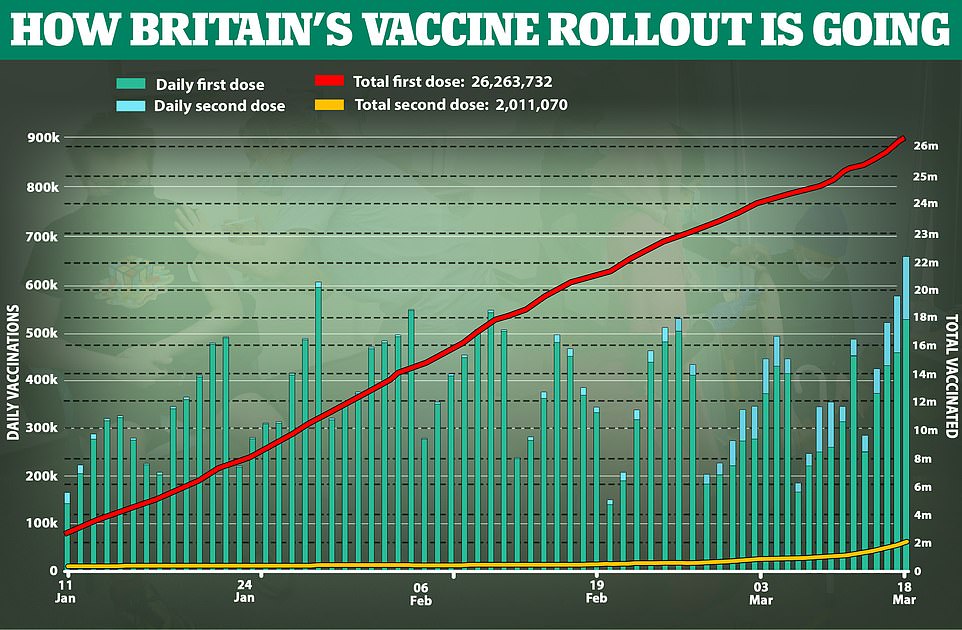 Some 26.2million Britons have now received their first dose of a Covid-19 vaccine, the equivalent of half the adult population in Britain, and 2million have received both injections

There are fears that European scare stories may dissuade people in Britain from getting vaccinated.

A Government source said No 10 was willing to sacrifice holidays abroad to protect domestic reopening. There had been hope that a roadmap for holidays, due to be released on April 12, would allow trips from May 17, but sources said Ministers were ‘increasingly sceptical’ about restrictions ending that month, with even early summer looking unlikely.

There are particular concerns about the spread of the South African variant in France, now estimated to account for about 5 per cent of cases. One Tory MP said: ‘If it’s got a hold in France, you can guarantee it will have a hold in the UK. The big question is, ‘Could this new variant kill foreign holidays?’ It’s not about the variant coming from South Africa itself – it’s the French connection.’

Downing Street is understood to be concerned about a repeat of last summer when tourists returning from Greece, Croatia and Spain are believed to have brought back a Covid variant.