Married man, 44, hanged himself in garage during drunken video call with another woman… before she alerted police who knocked on his front door leading to his wife discovering body

A married man hanged himself during a video call with another woman at his home while his wife was just yards away in another room.

Renata Palmer, wife of 44-year-old Robert, only found out her husband had died after a policeman knocked on the door, having been alerted by the other woman on the live call.

She led the officer to the garage at their home in Aylesbury, Buckinghamshire where she found her husband’s body four hours after his death. 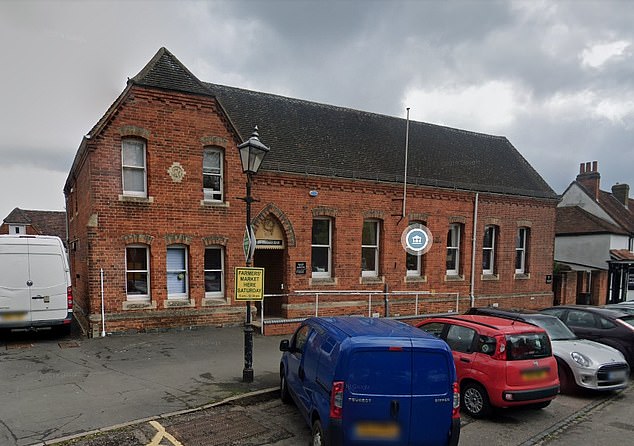 Renata Palmer, wife of 44-year-old Robert, only found out her husband had died after a policeman knocked on the door, having been alerted by the other woman on the call, Beaconsfield Coroners Court (pictured) heard

The detective who investigated Mr Palmer’s death was stopped in his evidence by coroner Crispin Butler, who said he was instead going to briefly summarise what the officer had written in his statement due to its graphic content.

The inquest in Beaconsfield, heard that tanker driver Mr Palmer had drunk ‘significant quantities’ of alcohol before his death and that he had ‘relationship issues’.

Mr Butler said of video call between Mr Palmer and the third woman: ‘It seemed to be going on in his garage on that afternoon, sadly, with his wife completely unaware. The cause of death was one of hanging.

‘He had consumed a significant quantity of alcohol at the time of death. There were relationship issues, particularly in indications that he made to the third party.’

Mr Butler summarised a statement from Mr Palmer’s wife about the incident.

It read: ‘He was a very private person. I was not aware of any depression. Police knocked on my door at around 3:00 on May 30 asking for Robert.

‘I said he was in the garage. I went after him. We found him there. It was a shock, I almost fainted.’

Mr Butler urged the police officer testifying to treat all the details with caution.

‘Let us remain sensitive to the relationship issues that were going on,’ he told the officer.

The sole witness, Detective Constable Nicholas Widdison, said: ‘Robert was a tanker driver. He returned home on that day at 11:00 am.

‘He was last seen by his wife at approximately 12:00 because she went to the garage to tell him she had friends coming around.

‘Renata did say it was not unusual for him to spend significant amounts of time in the garage.

‘The next significant time is 15:24, when the police received a 999 call from a relative of the person with whom Robert had been communicating.

‘They had received a video from Robert in which he was hanging himself. She physically saw him hanging himself. The messages seem to escalate quite quickly, with multiple individuals involved.’

The coroner, summarising DC Widdison’s evidence, said: ‘There is clear evidence that although Robert had consumed alcohol at the time, he was making it clear that he was doing an act intending to end his life.

‘He wasn’t intending to be saved here at all.’

Mr Butler recorded the death as suicide by hanging.