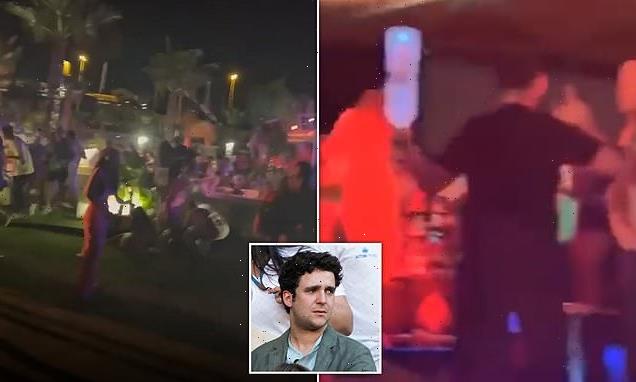 Marbella club shooting broke out in front of terrified nephew of Spain’s king after Irish reveller ‘was thrown out of VIP area, returned with a knife and stabbed gunman who shot him and three others’

The nephew of the King of Spain was among terrified revellers who were caught up in a nightclub shooting after a gunman went on the rampage wounding four people in Marbella.

Felipe Juan Froilán, nephew of Spanish King Felipe VI, was partying with friends in celebration of his 24th birthday in the well-known Costa del Sol nightclub Opium Beach Club last night when the chaos kicked off.

The royal found himself and his friends hiding behind chairs fearing that a terror attack was in process when gunshots rang out above the music and people started fleeing.

A fight had broken out in the VIP lounge a little earlier at around 1am – early in the night by Spanish time – and police sources said an Irishman involved in an altercation with a Dutchman was escorted out of the discotheque by bouncers.

The Irishman then manages to return to the VIP lounge to confront the Dutchman again, this time with a knife, prompting the Dutchman to draw his gun and fire in the crowded nightclub.

The shooter hit the Irishman in the chest and three other people, and suffered stab wounds to his eye, forehead and neck.

All five injured people are in hospital in serious condition.

Footage shared online shows trouble brewing among party-goers in the VIP section, before the shooter took out his gun, causing a huge stampede as revellers desperately fled the venue in chaotic scenes. 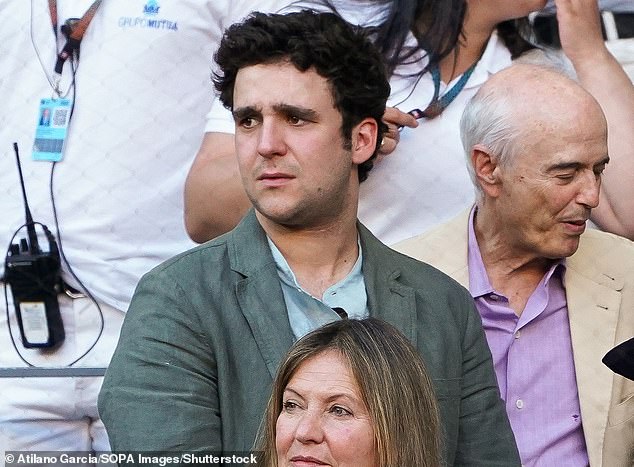 At the club last night was Froilán de Marichalar, the nephew of the Spanish King Felipe VI, who was celebrating his 24th birthday (pictured in May) 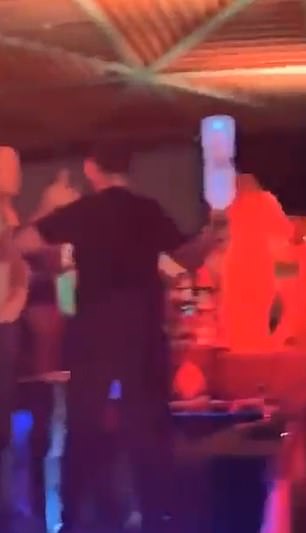 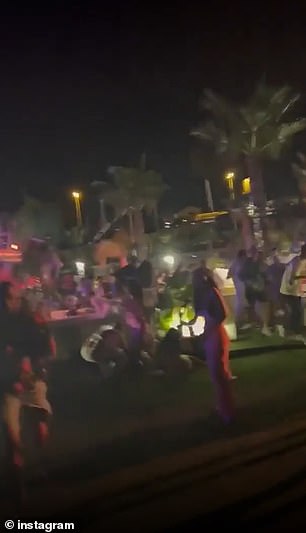 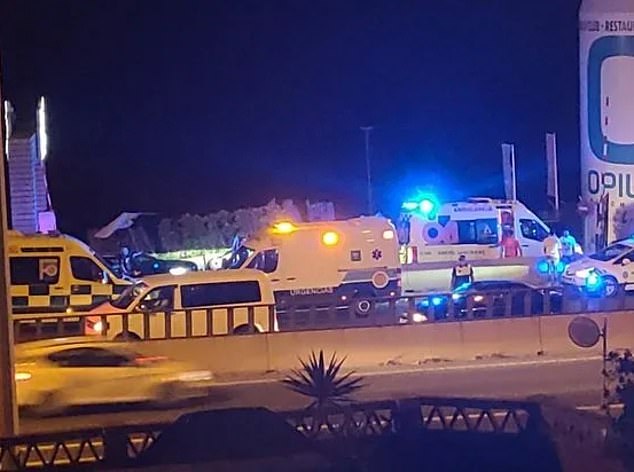 The shootings took place in the early hours of this morning at Opium Beach Club, a club popular with British tourists 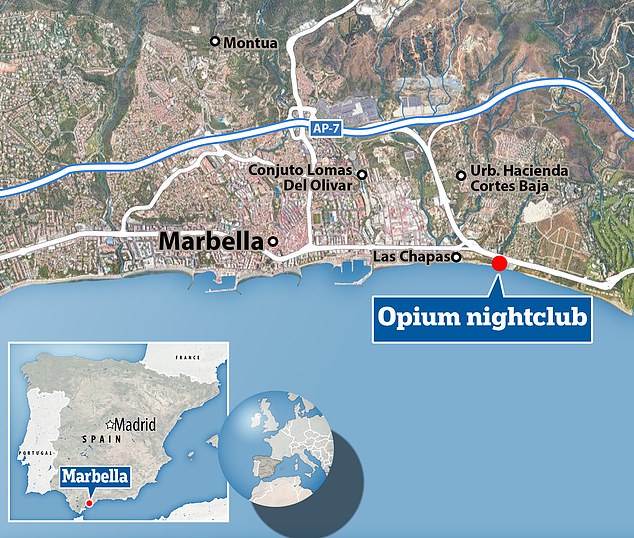 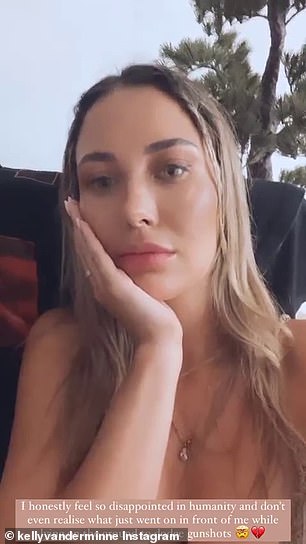 Security staff moved in rapidly to disarm the gunman before anyone else could be hurt.

Dutch Love Island star Kelly van der Minne was also partying there and the influencer described the moment a woman on the table next to her was shot in her backside.

She told her 100,000 followers as she walked home from Opium: ‘I’m not joking, I was at the club Opium in Marbella and someone just got shot, a girl at a table next to us just got shot.

‘This is like the craziest thing that’s ever happened, what the f***.

Police received a call about the violence at 1.10am.

The shooting is believed to have occurred during a fight between two groups of revellers in a VIP area of the beach club after a man was thrown out moments earlier by bouncers.

He is understood to have returned not long after to confront the gunman, who reacted by pulling out a pistol after being knifed and missing his intended target as he fired the weapon.

One man could be seen grabbing a giant bottle of Belvedere Vodka and swinging it round his head while another took his shirt off as if he was preparing for a punch-up before the shots rang out.

A man heard shouting just before shots rang out appeared to be talking in French.

Another was heard yelling over and over: ‘What the f***’ as revellers tried to flee, although English did not appear to be his first language.

One man was then heard saying: ‘I heard gunshots.’ 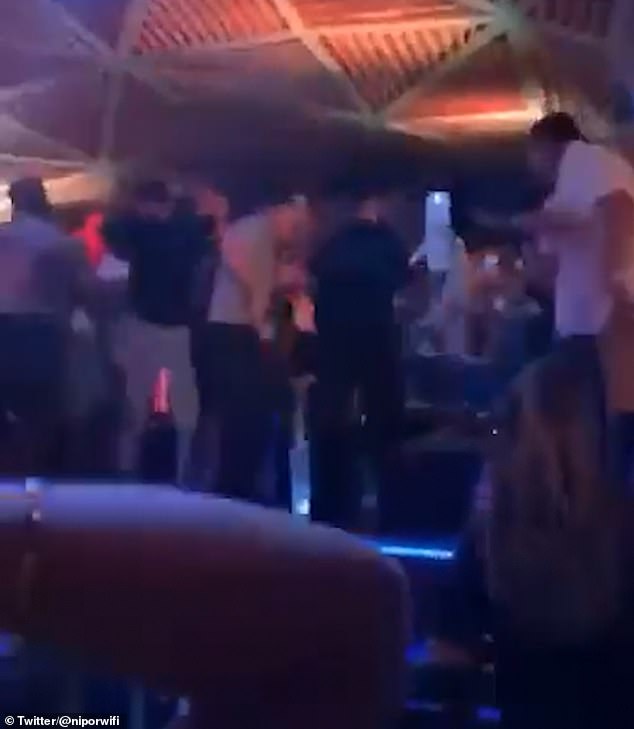 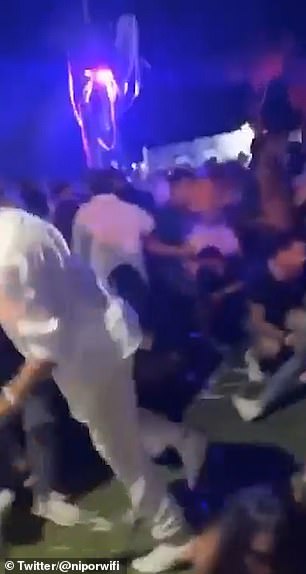 A police source said: ‘One of the four people who suffered gunshot wounds is an Irish man. He is the most seriously injured of the gunshot victims. He suffered a gunshot wound to the chest.

‘The gunman who has been arrested and suffered stab wounds is a Dutch national. ‘The other gunshot victims were shot in the backside, leg and shoulder.’

All of the other shooting victims remain in hospital and their conditions are not yet clear.

A neighbour living near the venue told a local paper: ‘I couldn’t sleep because of the noise of the music and suddenly I heard four shots.

‘I looked over my balcony because I knew straight away it wasn’t the sound of fireworks like other nights.

‘That’s when I saw a lot of people running out of the venue.

‘Police and ambulances began arriving very quickly. I counted 18 police vehicles and at least three ambulances but I think one had already left with the most seriously injured casualty.’

South African DJ Black Coffee, whose real name is Nkosinathi Innocent Maphumulo, was among those due to perform at Opium Beach Club last night. 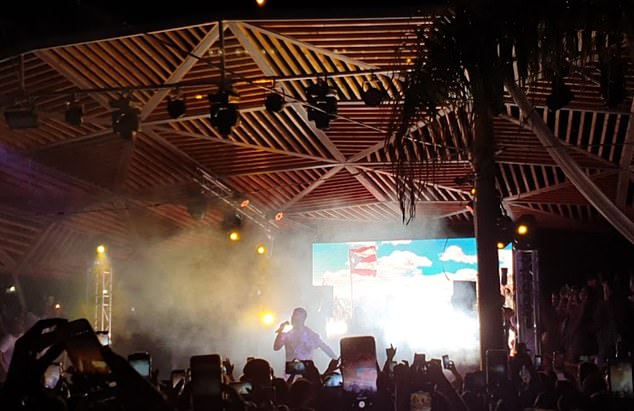 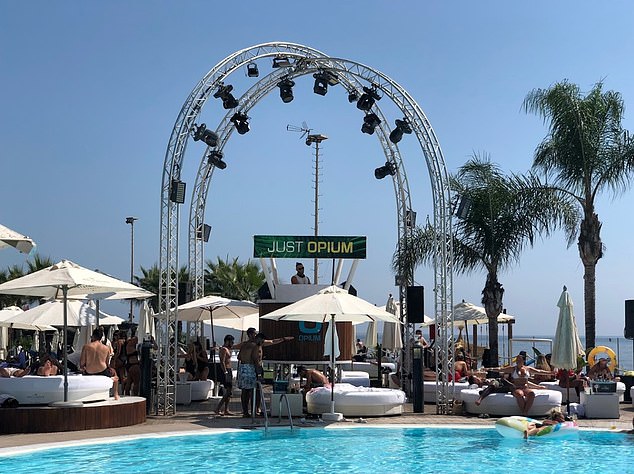 South African DJ Black Coffee, whose real name is Nkosinathi Innocent Maphumulo, was among those due to perform at Opium Beach Club last night which also has a beach club (pictured)

A British expat who was among the revellers said: ‘There was an initial problem in the VIP area which the bouncers sorted and led to one person being taken away.

‘The shooting occurred during a second incident about ten minutes later.

‘They were swinging around those massive bottles of Belvedere Vodka and the bouncers charged back to try to sort it out and that’s when the shooting started.

‘I was with my husband and he just flung himself on top of me because at one point the gunman seemed to be shooting out into the crowd.

‘There was a real mad panic and everyone just rang for the exits. It was all very confusing.’

Opium is a popular venue just outside Marbella town centre overlooking the sea off the dual-carriageway running from the resort eastwards towards Fuengirola.

The beach club boasts on its website: ‘From our legendary day-parties by the sea, in which our DJs perform live music, to the spectacular concerts that enlighten starry nights, Opium Beach Club Marbella stands out as the place to be and an international entertainment reference.

‘We are permanently seeking to bring out joy, energy, and authenticity to help create the best summer memories.’

One source said: ‘The bouncers are understood to have thrown out a man who had been involved in an altercation and that man is believed to have returned with a knife and gone for the gunman who he had previously had a fight with.

‘Police are working on the theory the gunman reacted by getting out the weapon he was carrying and trying to shoot him after being stabbed, but he missed his target and instead shot four other people.’

It was not immediately clear if those revellers shot had been involved in the initial fracas, although at least one has been described as an innocent bystander who had played no part in the violence that led to the multiple shooting. 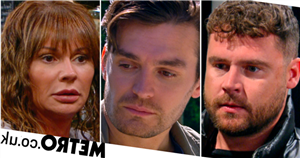 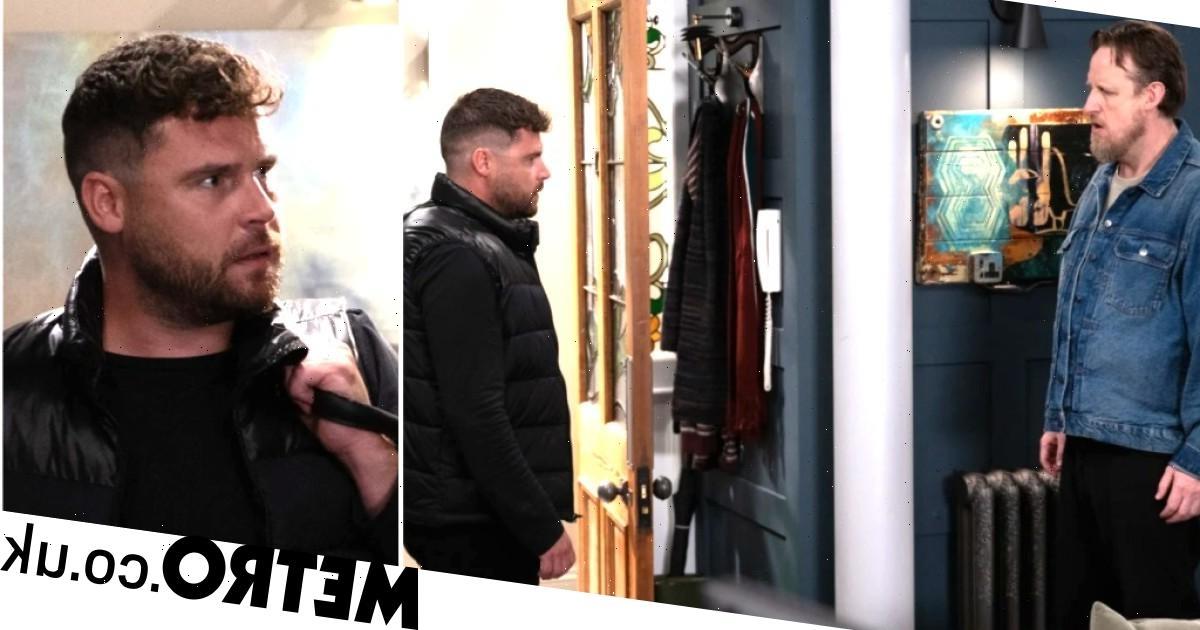 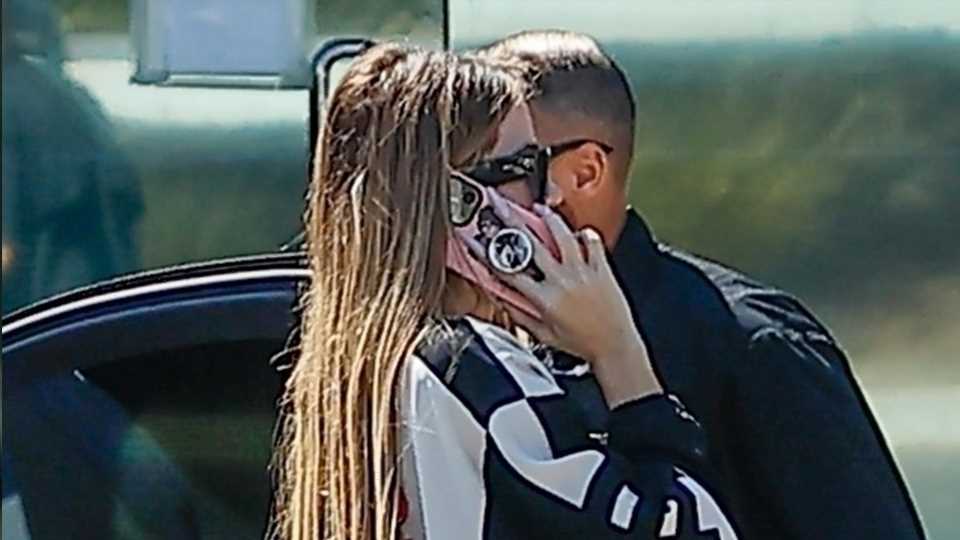 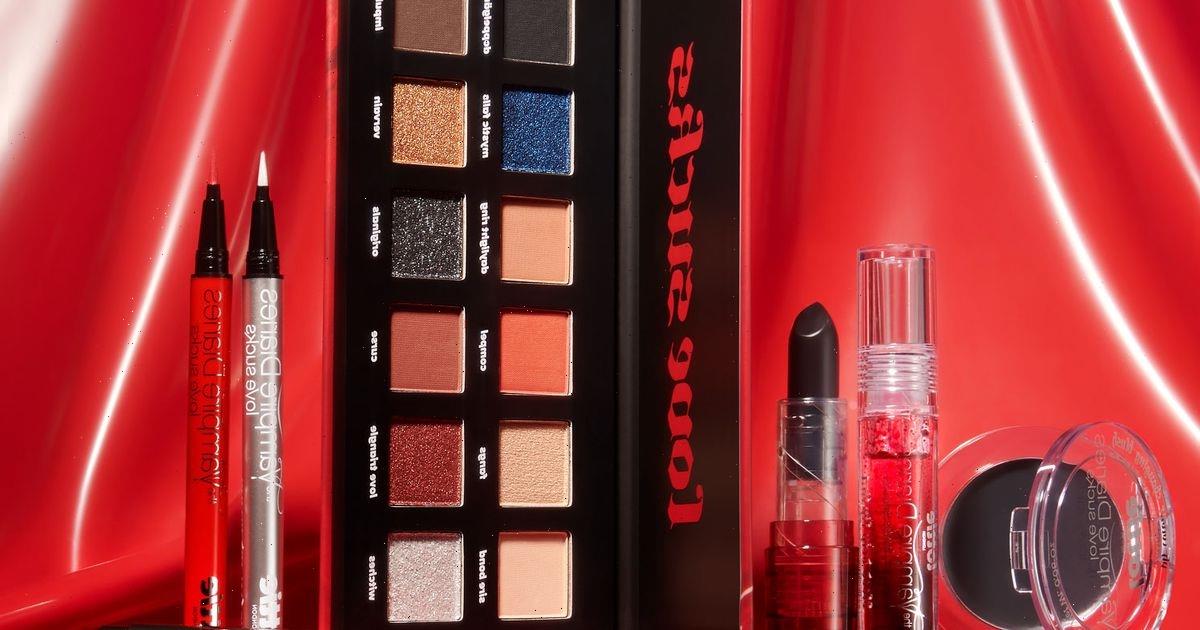 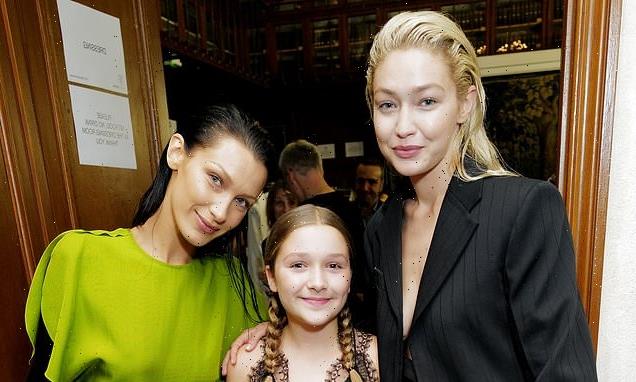 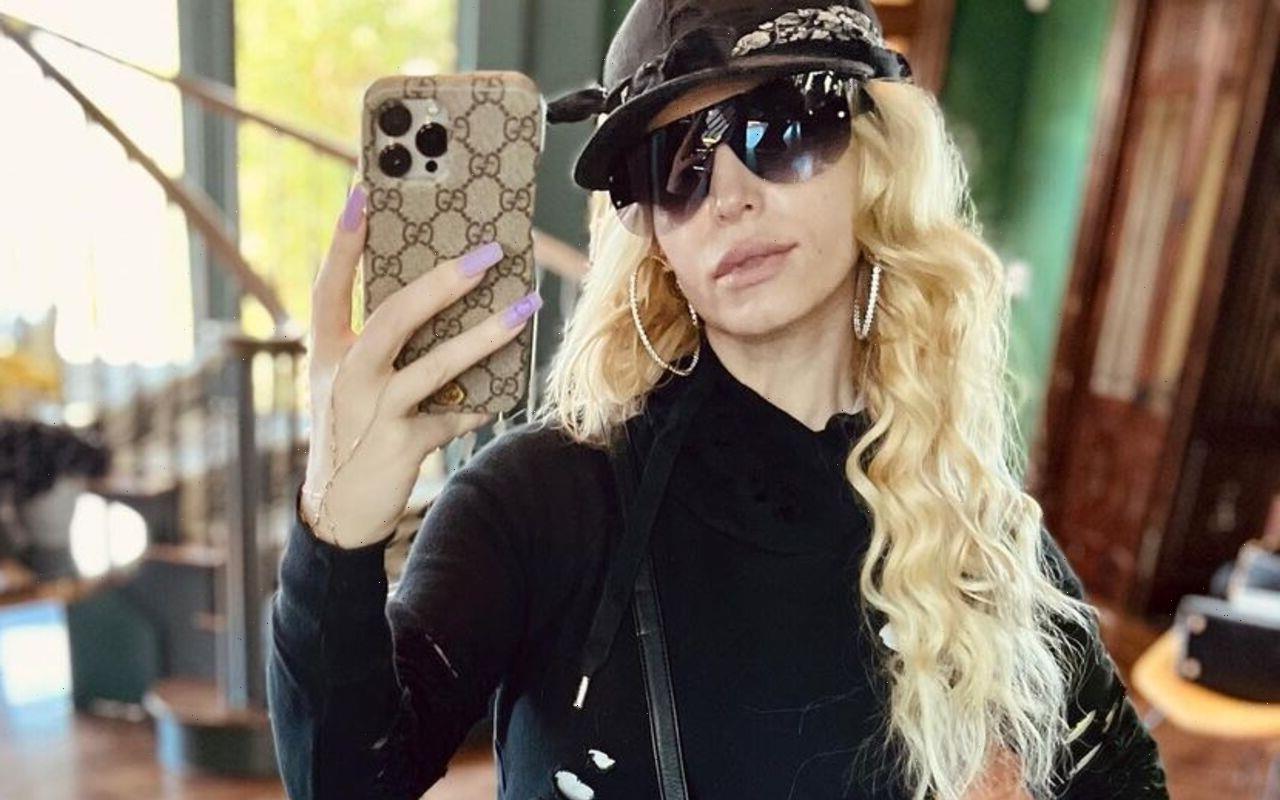 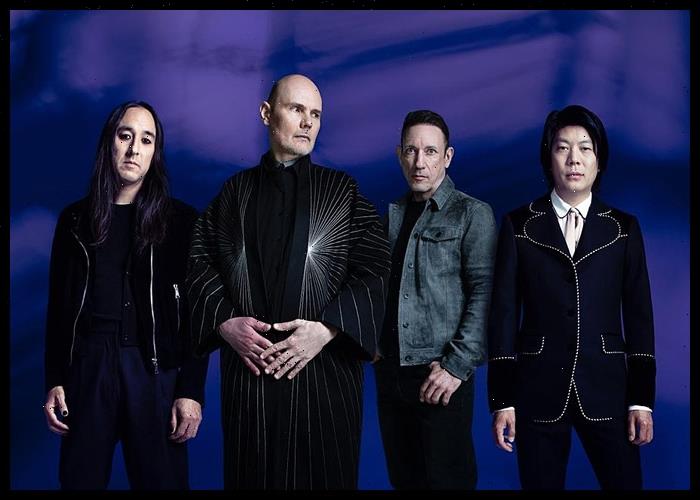