Just 50,000 Tube passengers can board every 15 minutes: Leaked report exposes chaos ahead as social distancing cuts capacity by 85% – meaning 1.3m hourly commuters will be reduced to 200,000

A leaked report by Transport for London bosses today revealed how the Tube will be unable to cope with social distancing measures and would have to run at 15% capacity if passengers are forced to remain two metres apart.

Under a two-metre social distancing rule on carriages and platforms, the Underground will only be able to accommodate 50,000 passengers boarding every 15 minutes – a massive reduction on the 320,000 people every 15 minutes during normal peak times.

That would make the networks maximum capacity 200,000 people boarding trains an hour – against 1.3million an hour in normal peak times.

According to the report, seen by the Evening Standard, even one metre social distancing guidelines would reduce the Tube’s capacity to 80,000 passengers every 15 minutes.

The report paints a bleak picture of the prospects of the capital’s economy bouncing back, with militant union bosses already hell-bent on using the crisis to extract concessions from Sadiq Khan.

Unions including RMT are refusing to let more of their workers return, which would increase potential for social distancing. The three main rail unions said: ‘We will not accept new working patterns that put the lives of railway workers and passengers at risk.’

Under the government’ road map for getting Britain back to work, public transport stations would have two metre markers to keep social distancing, with one-way systems to prevent unnecessary contact. 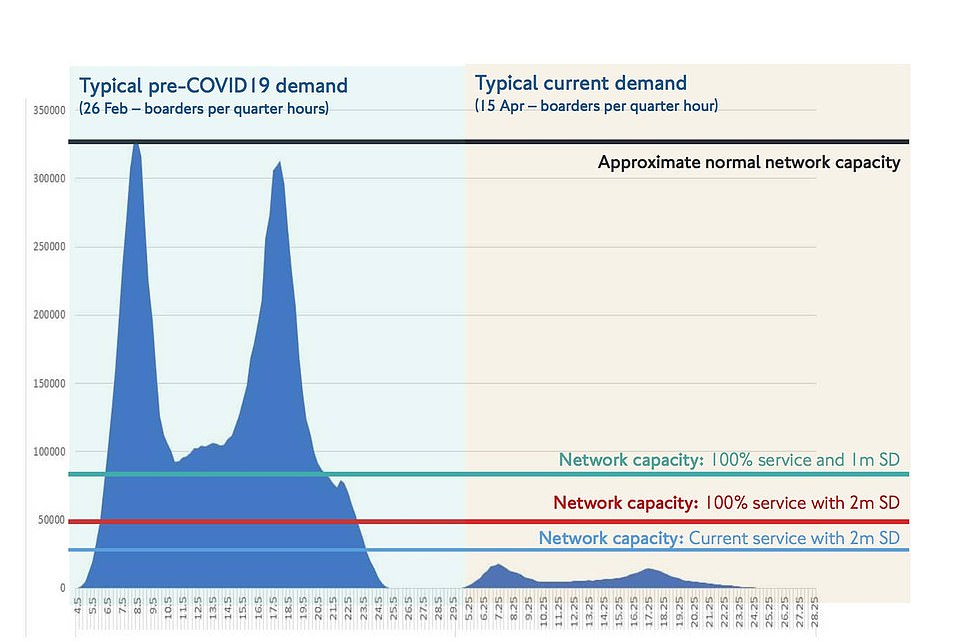 According to TfL data, the tube could only carry 15% of rush hour passengers under social distancing 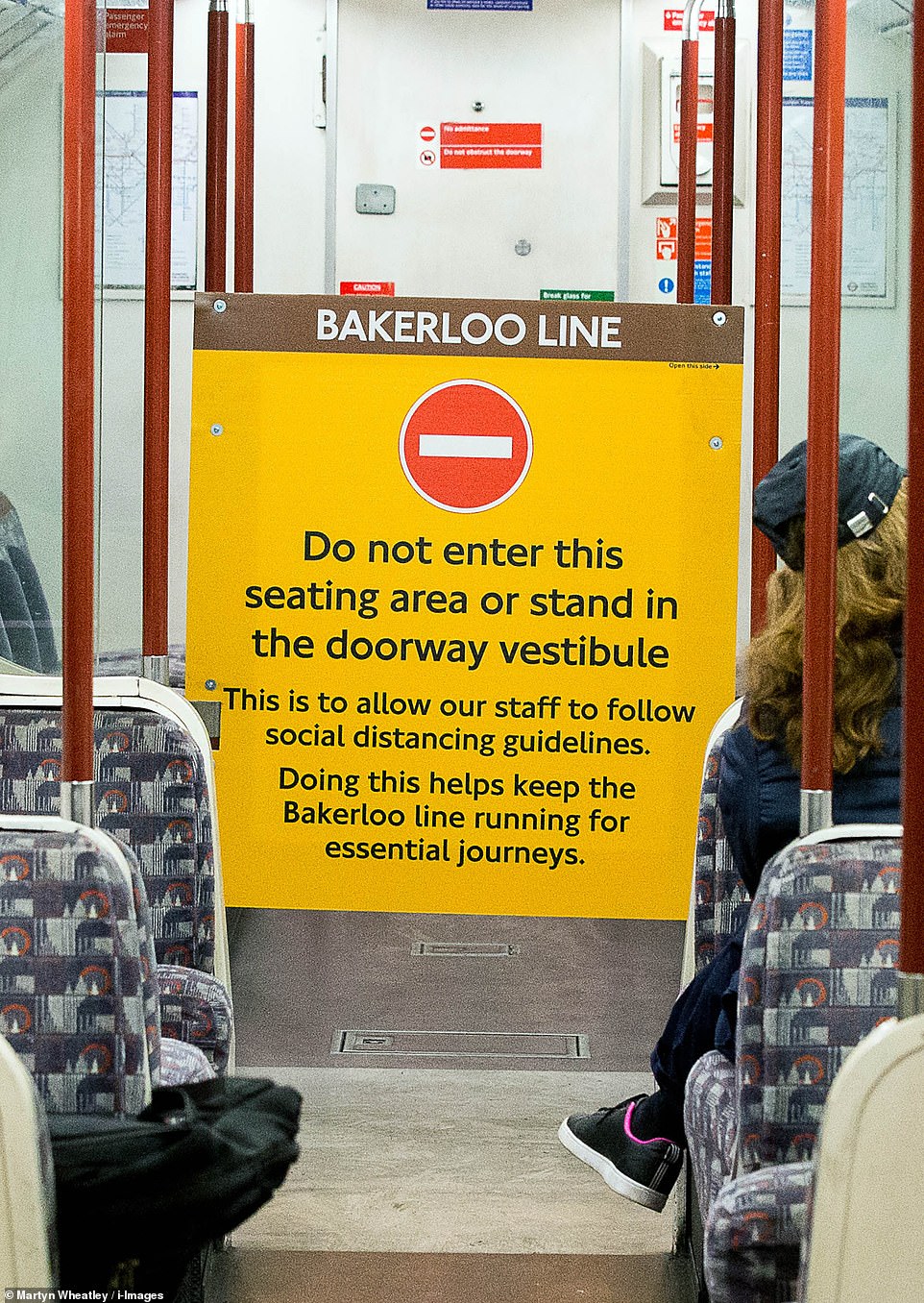 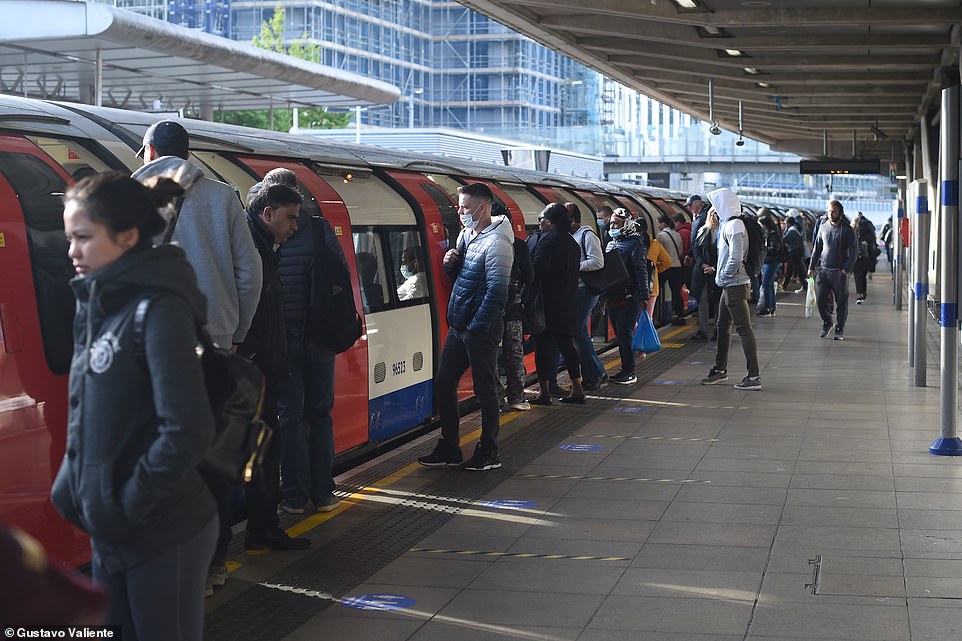 Commuters board the Tube at Canning town this morning. They would fall 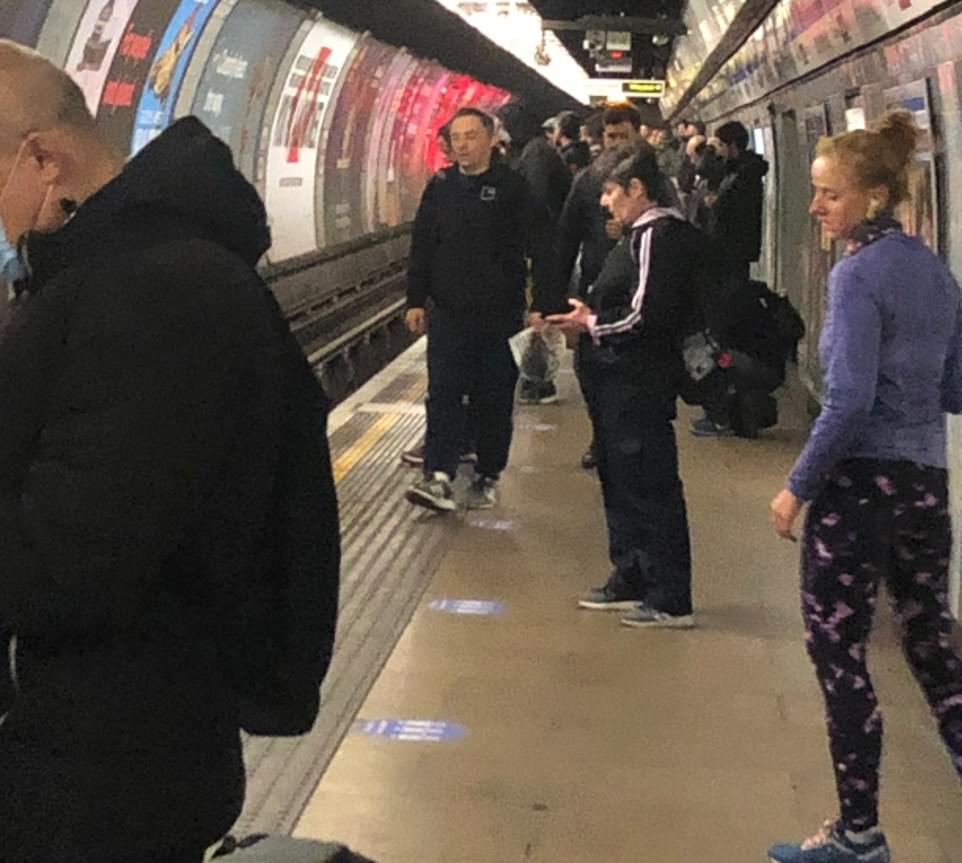 The UK’s three biggest rail unions have written to Boris Johnson warning that increasing train services to normal levels from May 18 will be ‘dangerous and lead to the public flouting the rules’. But the millions of Britons who have either been furloughed, had pay cuts or have been forced to shut their business are desperate to get back to work again.

There is also growing anger among private sector bosses who see the unions’ invention as a form of blackmail as they try to use the current turmoil as a chance to push through pay rises for their public sector members.

Sadiq Khan has claimed that Transport for London needs four weeks to prepare for lockdown easing – because it has furloughed 7,000 staff and up to a third of workers have been in self-isolation through the crisis.

But experts fear that ‘coronaphobia’ in the population could hamper efforts to get the economy running again, with polls showing significant numbers would be nervous about returning to work without a fully functioning public transport system.

TfL has not responded to fears about how it will cope with the demand and police rush-hour queues.

Before the pandemic hit the UK, there were around five million Tube journeys on weekdays but passenger numbers have gone down between 85 per cent and 95 per cent during the lockdown.

Sadiq Khan has repeatedly come under fire throughout the crisis, and has been accused of risking lives by closing some Tube lines and running trains every 10 to 20 minutes when it would usually be every three minutes.

Key workers, including NHS staff, have complained they are being forced onto packed Tubes on a daily basis to get to and from work.

And rail unions have been accused of trying to stymie Britain’s recovery while holding the country to ransom after they said it was ‘premature’ to bring back normal services despite Europe’s public transport networks successfully ramping up to ease the lockdown.

RMT’s Assistant General Secretary Mick Lynch said yesterday that ministers want to be running around 85% of train and Tube services within a fortnight despite it not being ‘safe’ – days after they demanded a new pay deal for workers during the coronavirus crisis.

Mr Lynch also admitted ‘most’ of their members are working despite Mayor of London Sadiq Khan slashing Tube and bus services to 15% and 12% respectively compared with normal levels and closing 40 stations. Yet tens of thousands of key workers are cramming on to public transport every day because they have no choice but to travel to work.

Meanwhile the government is today facing a furious backlash at its draft ‘road map’ for starting to loosen the draconian curbs strangling the economy and plunging the country into debt.

More people are set to be encouraged to edge back to work, with guidelines on how to minimise the risks. Other precautions will need to be in place if the two-metre social distancing rules cannot be maintained, while business will be told to close canteens, stagger shift patterns, spread out offices and stop people sharing equipment.

But unions and Labour are demanding much tougher protections, suggesting that otherwise people could simply refuse to show up for work.

The GMB said the guidance did ‘not adequately protect workers – and as a result many may refuse to work to avoid putting themselves and their families at risk’.

Rail unions have been particularly vocal in stating their members must not be put at risk on crowded trains without more guarantees from the government. 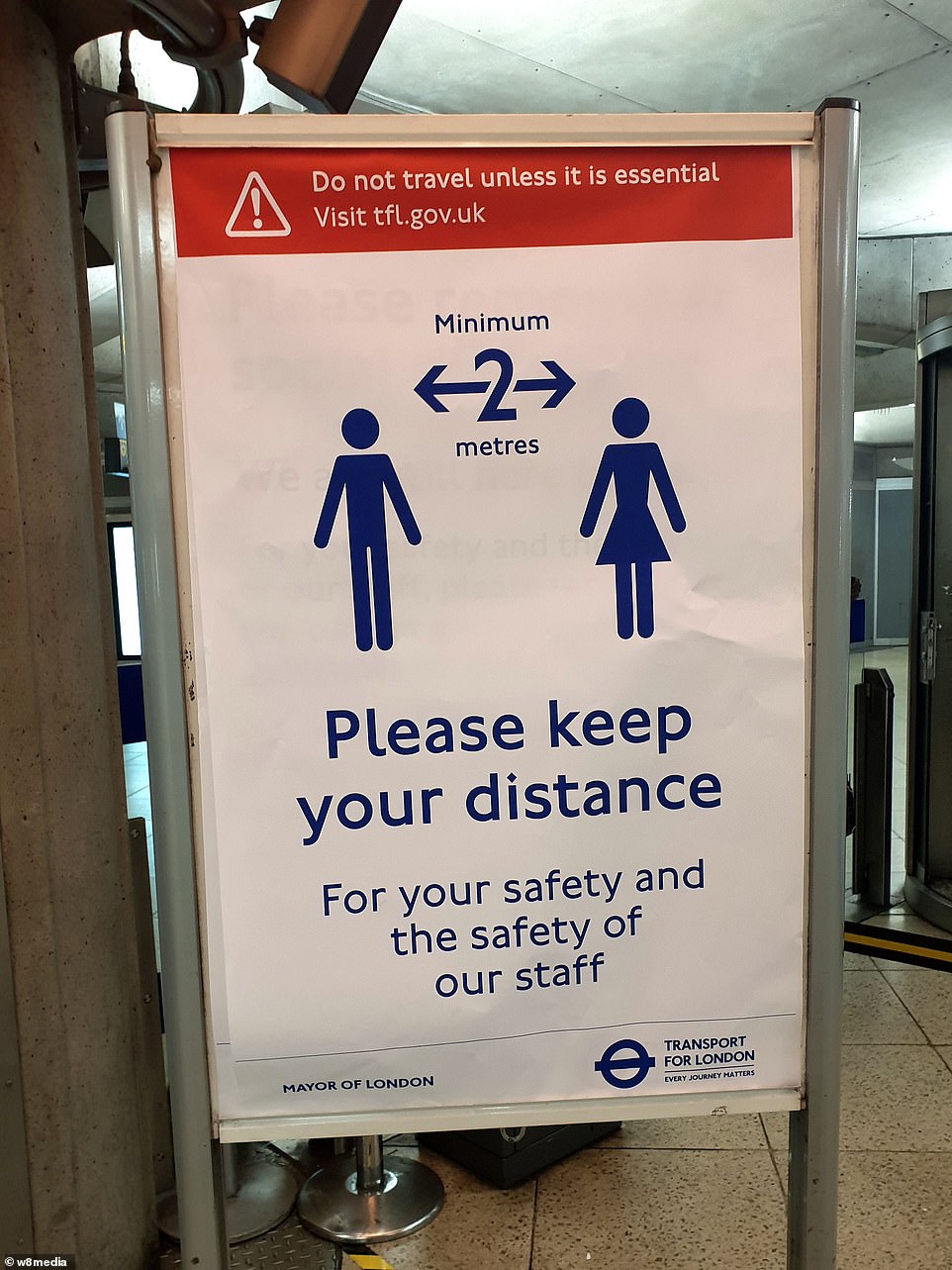 In other developments in the UK’s coronavirus crisis today:

John Phillips, acting general secretary of the GMB Union, said: ‘We desperately need to get the economy going and nobody is keener than GMB to get people back to work – but this guidance was thrown together in a hurry and it shows.

‘Giving unions and employers just 12 hours to respond is not good enough and means crucial changes will not be made. We cannot endorse crucial guidance if it is incomplete.

‘The guidance has to be clear on how safe working practice is to be enforced.

‘As it stands, there is nothing on PPE, nothing on enforcement to ensure workplaces are safe and nothing giving workers the assurances they need to get back to their jobs.’

Transport unions said that drivers could refuse to resume train and bus services.

One Government source said the opposition of the unions could be a ‘major problem’ in getting Britain back to work and ending the crippling lockdown that is costing the economy an estimated £2billion a day. However, businesses reserved judgment on the proposals, with bosses saying the plans did not reflect real life and lacked information about the kind of protective equipment staff will need.

In a round of interviews this morning, Sir Keir Starmer lined up behind the warnings, saying the government must set a ‘national safety standard’.

‘This is not just a reassurance exercise for those going back to work, it’s essential for the safety of the nation,’ he said. If you don’t have the protective equipment, and that means that people get infected, we’re going to be right back where we started.’

He insisted protective equipment for workers is not a ‘luxury item’ that would be ‘nice to have’.

Rush-hour is creeping back: Congestion in London is 4% higher than it was at the start of the lockdown and is rising by 1% a week – as traffic on UK roads also hits new peak

Real-time traffic information shows increasing numbers of Britons are returning to the roads despite the lockdown still being firmly in place.

Statistics this morning reveal an upward trend in traffic levels across the country with swathes of drivers causing congestion in cities and motorways.

TomTom data shows the traffic congestion level in London was 16 per cent at 8am yesterday morning, compared to 12 per cent on April 6.

At 8am this morning, traffic spiked at 17 per cent while at rush hour on Friday evening, it peaked at 23 per cent. 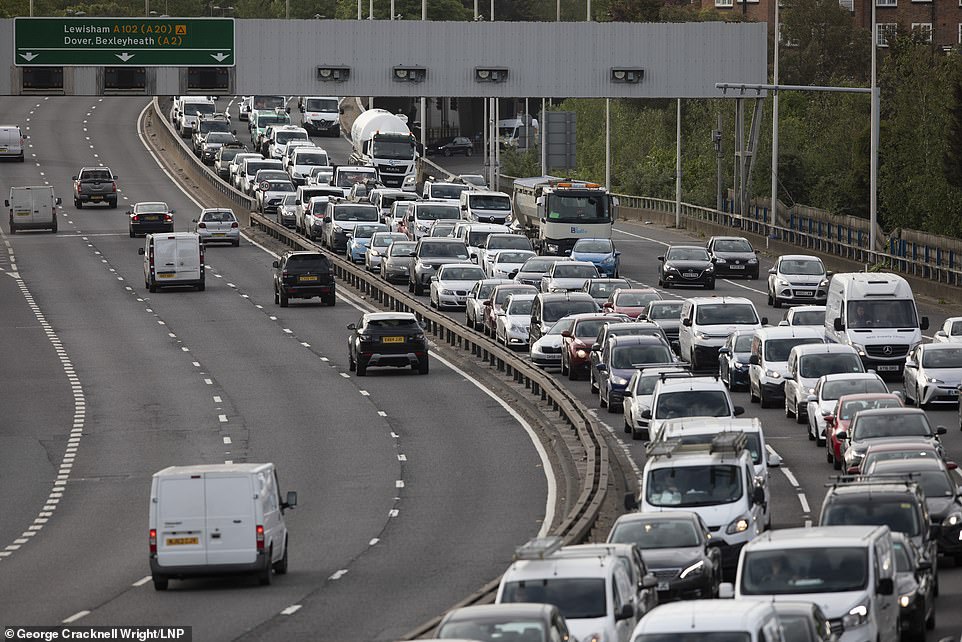 Hundreds of cars, vans and lorries were stuck bumper-to-bumper in rush hour traffic on the A102 in Greenwich, south-east London this morning 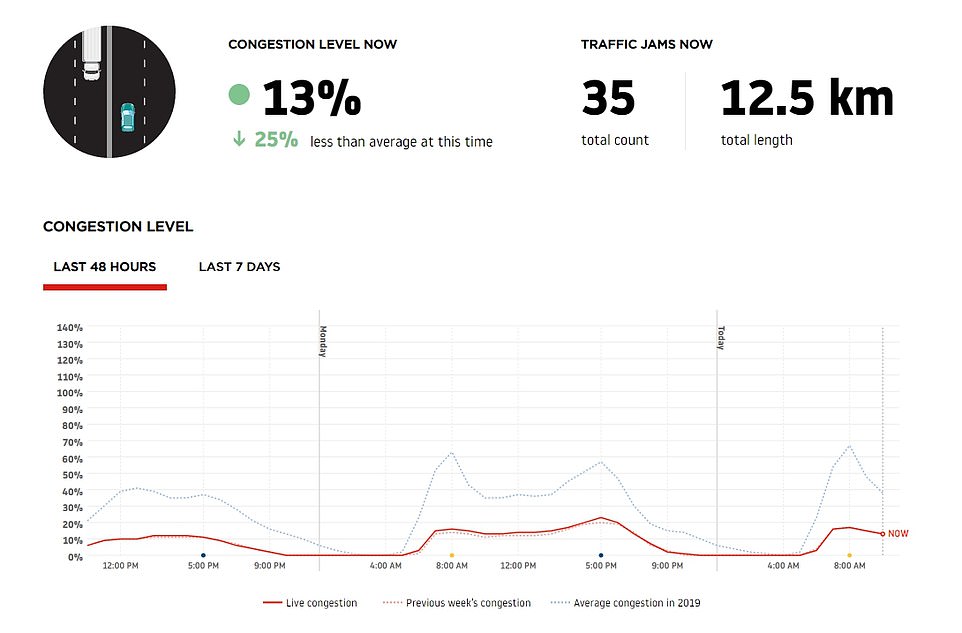 At 8am this morning, traffic spiked at 17 per cent, according to data compiled by TomTom 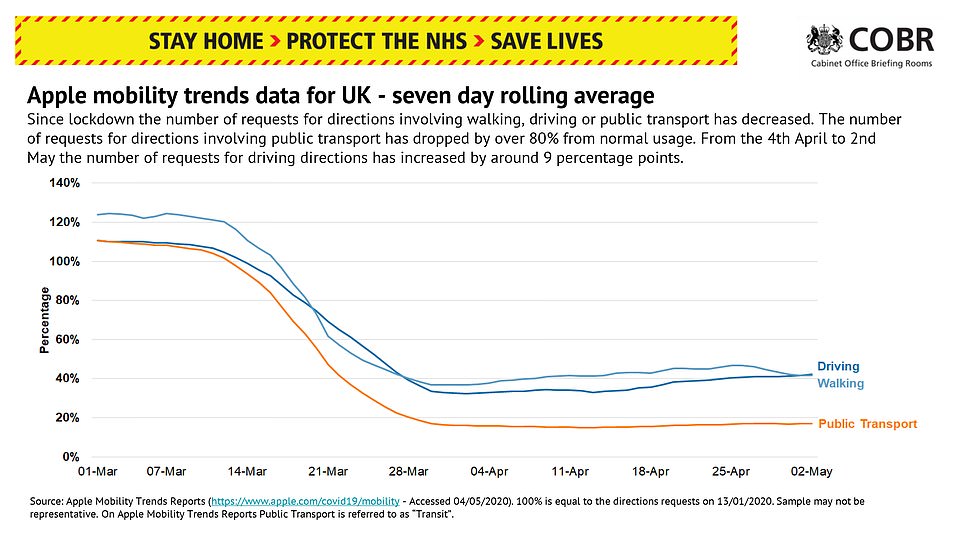 The behaviour of road users has deteriorated since the start of the coronavirus pandemic, a new survey suggests.

An AA poll of more than 19,700 drivers indicated that a quarter (25%) feel car drivers and cyclists are behaving worse than before the outbreak.

This is compared with 21% who think cars are being driven better, and 10% who believe cycling has improved.

Many police forces have reported an increase in speeding during the coronavirus lockdown, as some drivers turn quieter roads into racetracks.

The Metropolitan Police enforced 800 speeding offences last week, more than triple the total during the same period in 2019.

This included one driver caught doing 93mph in a 30mph zone, and 34 incidents of drivers exceeding 100mph.

The AA survey indicated that pedestrians appear to be the lockdown stars, as 25% of drivers think walkers are behaving better than before the pandemic.

Mr King went on: ‘It’s good to see that pedestrians on the roads are perhaps being more vigilant than before.’

There was no congestion at all on the Capital’s roads on Easter Monday, in stark contrast to last year when traffic maps shows roads were almost gridlocked at peak times.

But as some companies including constructions firms and food and drink outlets begin to gradually return to work, traffic on the roads is steadily increasing.

Hundreds of cars, vans and lorries were stuck bumper-to-bumper in rush hour traffic on the A102 in Greenwich, south-east London this morning.

The amount of road traffic is seen as a key measure for determining how rigidly the UK is complying with quarantine measures that allow for only essential travel.

Separate data compiled by the technology giant Apple shows a further increase in the number of people undertaking journeys.

London, Manchester and Liverpool are all seeing traffic levels creep up.

The statistics emerge as Ministers are today facing union warnings over walkouts if health and safety demands are not met when lockdown eases – as Keir Starmer jibed that PPE is not a ‘luxury item’.

The government is facing a furious backlash at its draft ‘road map’ for starting to loosen the draconian curbs strangling the economy and plunging the country into debt.

The government is believed to have warned industry groups that the restrictions could stay in place for six to 12 months – dashing hopes of a swift return to normal life.

Under the plans, shift will be staggered to limit the number of people at work at any one time and reduce rush-hour pressure on public transport.

Access to communal facilities like photocopiers will be limited, areas of the floor will be taped off to keep people two metres apart and people could be barred from sitting opposite one another.

Hot desking will be banned and workers will not even be allowed to lend each other a pen for fear of spreading the virus.

As a result of the stringent measures, millions of staff will be told to keep working from home indefinitely ‘if at all possible’. 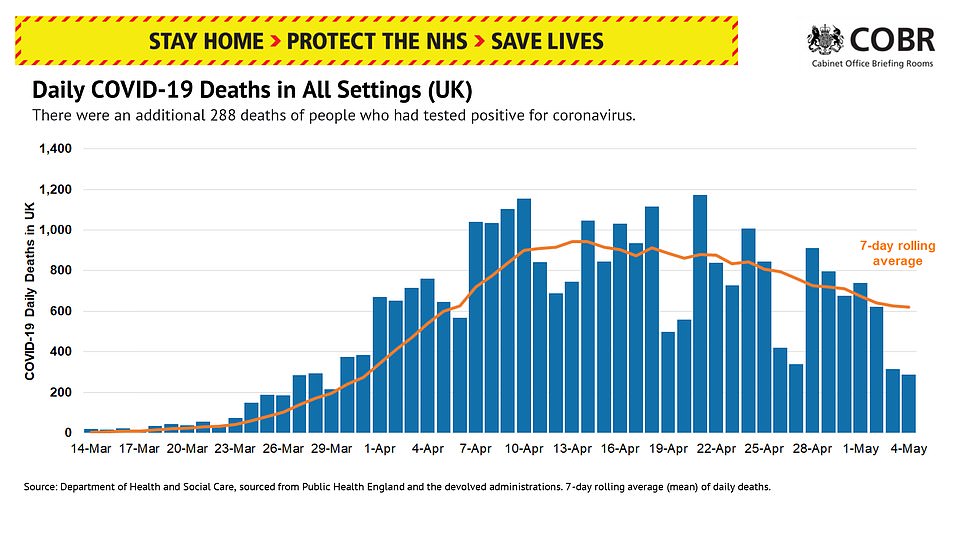 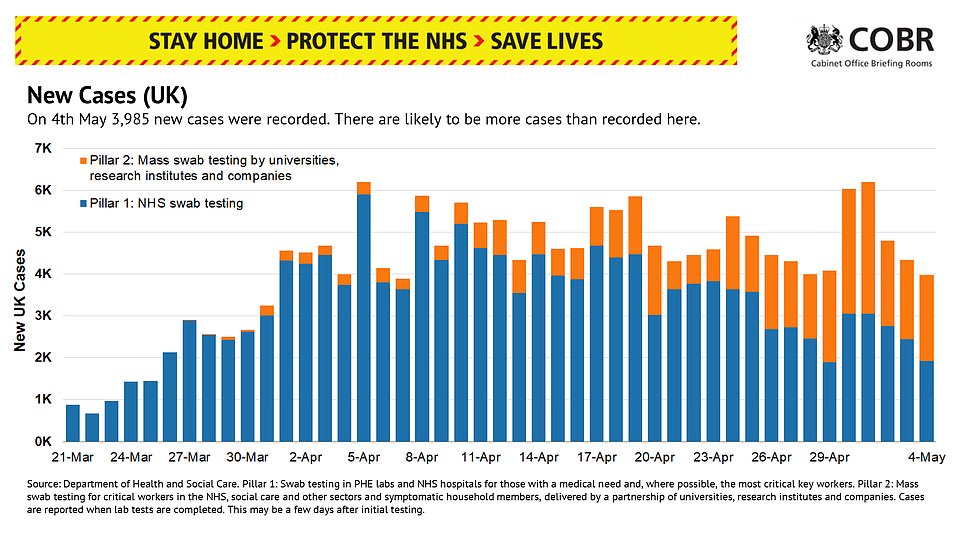