Los Angeles police officers are encouraged to obtain social media information during field interviews with civilians regardless if they are suspected of being involved in a crime, according to documents obtained by the Brennan Center for Justice.

The group collected the documents related to the LAPD practice in an effort to gain insight into how police departments monitor social media. It noted that a 2015 memo from then LAPD Chief Charlie Beck said officers should collect for social media and email account information to include the type of account and account name during interviews, which are then documented on field interview cards.

In a July 22, 2020 memo, current police Chief Michel Moore said the cards are the basis for “investigations, arrests, and prosecutions.” 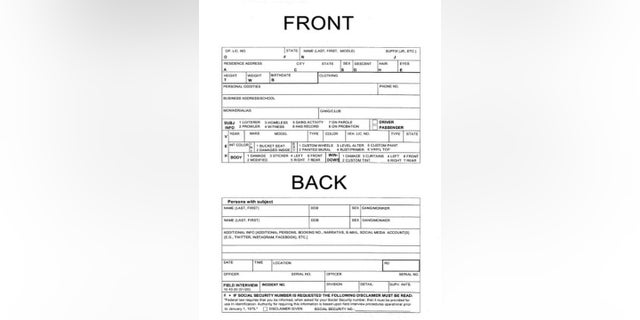 “Information documented on the FIs is one of the most important tools that the Department utilizes to solve crime,” Moore wrote.

The documents were first reported by The Guardian. Fox News had reached out to the LAPD.

In a statement released by the LAPD on Thursday, the department said social media handles can be “critical pieces of contact information, along with phone numbers and email addresses, because people communicate through social media now just as frequently as they do through calls, texts or emails.”

“The LAPD is here to keep Angelenos safe, and we are committed to protecting their privacy rights as we confront that challenge every day,” the agency said.

Documents also show how the LAPD works with online surveillance companies, something many police departments already do.

The LAPD use of field cards came under scrutiny last year when three officers were charged with falsifying records, claiming people they had stopped were gang members.