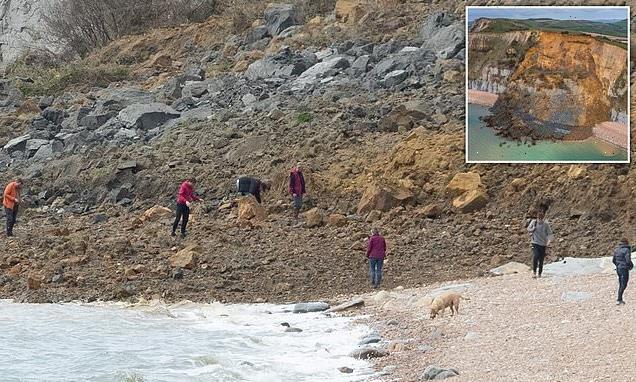 Stay away from the Jurassic Coast: Fossil hunters are urged not go to site of biggest collapse in 60 years as experts warn more rocks will ‘come crashing down’ after onlookers were seen clambering on rubble

More rocks will ‘absolutely come crashing down’ as a large crack remains in the side of a cliff face where 4,000 tonnes of sandstone plummeted onto a Dorset beach overnight on Monday, experts today warned.

A crowd of fossil enthusiasts have since gathered on the beach where a 430ft cliff gave way – described as the biggest rockfall in 60 years – causing boulders the size of cars to fall onto Seatown Beach.

A dozen or so people have been photographed clambering over large chunks of rubble to get a better look at the exposed rockface despite the danger still posed by the nearby cliff.

Richard Edmond, a local geology expert, warned more rocks were likely to soon ‘come crashing down’ as a crack had formed in the western side.

He added: ‘It is such a steep cliff it won’t be a gentle slide either – it will come absolutely crashing down.’

The cliff face is made up of a ‘complex blend’ of clay and sandstone, he said, adding that landslides often ‘bring down a lot of great rocks and fossils’ but the sea needs to wash away the mud before it is worth paying a visit.

James Loveridge, a drone photographer, said he saw two women sitting just below a large crack in the cliff – which Mr Edmond said was likely to cause a second landslide very soon. 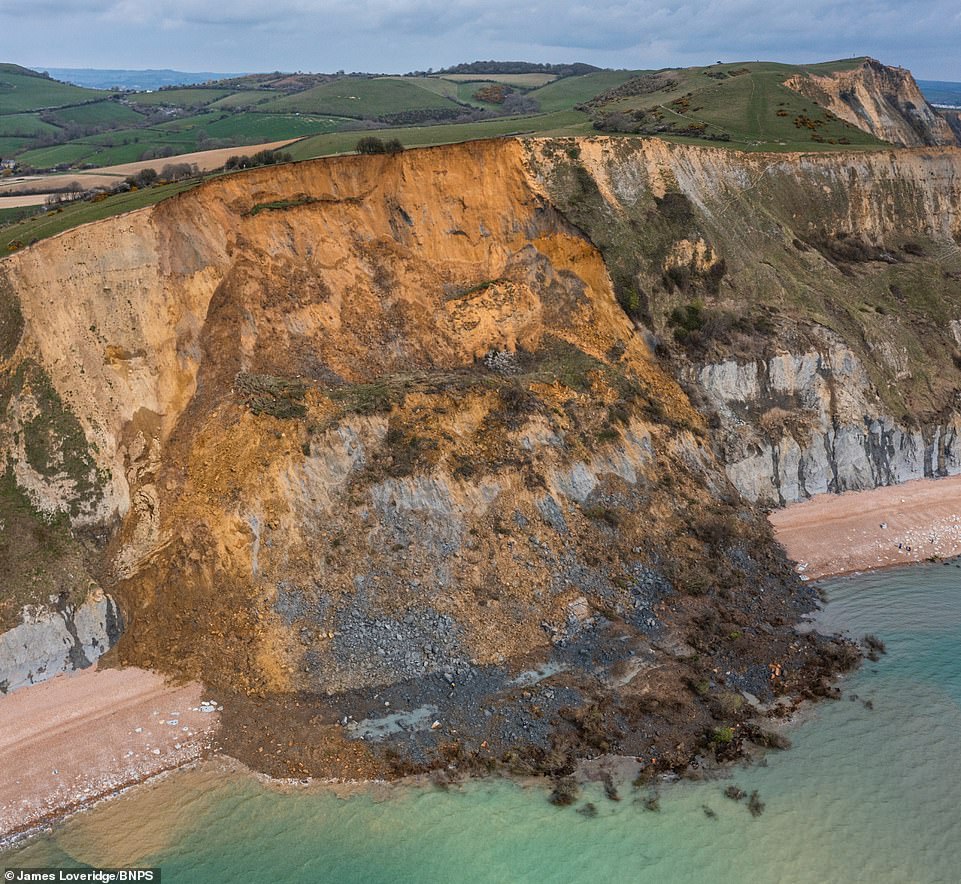 A large chunk, described as the biggest in 60 years, of a 430ft sandstone cliff gave way on Monday night causing boulders the size of cars to plummet onto a beach near Seatown in Dorset 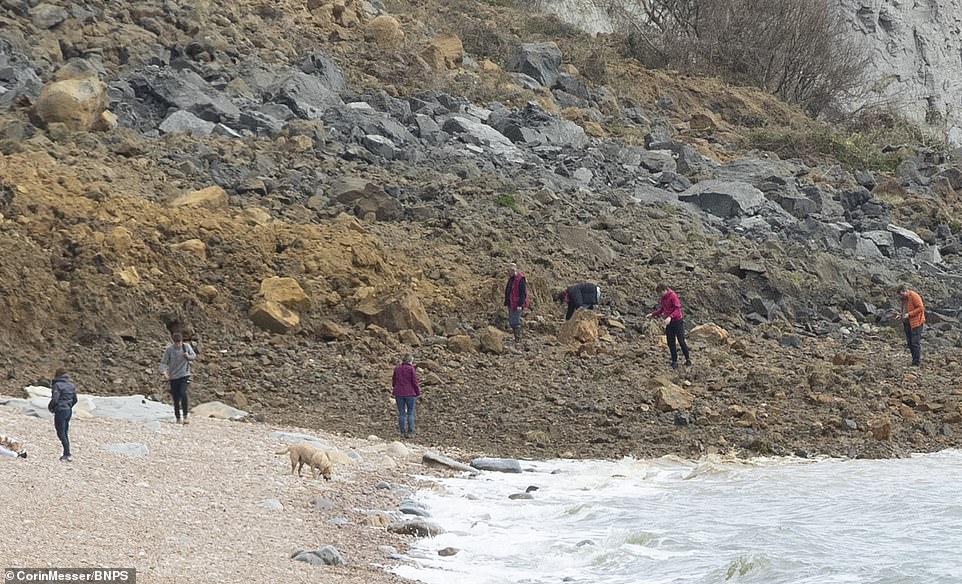 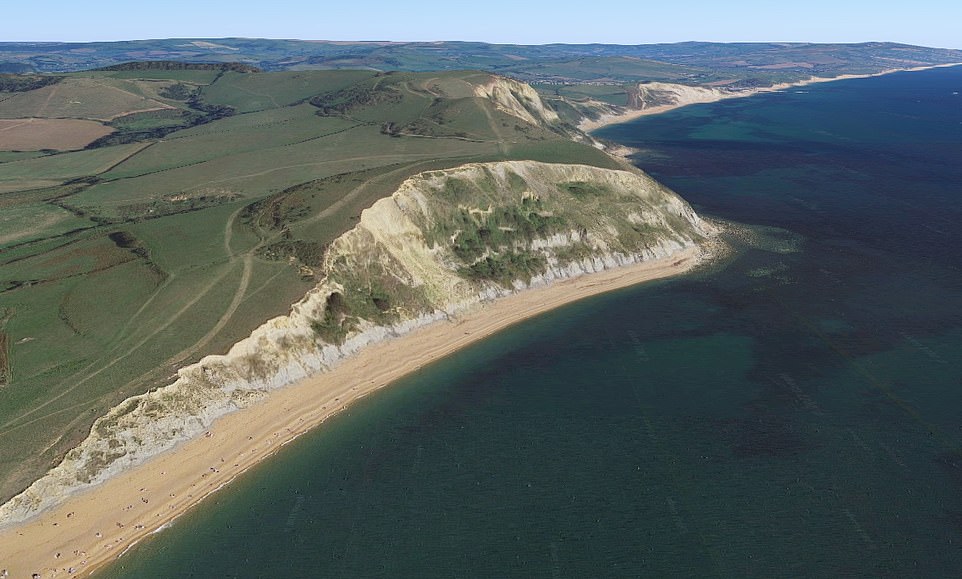 Pictured: The beach before the collapse. It is believed to have been caused by natural erosion, not helped by recent mixed weather

Rangers spent much of yesterday assessing the damage and Dorset Council has urged people to stay away as crowds were seen inspecting the mountain of debris today.

The slip exposed sandstone which has not been seen for centuries, acting as a beacon call for fossil lovers, despite the resulting rubble completely blocking the picturesque beach.

The ‘gigantic’ landslip hit almost 1,000ft of cliffside, with whole trees seen floating out to sea after recent mixed weather sped along the process of natural erosion.

Mr Loveridge added: ‘I saw two ladies sat just below the big crack, two people walking across the landslip and three people on the other side of the beach who could only have got there by climbing over.

‘The fall was absolutely huge and you could even see trees floating in the sea which was unusual for sure. I flew the drone at about 400ft and am really pleased with how the pictures came out.’

Dorset Council also warned further falls are expected as a spokesman urged residents to stay clear of the area.

A spokesman for Dorset Council said: ‘There has been substantial rock fall between Seatown and Eype Beach. Further movement is expected with fresh cracks, affecting the fence line but not the Coast Path.

‘We will monitor over the next few weeks to ensure that any further movement does not affect access.

‘Now the ground is drying out, there is the possibility of more slips and falls and they can happen very quickly. For your safety keep clear of tops and bases of cliffs when out and about.’ 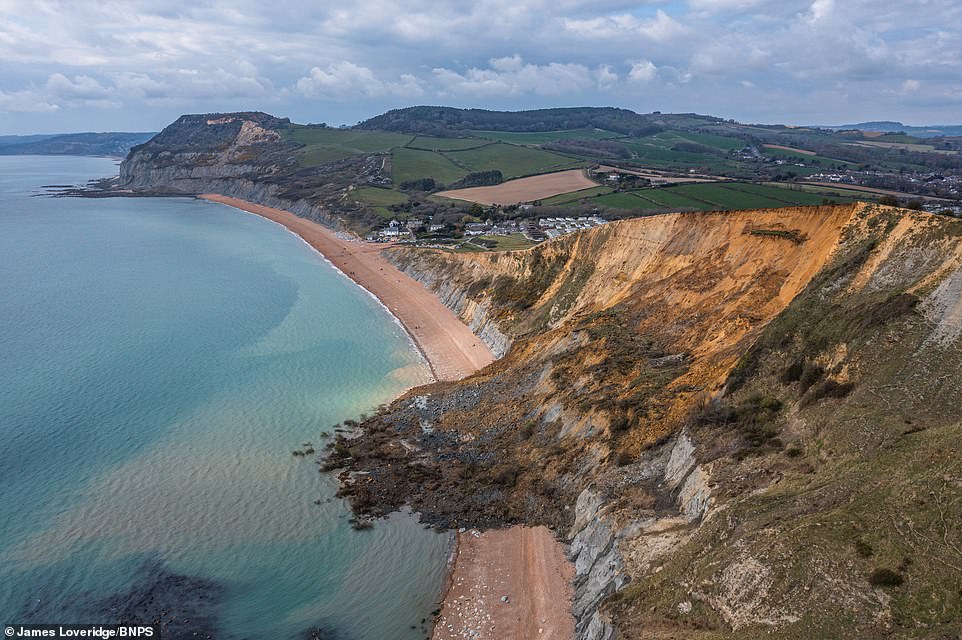 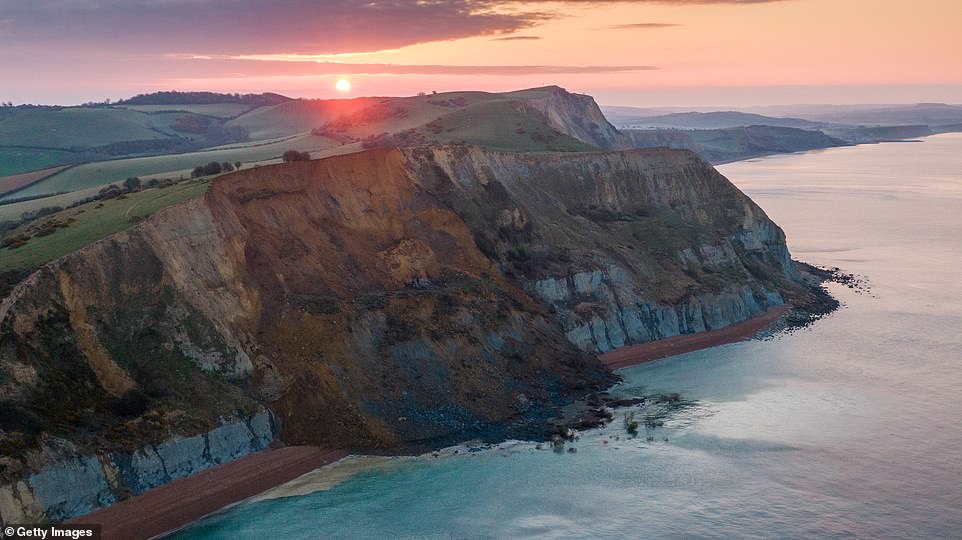 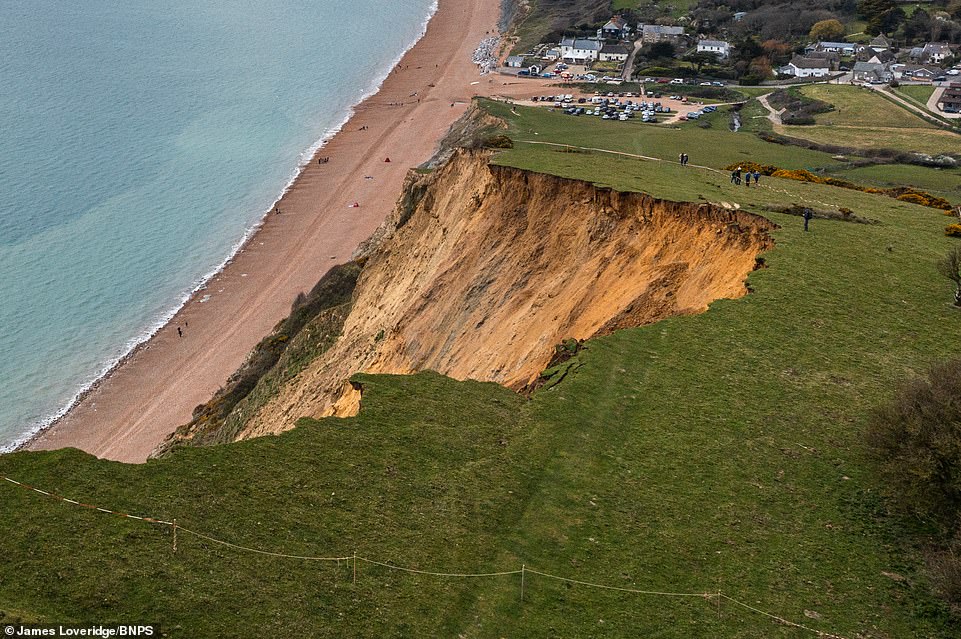 Among those to see the debris was walker Nicola Prakash, who came across it while on the beach yesterday morning 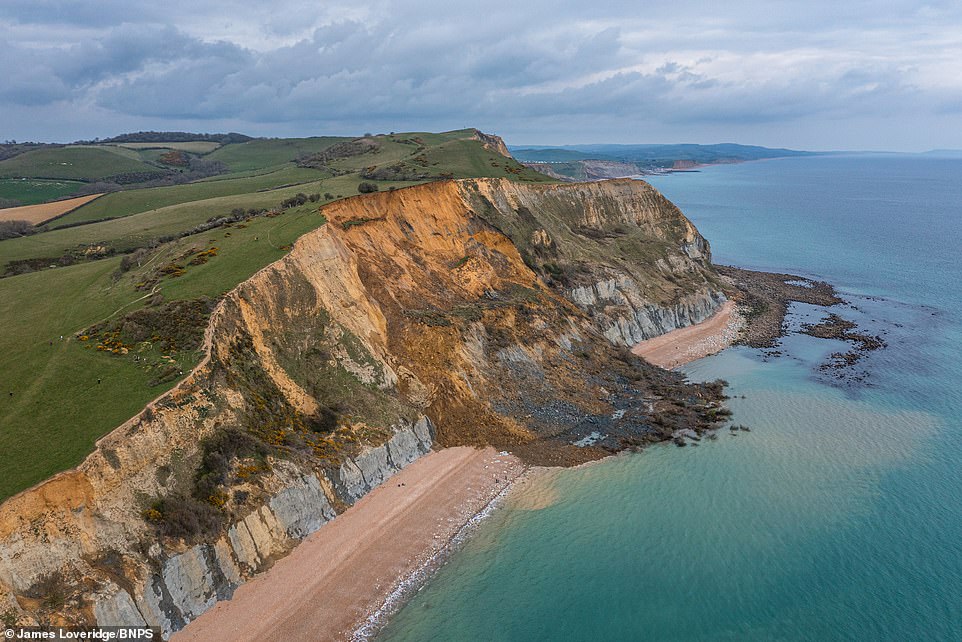 Richard Edmond, a local geology expert, warned more rocks were likely to soon ‘come crashing down’ as a crack had formed in the western side 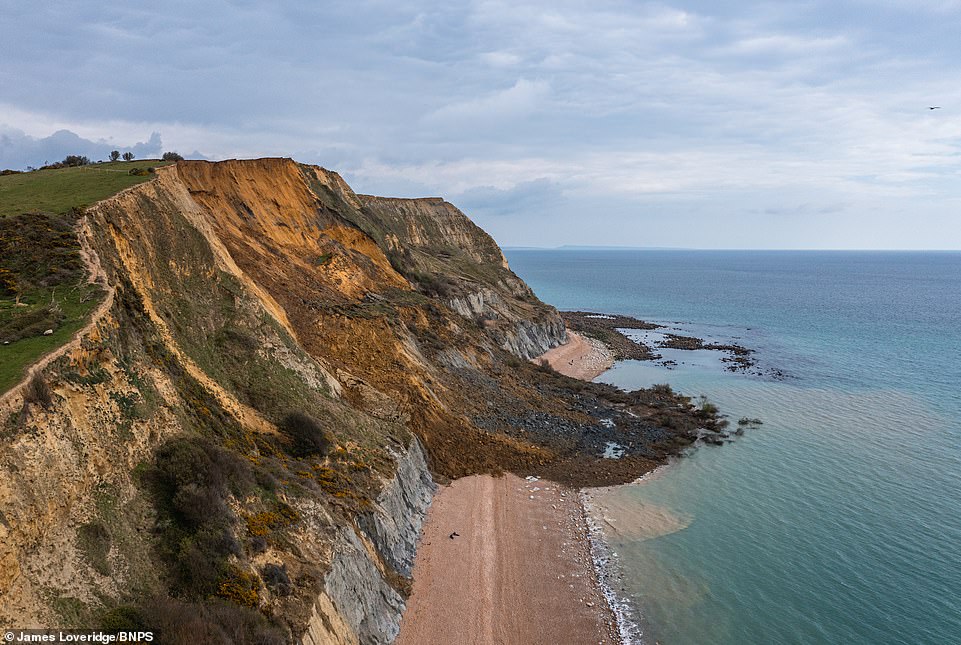 Jake Lanning, from West Bay Coastguard, yesterday said: ‘We have been aware of this since this morning and it is a very very substantial fall.

‘The county council are aware of it and I know their rangers have been out assessing the damage. I believe it was caused by substantial cracks around the cliff, which have occurred as part of natural erosion.

‘The recent warm days and cold nights probably haven’t helped either and we’re expecting to see a fair bit of this in the coming weeks.

‘In terms of this one, high tides will eventually see the debris disappear but at the moment the beach is completely cut off. We weren’t called out to it, as there is not any danger to life, but we did get a lot of calls about debris in the water.

‘The fall was so big that people thought the rocks and trees were vessels and/or people in difficulty.’

Among those to see the debris was walker Nicola Prakash, who came across it while on the beach yesterday.

She said: ‘The entire beach is blocked, it’s very lucky it happened overnight rather than during the day. It is a huge landslip, certainly the biggest one I’ve seen in my 40 years in Bridport.

‘I was chatting to some of the people who live by the beach and one man who’s been here for 60 years said it’s the biggest one he’s ever seen.

‘By the looks of things there could well be more to come so people need to stay away from that area of the beach.’