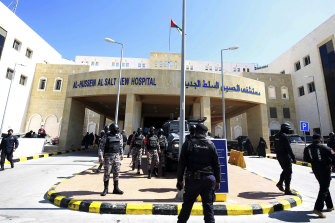 Soldiers stand guard outside Al-Hussein Al Salt Hospital in Salt, Jordan after at least six patients in a COVID-19 ward at the hospital near the capital Amman died due to a shortage of oxygen supplies. Credit:AP

Obeidat said initial investigations showed the six deaths were caused by a one-hour disruption in oxygen to the wards and that prosecutors were handling the case. 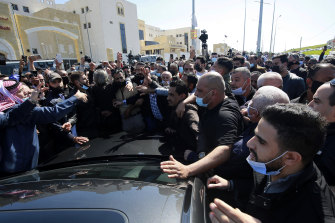 Jordan is facing a spike in COVID-19 infections attributed mainly to the fast transmission of the British variant of the virus. It announced last week stricter measures to curb the spread of COVID-19 and reimposed a full lockdown on Fridays.

The country reported 8300 new cases of COVID-19 on Thursday, the highest daily death toll since the pandemic first surfaced in the kingdom a year ago.