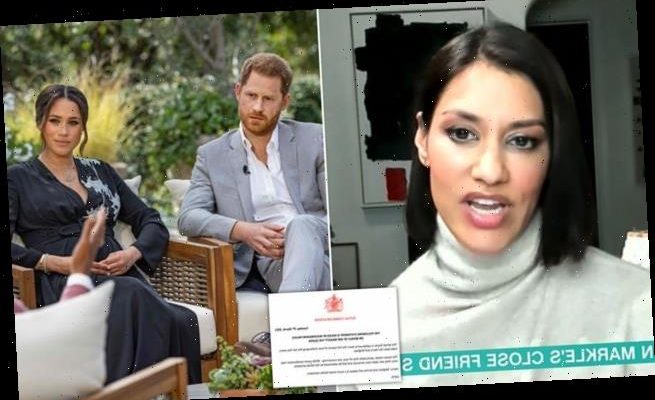 Meghan Markle’s close friend Janina Gavankar revealed today that the Duke and Duchess of Sussex have emails and text messages about her bombshell claims.

The actress also said she spoke to the pair regularly and they would now be focusing on ‘humanitarian and environmental work’ following their Oprah Winfrey interview.

Gavankar told how she watched the interview with the Duke and Duchess of Sussex which aired on CBS on Sunday, adding: ‘I don’t speak for them, I speak for myself.’

In her interview with Winfrey, Meghan said she had been suicidal while in the royal family but claimed she received no help after speaking about her suffering.

The Duchess and Prince Harry also alleged that a fellow unnamed royal had been worried about how dark their son Archie’s skin tone might be before he was born.

Buckingham Palace said last night that the issues raised, especially over race, were ‘concerning’ and would be addressed by the Queen and her family privately. 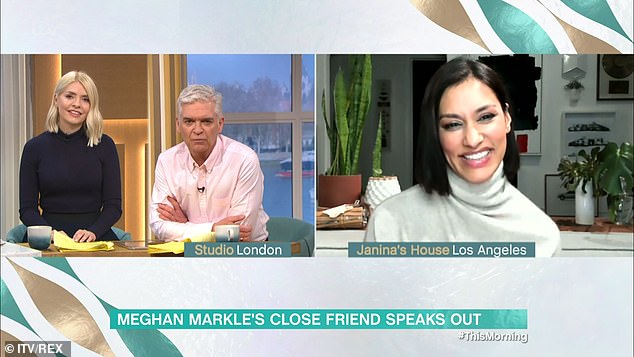 Gavanker, 40, who has been friends with Meghan for 17 years, told ITV’s This Morning today: ‘After reading this short statement that came out from Buckingham Palace today, I felt two things.

‘One side, I thought: I am so thankful that they are finally acknowledging the experience.

‘But on the other side, I am well aware that the family and the staff were well aware of the extent of it, and though their recollections may vary, ours don’t, because we lived through it with them. There are many emails and texts to support that.’

Gavankar – who lives in Los Angeles, attended the 2018 Royal Wedding and took the couple’s 2019 Christmas card photo – dismissed allegations of bullying after a number of claims were made against Meghan.

‘I have known her for 17 years and I have seen the way she regards the people around her and the people she works with, and I can say she is not a bully,’ the actress said.

Janina Gavankar is pictured with Meghan Markle, whom she has been friends with for 17 years

‘But I can also say that I am personally glad people are doing their due diligence because I also know why someone had to leave, and it was for gross misconduct.

Who is Janina Gavankar and what are her links to Meghan Markle?

Janina Gavankar is an American actress who has known the Duchess of Sussex for 17 years and took a photograph of the couple with Archie for their 2019 Christmas card.

She appeared in the 2020 basketball film The Way Back with Ben Affleck and is also known for her role in Apple TV’s drama The Morning Show with Steve Carell and Jennifer Aniston.

She played a lesbian in one season of drama The L Word, a shapeshifter in fantasy horror series True Blood and a security agent on supernatural drama Sleepy Hollow.

Her film roles also include 2014 rom-com Think Like A Man Too, starring Kevin Hart and Regina Hall.

As well as her acting career, Gavankar is also a musician and was part of an all-female singing group called Endera.

Gavankar is also a fan of video games and has lent her voice to Far Cry 4 and Star Wars Battlefront II.

In her Twitter bio she describes herself as an ‘actor. musician. geek.’

She attended Meghan and Harry’s wedding in May 2018 and said she did not announce her invite before being pictured arriving at Windsor Castle.

‘The truth will come out, there are plenty of emails and texts about that.’

It follows Buckingham Palace’s statement issued last night, saying that the issues raised in Harry and Meghan’s bombshell interview, especially over race, were ‘concerning’ and would be addressed by the Queen and her family privately.

The Royal Family said it was taking ‘very seriously’ the couple’s shocking allegation that a member of the family – not the Queen or Duke of Edinburgh – raised concerns about how dark their son Archie’s skin tone might be before he was born.

On This Morning, Gavankar was also asked by presenter Phillip Schofield if she had spoken to Meghan about coming onto the show.

She replied: ‘Oh yes, absolutely, I talk to them of all the time, we watched the special together, actually. We’re all happy that we are in a new era, we get to tell the truth.’

Gavankar added: Things are different now. But I will say I don’t speak for them, I speak for myself.’

The actress, who is best known for her roles in Ben Affleck movie The Way Back and Apple TV’s The Morning Show, added of the Sussexes: ‘I think they are feeling free.

‘It is nice to see them feel free. Now they can get back to what they really were focused on and how they really met and fell in love, that was through humanitarian and environmental work, they have Archewell.

‘They have been doing that kind of work way before they met each other and now they can do it together. It is actually a really good time.’

Meanwhile it was reported today that the Duchess of Sussex formally complained to ITV about Piers Morgan before the Good Morning Britain co-host quit.

Morgan left the breakfast show after an on-air row with a colleague who criticised him for ‘continuing to trash’ the duchess, after earlier this week saying he ‘didn’t believe a word’ of Meghan’s Oprah interview.