SHE looked like an ordinary holidaymaker, enjoying the idyllic view of the Caribbean sea – but this was no ordinary voyage.

For Penny Farmer, it was a chance to find answers to the brutal killing of her brother, Christopher and his girlfriend Peta Frampton, 40 years earlier. 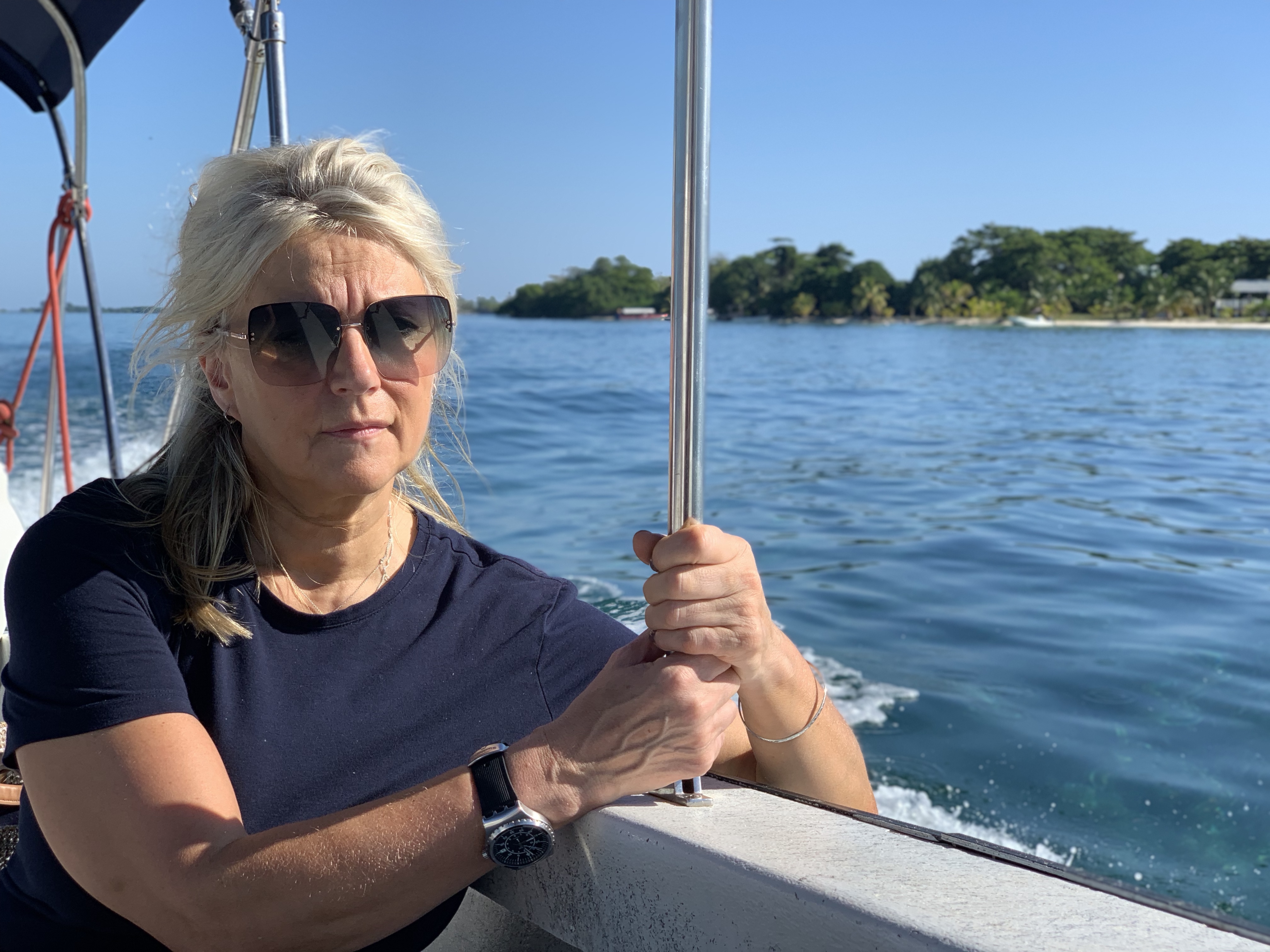 And joining her on board this emotional journey along the coast of Central America was the son of the prime suspect, who claimed to have witnessed their murder.

“It was this paradise environment, a really beautiful location, and it was so incongruous to think of the horrors of their deaths," Penny, 58, says.

In the summer of 1978, Chris and Peta’s bodies were found tortured and weighed down with heavy engine parts off the coast of Guatemala. Incredibly, the prime suspect in the case vanished for nearly four decades.

Now Penny’s trip to retrace the couple’s final journey is told as part of an extraordinary true crime podcast by BBC Radio 5 Live. 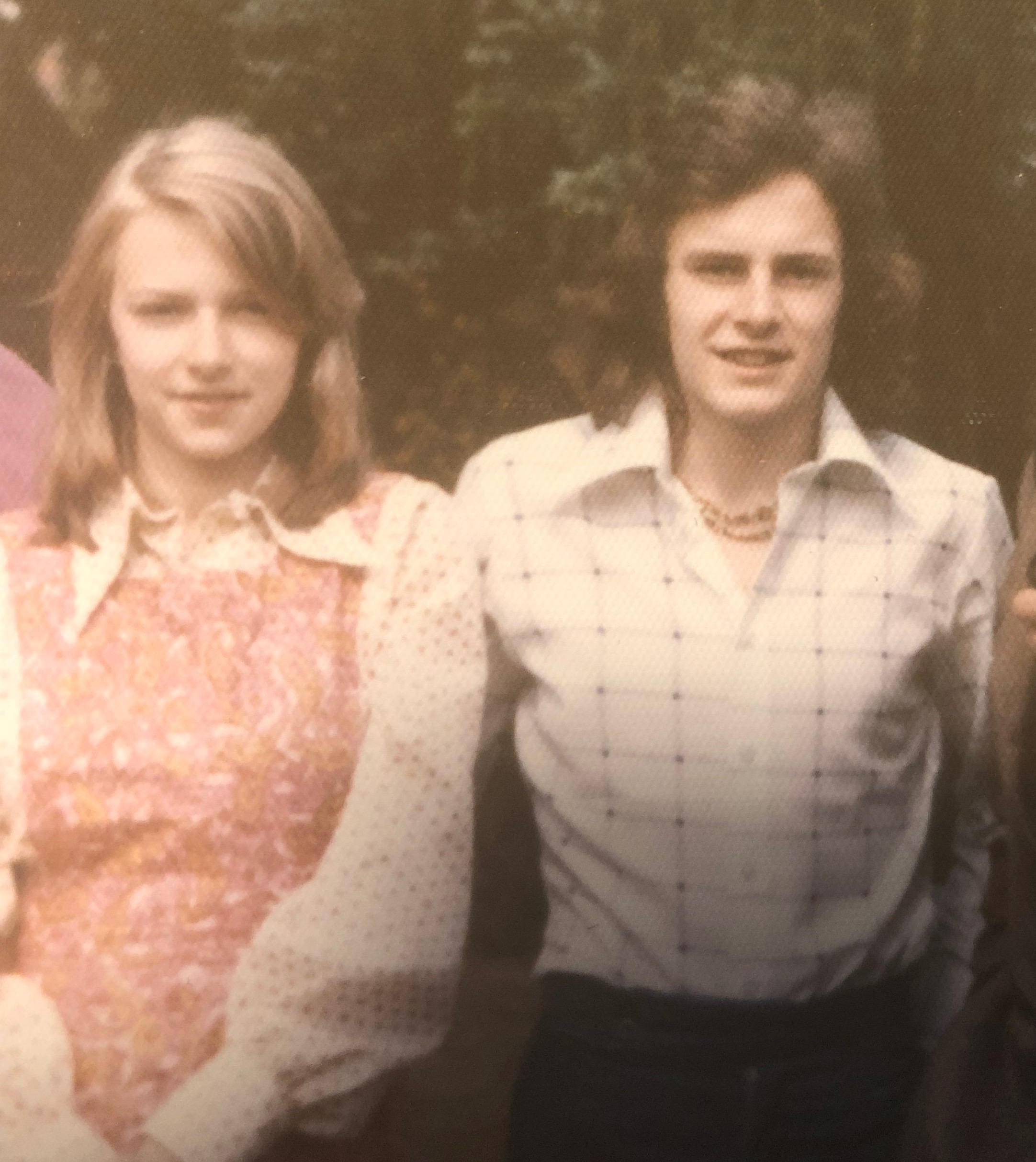 Listeners of the series, Paradise, can hear the astonishing moment when Penny sees her brother’s grave for the first time.

Penny, who works in PR and lives with 94-year-old mother, Audrey in Witney, Oxfordshire, said: “There are times, I wake up at night and think about it. These days, it’s never very far from me.

“I feel I’m living and breathing it all over again. It does consume you. You never really get over it, you learn to live with it.”

In December 1977, 25-year-old Christopher, a newly qualified doctor, and his childhood sweetheart Peta, 24, a law graduate, embarked on a round-the-world trip.

They regularly updated their families in Chorlton, Manchester on their travels, with Peta writing detailed letters of their adventures through Australia, Los Angeles, Mexico and Central America.

Penny, who was 17 at the time, said: “Chris was a big character. He was slightly outrageous and eccentric but really fun.

“He lived for sailing, which is why they ended up on a boat.” 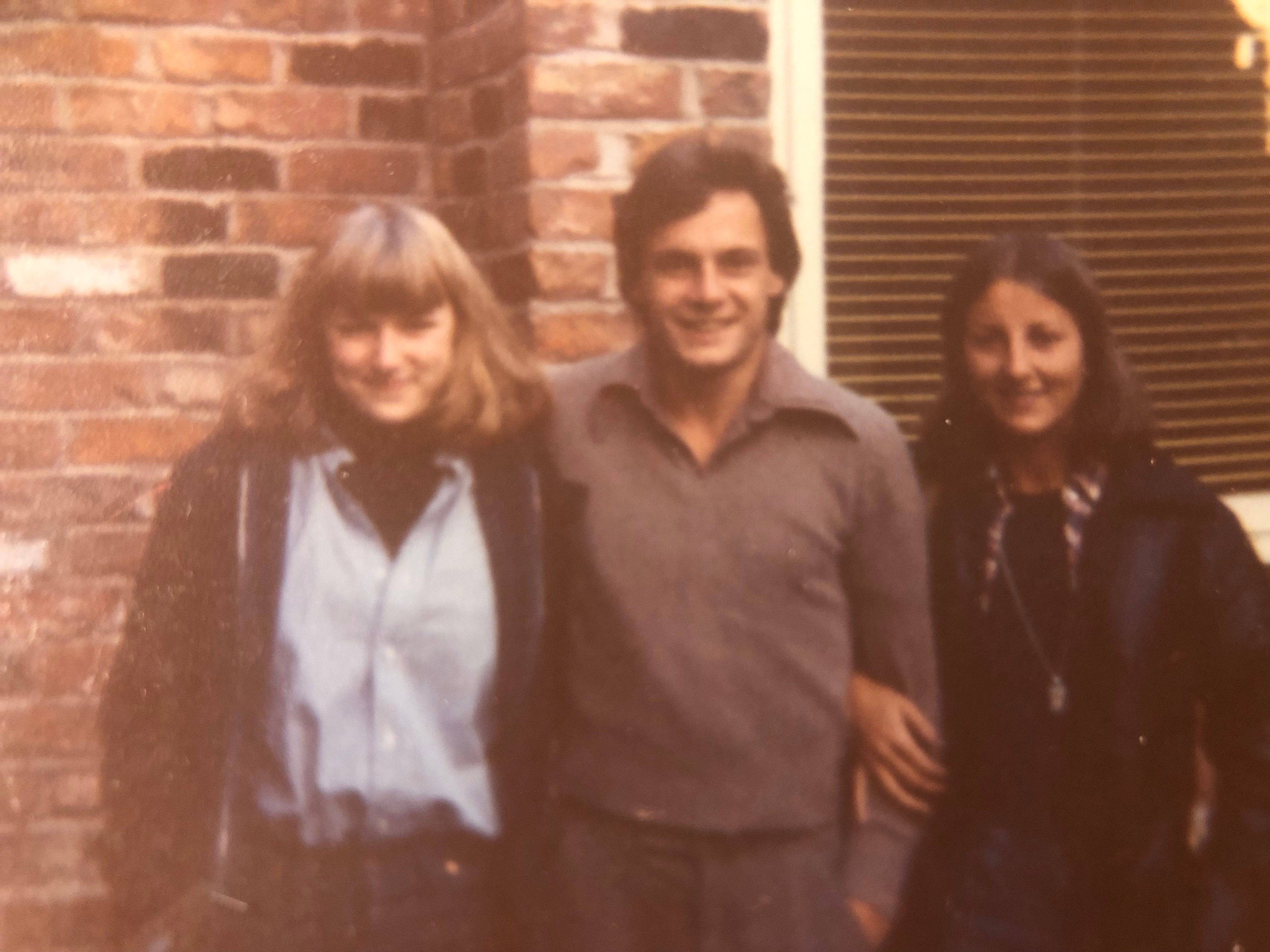 Peta’s last letter, dated June 28, 1978, told how the pair were travelling down the coast from Belize to Honduras with a charismatic American called Silas Duane Boston, and his young sons, Vince, 13, and Russell, 12, on the boat, the Justin B.

After that, there was silence.

In the months that followed, Penny’s father, Charles, contacted every authority he could think of and discovered that Chris and Peta were indeed on the Justin B when it left Belize, but there was no record of them when the boat next docked.

Nor had they used their visas to enter Honduras.

What they didn’t know then was that Chris and Peta’s bodies had been found 200 yards off the shore at Punta de Manabique, Guatemala, on July 8, and that they had been buried in unmarked graves. 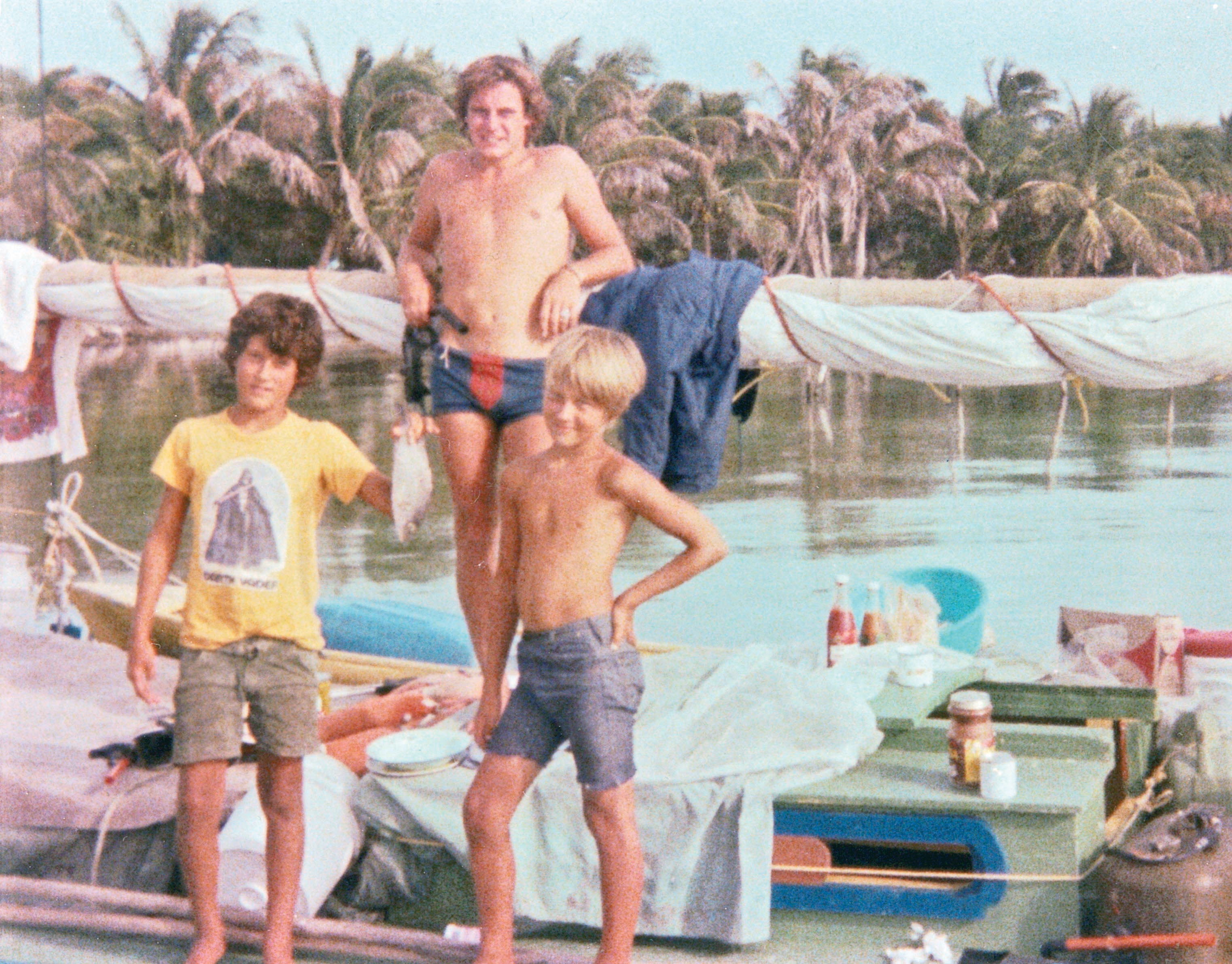 That devastating news only reached the UK via a private investigator nearly seven months after Peta’s final letter.

Silas Duane Boston, who had been in Belize after skipping bail on a rape charge in his home in Sacramento, USA, was nowhere to be found.

And so the case went cold, astonishingly, for 37 years.

One moment changed everything

Until, that is, Penny had a “lightbulb moment” in 2015, when she tried – and succeeded – in tracking down Russell Boston on Facebook.

Russell told Penny that Chris had tried to intervene in a fight between him and his father. When Boston took a swing at the Chris, he had fallen in the water. Russell claimed his heavy-drinking father couldn’t get over such humiliation, and murdered Chris and Peta days later. 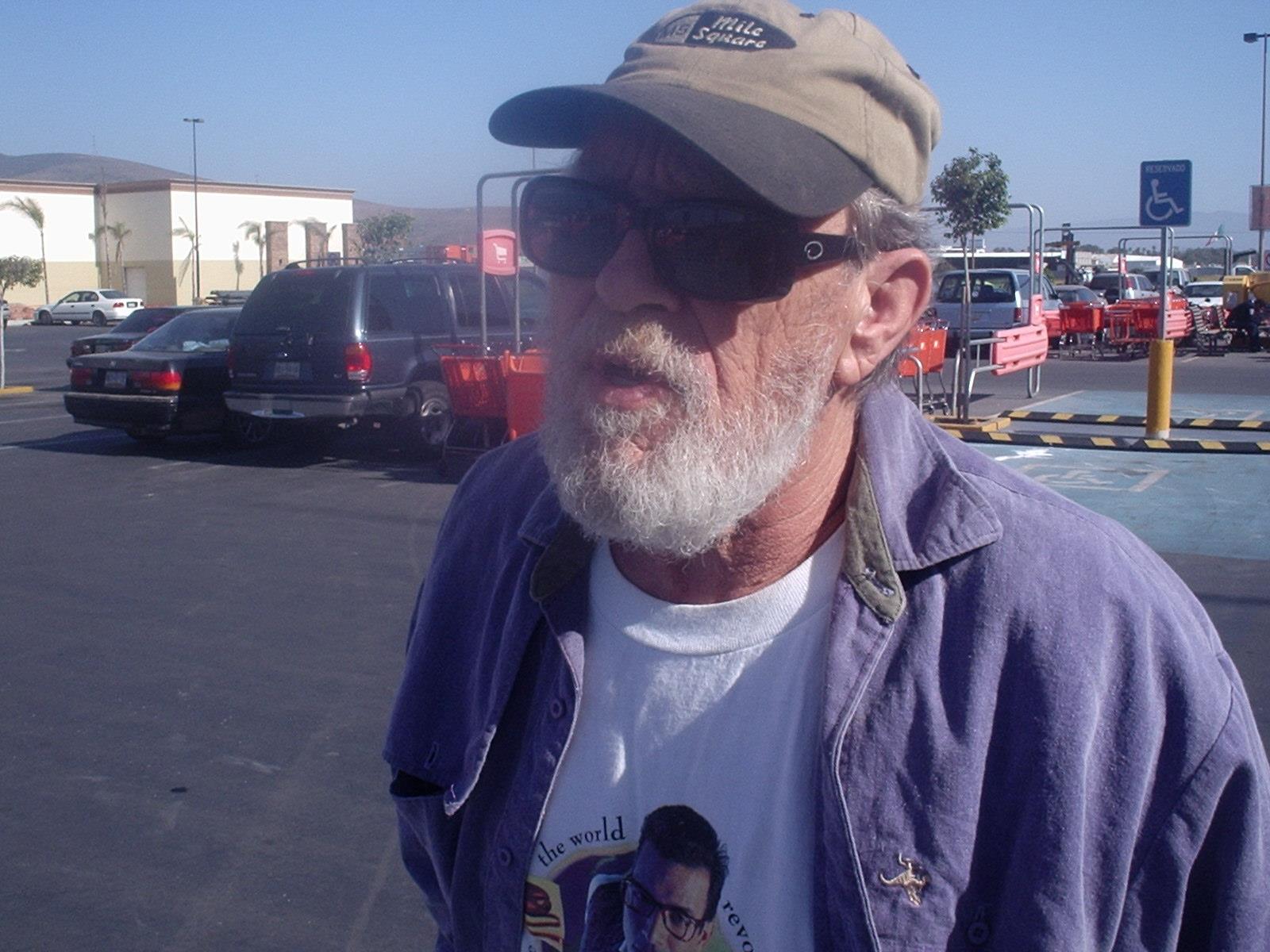 Attacked with a truncheon, stripped naked and stabbed

Penny, who has written a book on the case called Dead in the Water, said: “If you believe Russell, their ordeal went on for two nights and almost three days.

"Some of the details he gave me were too graphic that I didn’t include them in my book.”

On the podcast, Vince Boston gives his own harrowing account of what his dad did.

He said: “He was like a robot, no emotion, just beating the living bejesus out of him (Chris).

"He finally stopped and got some ropes and starting tying Chris and Peta up separately.”

Vince describes how Boston attacked them with a wooden truncheon, stabbed Chris with a fillet knife and stripped them both naked, tying them up and putting plastic bags over their heads.

He claims they were then tied to engine parts and pushed overboard. 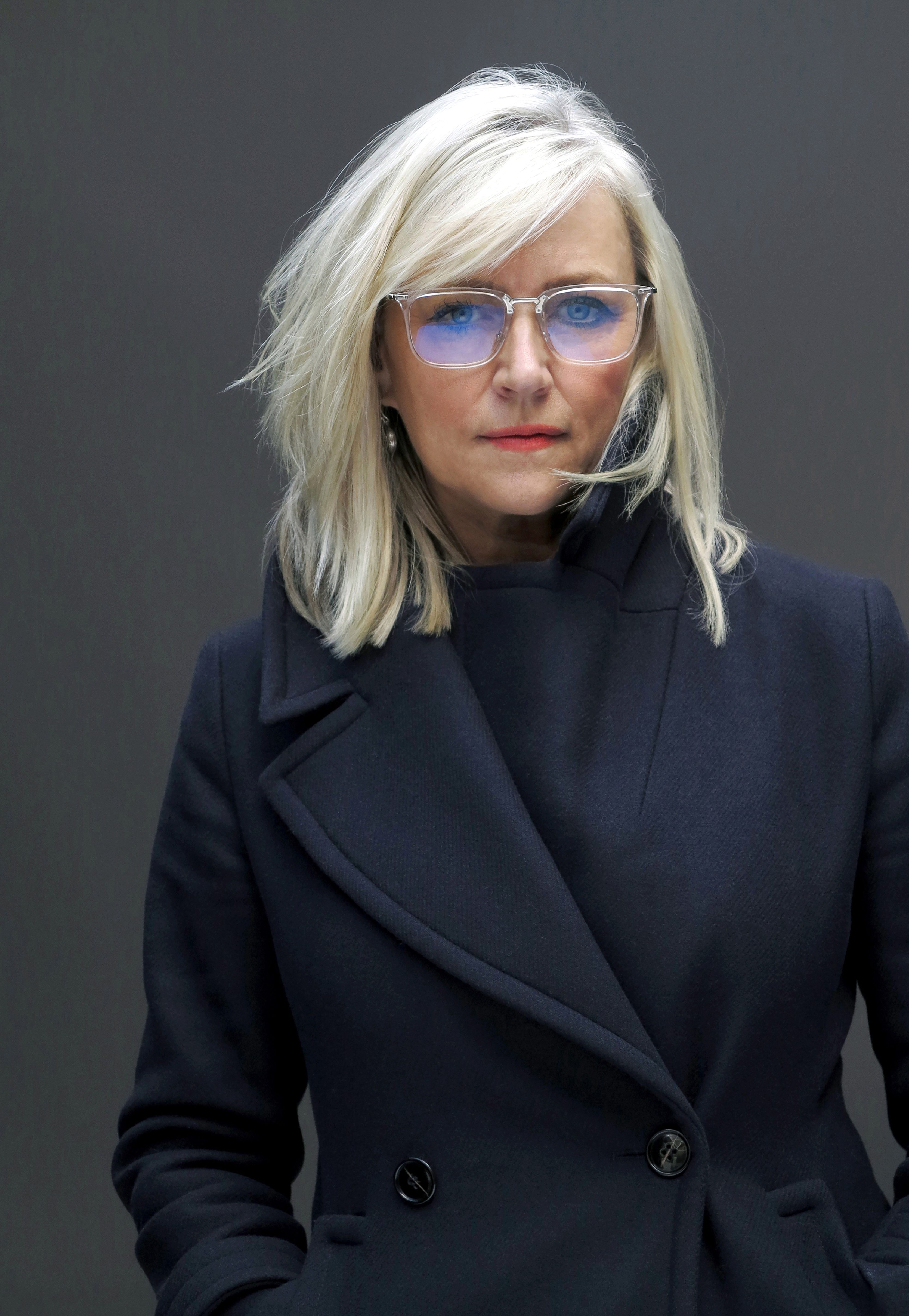 Penny’s amateur detective work convinced Greater Manchester Police to re-open the case and work with Interpol, Sacramento Police, the FBI and the US District Attorney’s office.

Silas Duane Boston was charged with Chris and Peta’s murders in December 2016.

But in April 2017, a couple of weeks before his trial was due to start and still protesting his innocence, Boston died in custody, aged 75.

Penny, a mum-of-three, said: “It was devastating. My mother, Audrey, and I were about to go over to Sacramento for the trial, and it was a massive blow.

“I choose to believe he committed suicide. He told his doctors to stop medication, food, liquid, everything, and the timing was too coincidental.” 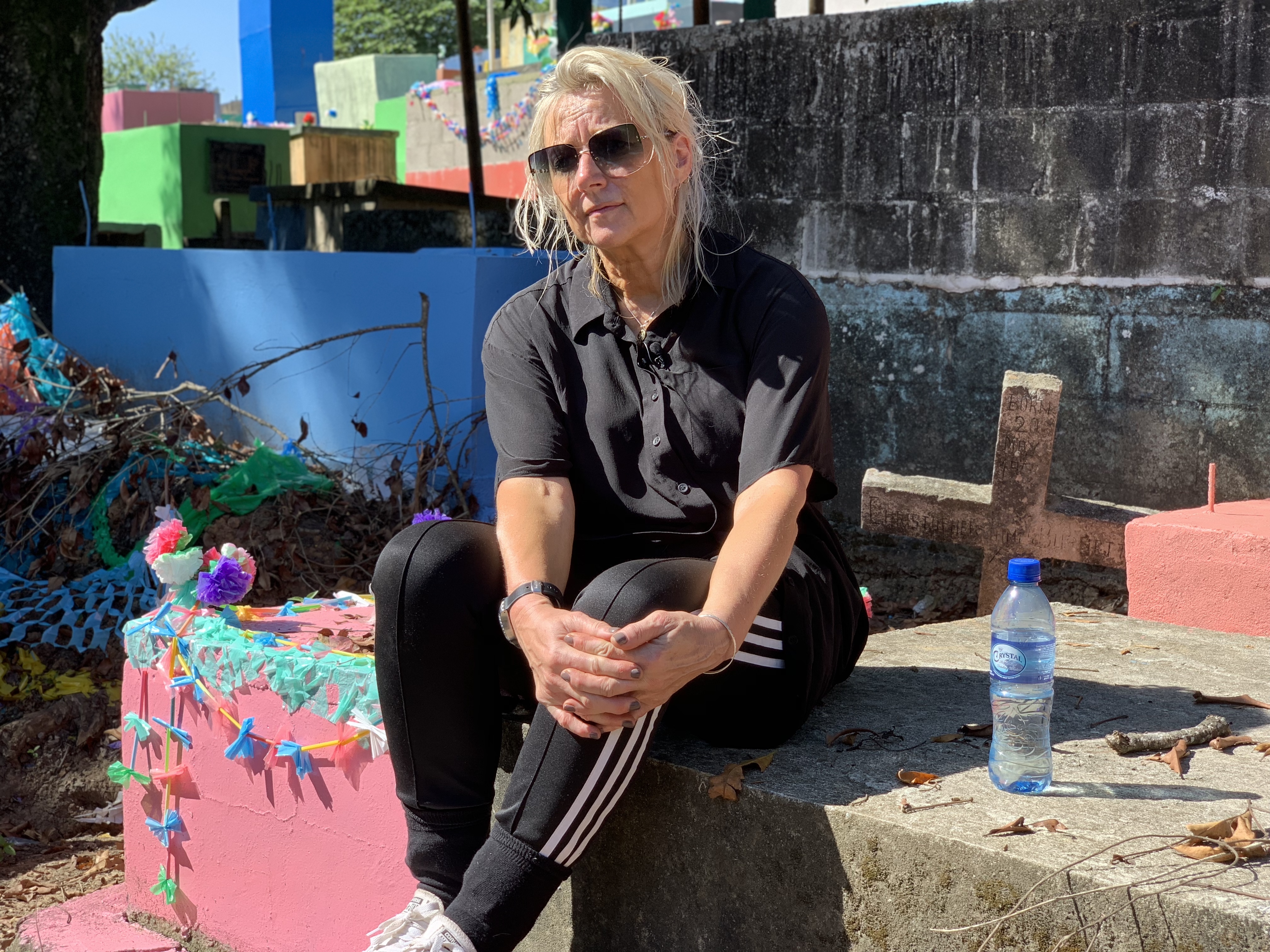 Dan Maudsley, a senior broadcaster on BBC Radio 5 Live, who produced and presented Paradise, had been following the case since December 2016.

He said: “It’s a complicated story and we’ve been really pleased that people have found the series so fascinating.

“We’ve found a lot of answers to a lot of mysteries surrounding this case and there are more to come.”

For Penny, Dan has become “the detective we never had,” someone fiercely passionate about unearthing the truth and someone who wasn’t bound by police jurisdictions.

She said: “There were still so many unanswered questions.

“Greater Manchester Police did an incredible job, and I will always be grateful to them that they reopened the case back in October 2015. 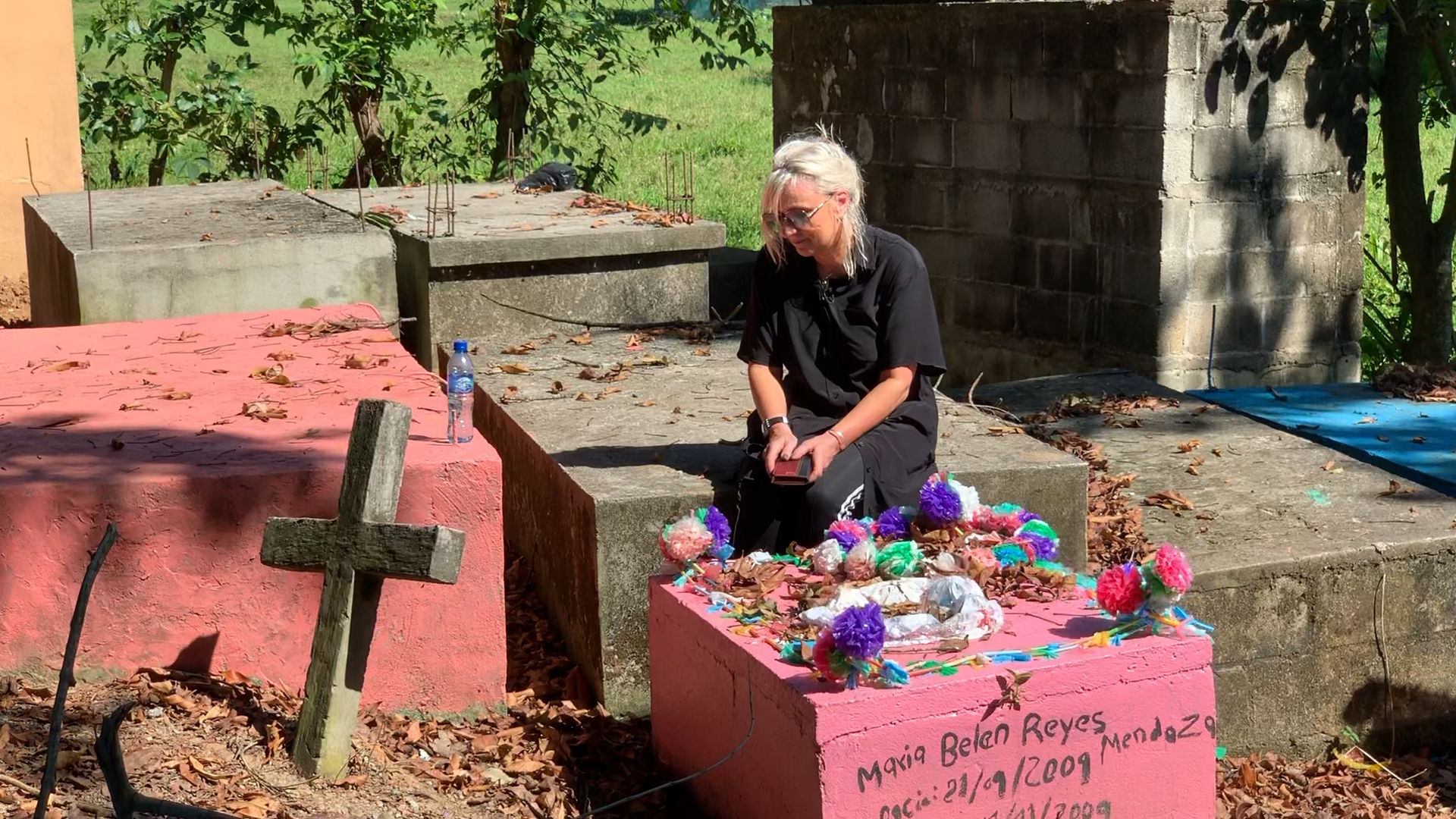 “But Dan has been like a dog with a bone, he’s turned over every stone possible.”

The resulting 10-part podcast, which is co-presented by BBC Radio 5 Live’s Stephen Nolan, has taken two years to produce, spanning thousands of miles and hours upon hours of interviews.

It throws more light on Silas Duane Boston and examines whether he was guilty, or if he could have been framed.

Manipulated by a monster

It also questions whether he may have killed others, including Vince and Russell’s mother, Mary Lou, who disappeared in 1968.

Following Chris and Peta’s deaths, their families were dissuaded from travelling to Central America, in part because of the dangers those countries posed to tourists.

When Penny did travel there for the podcast, it was with the rather unlikely companion of Vince Boston. 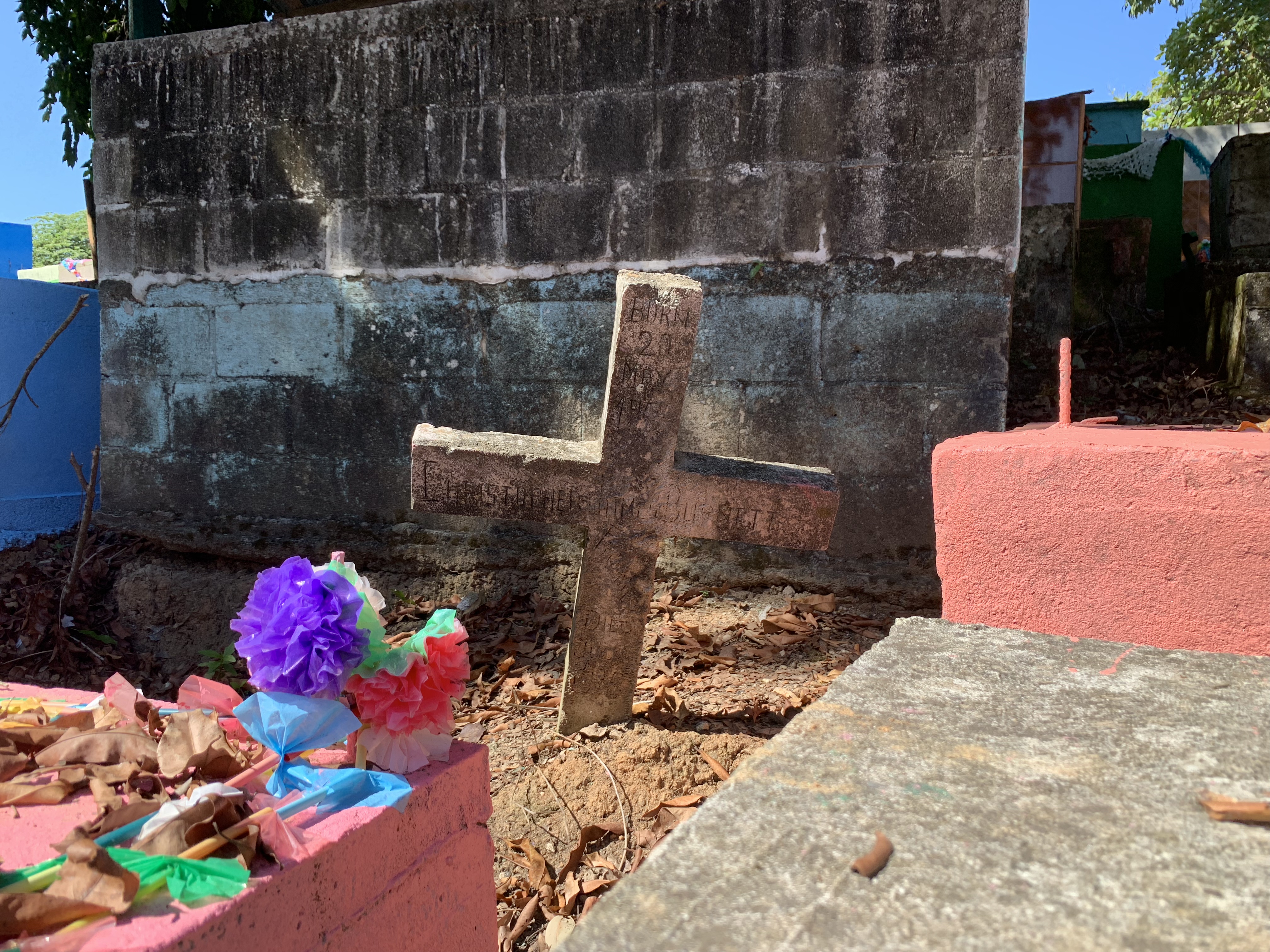 But Penny, who is certain Silas Boston did kill Chris and Peta, said there was a bond between them.

She said: “He and Russell were totally manipulated by their monstrous father. We had all suffered at the hands of this absolute devil.”

During the course of the 2016 investigation, it was claimed that the graves in Puerto Barrios cemetery, in Guatemala, couldn’t be found, which delayed Boston’s arrest by several months.

But in episode nine of Paradise, which was released last week, listeners hear the emotional moment when Dan and Penny track down Chris and Peta’s final resting place. 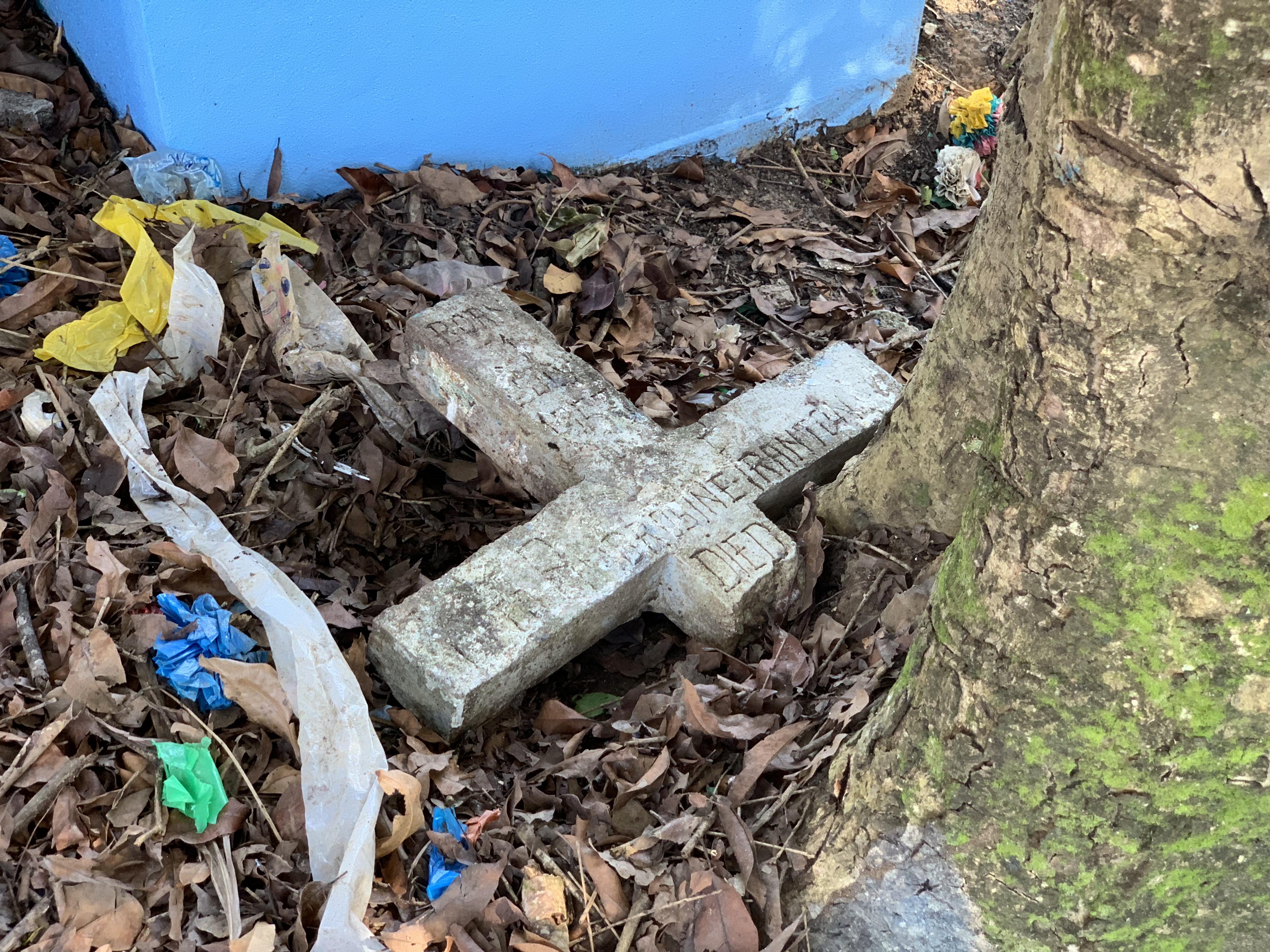 Equipped with a detailed description and a photograph from an American pastor who had visited the graves in 1984, they clambered over tombstones and litter to reach the picturesque corner where the simple concrete crosses stand.

Penny said: “They were under beautiful Guatemalan Ceiba trees, next to green fields, not dissimilar to the English countryside. In the field, there was a farmhouse with reggae music blaring out and a cockerel crowing.

“We were both pretty gobsmacked that we found them. It was amazing, it made the trip, the icing on the cake.

"I’m not religious but I feel very privileged to have had the opportunity to go there and stand next to what was Chris.”

Dan added: “It was not an easy thing to organise, and it seemed so hopeless, that to actually find them was quite overwhelming. I was pretty choked at that point.

“It was one crowning moment of many, but there is so much more to this story. It’s an incredible tale.” 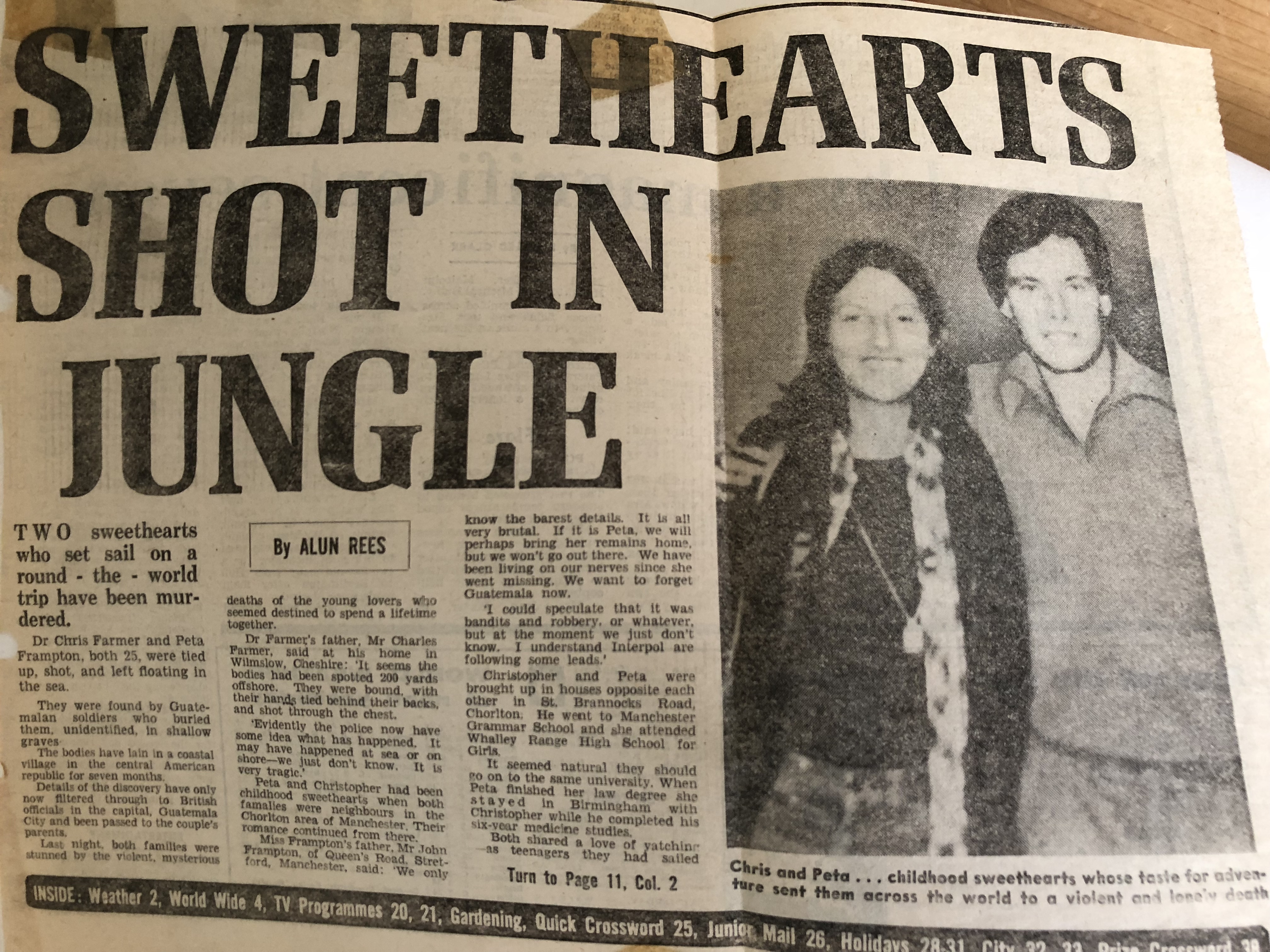 40 year search for the truth

That would be a satisfying ending to Penny’s 40-year search for the truth. But the celebration was momentary.

There’s no escaping the thought that, had the bodies been found by the authorities, maybe Boston would have lived to go on trial and the family could have seen justice delivered.

MOST POPULAR IN NEWS 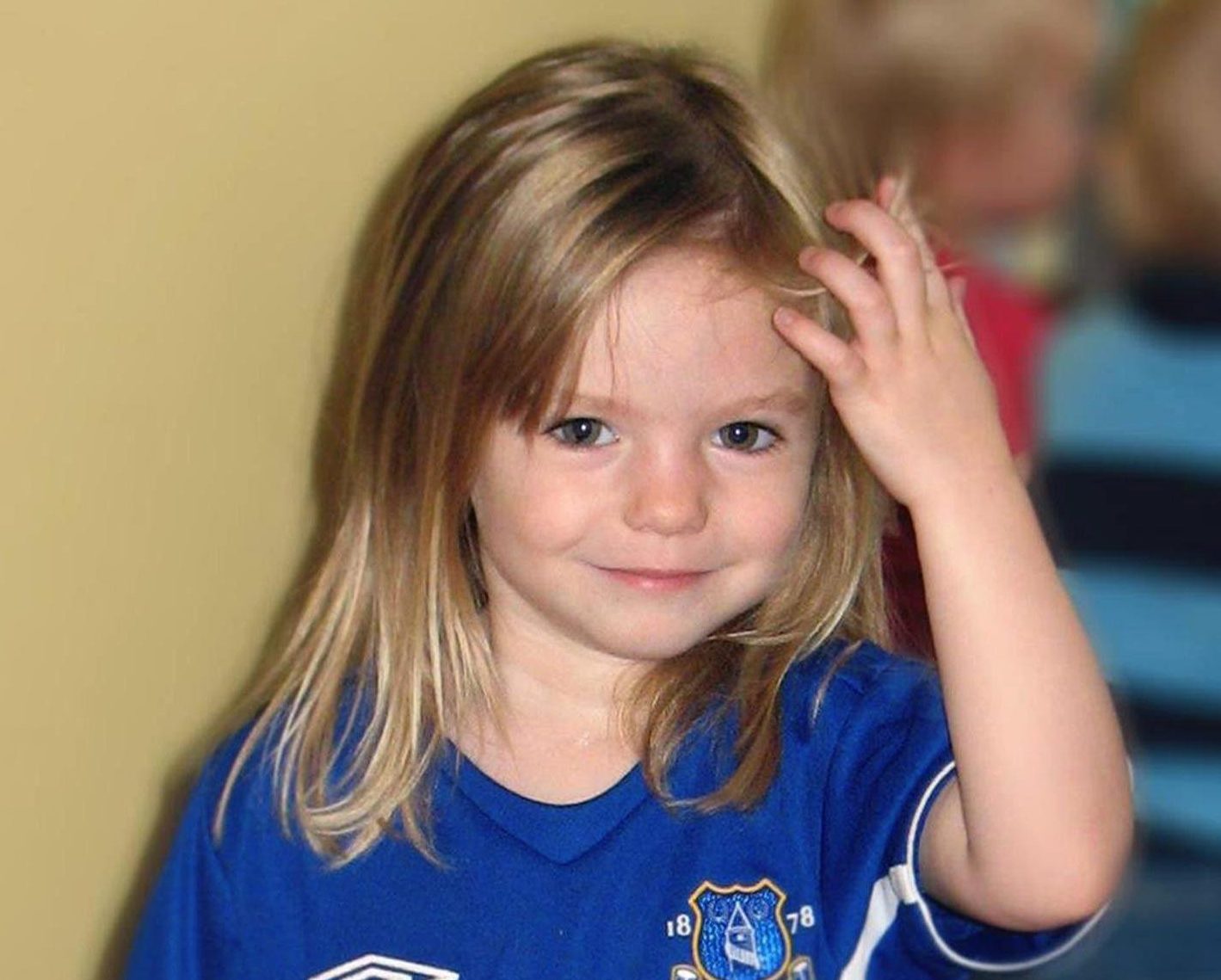 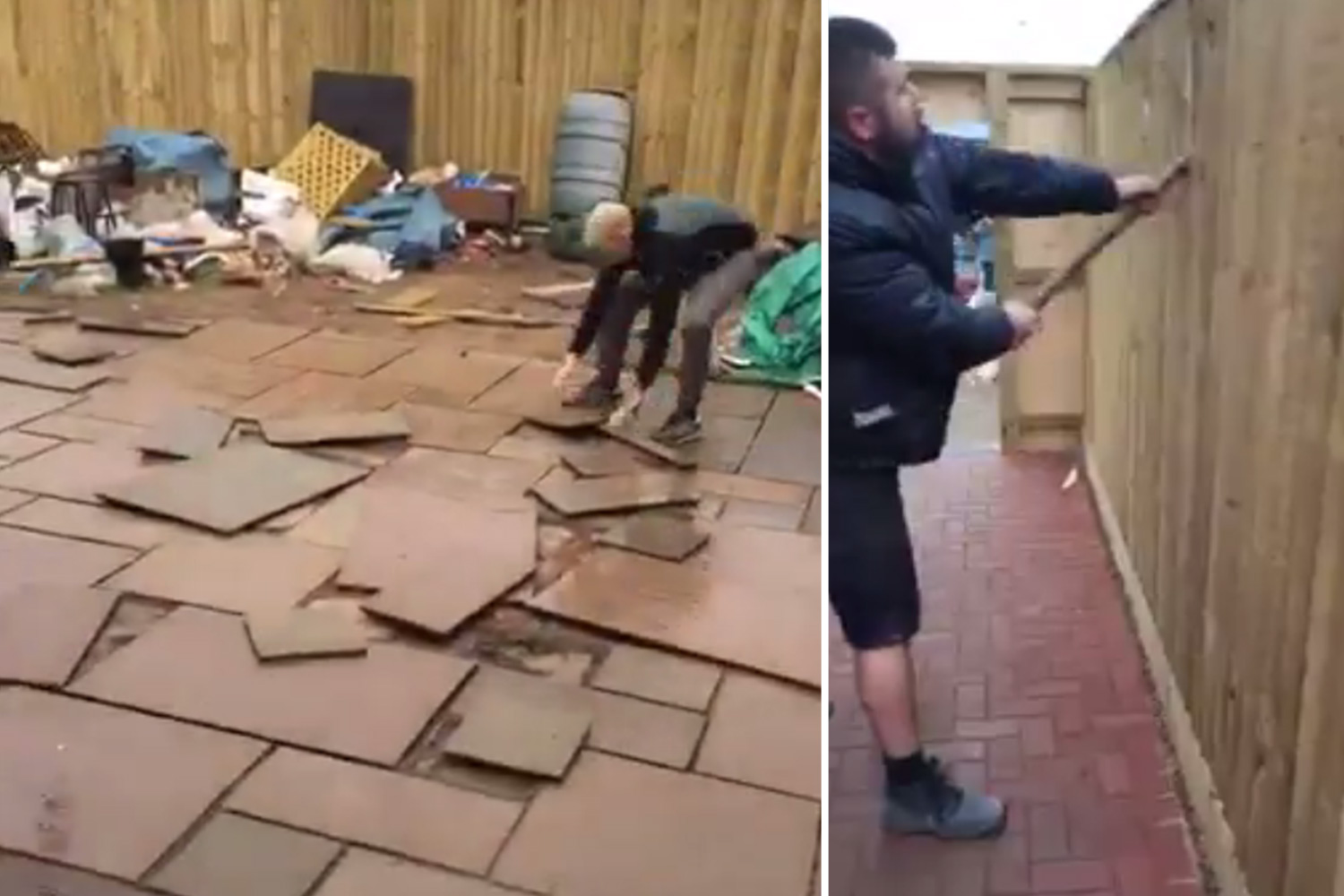 Penny said: “It was a body-less crime at that point. I shudder to think that, had the case gone to trial, we could have lost because the bodies had not been found.”

“We desperately wanted our day in court.

“People talk about closure but you get to the end of the story, and you still feel that pain. It’s closure in the sense that Dan’s podcast has given us most of the answers we were looking for, and we’re so grateful to Dan for that. He’s done an extraordinary job.”

BBC 5 Live podcast Paradise is available on all podcast apps including on BBC Sounds.