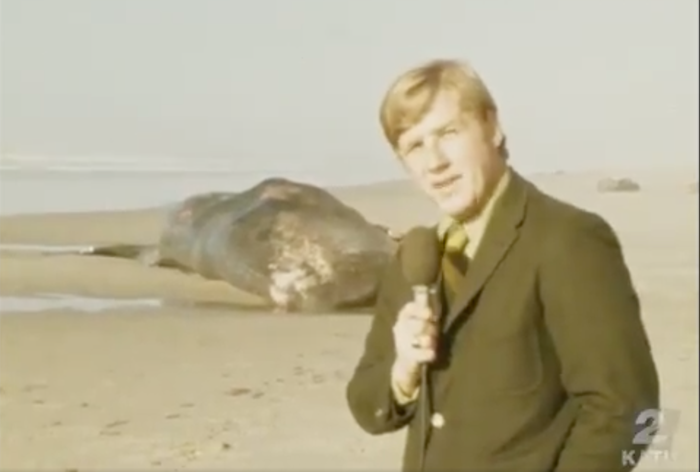 Fifty years ago, television reporter Paul Linnman stood on a beach in Florence, Oregon, reporting on the dead 45-foot, 8-ton sperm whale that had washed up on shore.

Officials from the state were deciding on how to remove the massive, stinky carcass from the beach, when a state Department of Transportation engineer had an idea: they would blow it up.

When they did, Linnman and spectators within at least a quarter-mile radius were struck by chunks of whale guts and blubber that fell from the sky. A car more than a quarter-mile from the site of the explosion was crushed by one of the pieces, Linnman said in his broadcast, which was aired again by KATU this week.

The legendary scene became a pop culture phenomenon and a point of pride for Florence. This year, the town voted to name a park after the whale, The Washington Post reported.

Linmann, who was 23 when the story broke, had his career marked by the event.

"I was asked about it almost every day of my life, by everybody," Linnman recently told KATU, for their anniversary special of the historic local event. "I wrote a a book about it, and used the book to talk about other things that I was more excited about in journalism."

Ultimately, officials learned that not enough dynamite had been used in during their attempt to blow up the carcass.

Their discovery was too little, too late.

The engineer who came up with the plan, George Thornton, later complained that his colleagues had abandoned him to go hunting and the job to figure out how to dispose of the whale fell to him.

"To be fair, they had plans to go, but this thing made them all the more anxious to go,'' Thornton was quoted in his 2013 obituary as having said.