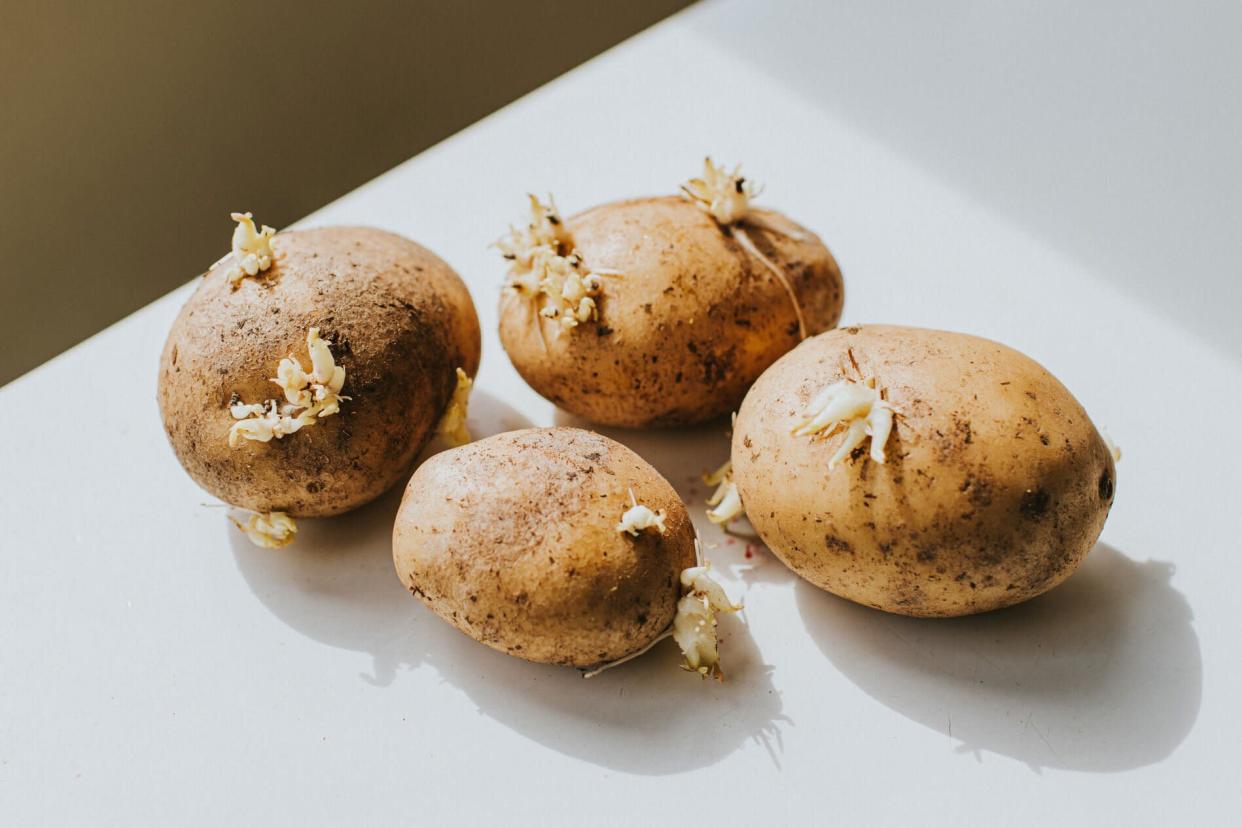 Raise your hand if you’ve ever gone into the pantry to grab ingredients for dinner, only to find the potatoes you were going to mash now have “eyes.” Sure, they’re a little odd looking, but are they safe to eat if you want those mashed potatoes anyway? Or should you just go ahead and send them to the dumpster?

The long and short of it is that—yes!—sprouted potatoes are usually safe to eat. But you are going to want to trim those tiny growths before you cook the spuds.

Keep reading to find out how to safely cook sprouted potatoes. Plus, discover the reason they grow in the first place—it’s actually rather interesting.

Are Sprouted Potatoes Safe To Eat?

Yes, sprouted potatoes are technically safe to eat, but you are going to want to remove those unsightly sprouts first.

“The sprouts contain concentrations of glycoalkaloids, compounds that when you eat a lot of them can cause some toxic effects,” said Bryan Silness, senior culinary content associate at Pampered Chef, where he directs the test kitchen and has a background in food science.

You also want to check out the potato’s general condition.

“If it feels soft to the touch or wilted or wrinkled, throw it away,” said Silness. You can also throw it into your garden if you are industrious! Sprouted potatoes can grow into potato plants.

If you cut into a potato and it looks green, you should toss it.

“It may not be from the glycoalkaloids, but rather chlorophyll that develops when potatoes are exposed to light after harvest,” said Silness. While that bit of green isn’t dangerous to your health, it can add a bitter and grassy flavor to your creamy mashed potatoes, so better off not using it.

Why Do Potatoes Sprout?

This all comes back to where potatoes come from and what they need to grow. Potatoes don’t always need dirt to grow like other plants and foods might, but they do need darkness and moisture.

So that means that even if a potato is not in the dirt, but is in a dark and moist place—and that includes your kitchen pantry—they can sprout. They think they are in the ground, and they are doing their job by growing. How wild is that?

How Do You Remove Sprouts?

Thankfully, removing the sprouts from a potato is easy. You can snap them off by hand, or use veggie peelers.

“[Vegetable peelers] are great because they have sharp tools to dig out the eyes and base of the sprouts while also having a peeler to use after they’re cleaned up,” said Silness.

Removing sprouts is generally easiest to do during the cleaning process, so you’ll want to take the time to rinse off those potatoes under running water to get rid of any dirt on the skin.

“Use the sharp edge of the tool to dig out the eye. Try to get all of it, even though your potato may look a little moon-like! Once you have finished peeling them, make sure to rinse them under running water again to ensure all the bad stuff gets washed off,” said Silness.

In storage, potatoes need air to breathe. That’s why so often they are sold in mesh-like bags.

“If you buy them from the produce section of your grocer, transfer them to a breathable bag, like paper or mesh, or put them in a cardboard box, and stash in a cool, dry place,” said Silness. You’ll want to avoid anywhere too hot and humid because that’s how you get potatoes to sprout in the first place.

But potatoes don’t always do great in spots that are cold either. They are sort of like The Princess and the Pea in that way. That’s why potatoes shouldn’t be stored in the refrigerator.

“The cold temperatures can cause the starches to convert to sugars and turn brown when they cook, just like a banana as it ripens,” said Silness.

When To Toss Sprouted Potatoes

The ideal potatoes are firm and have nice, tight skin. Those are the potatoes you want for your baked potatoes or wedges and fries.

Anything that is not that is ready to be tossed. Potatoes that are soft, mushy, squeezable, or moist are past their prime. “If you cut into a potato and it looks green or brown throughout, you should throw your potatoes away,” said Silness.

If it’s just a few blemishes, those can be trimmed off, and the potato can be salvaged. But if the whole potato looks suspect? “See you tater!” said Silness.