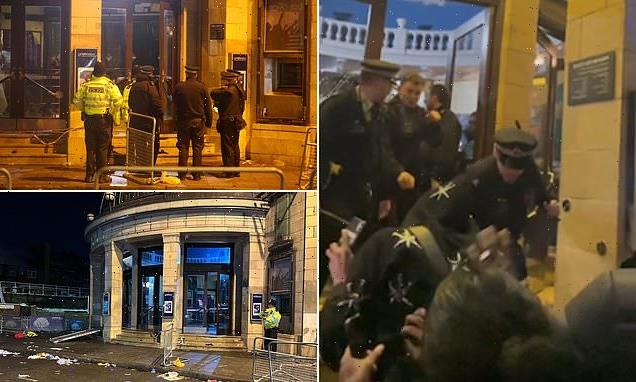 An inquiry has been launched into claims security guards at the O2 Academy Brixton had taken bribes to let people in without tickets at events before a fatal crowd crush.

The Security Industry Authority (SIA) says it is looking into allegations of corruption at the venue, which has been closed since two people died at a show on December 15.

Security guard Gaby Hutchinson, 23, and Rebecca Ikumelo, 33, were fatally hurt when fans without tickets tried to enter a show by Nigerian artist Asake at the south London site.

A police probe into the incident was launched, and on Monday the venue had its licence suspended for three months while the investigation continues. 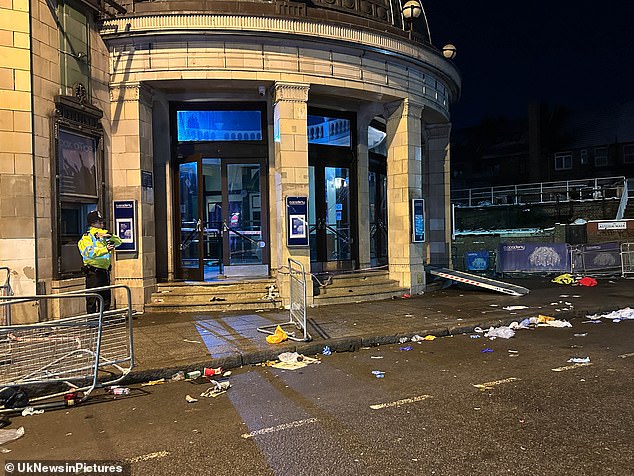 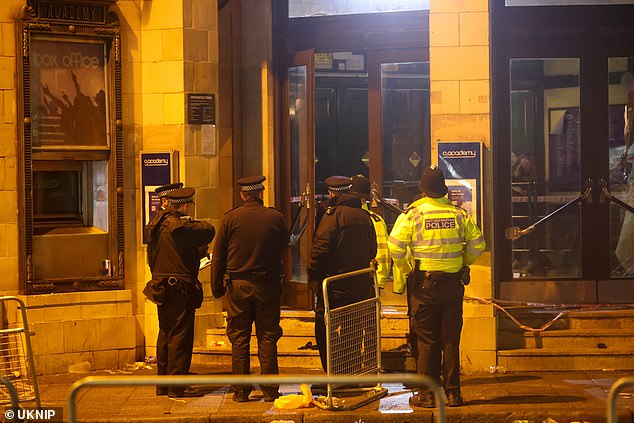 Police stand outside the venue, which has had its licence to operate suspended for three months by Lambeth council

A whistleblower at firm AP Security told the BBC that members of his team would often allow hundreds of extra revellers into venues in exchange for cash.

The guard, who did not reveal his real name, alleged some of his colleagues made up to £1,000 and that the firm ‘knew the people who were doing it’.

In the BBC programme, File On 4: Catastrophe At The Academy, the security member, who used the alias Rohan, also claimed there were just 110 members of security in attendance that night, when they should have had 190.

‘There were people taking money… Some staff made £1,000 cash,’ he told the programme.

‘Our company knew what was going on and they knew the people who were doing it,’ he added, ‘and they did nothing about it.’

There is no suggestion that Ms Hutchinson, who was working as a security guard on the night, took bribes or let anyone in without valid tickets.

Paul Fullwood, SIA director of inspections and enforcement, said on Wednesday that the body was assisting the Metropolitan Police with its investigation into the tragedy.

He said they had seen media reports following the broadcast of an episode of BBC File On 4: Catastrophe At The Academy, which alleged that security staff at the venue took bribes.

Mr Fullwood said: ‘As the regulator of the private security industry in the UK, we take allegations of corruption by security operatives extremely seriously. 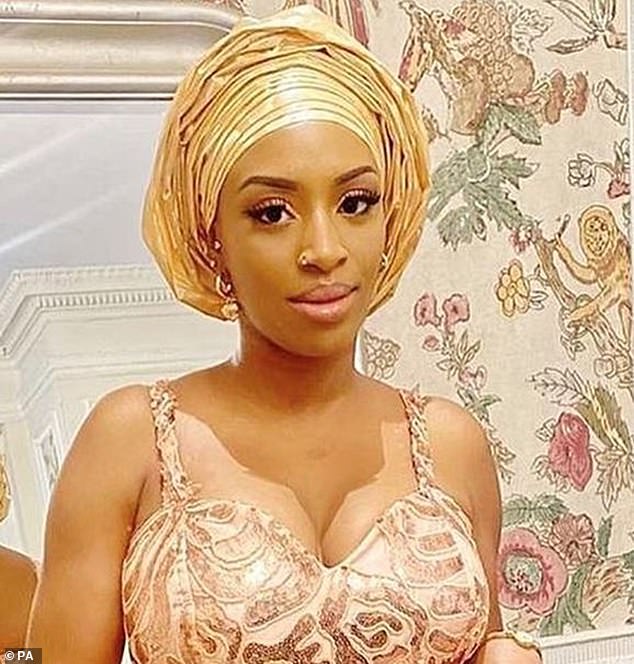 Rebecca Ikumelo, pictured, was one of two people who have since died from injuries received in the crush 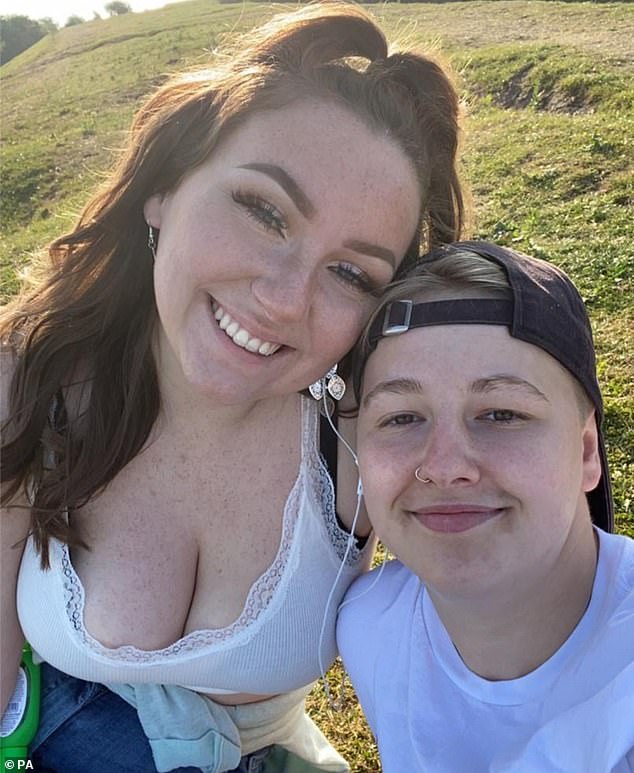 Gaby Hutchinson, right, who had been working as a security guard at the venue on the night of the incident, died from her injuries sustained in the crush

Mother-of-two who died in Brixton Academy crush was an autism campaigner who offered parenting tips on TikTok: Click here to read more 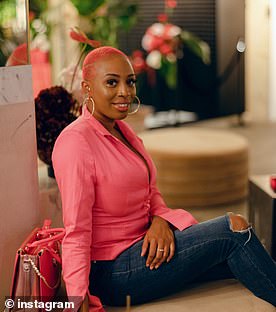 ‘We have today launched an inquiry into these allegations which appear to extend beyond the Brixton O2 Academy.

‘We will also review licensing arrangements and take appropriate action against any individual or company carrying out such practices as part of our regulatory licensing responsibility across the private security industry.’

On Monday the venue had its licence suspended by Lambeth council’s licensing sub-committee for three months after an application by the Metropolitan Police.

The force applied for the venue to have its licence suspended for three months, for that suspension to include the initial 21-day appeal period, and for no licensed activities to take place there until it has had an application to vary its licence granted by the licensing sub-committee.

Gerald Gouriet KC, representing the Met Police, told the sub-committee that the full extent of the injuries caused by the crush is still unknown.

‘It started at 8pm, so I understand by 9pm a large crowd of about 1,000 people had formed outside the entrance to the premises, to all intents giving the appearance of entering the building,’ he said.

‘Staff at the venue closed the entrance doors and called the police for support. And we have a timing for that call, it’s 9.04pm. The police arrived at 9.16pm.

‘When they arrived, they found large-scale disorder, the crowd pushing against the doors, trying to force them open, which they eventually did. 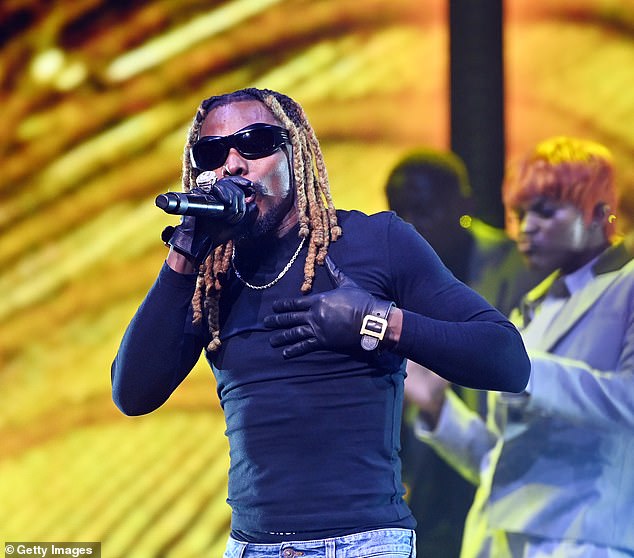 The incident happened when ticketless fans tried to get into a concert by Nigerian artist Asake (pictured) on December 15, last year 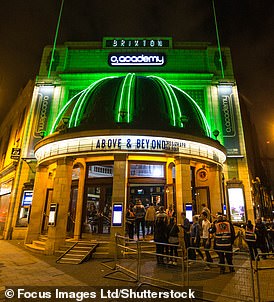 ‘And when the doors were breached, the crowd poured into the lobby towards the auditorium.

‘A number of them fell to the floor. Several – we don’t yet know the total number and that will be found out as the inquiry proceeds – were injured as the crowd surged on and over those who had fallen.’

He added that, as well as the two dead, a third person remains in critical condition in hospital following the incident.

Stephen Walsh KC, representing the O2 Academy’s owner, Academy Music Group (AMG), said his client agreed to the suspension terms as set out by the police.

‘But can I make it clear that AMG agrees to the suspension, as suggested by Mr Gouriet, also to the continuance of the interim steps, that is the shorter suspension to cover the appeal period, and also to the single condition, which Mr Gouriet read out to you a few moments ago.

‘So there is full agreement about that.’

He also offered sympathies on behalf of the venue to those impacted by the tragedy.

‘The O2 Academy Brixton recognises the gravity of the events which occurred on the night of December 15 2022 and expresses its sincere condolences to the families of those who died during that tragic incident and its genuine concerns for anyone affected by it,’ he said.

Chairman of the sub-committee, councillor Fred Cowell, said: ‘The decision of the licensing sub-committee is that the premises licence is suspended for a period of three months from today, expiring at one minute past midnight on April 16 2023.