The state's misconduct watchdog has launched a criminal investigation into the violent arrest of a man at Epping after footage surfaced of him being rammed by a police car before an officer stomped on his head in front of horrified onlookers.

One of the force's most senior officers labelled the use of force as "inappropriate", revealing the 32-year-old man had been waiting 19 hours for mental health treatment at the Northern Hospital before the incident. 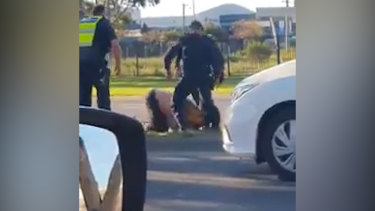 The arrest came as Victoria Police revealed on Tuesday it had been unable to roll out new mental health training for frontline members due to an "extraordinary" year of bushfires and the coronavirus pandemic.

A 24-year old man became the latest person with suspected mental health concerns to be injured during a hostile interaction with police, after being shot by two officers outside a medical centre in Lilydale on Tuesday.

Deputy Commissioner Neil Paterson said both incidents had been captured on the officer's body-worn cameras, as he moved to reassure Victorians that police were there to protect and support the community.

"No police officer comes to work with an intention or desire to use force of any sort throughout their shift. Unfortunately though, our role in both protecting the community and ourselves … does see us use force on occasion," he said.

"It's disappointing and the community should be disappointed if police go beyond what is required as reasonable force."

Footage of the violent arrest in Epping was widely shared online. The 32-year-old father-of-three is recovering in hospital after initially being placed into an induced coma.

The man, who has bipolar disorder, had been attempting to seek treatment at the Northern Hospital while waiting for a bed in the psychiatric ward on Sunday. But after a 19-hour wait he left, smashing the hospital doors on his way out.

Witness footage shows the man walking into the middle of the road, waving his arms in front of a police car. Soon after, he's rammed by the police car and six officers attempt to place him in custody; one stomping on the back of his head. 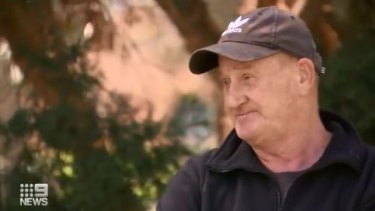 Glenn’s son was at the centre of a dramatic arrest in Epping on Sunday. Credit:Nine News

The member allegedly involved in the stomping had since been suspended with pay and the officer in the car has had his authority to drive on duty withdrawn.

The man's brother, who asked not to be named, said more police should be stood down.

"Kicking someone on the head while they're on the ground with their arms pinned behind them, I don't think that's the right thing to do," he told Nine News.

Asked whether the man involved in the Epping arrest had been failed by the system, Mr Paterson said those were matters for IBAC to examine.

But he said the stomping was an "inappropriate" use of force and the ramming was "concerning".

"I try and put myself in that person's position or a close family member of that particular person, and 19 hours at a hospital seems like an extraordinary period of time to wait, but that's matters for others," Mr Paterson said.

"The man self presented to the hospital for assistance and treatment. I'm unaware as to why he wasn’t treated in a shorter period. But had he been, it may have prevented this incident occurring.”

IBAC Commissioner Robert Redlich said the community was "rightfully concerned" if someone was injured during an interaction with police.

"Given the potentially serious nature of this incident, IBAC has determined it is in the public interest to independently investigate this matter," he said.

The incidents at Epping and Lilydale are the latest in a rising number of violent interactions between police and the state's mentally ill.

In May, a 53-year-old Narre Warren father was gunned down on the Monash Freeway at Dandenong North after lunging at officers with a knife.

In July, Gabriel Messo was shot dead by police after attacking his mother in a Gladstone Park reserve.

Both men had a history of mental health concerns.

When asked about what training police officers were being given around their interactions with the mentally ill, Mr Paterson said police had intended to roll out new specialist mental health training for all staff earlier this year before the bushfire season saw it put on hold.

Now, he said, the coronavirus pandemic meant police were unable to train in groups.

"This mental health training is a priority," he said. "When it's safe to go back into face-to-face scenario training we will absolutely be rolling out this training."

He predicted the state's mental health royal commission would make findings to address the matter, and said more mental health specialists were required to respond to acute incidents.

“They acted in the knowledge they’d probably be recorded. It was a brazen act of aggression."

He said it was “frustrating to hear" police talk about their commitment to rolling out more mental health training for officers.

“If I had a scrapbook for every time police try to explain away bad behaviour with training, it’s a smoke screen and they know it.”

Police are asking anyone who may have witnessed the incident or has dashcam or mobile footage to contact Crime Stoppers on 1800 333 000 or www.crimestoppersvic.com.au.

Our weekly newsletter will deliver expert analysis of the race to the White House from our US correspondent Matthew Knott. Sign up for The Sydney Morning Herald‘s newsletter here, The Age‘s here, Brisbane Times‘ here and WAtoday‘s here.