Warning: This story contains graphic content, and the name and images of a deceased Indigenous person.

Veronica Nelson’s naked body was found cold on the floor of a maximum-security prison cell, her hands clenched like claws.

On the door of her cell was a sign stating: “Do not unlock.”

In the preceding hours, as she struggled in custody with an undiagnosed medical condition and heroin withdrawal, the Indigenous woman buzzed prison staff for help almost a dozen times.

On Tuesday, the opening day of a coronial inquest into her death heard that an officer in her unit “did not have keys to her cell”.

Other prison staff told an ailing Nelson nothing more could be done to help her. 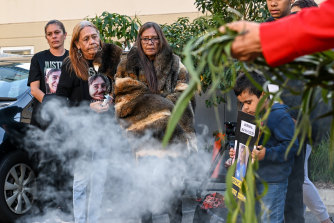 Donna Nelson, wrapped in possum fur, outside the inquest into her daughter’s death.Credit:Joe Armao

“She can be heard crying on the intercom recordings. She was heard screaming out by inmates in neighbouring cells,” counsel assisting the coroner Sharon Lacey said.

Coroner Simon McGregor is examining Nelson’s death as part of a five-week inquest after it was revealed the 37-year-old had unsuccessfully applied for bail on her own, without legal representation, before being held in custody at Dame Phyllis Frost Centre on allegations of shoplifting. 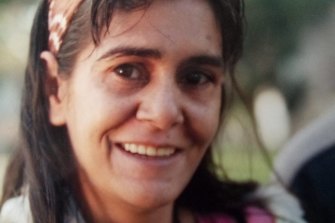 Veronica Walker died in prison in 2020.

On Tuesday, the coroner heard for the first time that a nurse treating Nelson in Dame Phyllis Frost Centre had raised concerns about the inmate’s health and wellbeing, noting she should be taken to hospital. But the following day, Nelson was moved from a medical cell into the general population after the doctor in charge recorded that she looked “generally well”.

She died the following day.

“According to [the nurse], Veronica was unable to sit up in a chair on her own, at times she needed to be physically supported and was frequently incoherent,” Lacey said.

How and why Nelson was moved and why she was not transported to hospital will be examined as part of the inquest, with more than 60 witnesses scheduled to testify.

The inquest heard Nelson was one of 505 First Nations people to have died in custody since findings from the Royal Commission into Aboriginal Deaths in Custody were handed down in 1991. Five people have died already this year. 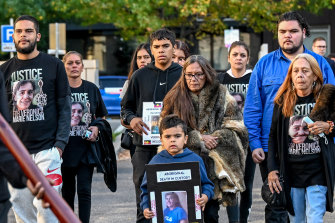 Donna Nelson, mother of Veronica Nelson, with family and friends before the inquest.Credit:Joe Armao

In Victorian prisons, the number of First Nations people has tripled in the past 10 years. More than one in 10 women in prisons are Indigenous, despite comprising less than 1 per cent of the state’s population.

When an Aboriginal person died in custody, Lacey said, the community was reminded of the gap between the health, welfare and opportunities of Indigenous and non-Indigenous Australians.

“A gap that is anecdotally apparent and statistically glaring,” she said.

The inquest was played distressing audio and video recordings that documented Nelson’s time in custody between December 30, 2019, and January 2, 2020.

In the time between Nelson’s arrival at the women’s prison and her death, the Coroners Court heard, she repeatedly buzzed for help, telling staff on numerous occasions she had vomited up her medication and begging for more, alongside some cordial and salt.

Amid her persistent calls for help, she also repeatedly asked to see a doctor before a prison officer told her “things don’t always go to plan”. Another later told her she was “disturbing” other inmates.

“We don’t have the keys to open the door,” one officer can be heard saying.

Another later said: “Go and have another shower. I can’t give you anything else.”

“I need help … badly, Miss, badly,” Nelson replied, before she was heard calling out for her late father.

Nelson’s body was found about 7.30am on January 2, 2020. She was in a fetal position on the cell floor, with the shower and the cell flooded.

Attending paramedics believed she had been “passed for quite some time”.

An autopsy later found she weighed 33 kilograms and had a grossly dilated and distended stomach. She had the undiagnosed condition Wilkie syndrome, which restricts the arteries and can cause dehydration.

Tuesday’s inquest opened with a welcome to Country before the piercing sounds of wooden clapping sticks and a didgeridoo echoed through the building.

Friends, family and supporters of Nelson filled five rows of the courtroom where Nelson’s mother – Aunty Donna Nelson – broke down as she described her daughter as a loyal woman who was deeply connected to her culture. She took the opportunity to call for change to stop people dying in custody, criticising a “broken” criminal justice system for letting her daughter die.

“Veronica’s spirit lives within me,” she said.

Images and audio contained in this story were released to the media with permission from the family. For 24/7 crisis support run by Aboriginal and Torres Strait Islander people, contact 13YARN (13 92 76).