Kuala Lumpur: The world is set to face 1.5 disasters a day – 560 a year – by 2030, as humans put themselves on a “spiral of self-destruction” by heating up the climate and ignoring risk, pushing millions more people into poverty, the United Nations warned on Tuesday.

In the past two decades, between 350 and 500 medium-sized to major disasters were recorded annually, but governments are “fundamentally” underestimating their true impact on lives and livelihoods, according to a biennial UN report on disasters. 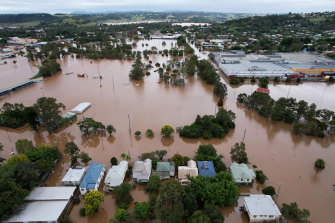 Despite calls for a national warning system across emergency services being made in 2004, it has only just started to be rolled out.Credit:Getty

“Raising the alarm by speaking the truth is not only necessary but crucial,” said Mami Mizutori, head of the United Nations Office for Disaster Risk Reduction (UNDRR), which published the Global Assessment Report 2022.

“The science is clear. It is less costly to take action before a disaster devastates than to wait until destruction is done and respond after it has happened,” she told the Thomson Reuters Foundation.

The UN-backed Intergovernmental Panel on Climate Change warned this year that climate change impacts, from heat to drought and flooding, are set to become more frequent and intense, damaging nature, people and the places they live.

But measures to slash planet-heating emissions and adapt to global warming are both lagging, the panel said. 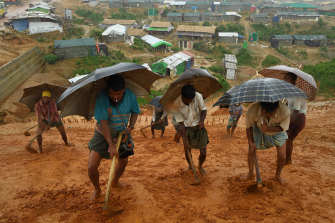 In preparation to battle the monsoon flood waters in Myanmar, a group of men work in the rain to create drainage on the side of a cliff.Credit:Kate Geraghty

The new UNDRR report said increasingly frequent and intense disasters have killed or affected more people in the last five years than in the previous five-year period, and could push an additional 100 million people into poverty by 2030.

The report covers different types of disasters caused by natural hazards – from floods, droughts and storms to earthquakes and epidemics.

“The world needs to do more to incorporate disaster risk in how we live, build and invest, which is setting humanity on a spiral of self-destruction,” said Deputy UN Secretary-General Amina J. Mohammed in a statement.

Disasters have cost an average of about $US170 billion each year in the last decade, the report said, with developing nations and their poorest people suffering disproportionately.

Those countries already lose an average of 1 per cent of their gross domestic product a year to disasters – ten times more than high-income countries, the report noted.

Asia-Pacific nations are worst hit, with a 1.6 per cent annual GDP dent, said the report, published ahead of a global disaster forum on the Indonesian island of Bali next month.

In the Philippines, for example, millions of people are still recovering from Typhoon Rai, which struck in December, killing over 300 people and leaving hundreds of thousands more displaced, along with about $US500 million in damages.

To help the most vulnerable groups, politicians and decision-makers must commit to more ambitious climate policies and accelerate the shift to green energy, said Mary Joy Gonzales, a project manager at aid agency CARE Philippines. 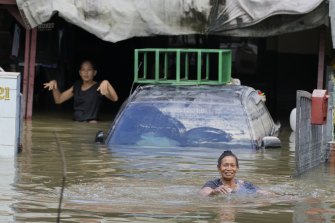 Residents are trapped at their house affected by a flood in Shah Alam, on the outskirts of Kuala Lumpur in 2021.Credit:AP

“The most at-risk (people) to extreme climate events and natural hazards are those living in urban poor communities, marginalised rural areas and isolated locations,” she added.

Maarten van Aalst, director of the Red Cross Red Crescent Climate Centre, said countries must stop “managing each crisis as a separate surprise”, and instead invest in building systems that can help people cope with climate threats.

“Sadly, those who are worst affected have the least resources to address the increasing hazards,” he said. “To really reduce risk, we must also reduce inequalities.”

With many developing countries still grappling with the economic impacts from the pandemic, on top of rising debts and inflation, UNDRR’s Mizutori called for more global help.

“These countries are in need of much greater international support so that they can prioritise prevention from multiple disaster risks and build their resilience,” she said.