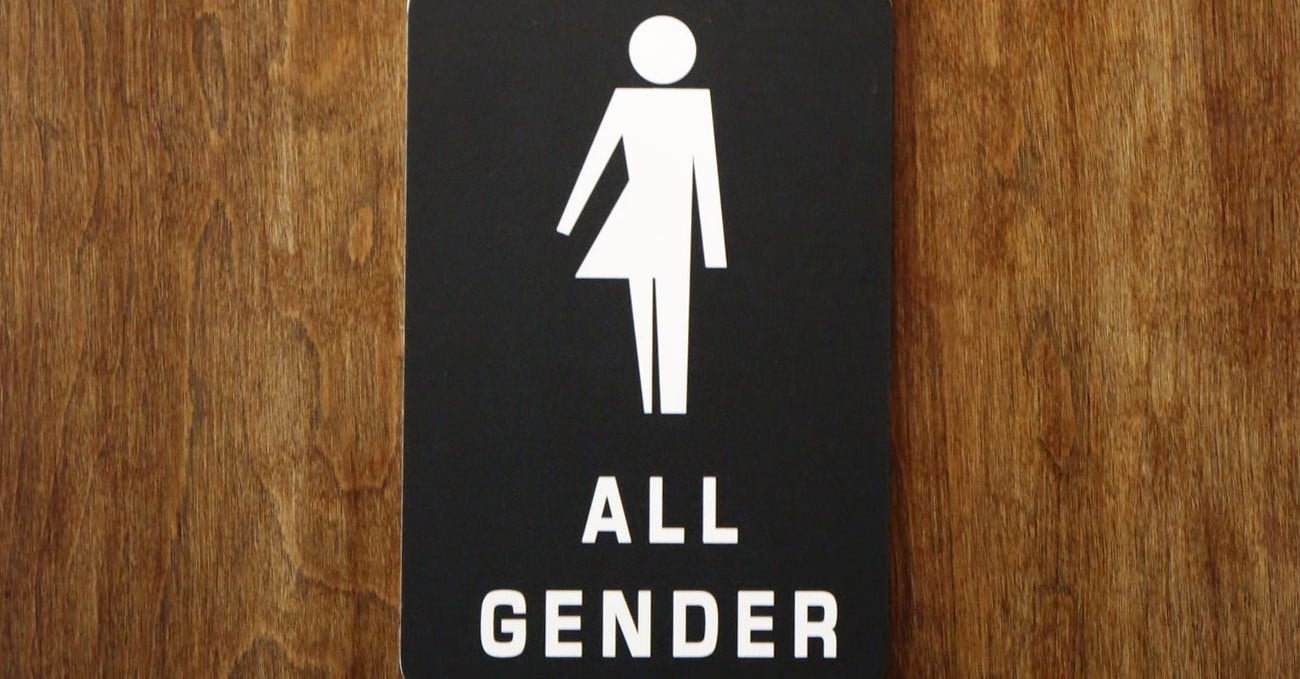 Whether intentional or not, the way we speak is political.

I’m not talking about saying out loud who we voted for or what we think about health care — I’m talking about something far more basic: how we address other people. Do you default to the casual “guys” or the more old-fashioned “folks”? When speaking with a grown woman, do you ever refer to her as a “girl”? With a queer person, do you ever say “Hey, girl!” in solidarity of your shared love (actual or, worse, assumed) of RuPaul’s Drag Race?

If you answered “yes” to any of those things, you haven’t necessarily done anything wrong; you’ve just wandered into the increasingly concerning world of gendered language in an society that is becoming less and less gendered. Everywhere we look, the very idea of gender is being questioned in fundamental ways: Washington DC is granting nonbinary drivers licenses. The Tube in London is shifting to gender-neutral announcements. Target has recently announced nongendered kids clothing. Vogue confused the meaning of gender fluidity, even if it was in a well-meaning attempt to honor such notions. The good news? This is a problem with very actionable solutions.

Why Is the English Language So Gendered Anyway?

Celeste Mora knows this struggle around language and gender very well. As Grammarly’s head of social media and community, she is constantly fielding questions about dos and don’ts regarding gendered language from those seeking answers to questions they may never have considered before. What are the proper ways to use the singular they? Which gender-neutral words are best to use? Are there more formal neutral pronouns?

The answers aren’t that obvious and, unfortunately, English doesn’t naturally lend itself to nonbinary ways of speaking. “English has a disadvantage,” Mora told POPSUGAR. “We don’t have a lot of gender-neutral options that sound good.”

As Mora explained, this is based in English’s “romantic-language roots,” which makes our shift from binary to nonbinary so difficult compared to other languages. Take Turkish, Hungarian, Finnish, Persian, and more: those languages are relatively genderless.

The limited nature of the English language is exactly where frustrations form for persons who don’t fit into the gender binary of cisgender males or females. C Mandler runs into this frustration frequently as a nonbinary transgender person who uses they/them/their pronouns. “The original way words were used were definitely patriarchal and cis and straight, developed by white men who wanted to create a standard of speaking,” Mandler explained to POPSUGAR. “But the beauty of language is that it does have the capacity to change.”

Mandler, a GLAAD campus ambassador, sees the singular “they” as a perfect fit for their identity as a person who lives “homonormatively.” Moreover, they find a comfort in “they” being an everyday word. “It’s already a commonplace word,” Mandler said. “For all the people who say ‘they/them isn’t singular,’ we use it all the time colloquially.” An example of this is in situations when an unknown person leaves something behind. You would say something to the effect of, “I don’t know who left their stuff. Hopefully they pick it up.”

Cassy Olson, who is nonbinary identifying, often takes to YouTube to share their thoughts on the matter on YouTube. “People tend to be afraid of the unknown and things they aren’t used to,” Olson told POPSUGAR. “Pronouns, while a very small thing in our language, provide a sense of comfort and security for those who need it.”

Yet, due to our understandings of the English language, less common pronouns tend frazzle some minds. Dr. Lee Airton — Assistant Professor of Gender and Sexuality Studies in Education at Queen’s University and founder of both They Is My Pronoun and the No Big Deal Campaign — finds this may be the result of people needing to think a little more before they speak or write. “You’re making people think about something they ordinarily do not think about, and that is difficult,” Airton said, before remarking that assigning pronouns and making these decisions are natural for all of us until it made known. At that point, it’s seen as requiring “extra effort” in speaking. “That’s very disorienting for folks,” they added.

How Can You Avoid Using the Wrong Pronouns?

University of Sheffield philosophy Professor Jennifer Saul explores the intersection of feminism and how we speak and how society’s operating male-first effects linguistically hurts us all. When we default to using male pronouns and terms, it necessarily excludes women from the conversation. “It does seem that people are more likely to picture a man when they encounter a term[s] like this,” Saul told POPSUGAR. “Women are less likely to picture themselves in the role discussed. It’s not hard to see how this could have damaging effects in something like a job ad.”

“Some words carry clear derogatory meanings with them,” Saul added. A good example of a charged word girl — it’s an appropriate term for a female-identified child but potentially insulting or derogatory to lob at an adult women or an LGBT person. “Some members of the groups referred to use these terms affectionately and insist that this is OK,” Saul said. “But . . . this sort of reappropriation is something that you have be a member of the group to do.” (Even then, it might still rub other members of the same identity group wrong.)

So how does one proceed in speaking about and to people in a sympathetic, supportive way? Simply seek to be polite and as inclusive possible.

Those we spoke with for this story agreed that the singular “they” is always safe to use. “It’s a gender-neutral pronoun that comes completely naturally to speakers of English,” Saul said. “Think about a sentence like ‘When a student arrives, they should pick up a handout.’ It just rolls off the tongue and doesn’t feel the slightest bit awkward.”

Moreover, “they” has recently earned even more legitimacy as a pronoun; AP added the pronoun to its Stylebook earlier this year. The pronoun is favored by some transgender, nonbinary, and genderqueer persons but is only one of a handful of neutral pronouns, words like per, ve, xe, ze, (f)ae, and more can also be used. While it’s easy to default to “they,” one can never be too sure of a person’s preferences. And if you’re not sure? It’s usually OK to just ask.

Dr. Airton echoed this, noting why asking is so important and why this can be so weird for some. “It’s important to respect identities,” Airton said. “These little interactions are about so much more than pronouns; they’re about people feeling awkward and trying to recover. A lot of this stuff is about face-saving or feeling like you’re in control.”

When addressing groups, the matter can get much more complicated and, in some ways, undeniably fusty. “Things like folks — although that sounds 1955 — is good,” Grammarly’s Mora said. “I say ‘humans,’ which may not seem popular, but ‘peeps’ and ‘people’ are good too.” Despite the awkwardness of these words, Mora insisted that the more we use them, the less weird they will sound.

Another gender-neutral elephant in the room when addressing groups is our favorite term, “guys.” It’s a difficult word to stay away from but, unfortunately, is loaded. “I would think before deploying ‘guys’ at will,” Mora said. “The same with ‘ladies.’ Maybe think about it before you use it at random.”

“It can be very hard to stop using some of these terms,” Saul said. “I myself find the use of ‘guys’ for mixed-gender or even all-women groups almost irresistible and automatic, even though I try not to do it.”

Along with “guys,” there is a myriad of words that are both too informal and too specific. For Mora, those range from generic classifiers — like “girl,” “boy,” “dude,” and “lady” — in addition to anything taxonomized by gender, specifically career-related. “Businessman, fireman, policeman, stuff that ends in ‘man,'” Mora said. “Those are probably better to err on the side of gender-neutral alternatives. It’s likely if you’re writing that word, you don’t know the person well because you’re writing about someone you don’t know.”

Why Does It Even Matter? Because Respecting Other People — Like Their Pronouns — Matters

Reconsidering how we address each other in relationship to identities is a big deal, one certainly tied to politics. When linguistically tricky situations arise, both Mora and Saul agree that being aware that something is problematic is a great first step toward change.

As Saul said, instead of shaming someone who uses the wrong pronoun to address you or someone else, address it as a growing problem to be aware of. “We should be aware that this sort of usage is something that people of goodwill slip into,” Saul said. “If we’re going to point it out, we should point it out as a culture-wide issue not an individual failing.”

This is a sentiment everyone can agree on. Airton believes thinking this way indicates work being done — but that doesn’t mean someone is off the hook, particularly if someone makes a correction. “Exercise compassion,” Airton said of situations where corrections — or even explosions — happen. “Do your level best to not take it personally. I also call on my fellow trans people to have compassion as much as they can. . . . Recognize a good-faith mistake vs. intentional misgendering.”