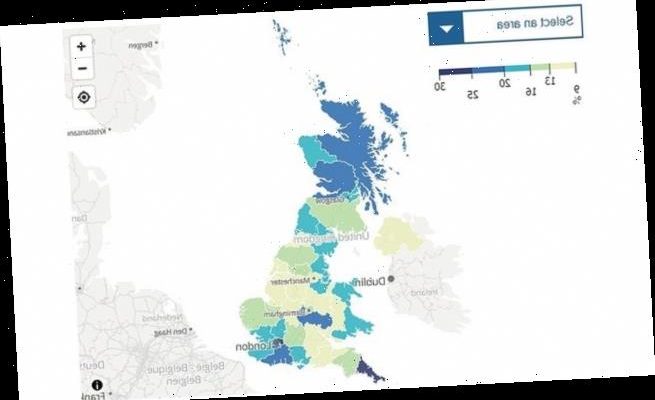 How many people are STILL furloughed in your area? ONS map reveals the areas of the UK where most people have been off work in the latest lockdown

A new interactive map sheds new light today on how companies across the UK have been affected by the coronavirus.

Analysis by the Office for National Statistics shows that ‘single site’ firms in Scotland have furloughed a higher proportion of their staff than in any of the other home nations as a whole.

But a breakdown by the ONS shows that Cornwall and Outer London West are the two local areas with the highest rate of furlough in the UK.

This could be linked to their reliance on the tourism and international travel trade through Heathrow Airport respectively, which have both been at a standstill.

Surrey and Sussex were also high on the list, as were the Highland and Islands of Scotland.

But a vast swathe of the Midlands and northern England are seen as among the least badly hit according to the ONS date, which covers the period between February 22 and March 21.

Use the ONS’s interactive map below to find out how things are in your area. 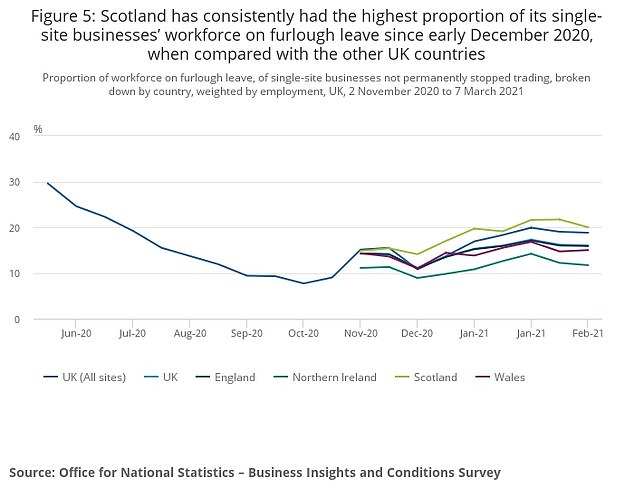 Analysis by the Office for National Statistics shows that ‘single site’ firms in Scotland have furloughed a higher proportion of their staff than in any of the other home nations as a whole.

Staff at small businesses in the hospitality and tourism industry are four times more likely to have been furloughed as those in other parts of the economy, new figures reveal today.

The ONS found that more than six in 10 workers in the industry were currently off work on 80 per cent pay, compared with just 16 per cent of all businesses.

The study looked at ‘single site’ firms which make up the vast majority of UK firms.

The hospitality sector saw a 23 per cent fall in firms trading between December and January, when lockdown kicked in, from 64 per cent to 41 per cent.

It rose to 48 per cent this month, but is still below the 74 per cent figure for all businesses.

The survey also found hospitality firms  were more likely to have three months of cash reserves or less remaining, at 43 per cent in mid-March 2021, compared with 35 per cent across all industries.

The data is for firms with a single trading site, who make up 98 per cent of all businesses in the UK. More than 27,000 were polled.

The ONS report noted: ‘The proportion of single-site businesses’ workforce on furlough leave across the UK gradually increased from early December 2020 to late January 2021.

‘Before coronavirus restrictions were introduced in late December 2020, all four countries saw the lowest proportion of their single-site businesses’ workforce on furlough leave in early December 2020, at 11 per cent across the UK.

The average daily death toll is now 63 – 95 per cent below January’s peak. It stands at the same level as late last June – shortly before the ban on indoor socialising ended following the first national lockdown.

However, customers must still wait a minimum of seven weeks before pubs, restaurants and hotels can fully reopen. Foreign holidays are also banned until at least May 17.

It came as forty MPs, including former Cabinet minister Karen Bradley, sent the Prime Minister a letter urging him to avoid delaying the ban on travel.

The group of cross-party MPs warned that the country would not fully recover without a thriving tourism, travel and aviation industry and told the PM that foreign holidays were essential for the country’s economic rebound.

They stressed that it was ‘paramount that the restart of international travel provides the opportunity for businesses in the aviation, travel and tourism industries to begin their long journey back to recovery’.