MORE than 140,000 people died when the US used a nuclear bomb on the Japanese city of Hiroshima some 76 years ago today – but for the survivors the horrors had just begun. 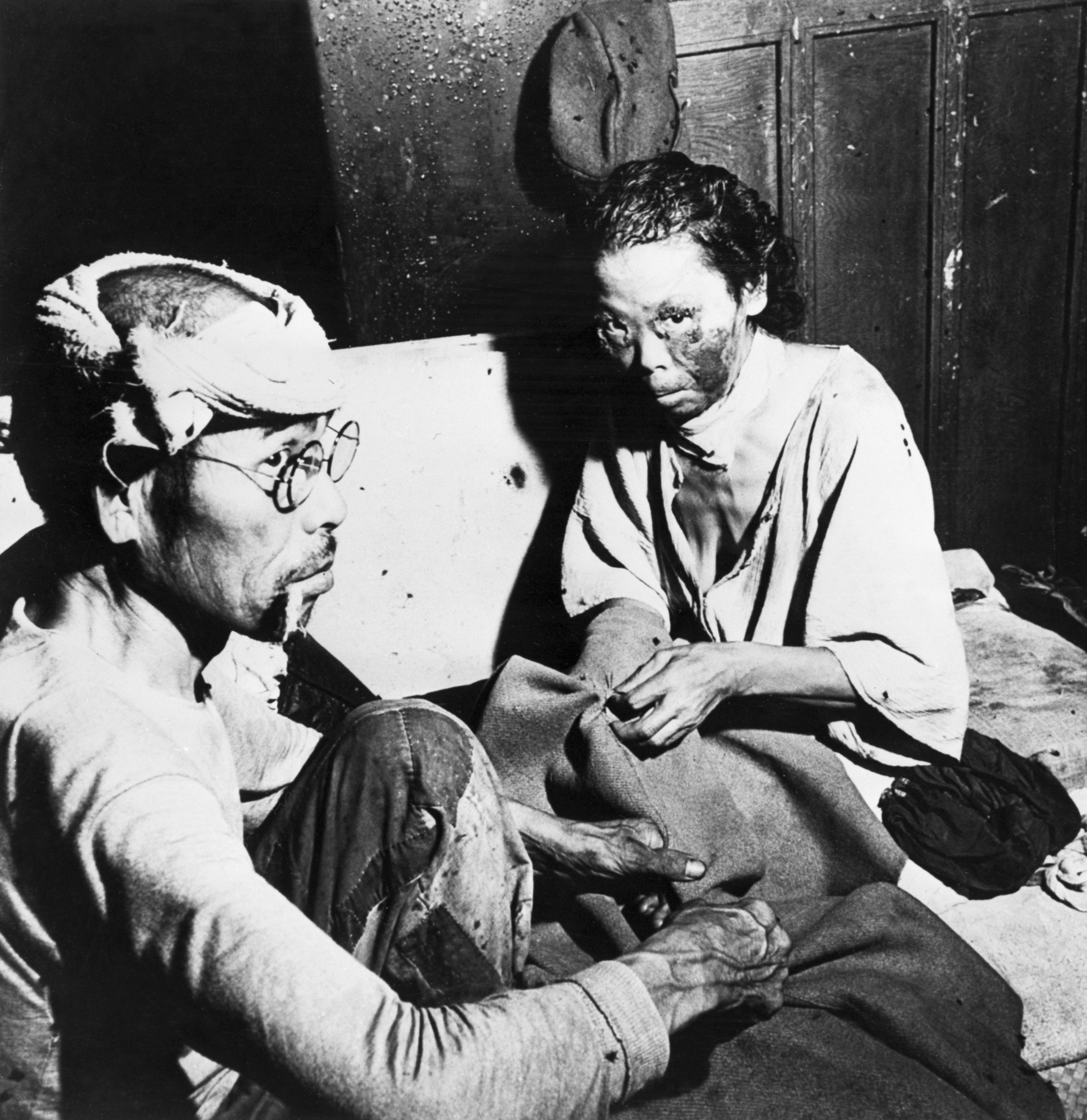 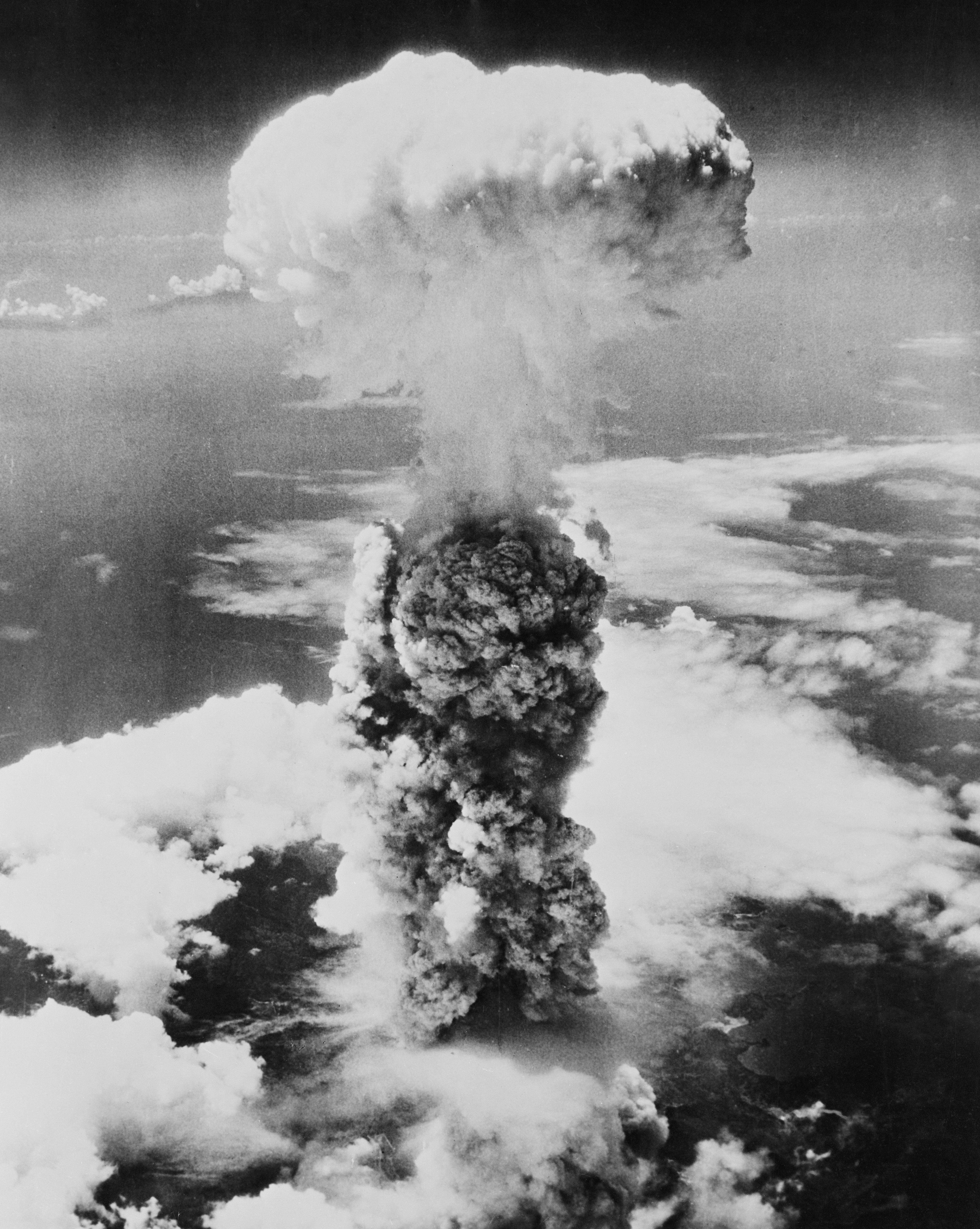 The phrase describes some of the most horrifically injured people in the aftermath of the nuclear fireball from the "Little Boy" bomb on August 6, 1945, at 8.15am.

Faceless and eyeless, they were horrifically burned by the blast with their skins said to have been left blackened, cracked and scaly – just like an alligator.

And the ant-walking description comes from their behaviour as they blindly roamed the broken and corpse-filled streets of Hiroshima. Japan.

Witnesses claimed these hopeless and shambling wounded would end up following each other in lines as they desperately sought help – like a march of ants across a garden path.

The "ant walkers" were vividly described in Charles Pellegrino's book The Last Train from Hiroshima, extracts of which were published by The New York Times.

"The alligator people did not scream. Their mouths could not form the sounds. The noise they made was worse than screaming.

"They uttered a continuous murmur like locusts on a midsummer night.

One man, staggering on charred stumps of legs, was carrying a dead baby upside down

"One man, staggering on charred stumps of legs, was carrying a dead baby upside down."

The "ant walkers" were just one the horrors witnessed by the survivors who found themselves in a wasteland the likes of which has never been seen again.

Other survivors described the lumbering injured covered in burns as "walking ghosts" as two thirds of the city was reduced to rubble.

While other accounts said many of the wounded were left covered in crawling blankets of black flies as they were too weak to swat them away while the insects feasted and laid eggs in their raw flesh.

Hiroshima and Nagasaki – which was bombed three days later on August 9 – were the first and so far only time man has made wartime use of nuclear weapons.

It was a double blow which ended World War 2 – with some arguing the bomb saved more lives in the long term as it meant the US did not have to invade Japan as the Emperor surrendered just weeks later.

But others argue it was an example of pure barbarism as most of those who died were civilians. 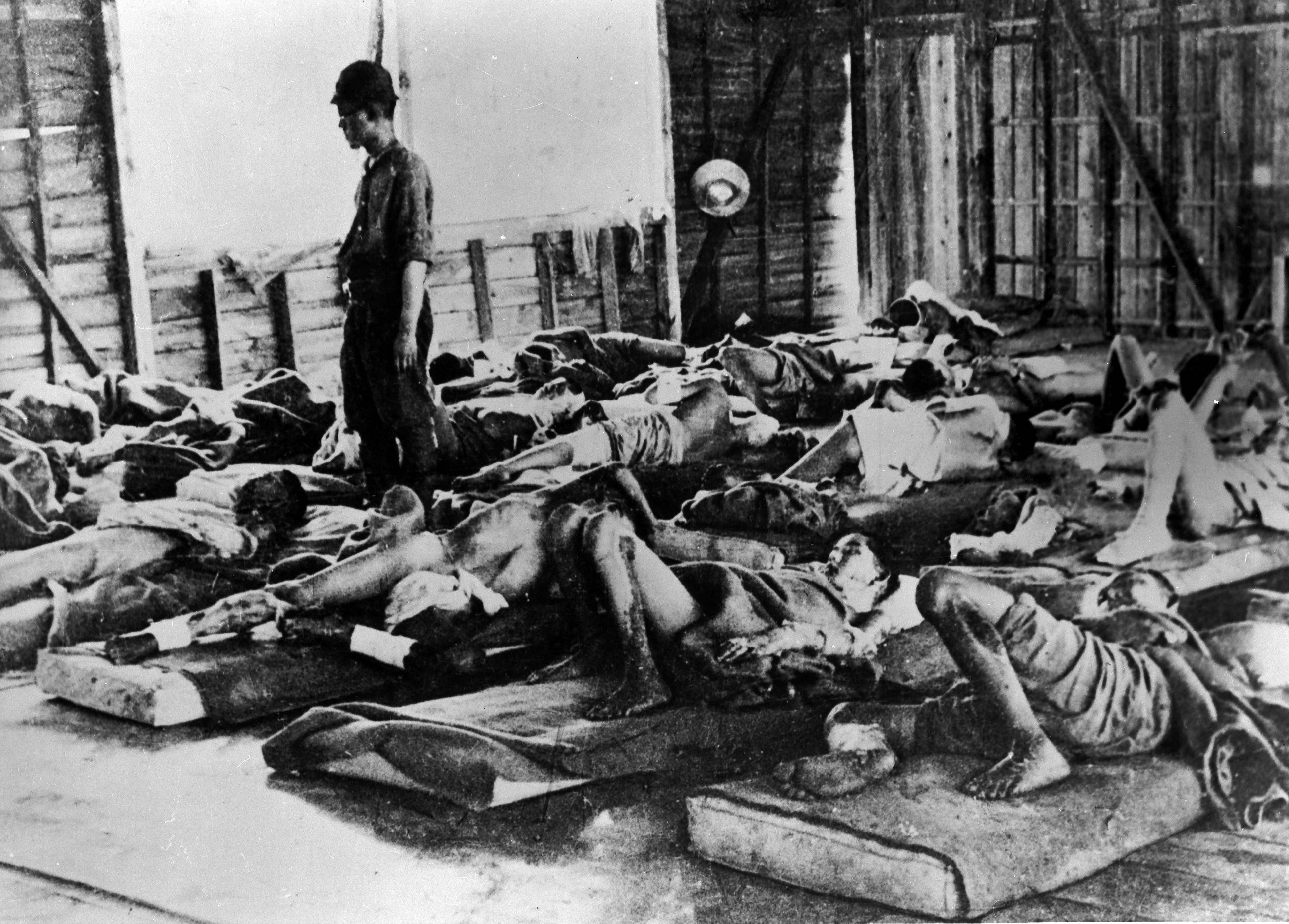 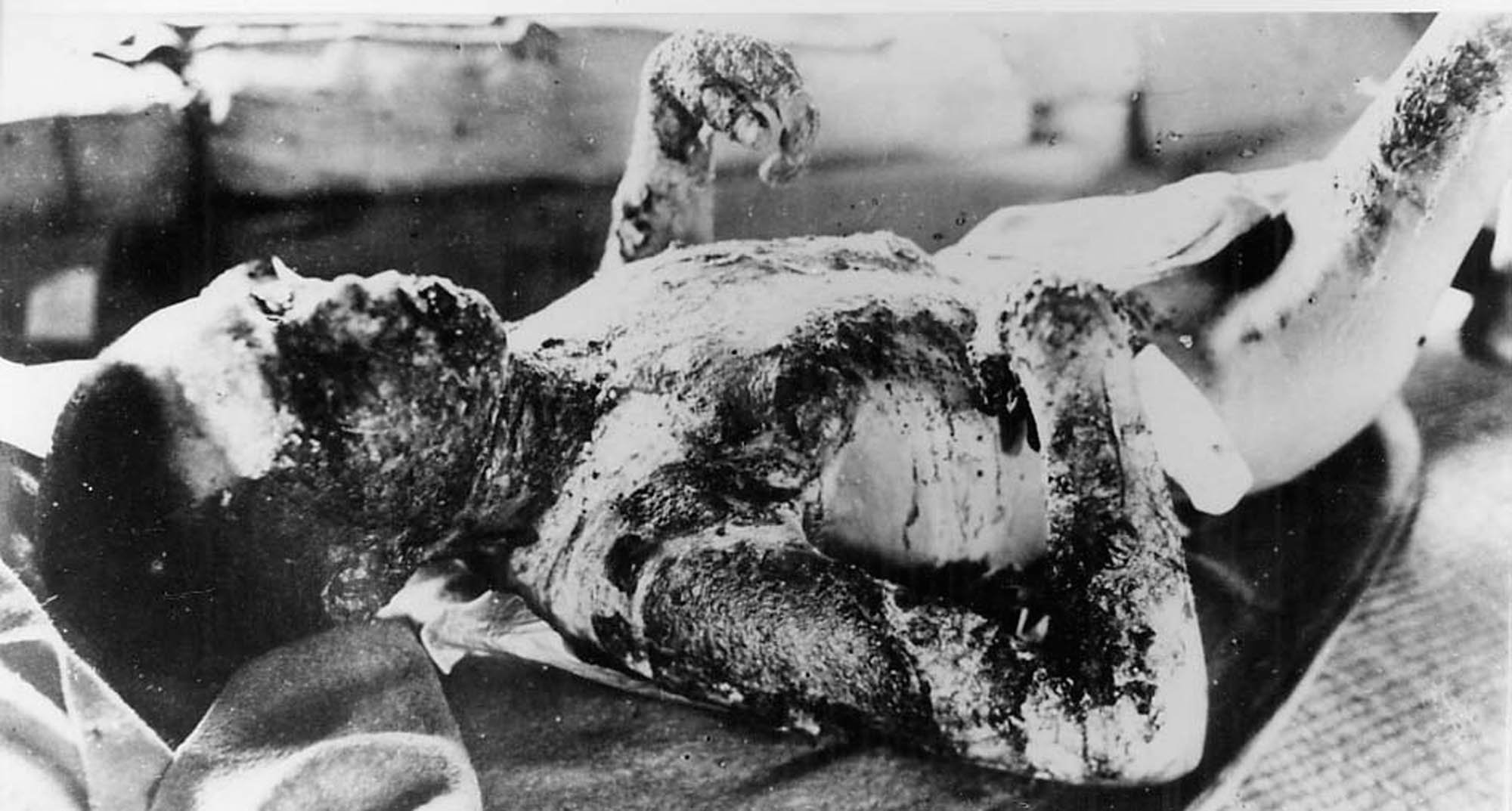 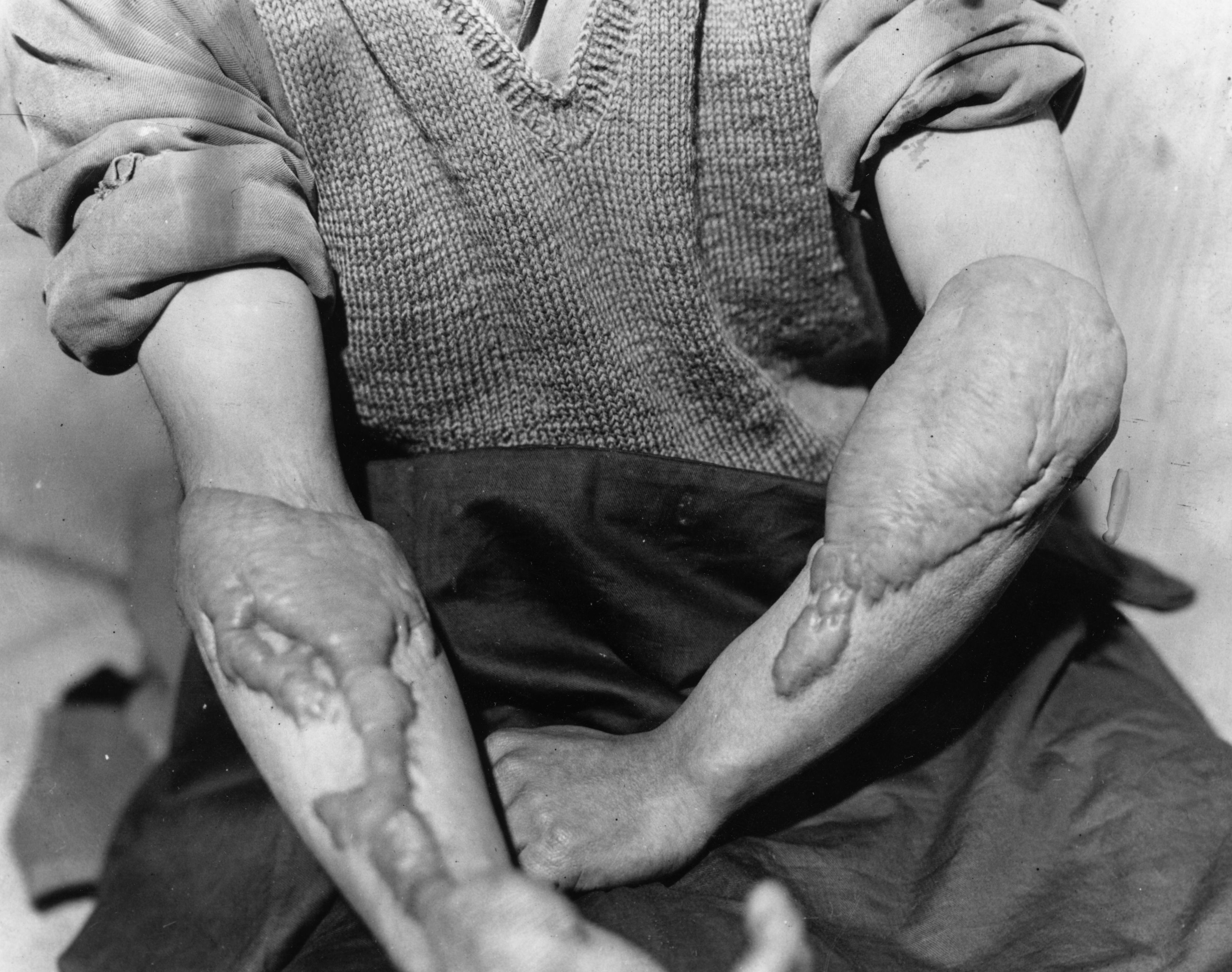 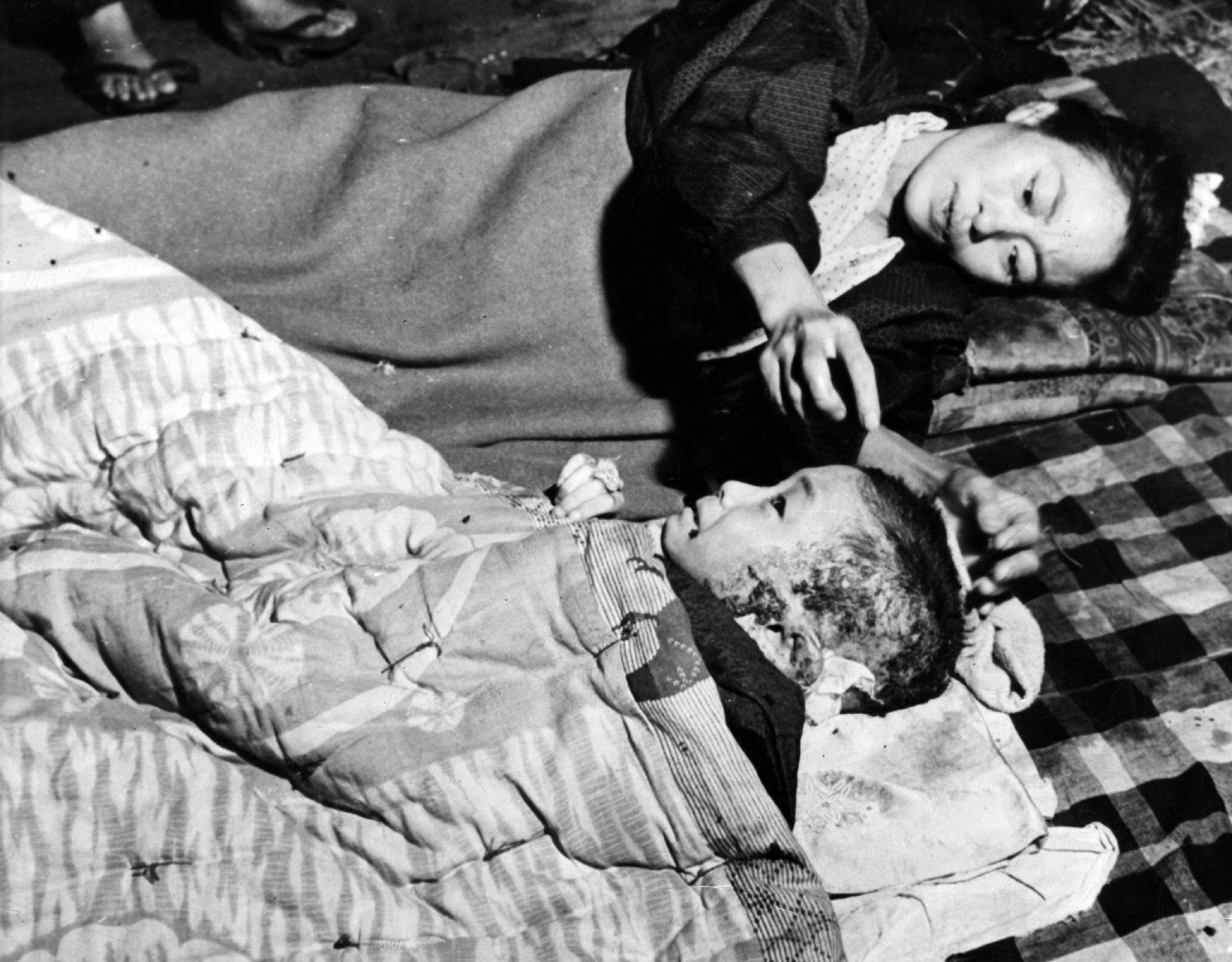 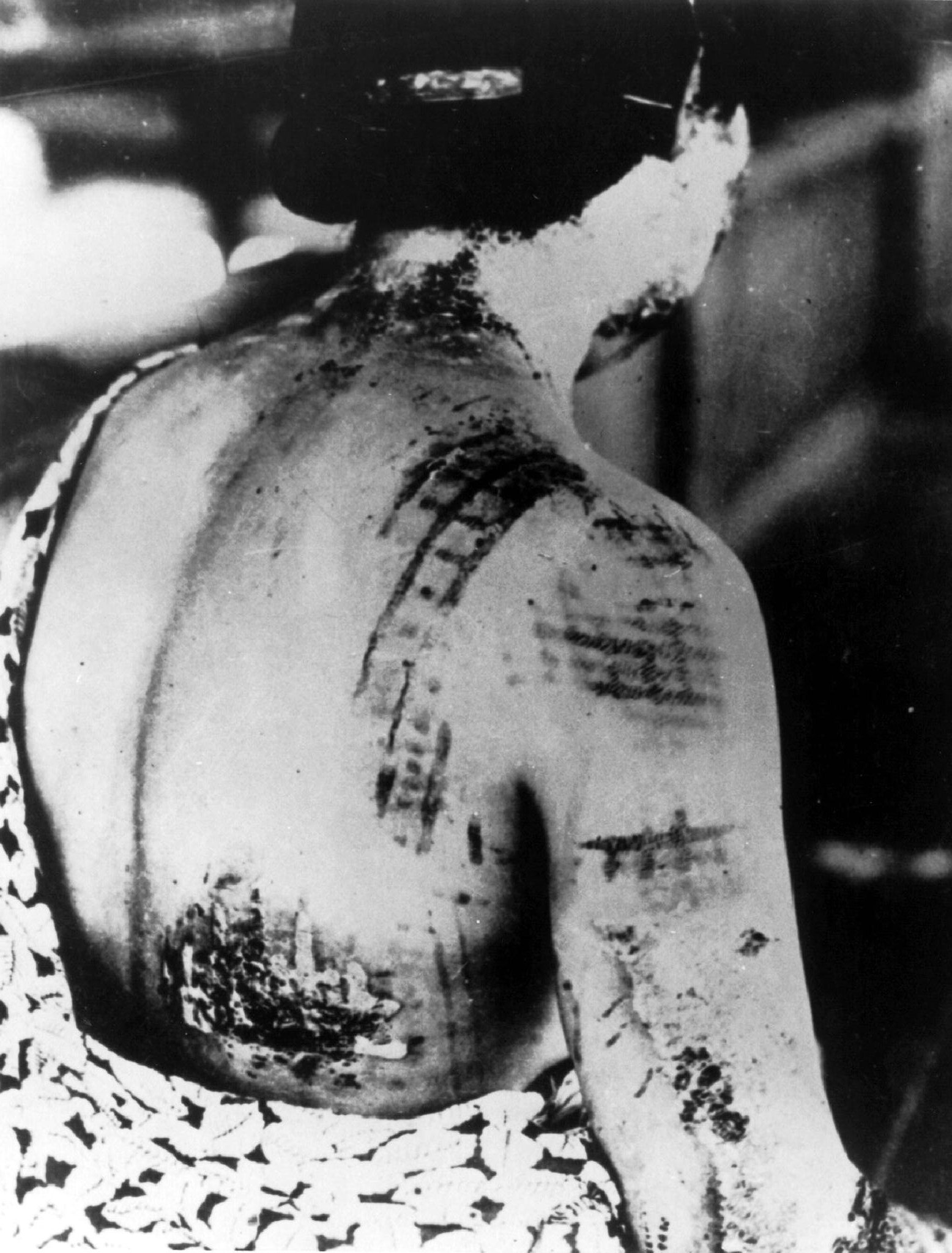 It is estimated some 165 people were "double survivors" – those who managed to flee to ruins of Hiroshima to Nagasaki, only to them feel the burn of nuclear fire once again.

Randomness seems to have been the key in deciding who died and who survived the bombing – with those unfortunate enough to be outside turned to dust or horrifically burned, while people lucky enough to be inside lived to see the aftermath.

Pellegrino wrote the account of one doctor who said survivors were so traumatised by the events they ignored even those crying for help and "shrieking" from the flames.

"Those of us who stayed where we were, those of us who took refuge in the hills behind the hospital when the fires began to spread and close in, happened to escape alive" he said.

"In short, those who survived the bomb were, if not merely lucky, in a greater or lesser degree selfish, self-centred – guided by instinct and not by civilisation."

The survivors called the A-bomb the "pika-don", or flash-bang, as if you saw the flash – the "pika" – you had just seconds to run for cover before the bang – the "don". 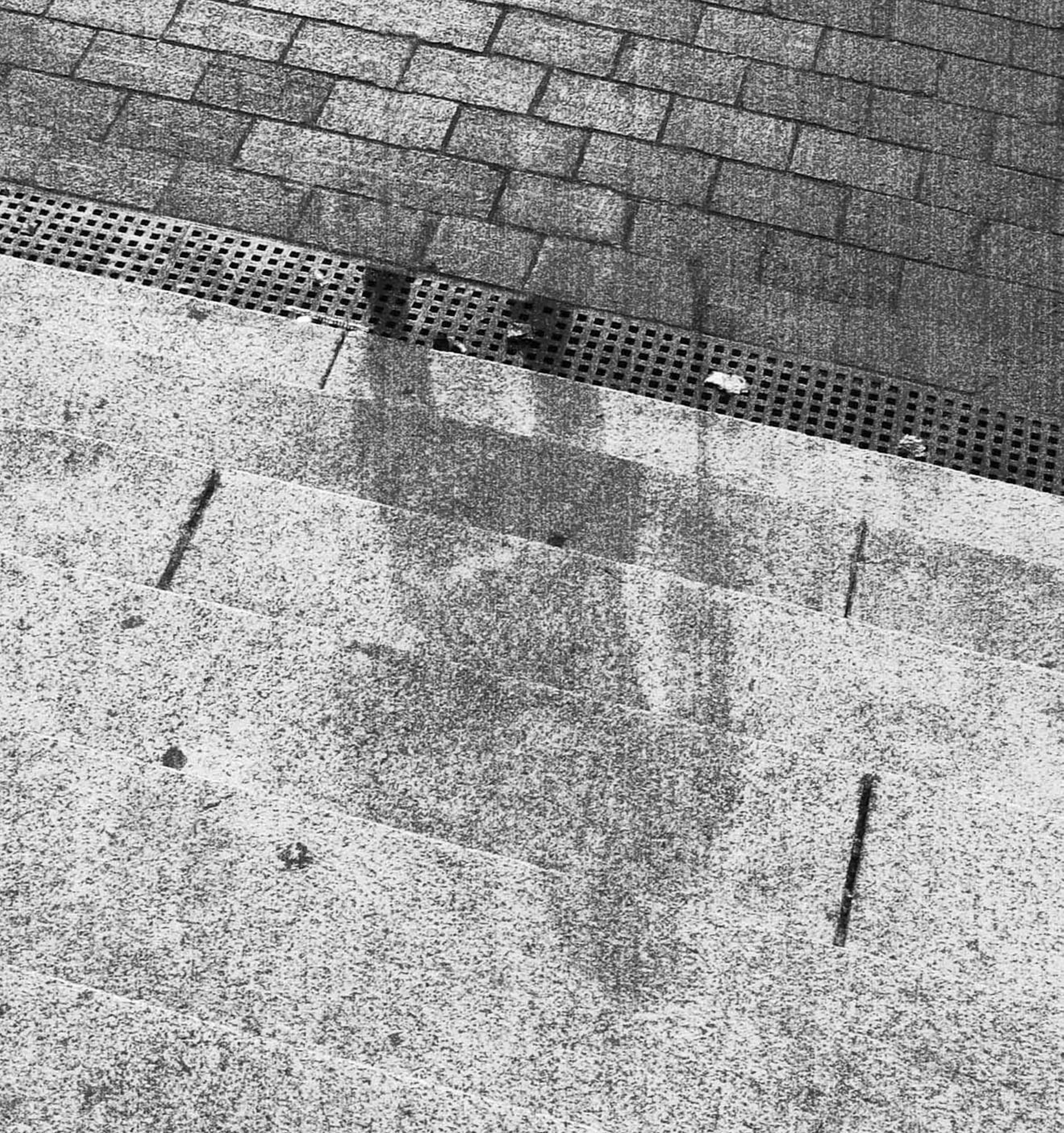 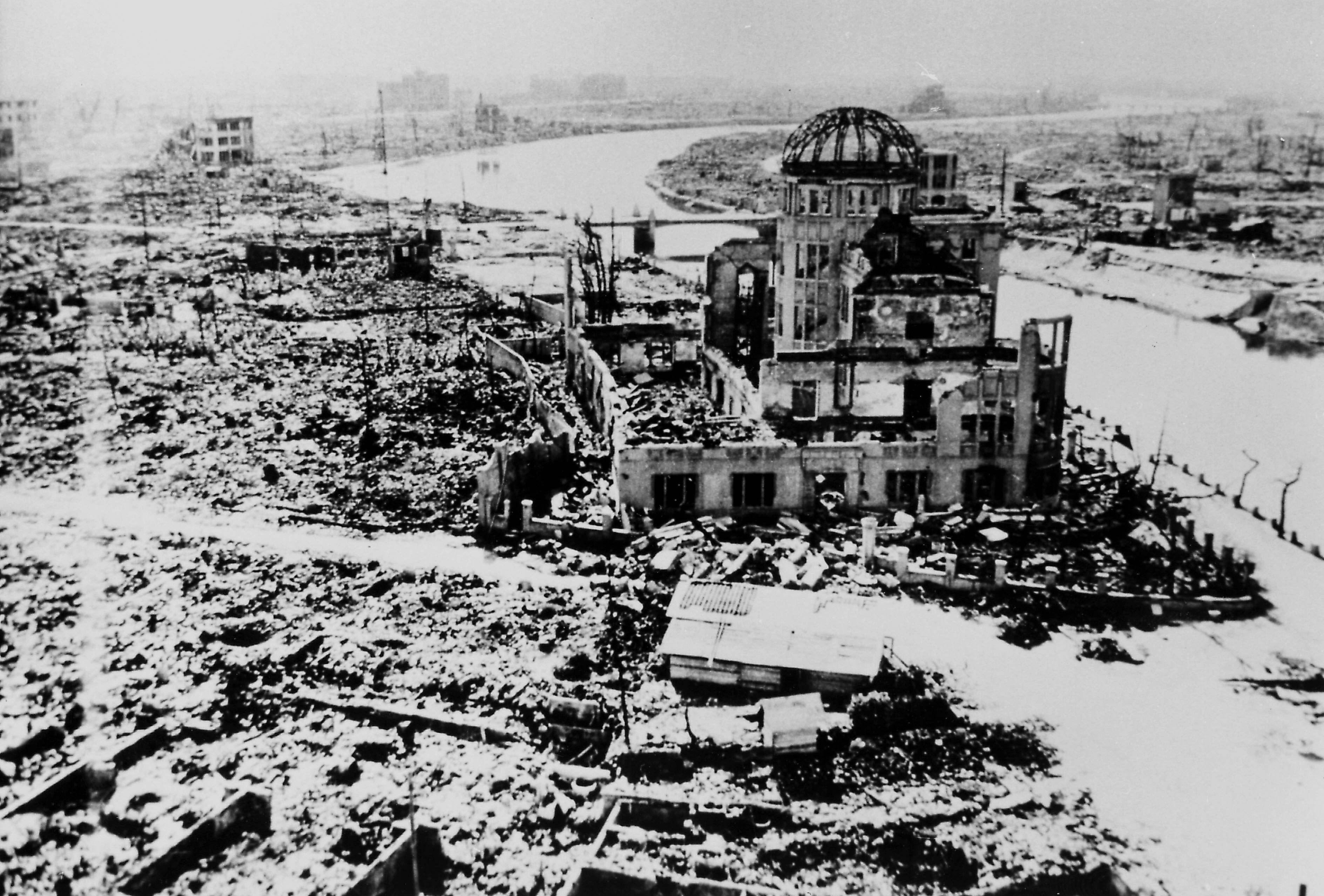 Pictures show survivors who were wearing patterned dark clothing saw the stripes or flowers burned onto their skin, and wristwatches branded their flesh.

And people's shadows were blasted onto the pavements – a chilling picture of what they were doing a moment before the explosion.

Dr Michihiko Hachiya's diary also reveals the the aftermath of the bombing as he lived just one mile from ground zero.

He said he recalled the flash and the pain as he was left with shards of wood and glass embedded in his body – and that was only where the horror began.

He ventured into the street and saw all the small houses were completely gone – and then he saw naked people, their clothes blasted off by the shockwave.

"Complete silence" fell over the streets as he started to walk – finding trams stopped in the road which were full of bodies "blackened beyond recognition".

"There were the shadowy forms of people, some of whom looked like walking ghosts," he said.

"Others moved as though in pain, like scarecrows, their arms held out from their bodied with forearms and hands dangling.

"These people puzzled me until I suddenly realised that they had been burned and they were holding their arms out to prevent the painful friction of raw surfaces rubbing together." 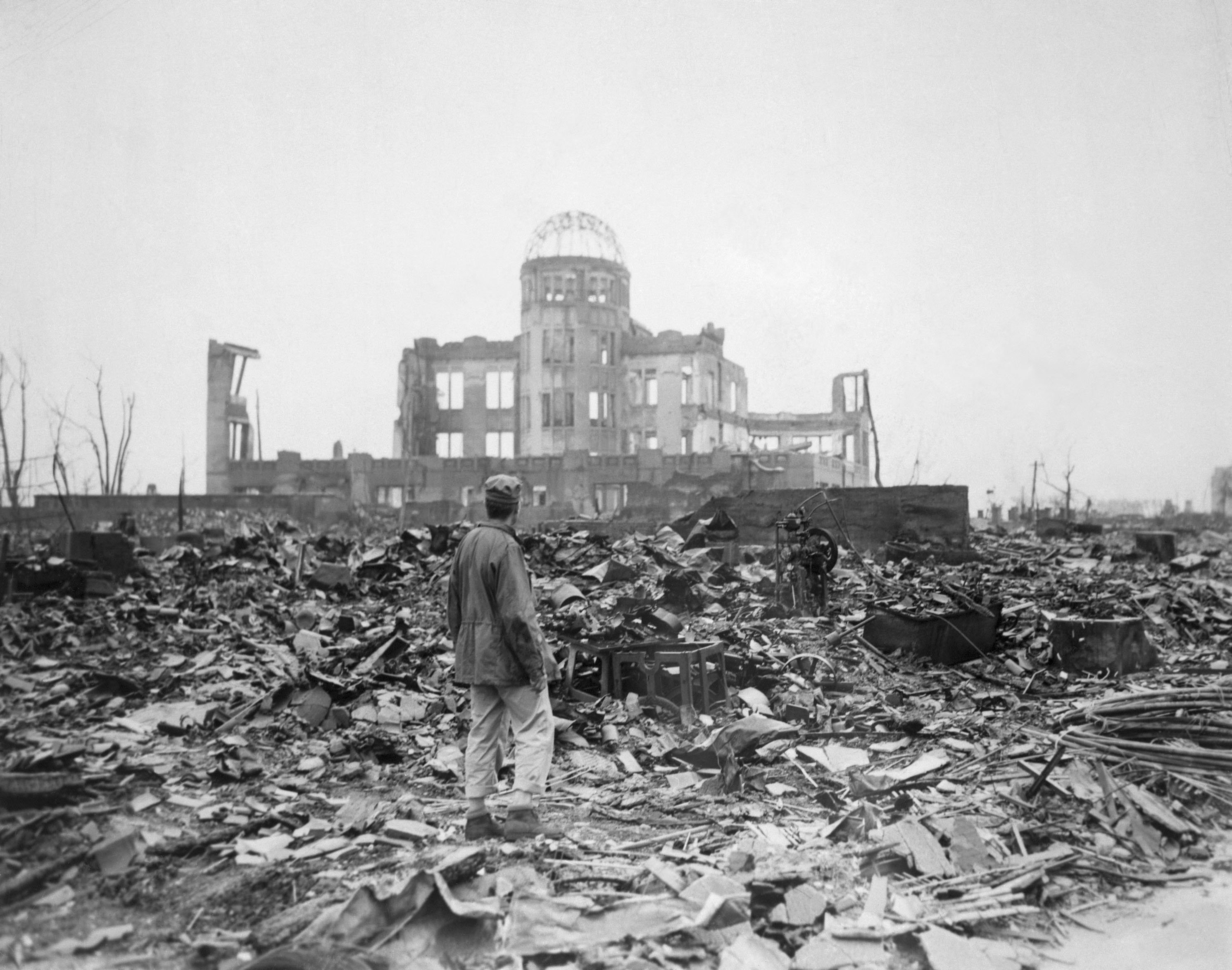 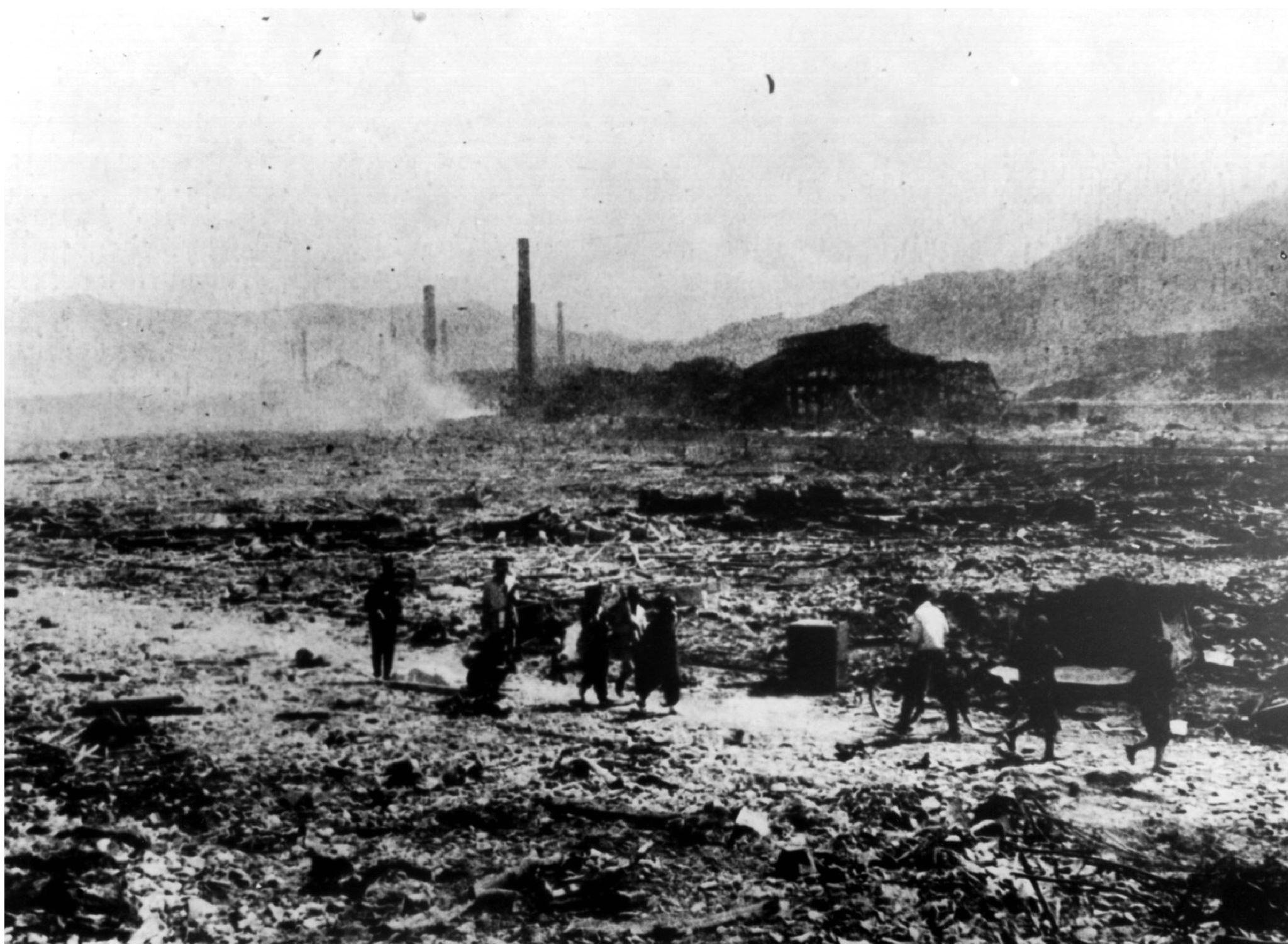 And further stories of the harrowing aftermath of the bombings were told to TIME, with the blinding light being one of the memories burn into their brains.

Survivors told of people screaming "water, water" to both soothe their burns and ease the dehydration caused by the sickness.

"The injured were so weak that they couldn't brush away the flies that nestled in their hands and necks. Some were black from a blanket of flies that covered them."

Fujio Torikoshi was eating breakfast and due to head to a hospital appointment when they heard the unrecognisable sound of a B-29.

He described seeing a "black dot" in the sky which then suddenly burst in a blinding ball of light – which then blew him off his feet in a gust of burning hot wind that scalded his arms and face.

Taeko Terame described the city as becoming a "sea of fire" as she escaped from the wreckage of her workplace at the city's telephone bureau – hearing voices crying out for help.

"I began to choke on the consequent smoke— poisonous gas, it seemed like—and vomited uncontrollably," she said. 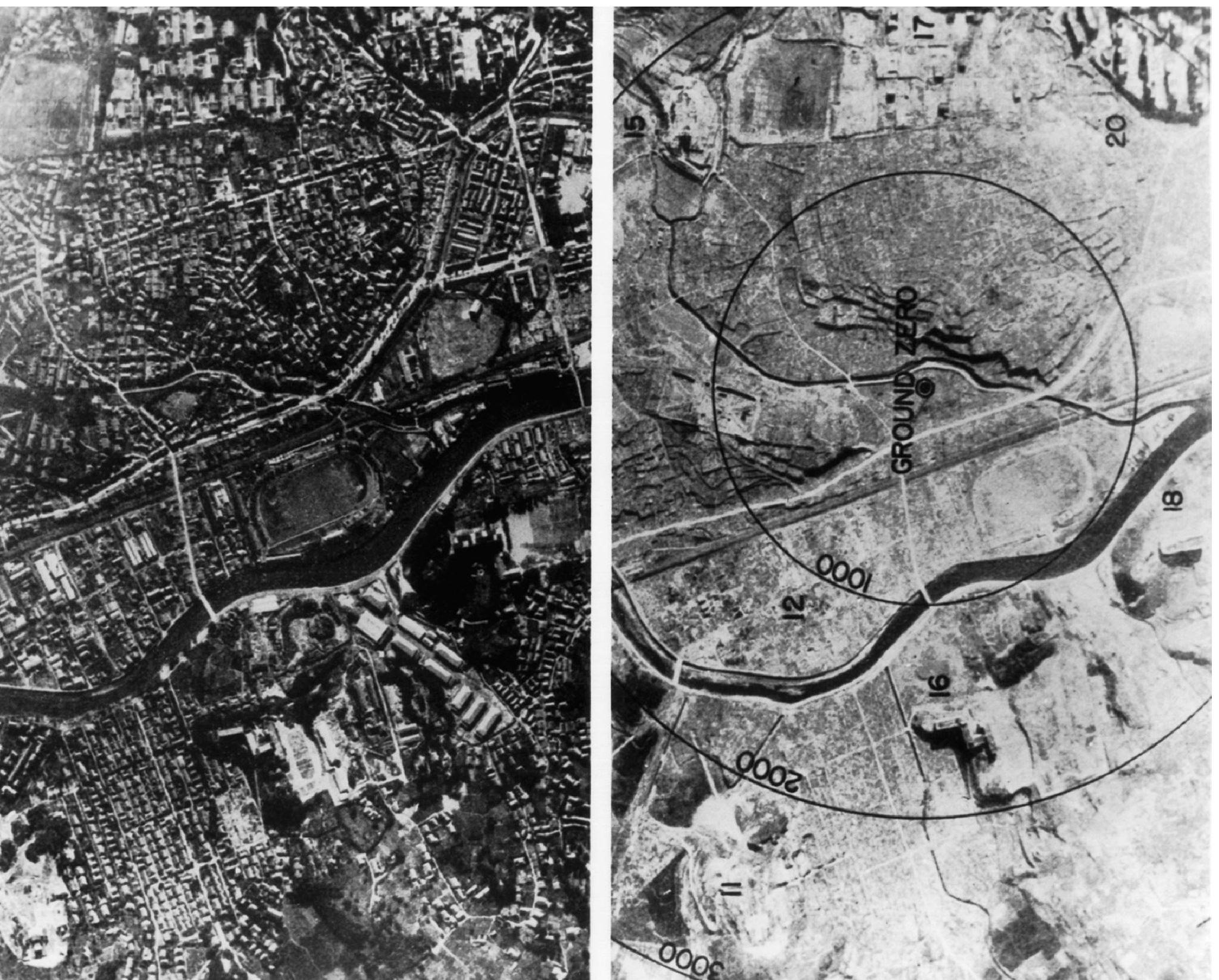 Yasujiro Tanaka was three when the bomb went off over Nagasaki – and even now he remembers the "pika", which he describes as a "million camera flashes going off at once".

He was left buried in the wreckage of his home – with his injuries leaving him with radiation burns, deaf in one ear and with a misshapen face.

His mother meanwhile would see glass shards grow out of her skin for years to come as long-embedded shards were finally pushed out, while his sister suffers chronic pain.

Masakatsu Obata also survived the bombing Nagasaki and he revealed seeing a cooworker whose skin was "melted off" and whose body & face were swolen to "one and a half times the size".

He said: "I started to look forward to the baked potato that I had brought for lunch that day, when suddenly, I was surrounded by a blinding light."

Survivors, relatives and a handful of foreign dignitaries gathered today for a ceremony in Hiroshima to pray for those killed or wounded in the bombing and call for world peace.

Participants, many dressed in black and wearing face masks, offered a silent prayer at 8.15am – 12.15am GMT.

Hiroshima's mayor called for leaders to visit the cities, and warned "experience has taught humanity that threatening others for self-defence benefits no one".

Prime Minister Yoshihide Suga also delivered a speech in the city, but was later forced to apologise for skipping part of the text – reportedly on Japan's support of international nuclear disarmament – apparently by accident.