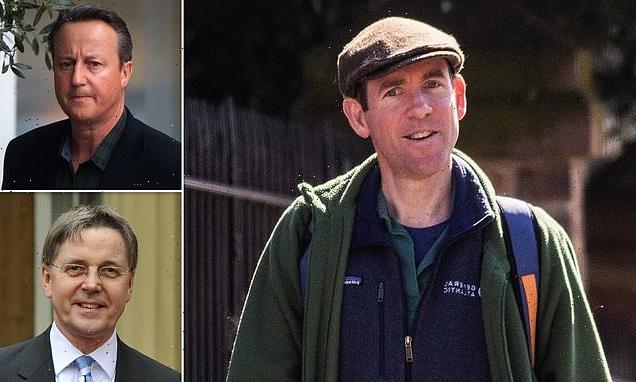 Handed a job by a friend giving him ‘extraordinarily privileged’ access to the Government and then allowed to use it to build a private firm: Probe into Lex Greensill lobbying scandal highlights errors – and criticises ex-PM David Cameron

The long-awaited report about Greensill Capital, the collapsed financial company that the former prime minister lobbied ministers for, was published today on the last day of the Parliamentary term.

The report, totalling 141 pages, says: ‘It is clear from the evidence that I have reviewed that Mr Greensill had a privileged – and sometimes extraordinarily privileged – relationship with government.’

Mr Boardman concludes that Mr Cameron, the former Conservative Party leader, ‘did not breach the current lobbying rules and his actions were not unlawful’.

But the report added that ‘Mr Cameron could have been clearer about his relationship with Greensill Capital’ in his communications with the Treasury, the Bank of England and officials.

Mr Cameron told Mr Boardman that Greensill Capital was paying him ‘a good amount of money every year’ and he had equity and participated in a discretionary uncapped bonus scheme.

Earlier this month it was revealed Mr Cameron was paid more than £720,000 for 25 days work a year for Greensill Capital, meaning he was on around £28,800 a day. 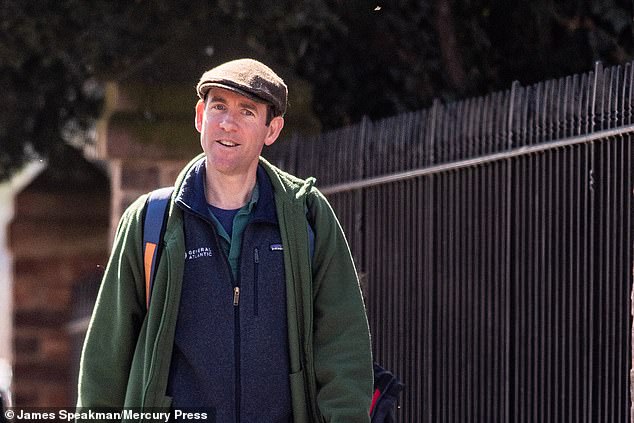 The report, totalling 141 pages, says: ‘It is clear from the evidence that I have reviewed that Mr Greensill had a privileged – and sometimes extraordinarily privileged – relationship with government.’ 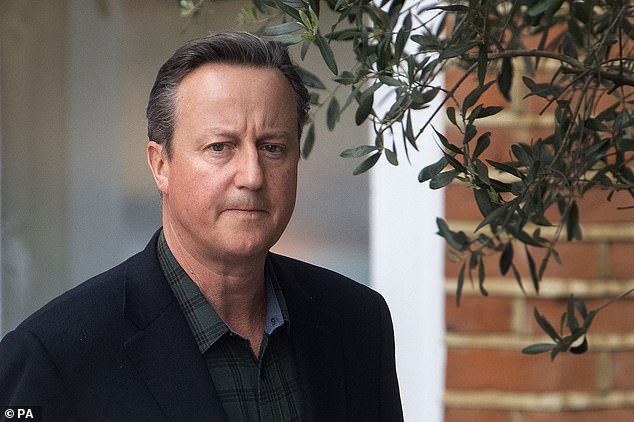 The long-awaited report about Greensill Capital, the collapsed financial company that the former prime minister lobbied ministers for, was published on Thursday. 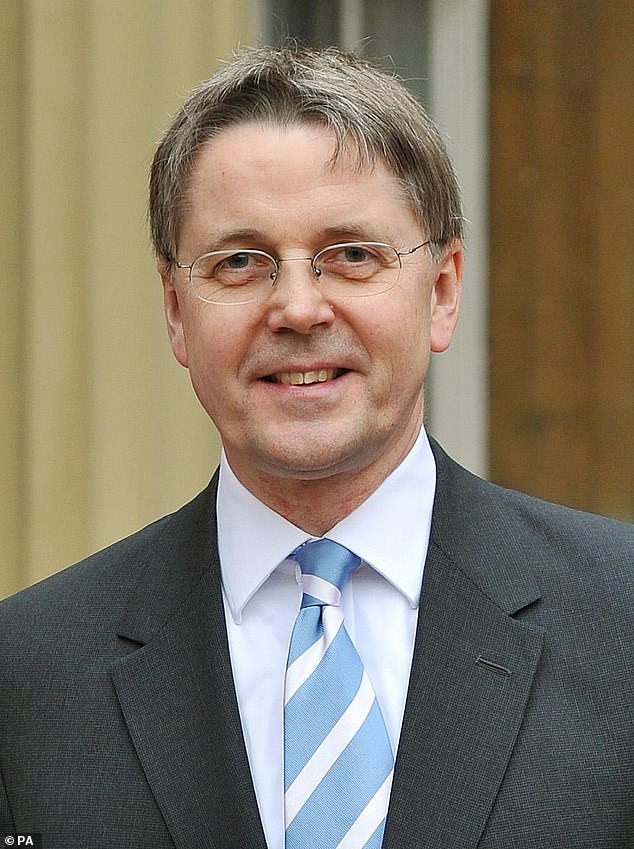 The report criticised Mr Greensill’s appointment by former City bank colleague Jeremy (later Lord) Heywood but admitted that because he died in 2018 he was unable to defend himself tot he inquiry.

David Cameron was accused of over-egging Matt Hancock’s support for Greensill’s finance products after ambushing the then health secretary.

Mr Hancock went for what he believed was meant to be a private drink with the former prime minister in October 19.

He discovered Lex Greensill and Bill Crothers, a former civil servant who left to work for the financier, were also there to lobby him over technology that adapted its supply-chain finance system to allow NHS staff to access their pay in real time, instead of waiting until the end of the month.

Mr Hancock told Mr Boardman he was unaware that they would be there and told them it was not something he had power to do, He advised them to contact individual NHS trusts.

He also told his office the next day about the meeting and ‘specifically told them there should be no change of policy’.

But that same day Mr Cameron’s office emailed Mr Hancock’s team saying the minister had ‘agreed’ that NHS staff could access its technology for real-time access to their pay under a deal in which it would be ‘free and forever’.

It also said he had been ‘very taken by the offerings and the good they could do for the NHS’.

In his review, Mr Boardman said: ‘This email is consistent with other instances in which Greensill Capital and its associates have appeared to use a strategy of implying a more enthusiastic reception to their proposals than they had actually received.’

He also cited a subsequent email from Department of Health officials who agreed they would need to warn the NHS of what Hancock had said, ‘to avoid Greensill Capital exaggerating what they had agreed with the Secretary of State’.

They added: ‘From past experience that is precisely the sort of thing Greensill are likely to do!’

Mr Boardman said that the low take-up of Greensill Capitals products showed that ‘ministers and civil servants made the proper analysis of the products being offered to them and did not allow their judgment to be influenced’.

But he said: ‘Those lobbying government on behalf of Greensill Capital at times used strong methods.

‘For instance, Bill Crothers had to apologise to officials in MoJ for being too forceful in his attempts to sell Greensill Capital’s products and he mis-stated the events around his departure from the Civil Service.

‘David Cameron, when seeking to influence Her Majesty’s Treasury (HMT)’s decisions about the CCFF (Covid Corporate Financing Facility), on occasion understated the nature of his relationship with Greensill Capital.’

Mr Greensill’s firm was involved in supply-chain finance, which ensures that suppliers get paid more rapidly by their customers than normal.

Greensill would pay suppliers directly, and then collect the money later from the customer. It made its money by charging a fee that offset the risk of the customer going bust before it could pay.

It wanted to introduce the technology for NHS staff instead of them using payday loans and attempted to woo key ministers and officials.

It emerged earlier this year that Mr Greensill was handed a job as a Crown Representative in 2014, even boasting his own No10 business cards and email address, while running the firm.

It collapsed earlier this year and its relationship to Mr Cameron, who lobbied senior serving ministers for the firm, has been thrown into the limelight.

Sir Jeremy, later Lord Heywood, was Cabinet Secretary and head of the Civil Service under Mr Cameron and Theresa May, before passing away in 2018 at the age of 56.

Mr Boardman said Mr Greensill’s first three-month stint appointment was ‘properly made’ but ‘potential conflicts of interest should have been considered more fully in the process, in particular in reference to his pre-appointment activities and consequent proximity to Citibank’.

He also warned: ‘This area of public appointments is opaque and ill-defined. The process should be more clearly delineated and requires greater transparency to maintain public confidence.’

His report details evidence that former Cabinet Secretary Lord Heywood had called the suggested referral of Mr Greensill’s appointment to an ‘approvals board’ as ‘bureaucracy gone mad’.

The pair had previously worked together at Morgan Stanley, the US investment bank.

Mr Boardman said: ‘I have been unable to find the minutes of the approvals board which could have determined whether ministerial approval was sought or obtained for his reappointment.’

He said: ‘During this period, Mr Greensill was provided with two sets of official IT and security access for the Cabinet Office and, with Lord Heywood’s support, Number 10 Downing Street, initially, although there is no evidence that Lord Heywood was aware of this, in advance of the completion of the usual security vetting process.’

Mr Boardman said that his letter of appointment also included a provision, drafted by Mr Greensill, which ‘created ambiguity about the potential for conflicts of interest’.

Mr Greensill’s role in the Government gave him a ‘marketing platform’ for Greensill Capital’s business with the public sector, Mr Boardman said.

‘This enabled Mr Greensill to promote a product which did not, in fact, provide material benefits to government (except possibly in relation to the pharmacy supply chain finance programme, although even here the benefits are disputed),’ Mr Boardman said.

He said Lord Heywood should have realised Mr Greensill was ‘building a supply chain business in the UK and should have considered the issue of conflicts of interest’ when Mr Greensill cleared through Lord Haywood the taking on of Vodafone as a Greensill Capital customer.

‘It is unclear why Mr Greensill was permitted to remain an adviser to government on supply chain finance under these circumstances,’ Mr Boardman said.