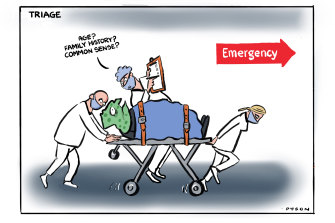 Greens must choose between ‘moderate’ and ‘inadequate’
Your article “Greens slam Labor’s climate bill as ‘weak’ symbolism” (The Age, 15/7) clearly sets out the dilemma facing the Greens. Be true to their platform they took to the last election or take a “better than nothing” approach to Labor’s 2030 emission targets.

I’m reminded of the republic referendum in 1999, when advocates of a republic split over whether a president would be appointed by parliament or elected by the people.

Consequently, the referendum voted no and republicans were left with no prospect of a republic becoming a reality in Australia.

Adam Bandt must be careful not to foil Labor’s attempt to legislate moderate emissions targets only to be left with the inadequate targets of the previous government. Many believe we should put the 43 per cent target in the bank then work towards exceeding this target.
Graeme Lechte, Brunswick West

Surely it always knew that the reduction goal it took to the election was well short of what the experts in this field say is necessary if we are to avoid climate catastrophe. And while we can understand that it didn’t want to appear to renege on an election commitment, surely the current clamour from almost every Pacific country for a more Greens-like target presents the perfect “honourable” reason for getting more into line with what the electorate both wants and needs.
Nick Jans, Princes Hill

The Greens still have their training wheels on
It seems the Greens, with new-found power, but still on training wheels, may again wreck a Labor government’s prospects of making real progress on climate action. They did just that with Kevin Rudd’s emissions trading scheme in 2009, and took us to a decade of climate inaction. The Greens accuse Labor of adopting a “my way or the highway” attitude when they are doing exactly that themselves. They must learn to negotiate and make acceptable compromises.

The Greens have also ignored assurances from diverse sources, including the Prime Minister and independent senator David Pocock, that the 43 per cent emissions reduction target is “a floor, not a ceiling” and further adjustments are expected.

They are right to make a fuss
How can Labor claim to be “phasing out” coal and gas, while at te same time reserving the right to approve more fossil fuel projects? Its proposed legislation has more holes and cop-outs than a lump of Swiss cheese.

Science tells us the weak and unenforceable 43 per cent reduction in emissions is inadequate to keep global heating to 1.5 degrees. Our prime minister has deceived and betrayed our Pacific neighbours as well as the Australian people. When we voted, we understood that strange target was the solid minimum that was being guaranteed, with the implication that the reality would be far more ambitious.

We have moved out of the frying pan into the fire. The Greens are right to make a fuss.
Peter Barry, Marysville

How about a COVID tax?
Since the government has no problem about levying a tax on cigarettes to pay for the health problems associated with smoking, why cannot it be done for COVID, which is certainly costing Australia financially in health terms?

Those who wish to attend gatherings, football matches for example, are contributing to the COVID numbers. Let there be a levy attached to the ticket price on this sort of thing. It would help defray the costs associated with the inevitable surge in cases and might even persuade some people not to attend these sort of events.
The governments of the land have to stand up and take action, this is an emergency, but none is prepared to act.

The vulnerability of elected government to pressure from lobby groups and the whims of the electorate means control needs to remain in the hands of the trained health experts, not politicians trying to gain brownie points with their various constituencies.
Doris LeRoy, Altona

No moral compass
I get the impression politicians and business leaders have abandoned their responsibility to protect the community from harm, and that despite evidence that the majority of people are not wearing masks in public, personal responsibility is now the mantra.

That this is happening while the COVID infection and death rates are increasing and while COVID is causing major problems across the community is shameful.

As an older person, I am 85, I feel very vulnerable and angry that politics and business are being given priority over my wellbeing, the wellbeing of other older people and the community in general.

Our leaders seem to have lost any sense of a moral compass, as well as losing the notion that the response to COVID should not be just an individual one but a societal one.
Terry O’Brien, Geelong

Age of entitlement
I am with Liberal senator Andrew Bragg on judges’ pensions (“Senator slams judges’ pensions that cost taxpayers millions”, The Age, 14/7). During their term in office they earn enough to invest in super for a comfortable retirement. The defined benefit scheme should scrutinise not only judges’ privileges but also those of former PMs and, while at it, the no-longer-functioning generals, admirals and air marshals.

Uncomfortable truths
During a recent holiday in northern Italy, I could not help noticing how mask wearing was socially accepted in the same situations where it was recently recommended by the acting Victorian chief health officer. There were no overt mandates, but you would be politely reminded to wear one by those around you if you failed to comply.

Northern Italy was devastated by the first wave of COVID-19 in 2019, so many locals retain strong personal memories of its tragic consequences. By comparison, Australia emerged unscathed and few Australians have such memories to reinforce their sense of personal responsibility.

Judging by our behaviour on public transport, there is an urgent need to reinforce that sense of our mutual responsibility.

It is high time to remind the public of some uncomfortable truths they might prefer not to hear. So rather than hiding them from our eyes, maybe our Health Department should make a point of regularly advertising the vaccination status and ages of the deceased to a reluctant public, so as to remind us all that “learning to live with the virus” is not the same as pretending it no longer exists.
Mike Sanderson, Drouin

Communication matters
As a 65-year-old GP, I fully understand the health rationales for recommending masks, however, the recurrent comparisons to seat belts and bicycle helmets bother me.

Masks cover more than half the face, robbing us of facial expression and the extra information from watching someone’s mouth as they talk. They muffle the voice, adding to the struggles for the hard of hearing or those with poor English. Putting a Perspex screen between masked patient and receptionist multiplies these difficulties.

Bike helmets might impinge on hair styles; seat belts on, well, nothing much at all. But masks impinge on communication. And that does matter.
Nick Carr, St Kilda

Tax cuts rethink needed
Newly released figures show that many executives receive in salary and bonuses in the vicinity of 100 times the average wage. Australia is no longer a fair and equitable country.

Show your mettle, Anthony Albanese, and renege on your election promise by redesigning the proposed stage 3 tax cuts. Do not legislate tax cuts for people earning more than $200,000.

Consensus headache
The government is between a rock and a hard place with implementing COVID-19 restrictions.

The mandatory mask regulation that applies to people travelling on public transport is extensively violated, indicating that a large proportion of the public is unwilling to comply with this restriction. To achieve compliance would require policing, which would be seen as a draconian measure.

The complacency of the general public may be related to the perceived risks from the disease. Victoria has a population of about 6.74 million and 2.2 million cases of COVID have been reported. Given that about one-third of our population has already had COVID-19 and 99.8 per cent of them survived, not taking COVID precautions is a risk people may be willing to take, especially if they are young.

Although the 20-29 age group has the highest rate of infection, their death rate is thousands of times lower than in all people aged 60 and above.

These considerations and other factors like financial circumstances explain the lack of consensus in relation to COVID-19 restrictions and pose a headache to the government trying to control this pandemic in a democratic environment.
Leigh Ackland, Deepdene

We don’t live in an economy. We live in a business that’s run by poor business people, who have thrived for years in an unreal world of free money, suppressed wage levels and tax impunity, and who are now simply out of their depth.
Gary Sayer, Warrnambool

The sentencing issue
If the judges of Victoria’s Court of Appeal feel that they can best represent the views of the community with regard to sentencing, they are welcome to step down from the bench and stand for election (“‘Instruments of injustice’: court slams sentence law”, The Age, 15/7).

In the meantime, they need to accept that the “proper” sentencing principles are in fact found in the legislation passed by our parliament, not in their heads.
Gregory Hill, Brunswick

Finding a U3A home
Congratulations to Carolyn Webb for her eagle-eyed article “Plea for ‘a place to call home’” (The Age, 15/7). I am sympathetic to my fellow U3A teachers and students in the Melbourne CBD.

We at Deepdene enjoy the support of Boroondara Council and surrounding community organisations. This situation speaks volumes to Melbourne City Council’s blindness to the citizens of the “third age” and fails to acknowledge the contribution to society we all wish to continue.
Graham Norman, Ivanhoe East

Education key
The problem with mask mandates is they need to be enforced. Neither the police nor the courts, nor any other agency, wants to waste their valuable resources in a “herding cats” endeavour, when education could solve the problem.

No one suggested mandating condoms during the AIDS crisis, but we had a lot of heavy-hitting education campaigns that did the job.
John Laurie, Riddells Creek

Politics
“We don’t have the financial capacity to continue to fund these emergency payments forever,” said federal Health Minister Mark Butler on Thursday. He sounds like a member of the Coalition.
Michael Harrison, Blackburn

If pandemic leave payments are unaffordable, so too are the stage 3 tax cuts.
Annie Wilson, Inverloch

The pandemic
I trust all those folk prepared to accept future government payments while sick with COVID ensure they have followed all advice to prevent infection.
John Groom, Bentleigh

Leaving responsibility for doing the right thing up to individuals is like leaving the fox in charge of the henhouse. Marie Nash, Balwyn

Wouldn’t it be wonderful if the Victorian Liberal party worked together with our Labor government to produce a joint COVID plan instead of just being the opposition for the sake of it.
Geoff Selby, Moorooduc

I wouldn’t have minded so much if the man who sneezed “everywhere” at the self-serve checkout at the supermarket yesterday had been wearing a mask.
Margaret Callinan, Hawthorn

Furthermore
I wanted to read an objective argument, not a job interview transcript (“Why we must build Rail Loop”, Comment, 15/7).
David Cayzer, Clifton Hill

Finally
A pie and a bucket of chips cost roughly the same as a 50-year veteran’s membership of the MCC. Either the food prices are too high or the 50-year dues are too low.
Ian Anderson, Ascot Vale

Gay Alcorn sends an exclusive newsletter to subscribers each week. Sign up to receive her Note from the Editor.