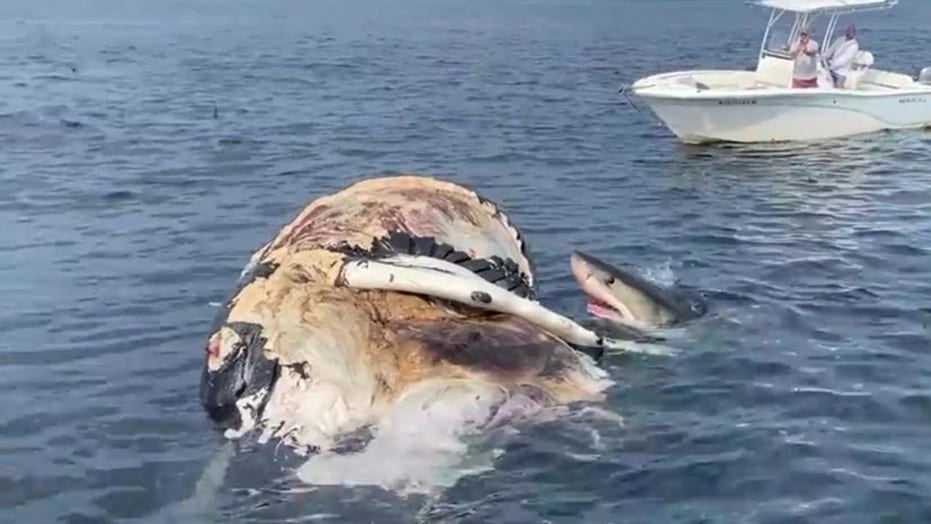 A group of researchers came across an unusual sight off the coast of Massachusetts. They witnessed a feeding frenzy as a group of sharks fed on a humpback whale. 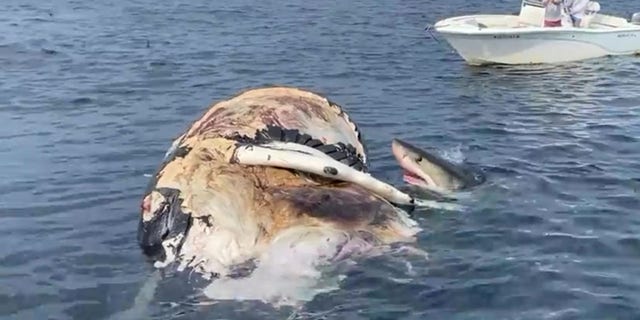 The researchers were a part of the Stellwagen Bank National Marine Sanctuary and were on a trip to tag basking sharks off the coast of East Boston.
(SWNS)

The researchers were a part of the Stellwagen Bank National Marine Sanctuary and were on a trip to tag basking sharks off the coast of East Boston, Southwest News Service reports. Instead, they found a group of Great White sharks feasting on the carcass of a humpback whale.

The researchers speculated that the whale had actually been killed by human interaction and the sharks had just found the body. The body was too badly damaged, however, and the exact cause of death could not be determined.

Based upon markings on the whale’s tail, the animal was identified as a one-year-old calf. It is believed to be one of the offspring of a tagged humpback whale named Venom.

The researchers took advantage of the situation and tagged five of the feasting sharks. The sharks are rarely seen close to the surface of the water.

The body eventually sank towards the ocean floor and the researchers believe that it will provide food for sharks in the area for some time to come.

The calf’s body wasn’t tagged before it sank, but the researchers are hoping to locate it. Studying the body may reveal important information about the local ecosystem.

The Stellwagen Bank National Marine Sanctuary is a federally protected area of water located near the mouth of Massachusetts Bay. It is a popular whale-watching site.