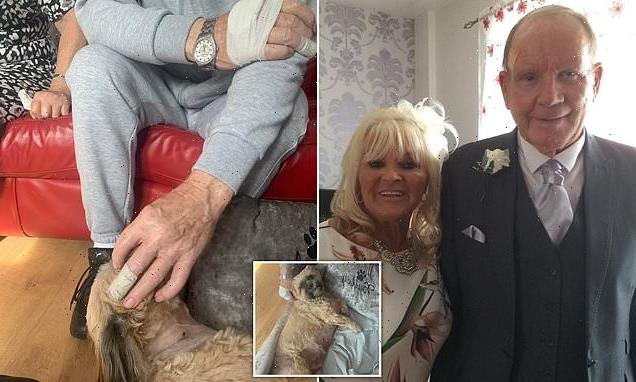 Grandfather, 80, is left covered with blood when Staffordshire bull terriers maul him and savage his pet dog in brutal attack

A grandfather was left covered with blood after Staffordshire bull terriers mauled him and his pet dog in a brutal attack.

Michael Campbell, 80, was walking his French bull tzu called Bo in Birkenhead Park, Wirral, on May 15 when he was attacked by three dogs.

Jan, a factory worker and originally from the Czech Republic, was left with a leg injury where you ‘could see his bone’ and was rushed to hospital.

Police seized two of the terriers, no arrests have been made and an investigation into the incident is ongoing.

Denise, Michael’s daughter, told The Mirror: ‘Dad let Bo off the lead and these Staffies came out of nowhere and started attacking his dog.

‘He went over to pick Bo up and fell over. They were jumping on him and trying to get past him to Bo, who he was protecting.

‘He had bites all over him and scratches on his face. Dad tried to protect Bo but couldn’t and had to move. The Staffies then started mauling Bo, ripping him apart in front of my dad.’ 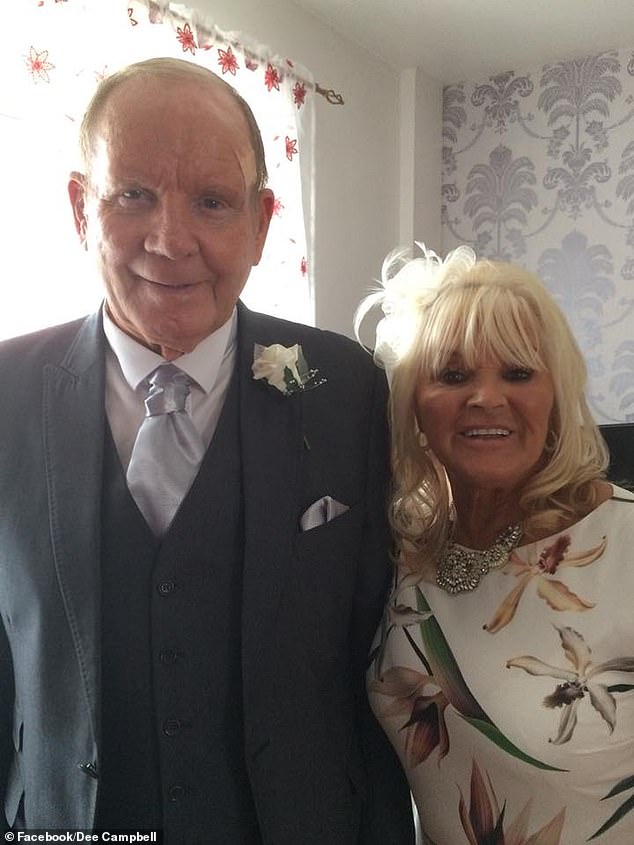 Michael Campbell (pictured with his partner Maureen), 80, was walking his French bull tzu called Bo in Birkenhead Park, Wirral, on May 15 when he was attacked by three dogs 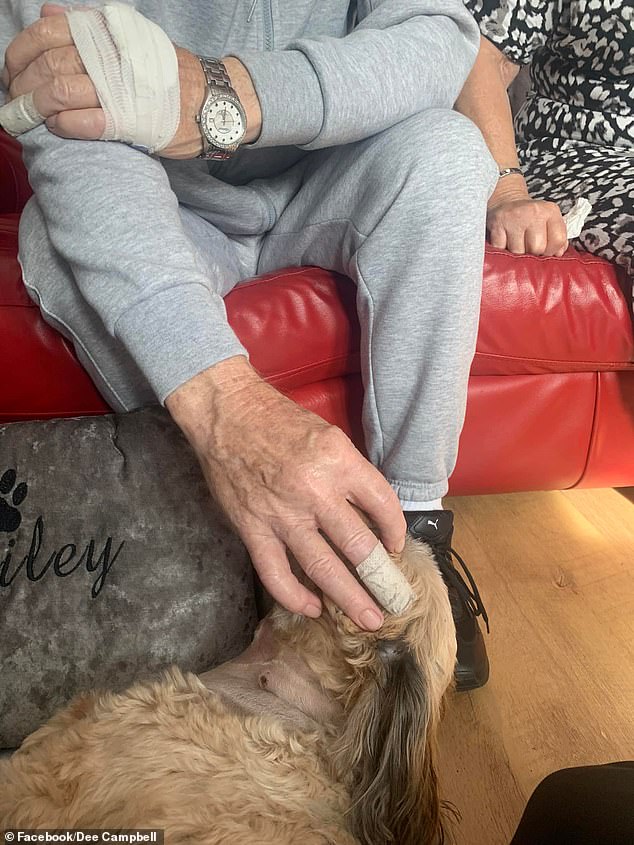 The Staffies ‘ripped apart’ six-year-old Bo before a passerby, Jan Majer, 33, tried to help Michael and Bo (Michael’s hands are still bandaged up)

Denise set up a GoFundMe, which to date has received more than £4,160, to pay for Bo’s ongoing vet bills and wrote: ‘My 80-year-old dad was out walking his dog Bo when they were both attacked by three dogs in Birkenhead Park.

‘My dad, who celebrated his 80th birthday the day before the attack, took his best mate for a walk on a nice Sunday afternoon and three Staffies attacked them.

‘My dad, who isn’t a well man, fell to the floor trying to shield his dog and was bitten by the dogs repeatedly.

‘The dogs managed to get my dad’s dog and started to maul him in front of my dad.

‘A man who was so heroic ran over and pulled my dad’s dog out of the mouths of the dogs and was attacked himself leaving him with awful injuries.

‘Bo has survived the first night but has suffered horrific injuries. The vets are doing all they can to help but don’t know if he will survive. 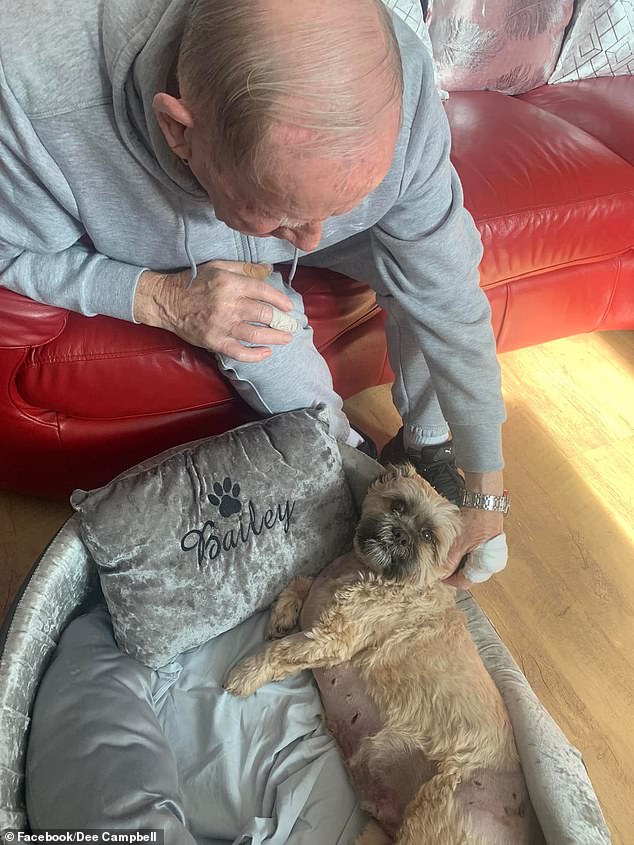 Denise, Michael’s daughter, set up a GoFundMe, which to date has received more than £4,160, to pay for Bo’s ongoing vet bills

‘The bill is already over £3000 and he has a long way to go. Why should my dad be left with this bill after this horrific ordeal as well as being left emotionally scarred?’

A spokesman for Merseyside Police said: ‘At around 11.50am we received a report that a man and his small dog were being attacked by two Staffordshire Bull Terriers in Birkenhead Park on Cavendish Road, Birkenhead.

‘A man who was driving by stopped to help the victim, an 80-year-old man.

‘The Good Samaritan, a 33-year-old man, lifted the small dog and as he did was bitten on his leg and arm by the two Staffordshire Bull Terriers. The 80-year-old victim received minor injuries.

‘Police attended the scene, both victims were taken to hospital for their injuries and are recovering from the incident.

‘The small dog was taken for veterinary treatment.

‘Officers have seized the two Staffordshire Bull Terriers and their two owners will attend for police interviews at a later date.’ 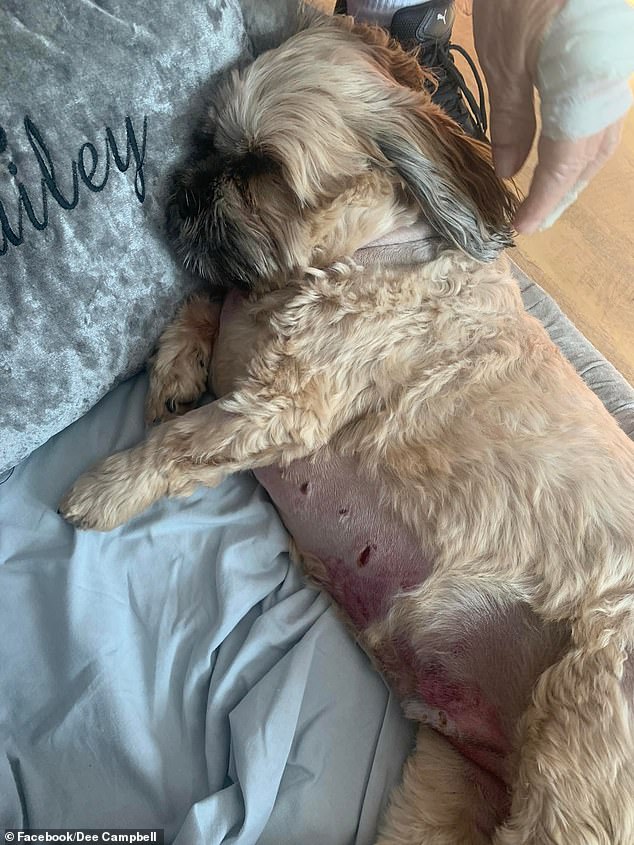 Police seized two of the terriers, no arrests have been made and an investigation into the incident is ongoing

Community Policing Inspector Peter Rexwinkel said: ‘This was a frightening incident for all involved and an investigation to establish the full circumstances surrounding the incident is continuing.

‘Although Staffordshire Bull Terriers are not a banned breed, they were reportedly out of control in a public place and as such officers have seized the dogs and the owners will be attending an interview.”

Inspector Rexwinkel added: ‘Merseyside Police takes such incidents seriously and have a dedicated Sergeant who reviews all cases concerning dogs.

‘Anyone walking their dog in our local parks need to be mindful of their dog’s behaviour at all times and keep their pet on a lead if it is liable to be aggressive towards other park users.

‘We will not tolerate irresponsible dog ownership on Merseyside and want to maintain all our parks as safe and welcoming places to be.’