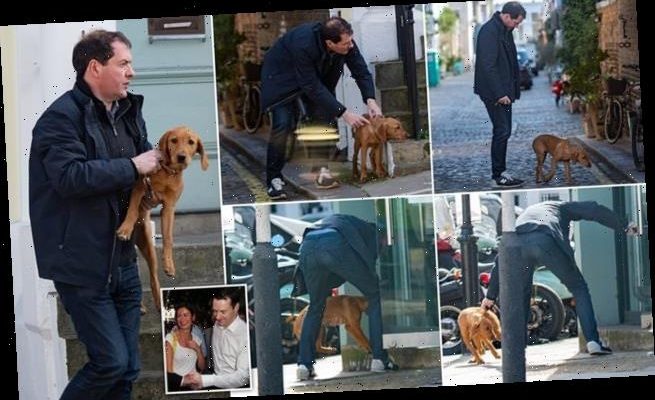 Puppies can be so taxing, George! Labrador is pictured giving ex-Chancellor, 49, the runaround – days after he announced his engagement to his pregnant former aide, 39

With an array of highly paid jobs since he was sacked as Chancellor – and a new fiancee – he should look like the cat who got the cream.

Instead George Osborne had a rather hangdog expression as he was given the runaround by his new puppy.

Mr Osborne made hard work of taking the mischievous fox-red labrador to the groomers to have its nails clipped. 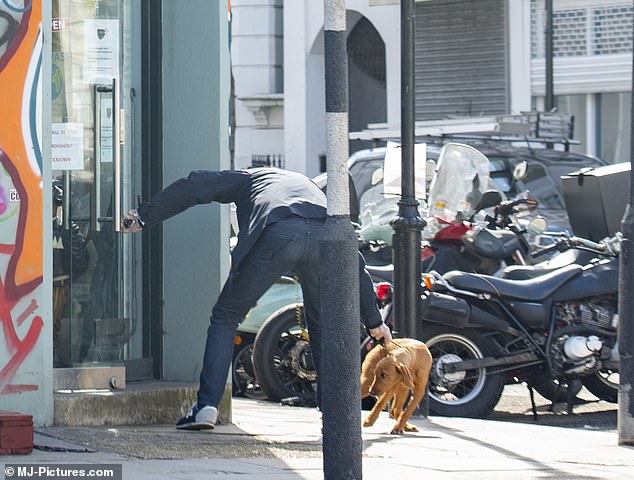 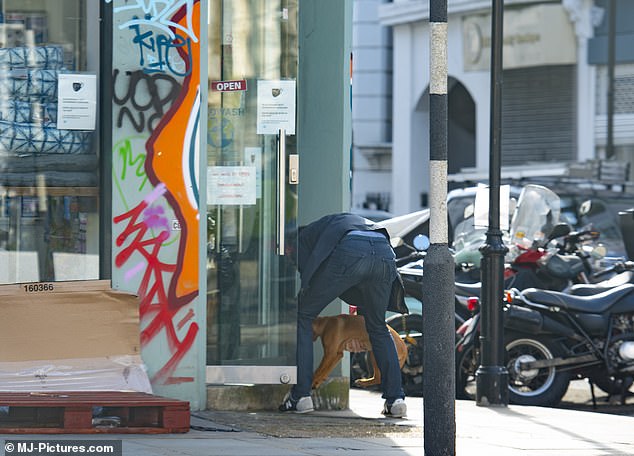 An onlooker said: ‘George was in an alleyway trying to get the lead on. But the pup circled round him.

‘He crossed the road carrying it and as he got to the door of the shop he put the dog down and it tried to leg it again.’

Mr Osborne managed to bundle the pup inside The Mutz Nutz in Notting Hill, west London, and returned to pick it up after a £15 nail trim. He is also believed to have bought some doggie treats.

On Wednesday, Mr Osborne, 49, and his former Treasury adviser Thea Rogers, 39, announced their engagement in the pages of The Times. They are expecting their first child in the summer. Mr Osborne has two children from his 21-year marriage to Frances Howell – they divorced in 2019. 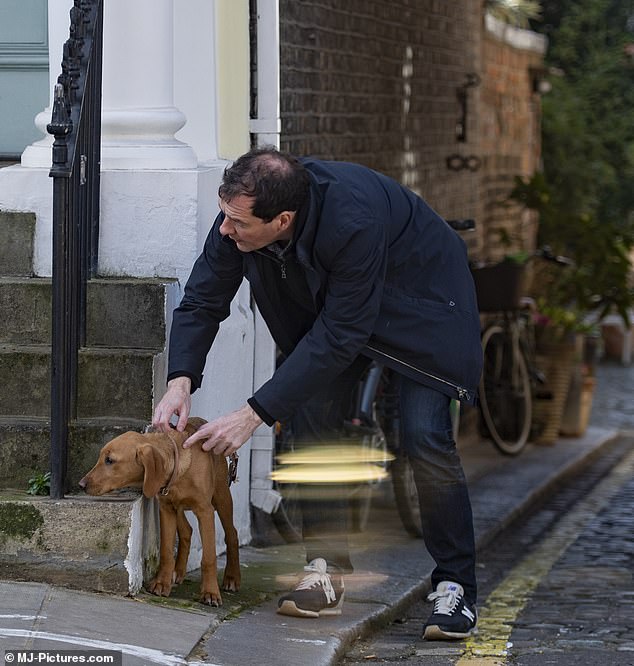 Mr Osborne, pictured had difficulty with his puppy in an alleyway in Notting Hill 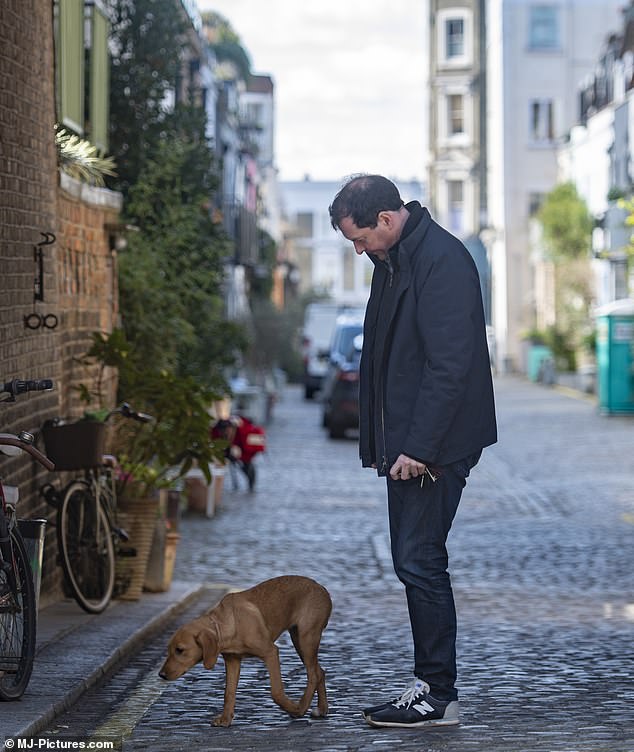 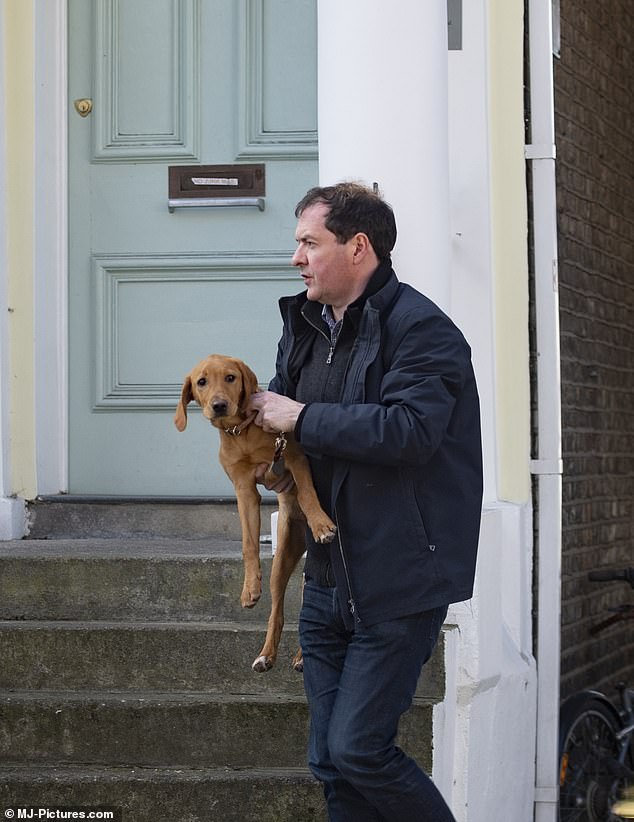 The wallpaper empire heir has forged a lucrative career since losing the Chancellor’s job in 2016. In February 2017, shortly before he decided to stand down as an MP, he started a role as adviser at BlackRock, the world’s largest fund manager, earning £650,000 for a one-day week.

Soon afterwards, he was appointed editor of the London Evening Standard and took on several other academic and advisory roles. Last July he was succeeded as editor by David Cameron’s sister-in-law Emily Sheffield, becoming editor in chief.

He left the Standard and BlackRock last month to take up a full-time role at investment bank Robey Warshaw.

Miss Rogers, a former BBC journalist, is credited with sharpening up Mr Osborne’s image in 2013. She left the Treasury in 2017 to become an executive at Deliveroo and is in line for a multi-million-pound payout following last week’s stock market listing of the food delivery firm.

The Mutz Nutz has been able to open during lockdown to provide services for pets’ welfare but not aesthetic treatments – it boasts on its website that pampered pooches can enjoy a ‘luxurious spa’, ‘Italian baths’ and even a flat screen TV. 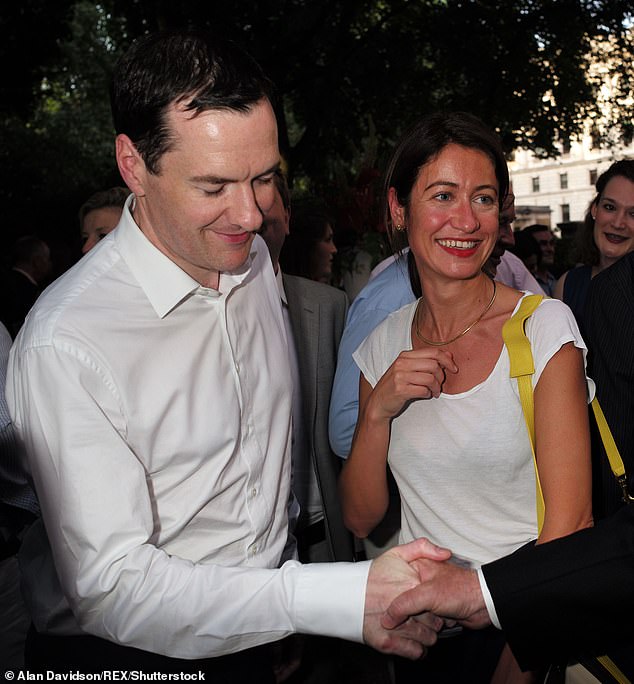 On Wednesday, Mr Osborne, 49, and his former Treasury adviser Thea Rogers, 39, announced their engagement in the pages of The Times. They are expecting their first child in the summer. Mr Osborne has two children from his 21-year marriage to Frances Howell – they divorced in 2019