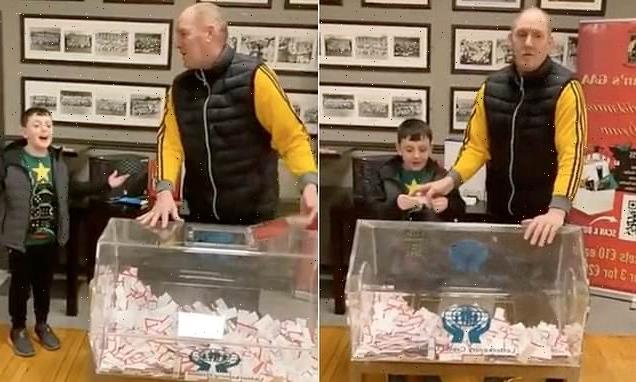 ‘Dad, if we won, we won!’ Football club chairman wins Christmas draw but refuses to take the prize – and his son is not impressed

This is the moment a club chairman passed up tickets to a sell-out concert after his son drew his name in their Christmas raffle – and the boy could not believe it.

He asked his son Ollie to pick the winning ticket in the draw which was being broadcast live on social media because of enhanced Covid restrictions in Ireland.

When the boy revealed he was the winner Mr Haran swiftly picked another ticket as the boy repeatedly protested, saying: ‘Dad, if we won, we won!’ 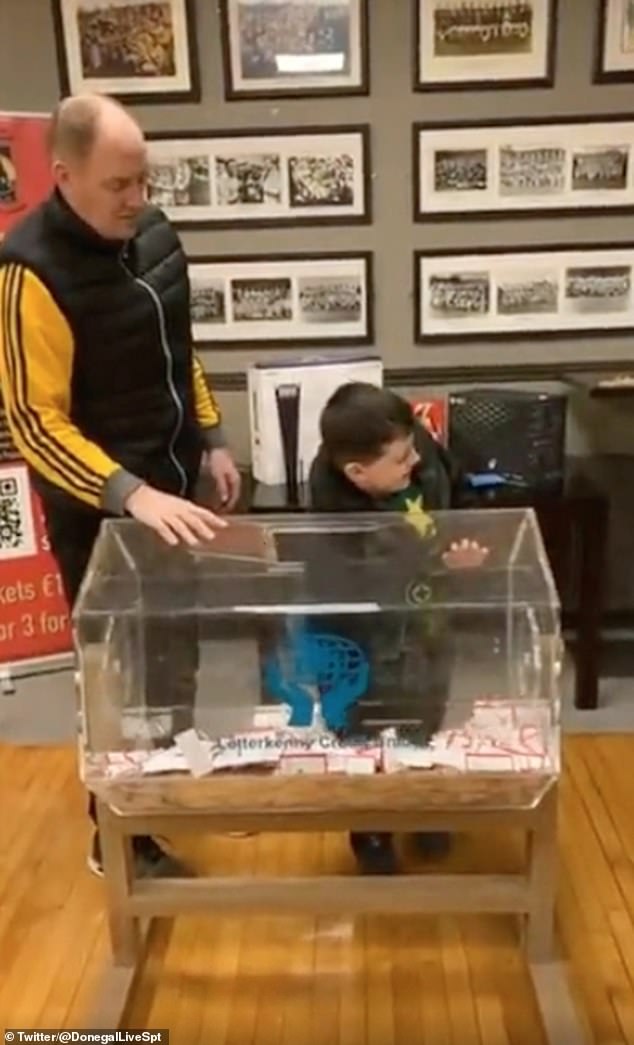 Ollie Haran, right, closed his eyes after his father John, left, told him to pull a ticket for a pair of Garth Brooks tickets for the American singer’s sell-out Dublin visit 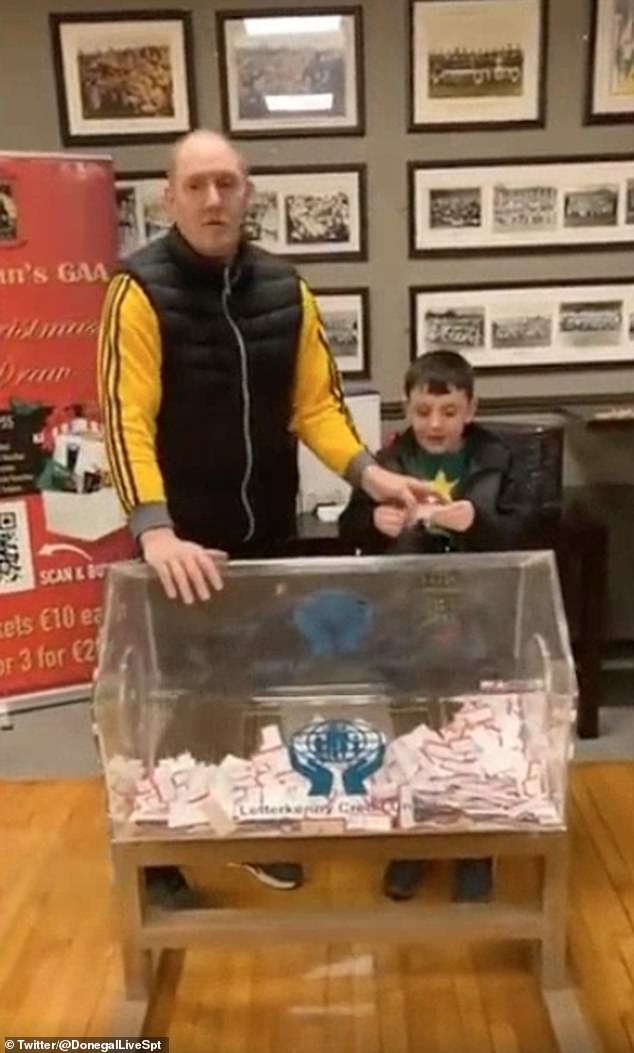 Mr Haran, left, is chairman of St Eunan’s GAA club in Letterkenny, Co Donegal and was organising the draw. He looked visibly embarrassed after his son read out his name

Footage shows the school principal asking his son Ollie to close his eyes and draw the winning ticket from the drum.

The read out the name and shrieked as he realised his father was the winner.

Mr Haran could have gone to Croke Park in Dublin for one of the American star’s five sellout concerts in September 2022.

Looking visibly embarrassed, Mr Haran instead pulled another ticket and read out the details of the lucky winner. 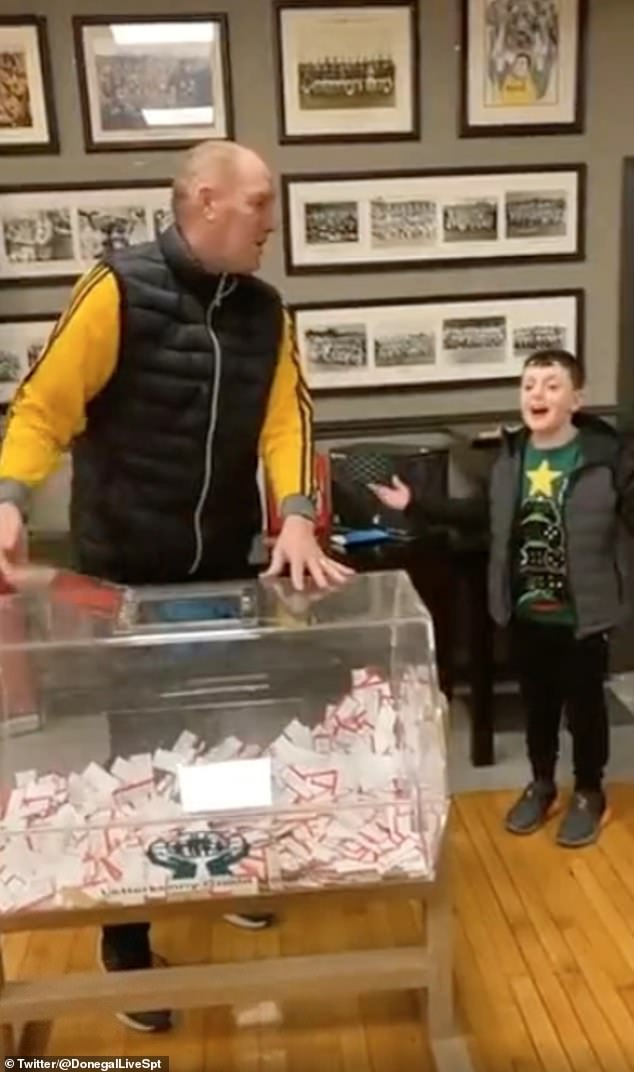 Ollie told his father: ‘If we won we won’. But Mr Haran disagreed and pulled another ticket 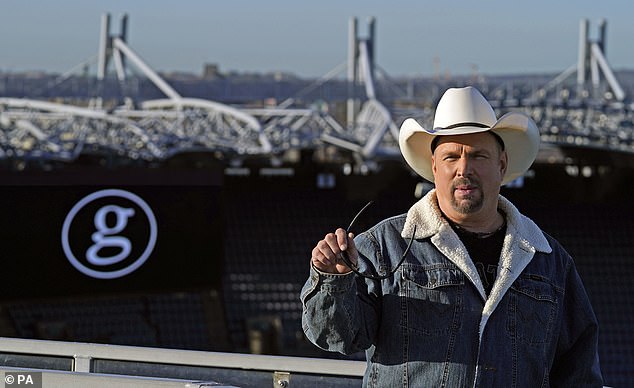 Garth Brooks, pictured at Croke Park, will play five sell-out gigs in Dublin next September to some 400,000 people 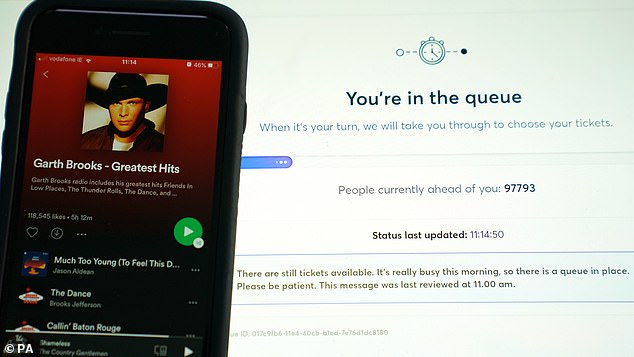 Ollie’s response provoked laughter in the background and people on social media backed his interpretation of the rules, while others hailed his father’s honesty.

One viewer wrote: ‘That’s brilliant. The young lad is priceless.’

Another said: ‘I’m with the child.’

Another pointed out: ‘Fair play but he’ll have to make it up to the wee man.’

The scene was swiftly compared to an episode of hit comedy Father Ted where the priest played by comedian Dermot Morgan rigged a raffle so he won a new car.

In 2014, Garth Brooks sold a staggering 400,000 tickets for a series of five concerts in Dublin but was forced to cancel after the local authority refused to grant permission for the five gigs.

He will play five sell-out gigs in Dublin in September despite the objections of local residents.