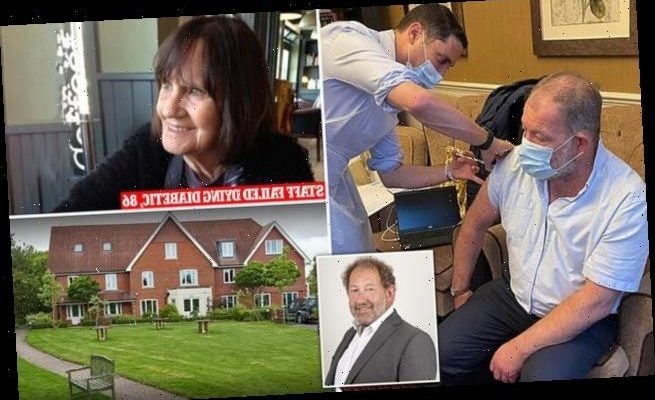 One of Britain’s biggest care home operators was branded a disgrace last night after it emerged that its chief executive received a £1million pay rise in one year.

Barchester Healthcare boss Dr Pete Calveley’s pay more than doubled to £2.02million in 2019 – around 120 times more than some of the care assistants who work for him.

This is despite around one in ten of the group’s more than 200 homes being judged to ‘require improvement’ by the Care Quality Commission watchdog.

Last night MPs and campaigners hit out at the pay packet, saying it was a ‘slap in the face’ to carers working on the front line. 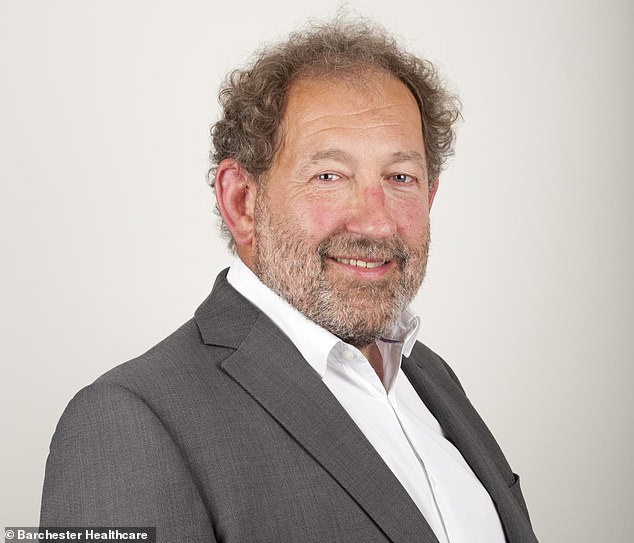 Barchester Healthcare boss Dr Pete Calveley’s pay more than doubled to £2.02million in 2019 – around 120 times more than some of the care assistants who work for him

One charity boss said: ‘It’s appalling and everything that’s wrong with the care sector.’

Former care minister Norman Lamb said the gap between Mr Calveley’s pay and that of his staff was obscene.

News of the huge pay rise comes after it was revealed that Dr Calveley received a Covid-19 vaccine on December 23 – at a time when fewer than one in five vulnerable residents had received their jabs.

Barchester says that 41 per cent of its residents and 34 per cent of staff have now had at least one dose of coronavirus vaccine.

It is more than a year since the Daily Mail delivered a petition to Downing Street calling on the Prime Minister to honour his pledge to fix the broken care system that forces countless pensioners to sell their homes to fund crippling care costs. 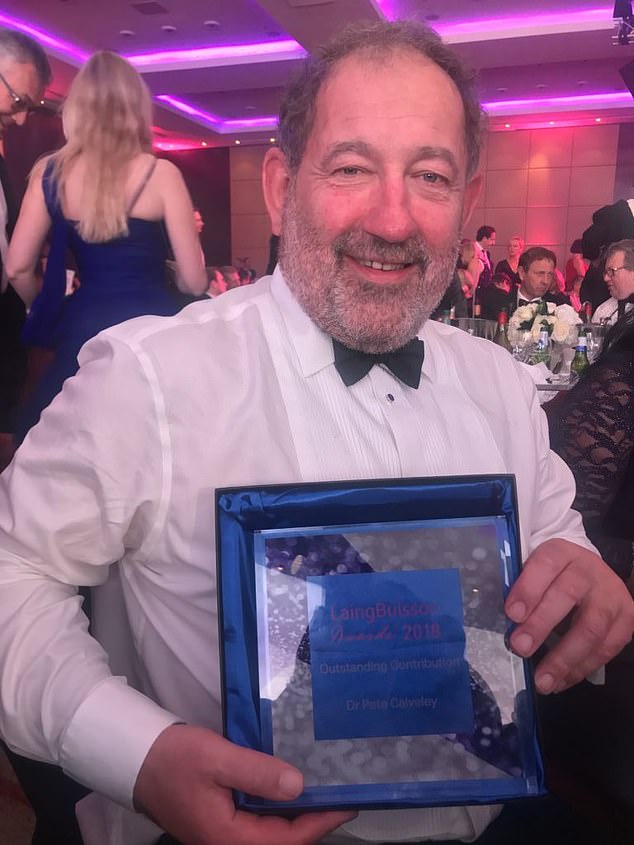 Last night MPs and campaigners hit out at the pay packet, saying it was a ‘slap in the face’ to carers working on the front line

That same year, the company saw its turnover increase by 6 per cent to around £660million due to ‘higher fee rates and improved occupancy’.

Although the firm would not disclose details of its fees, residential care in England costs an average of £2,800 per month, with nursing facilities costing £3,550.

A diabetic resident of a Barchester care home died after staff failed to manage her condition appropriately.

Norma Mckiver, 86, was left to sleep after she was found to have high blood sugar.

A resident at Rothsay Grange Care Home in Andover, Hampshire, she was found unresponsive the next morning and died in hospital in December 2019. 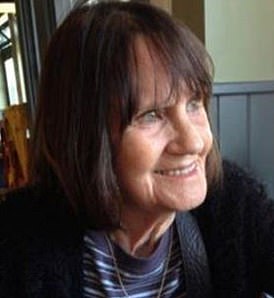 Coroner Rosamund Rhodes-Kemp told an inquest last year at Winchester Crown Court that Mrs Mckiver, who had type 1 diabetes and Alzheimer’s, may have lived had she been taken to hospital sooner.

She said there was a ‘lack of appropriate management of her diabetes’.

The home was rated ‘requires improvement’ after an inspection last year. Barchester said it had ‘made significant improvements’ to diabetic care.

Former care minister Mr Lamb said the gulf between Dr Calveley’s pay and that of carers working in Barchester homes was ‘hard to stomach’.

‘It’s fairly obscene that the gap between CEO and the frontline is so vast,’ he said. ‘The social care workforce we know is undervalued massively for doing extraordinarily tough, demanding work but immensely valuable work.’

Labour MP Peter Kyle, who has campaigned for better social care, added: ‘When you think what £2million could achieve for so many frail and vulnerable elderly people, knowing that it’s going to one person who is already a millionaire is a bitter pill to swallow.’

‘That sort of money shouldn’t be paid to a celebrity footballer,’ she said. ‘You’ve got care staff on the front line putting their lives on the line – it’s a slap in the face.

‘Vulnerable people don’t get rebates when poor care is given. It’s appalling and everything that’s wrong with the care sector.’

At Winchester Court in Rochester, Kent, residents told inspectors they did not ‘feel safe’, according to a CQC report from November 2019. Meanwhile, at Cherry Trees in Warwickshire, where up to 81 residents are cared for, staff shortages meant there were not enough carers on duty ‘to meet people’s needs’ – and one resident described how it had taken two hours for staff to arrive after they had rung a bell for help.

Barchester is currently recruiting for more than 330 care positions – many of which are advertised as paying the minimum wage of £8.72 per hour.

If a care assistant on this rate worked a 37.5-hour-week, they would earn around £17,000 a year – less than one per cent of Dr Calveley’s pay packet.

Dr Calveley, 60, who joined Barchester in 2014 from debt-ridden chain Four Seasons Healthcare, lives in a five-bedroom detached house in Northamptonshire worth around £600,000.

Responding to criticism of his pay rise, Barchester said: ‘In his time as CEO we have improved, from below 40 per cent of services being rated good and outstanding to 88 per cent. 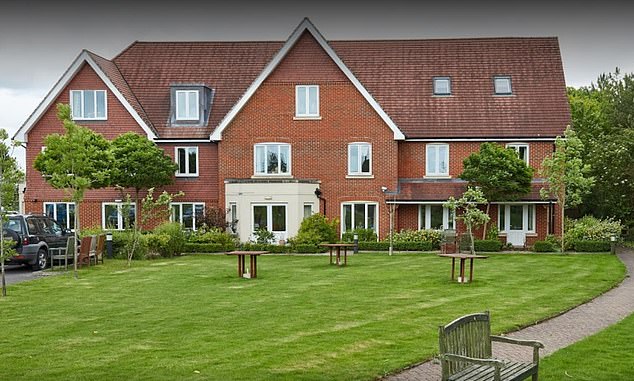 One in ten of the group’s more than 200 homes being judged to ‘require improvement’ by the Care Quality Commission watchdog. One diabetic resident at Rothsay Grange Care Home in Andover, Hampshire, she was found unresponsive and later died in hospital after being left to sleep when she was found to have high blood sugar

‘This reflects the work of all of our staff and particularly our dedicated carers and nursing staff who alongside Pete and the exec team are completely focused on continuing to improve every home in every region for our residents, and who have worked relentlessly to protect our residents and patients throughout the pandemic.’

The company added: ‘The most senior executive’s salary increased solely in line with inflation with the balance of the remuneration increase due to the part-maturation of a four year long-term non-recurrent incentive plan.’

Barchester went on: ‘The CQC and the other national regulators have in 2020 rated 88 per cent of Barchester’s services as “good” or “outstanding”, with nursing services rated some nine per cent higher than the CQC benchmark.’

Just six days ago, Pete Calveley sent a letter to reassure residents of his care home empire and their fearful families. He told them ‘being patient is key’ amid the pandemic, but insisted he was feeling ‘very optimistic’ about 2021.

The reason was simple: the vaccinations that have now been distributed to around 40 per cent of the elderly, sick and disabled people in his 200-strong portfolio of homes, along with more than a third of his 17,000-strong staff.

‘There is light at the end of the tunnel [since] care home residents and staff are a priority for vaccinations,’ wrote Dr Calveley, 60, chief executive of Barchester Healthcare, one of the country’s biggest care providers.

What he failed to mention, however, was that few people had better grounds for good cheer than himself, since Dr Calveley was one of the fortunate few citizens of our country to be vaccinated before Christmas, despite not entering his own homes.

And he is running a money-spinning company that handed hefty salary rises to its top brass, according to the latest accounts, with the package for its best-paid director more than doubling from £915,000 to £2,019,000. 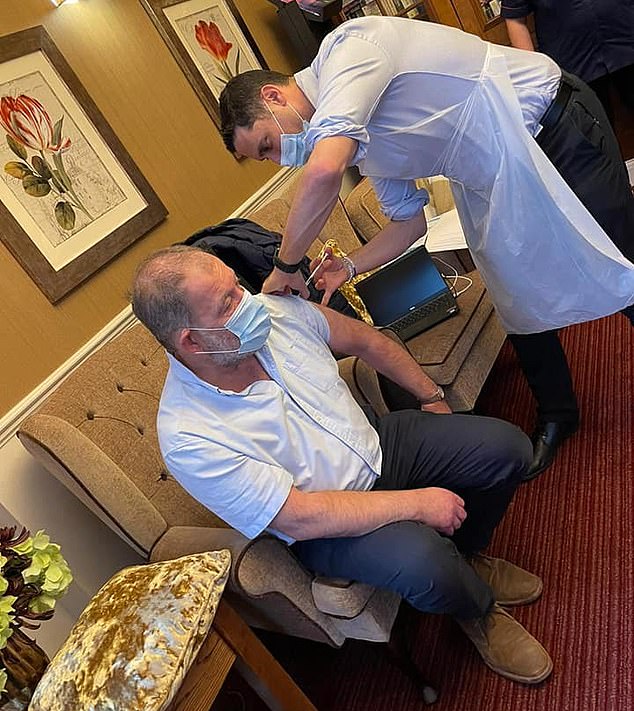 Dr Calveley, 60, chief executive of Barchester Healthcare, was one of the fortunate few citizens of our country to be vaccinated before Christmas, despite not entering his own homes

Meanwhile job advertisements show the firm is recruiting frontline staff on the £8.72 an hour minimum wage, even when caring for some of the most vulnerable citizens in our country on night shifts amid the surging death toll of a pandemic.

Spin doctors for Dr Calveley, a former GP and vasectomy surgeon, insist their boss hopes to visit homes again soon. They also say senior staff at the firm performed a noble public duty by having the jab to reassure residents and workers that it is safe.

Few will be convinced. Not least when two other care home chiefs – one of whom was only 40 years old – have posted similar jubilant photos of themselves on social media being vaccinated.

The daughter of one Barchester resident with dementia told me her elderly mother was vaccinated a few days after Dr Calveley – but only once the virulent new Covid strain had begun rampaging through the care home and infected her.

Another man commented on social media that this did not look good when his father of 94 still had not heard when he was receiving his jab at another Covid-infected home run by the company.

My mother is 89 years old, recently endured cancer, and has not heard yet when she will get the jab – and nor has my daughter, who has complex special needs including epilepsy, while we wait for them to be available in the community.

In fact, that picture of Dr Calveley posted on Facebook, showing the stoic boss with one sleeve rolled up as his vaccination is administered, performs a different service to the one he’d hoped: it illustrates an uncomfortable truth about our crumbling care system.

For it serves as a metaphor for the priorities of the corporate fat cats and grasping private equity barons who have snapped up thousands of care homes, children’s services and mental health units in this country with such disastrous consequences.

The sector complains rightly about cash shortages. Yet some big players are fuelled by debt, hidden behind opaque corporate structures in tax havens and hoovering up fortunes.

Barchester is a private group owned by three prominent Irish billionaires – Dermot Desmond, JP McManus and John Mangier – through a parent company in Jersey with 76 firms in its complex structure.

The latest accounts for 2019 show a healthy rise in revenues to £657.6 million ‘underpinned by higher fee rates’ – which comes, of course, from cash-strapped local authorities and families forced to sell homes to help relatives with dementia.

Profits rose from £10.3million to £15.8million. Remuneration for directors, working in pleasant homes and offices away from daily pressures on the frontline, soared from £1.98million to £3.39million.

Yet this Cinderella sector has suffered shameful state underfunding for many years, even as billions extra were pumped into the precious NHS and politicians spewed out platitudes about the pressing need for social care reform.

The squeeze caused chronic problems, with inadequate provision in homes, collapsing support in communities and staff exploited on dismal pay – even before these services were then devastated by the pandemic.

Clearly too much cash is ending up in the wrong places. Another legacy of these giant firms was a shift towards bigger homes that they could run more efficiently, which led to many more fatalities when coronavirus struck.

The pandemic has certainly exposed a crisis of epic proportions in this sector.

But the complex problems have deep roots – as shown by one simple image symbolising the corrosion of our social care.