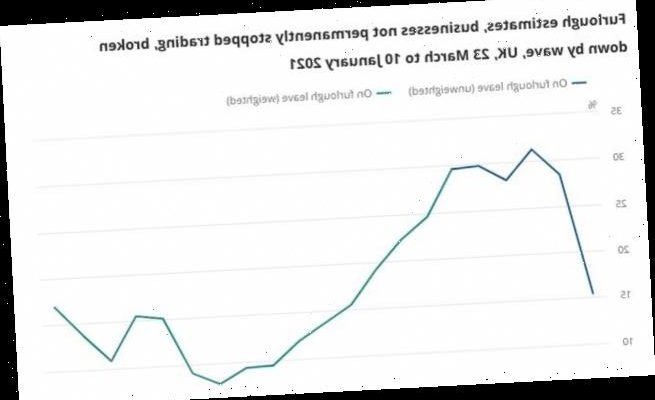 Furlough numbers in January have hit the highest level recorded since last July as the latest national lockdown wreaks havoc with businesses and workers.

Data published today by the Office for National Statistics showed that the percentage of businesses currently trading has remained relatively consistent in January at 71 per cent.

But there has been a spike in the percentage of the UK’s workforce on furlough, from 14 per cent in December to 17 per cent now.

Meanwhile, the percentage of firms currently trading in the accommodation and food service industries has dropped to 34 per cent as the national shutdown hammers the hospitality sector. 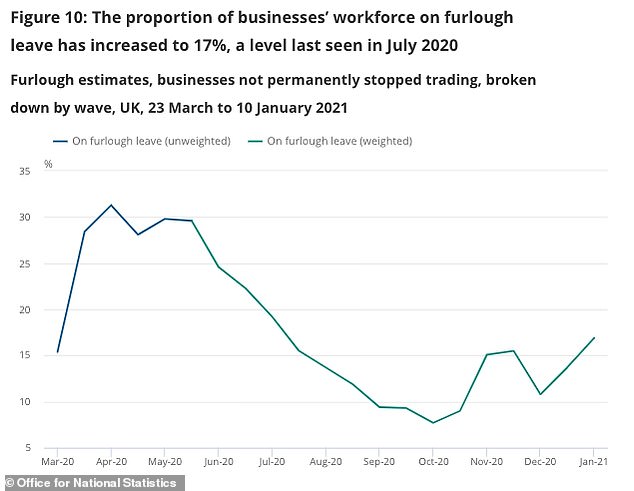 The latest Office for National Statistics numbers show 17 per cent of the UK workforce is now on furlough, the highest level since July last year 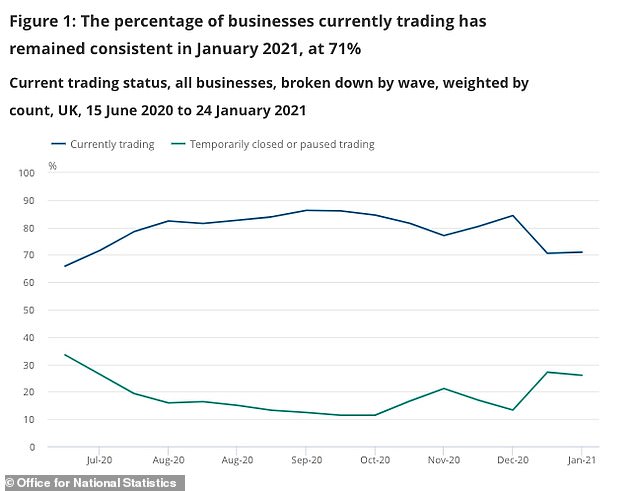 The ONS data is based on the latest results from its Business Impact of Coronavirus Survey for the period between January 11 and January 24.

The furlough scheme, which has been extended to run until the end of April, has seen the Government pay 80 per cent of a worker’s wages up to a monthly cap of £2,500.

The Treasury today published official furlough numbers for the end of last year, showing that more than one in eight UK workers was furloughed at the end of December with almost £6billion claimed in the final two months of 2020.

The Government data showed 13 per cent of employees across the country were furloughed on December 31, and that more than one in three employers were claiming money to pay their staff as part of the scheme.

The end of October saw new claimants being allowed to be placed on furlough as the pandemic proved to last longer than initial estimates.

The number of people on furlough shot up from 1.7 million at the end of October to 4.1 million a month later as a result.

Charlie McCurdy, a researcher at the Resolution Foundation think tank, said: ‘The Job Retention Scheme has been a living standards lifeline for millions of workers, with three in 10 private sector workers furloughed at the peak of the first lockdown.

‘And with the UK back in lockdown, over four million employees are likely to be on furlough right now.’

He added: ‘The winding up of the scheme in just three months’ time is expected to cause a fresh wave of unemployment.

‘It’s vital therefore that the Chancellor ensures a flexible transition out of the scheme, in order to avoid millions of workers simply moving from furlough straight into unemployment.’ 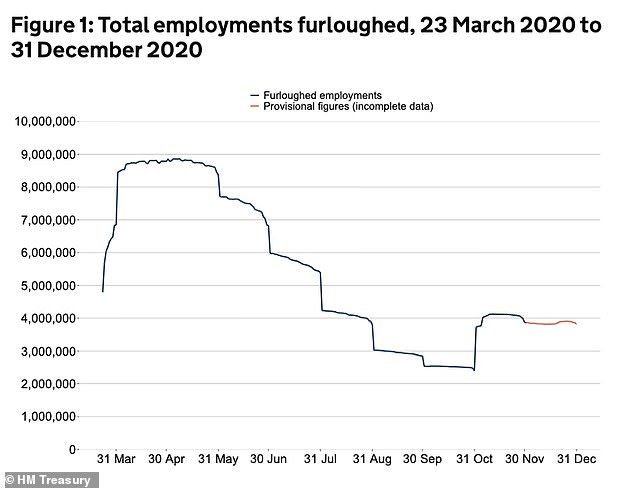 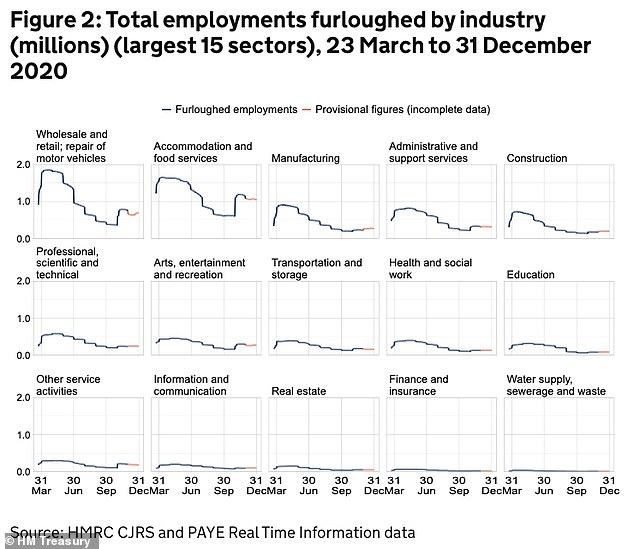 Separate figures from the Treasury also revealed that businesses are still needing massive levels of financial support, with another £1.2billion paid out in bounce back loans, which are worth up to a maximum of £50,000.

Nearly 40,000 more businesses were granted a bounce back loan between December 13 and January 24, while around 66,000 applied.

Another £1.4billion were lent under two other loan schemes, bringing the total for Treasury-backed loans to nearly £71billion since the start of the pandemic.

‘As economic uncertainty due to the pandemic continues, many individual businesses and some specific sectors are facing significant and extended disruption and may find themselves in financial difficulty,’ said Stephen Pegge at UK Finance, the trade body for banks.

‘With widespread restructuring and recovery situations expected, the finance sector and related professional services are focused on providing the capacity and expertise to help support the turnaround of companies where possible, while ensuring the sympathetic treatment of those businesses which are no longer viable.’ 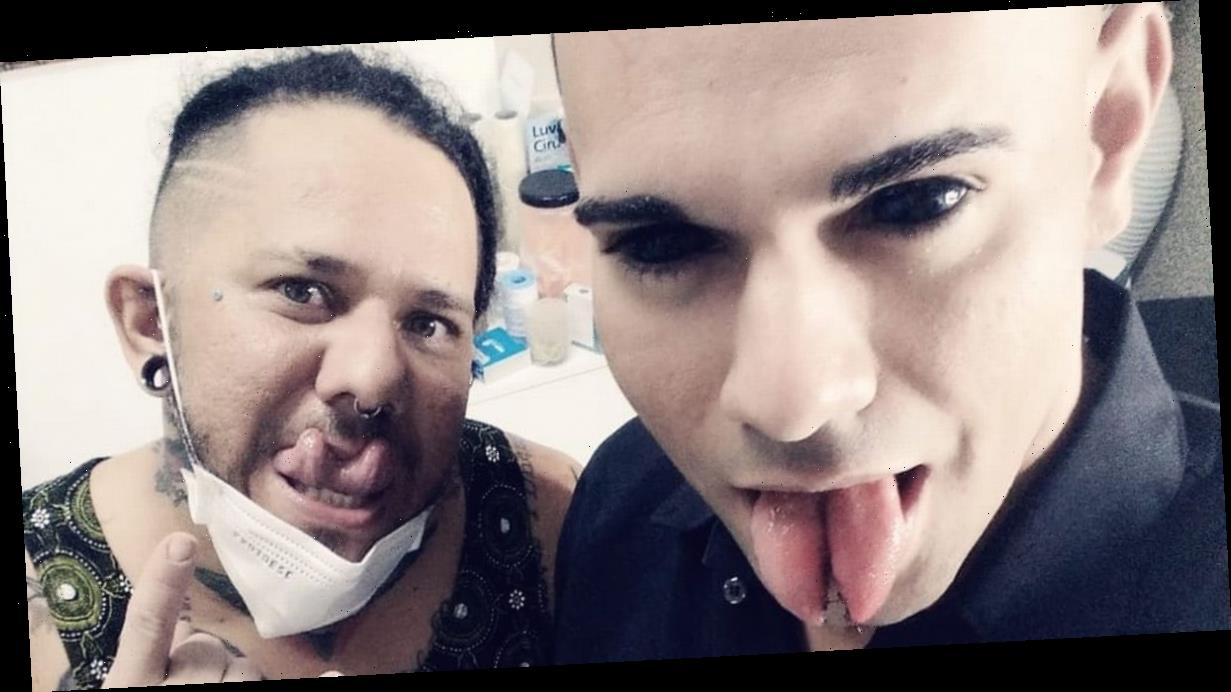 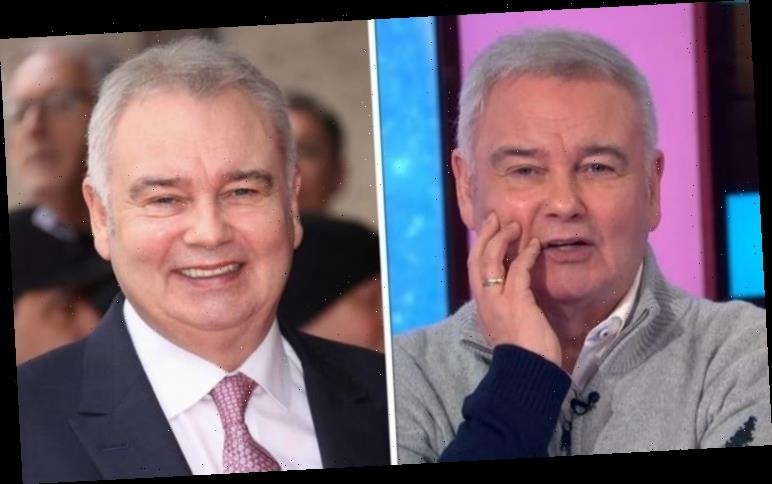