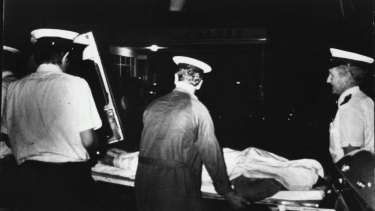 Ten men and five women died when two fire bombs exploded in the foyer of the Whisky Au-Go-Go just after 2 a.m.

It was smeared on the stairs of the fire escape at the back of the club.

The door of the fire escape was also greased.

Police believe the bomber wanted to kill as many people as possible. He had put grease on the stairs in case some people got out of the club. 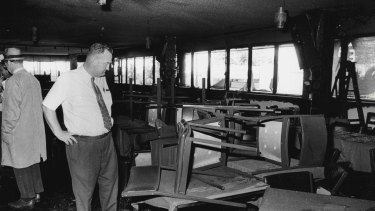 One senior policeman said: “Whoever did this thing is insane. He wanted to kill as many people as he possibly could.

“If some of the people had got to the escape door they would have fallen down the stairs and died that war,” he said.

It was the worst mass murder in Australia’s history.

Police last night questioned a man – believed to be from Sydney. The man arrived at police headquarters with a solicitor and told police he had information about the disaster.

Police have almost discounted that the murders were part of an extortion racket. They are working on the theory that the killer struck for revenge.

“You don’t try to kill as many people as you can if all you are doing is a bit of extortion,” said one homicide detective.

“This murderer wanted revenge for something.”

Two detectives, one from Melbourne and one from Sydney – will fly to Brisbane this morning to help Queensland police.

The 15 people killed were among 100 at the club when the two bombs exploded in the front foyer.

The others escaped by smashing their way in a frenzy through first floor windows and leaping 15 feet to the ground.

Police scientists have established that diesel fuel was used in the two bombs made out of four-gallon drums.

The murderer threw the drums into the foyer and then ignited them with a torch thrown through the doors.

Fire raced through the front of the building and the diesel fuel went carbon monoxide fumes up to the main room of the nightclub.

The 15 people died of suffocation as they frantically tried to open the greasy door of the fire escape. Police believe they would have fallen down the steel stairs if they had managed to open the door.

A fire brigade officer said last night that he could hear the people screaming behind the closed door as firemen tried to smash it down.

A private inquiry agent, Mr J. Ryan, said he had told several police officers earlier this week about a bomb threat to the club.

Mr Ryan said he had been employed by two nightclubs to investigate threats made to the club management.

The mass murder caused a political storm in State Parliament when the Government refused to debate the tragedy with the Opposition.

Labor members accused the Police Minister (Mr Hodges) of ignoring the warnings given to police that underworld figures had planned the bombings weeks ago.