The Federal Aviation Administration (FAA) reportedly ordered a full ground stop at airports in the western U.S. on Monday around the same time that North Korea was believed to have launched a ballistic missile into the Sea of Japan.

It was not immediately clear whether both incidents were related.

The FAA did not immediately respond to multiple requests from Fox News for information.

Sugars said there was no reason given for the ground stop. 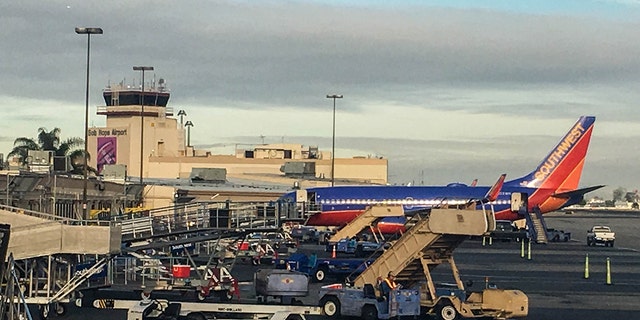 Hollywood Burbank Airport in California halted flights for about 15 minutes after the FAA ordered a ground stop at about 2:30 p.m. local time, an airport spokeswoman told Fox News Digital.
(iStock)

Flights were also halted from taking off for about 5 to 7 minutes at San Diego International Airport after air control advised of a national ground stop around 2:30 p.m. local time, airport spokeswoman Sabrina LoPiccolo told Fox New Digital. She referred Fox News to the FAA for more information.

Radio recordings of air traffic controllers advising of the ground stop were obtained by news outlets.

At California’s Burbank Airport, air traffic controllers asked a pilot to land after saying they were advised of “some sort of national security threat,” NBC “Today” reported.

Another recording at Hillsboro Airport, outside of Portland, Oregon, captured ground control telling pilots about the ground stop and turning planes away, Newsweek reported.

North Korea fired what appeared to be a ballistic missile into its eastern sea early Tuesday local time, the militaries of South Korea and Japan said. Its marks North Korea’s second launch in a week following leader Kim Jong Un’s calls to expand its nuclear weapons program in defiance of international opposition.

South Korea’s Joint Chiefs of Staff said North Korea fired what likely was a ballistic missile from the area of its northern Jagang province and flew 434 miles at a maximum speed of around Mach 10 before landing in waters off its eastern coast. It said the weapon demonstrated a more advanced capability than North Korea’s launch last week.

The launches follow a series of weapons tests in 2021 that underscored how North Korea is continuing to expand its military capabilities during a self-imposed pandemic lockdown and deadlocked nuclear talks with the United States.