Fire authorities are turning their attention to highly populated communities on Melbourne's urban fringe, which they say are at increased risk of dangerous grass fires this summer.

In an interview with The Age on Friday, Forest Fire Management Victoria chief fire officer Chris Hardman said authorities were especially concerned about the peri-urban pockets around Melbourne due to the density of the population and their close proximity to bushland. 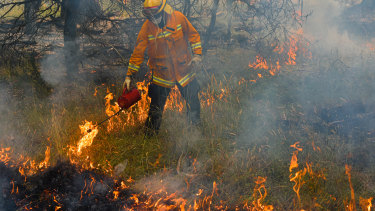 The town of Corryong in Victoria’s north-east was hit hard by bushfires in January.

“From the Barwon Otways right through those suburbs on the edges of Melbourne through to Daylesford and up into the goldfields area south of Ballarat coming across the north into hills and into Warburton and the Dandenong Ranges, they are the areas with the highest level of risk now,” Mr Hardman said.

“Whenever you get a large population centre, that is where the highest risk is because our priority is life. Life always comes first.”

Earlier this week, fire crews were put on high alert after a grass fire threatened a housing estate in Melbourne’s west.

Residents of Mount Cottrell, Truganina and Chartwell were urged to leave their homes on Monday evening as the fire burned out of control until firefighters contained the blaze later that night. More than 50 crews were called to battle the fire.

The latest fuel management report from Forest Fires Victoria showed that the risk of bushfire was 64 per cent in 2019-20, compared with 69 per cent for the previous period.

The priorities for fuel management in a three-year burning program include forested areas in Ballarat, Castlemaine, Macedon and Bacchus Marsh and the Surf Coast and Otway hinterlands as well as forests in Melbourne’s north and east.

Mr Hardman said the state’s fire suppression resources, including some of the state’s record number of 51 summer aircraft firefighting fleet, additional 740 firefighters and 400 plant contractors, had been allocated to the high-risk areas.

“A hard, aggressive first attack is critical in those areas,” he said. “Even though those areas are highest risk, we find that if we apply our resources there it will ensure that the risk is mitigated as far as possible.”

Mr Hardman stressed that despite the coronavirus pandemic, planned burns and bushfire preparations were largely unaffected.

“Whilst the bulk of the population were keeping themselves safe staying at home our folks were out in the bush getting ready for the bushfire season and doing all the preparation,” he said.

“The work they do is critically important and the [pandemic] didn't really impact the program at all.”

A state government report analysing Victoria's bushfire risk released late on Friday revealed that in 2019-20, there were 230,000 hectares of public land scheduled for fuel management. However, 130,000 hectares had been burnt by bushfires or were inaccessible to crews.

The report also revealed the risk of fires in the Grampians increased to 75 per cent in 2019-20 up from 69 per cent the previous year.

It also showed that the risk of fires rose by 7 per cent in the Loddon-Mallee region hovering at 72 per cent, up from 65 per cent the previous year.

When the Royal Commission into National Natural Disaster Arrangements handed down its final report to the federal government in October, survivors of last year’s horror bushfires pleaded with all levels of governments to take the threat of climate change as seriously as they have the coronavirus pandemic.

He noted there had been a 20 per cent reduction in spring rainfall since 1972 and 40 per cent surge in very high fire danger days in Victoria in recent years.

“We've seen 170 per cent increase in bushfire ignitions so climate change is here and it continues to challenge us,” he said.

“We need to and we have been thinking about how we advanced forest fire management in a rapidly changing climate. We're looking at everything from the capability, the skills, the equipment, the aircraft, how we deal with fuel management going forward. We are one of the most bushfire-prone areas anywhere in the world and we need to live with this ever-present risk of bushfires. It’s about doing everything we can to mitigate the spread and impact and intensity of these bushfires.”