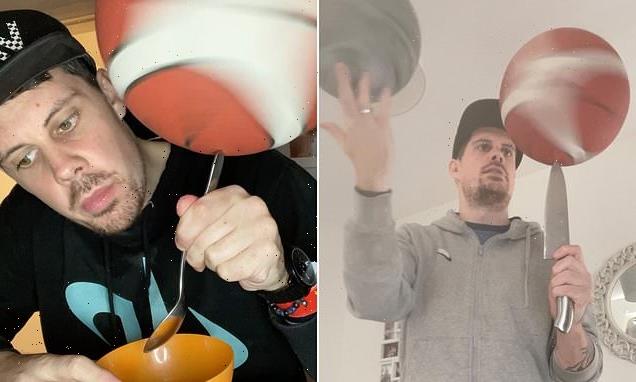 Spin ball wizard! Father-of-three shows off his basketball tricks – incorporating knives, pencils and even his spoon while he eats cereal

This video compilation shows a talented man spinning a basketball on some of the most unlikely household objects.

From knives, to mobile phones and even on the end of a spoon, Anthony Lefley, 32, from Essex, can spin a basketball on anything.

He has filmed a sequence of his trick shots on TikTok which has left many amazed by his skills – as he can even do it while eating cereal.

Anthony said: ‘ I find skills and trick shots with a basketball almost therapeutic. 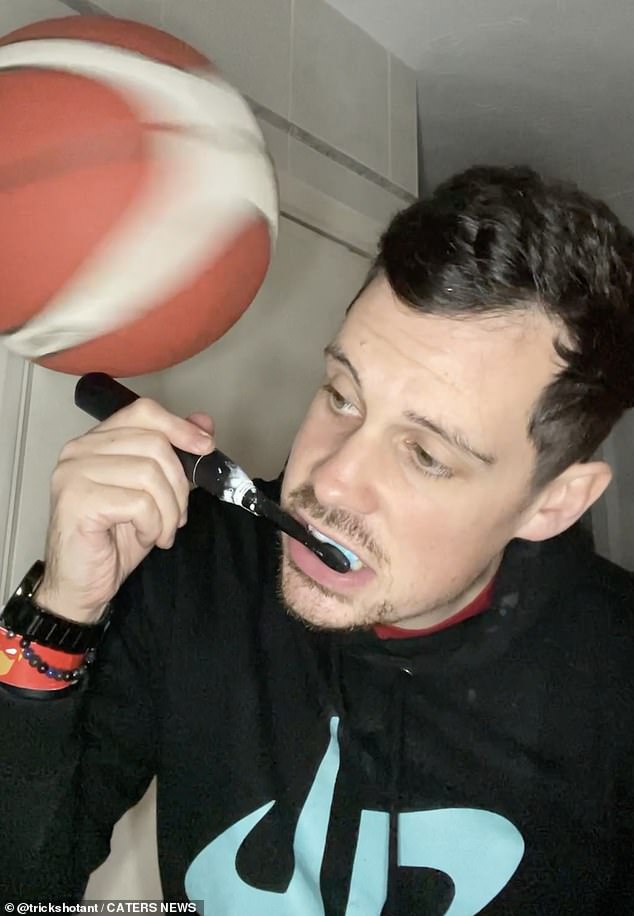 Anthony Lefley, 32, from Essex has become a TikTok sensation for turning normally mundane daily activities into opportunities for basketball-spinning tricks

‘I always try to come up with cool content that I feel my followers on TikTok would love to see.

‘They can sometimes take hours to perfect but it’s worth it to see once the videos come together.

‘I will walk around the house or be doing something really mundane like shaving and then think, I wonder if I can spin this ball on the razor whilst I shave? 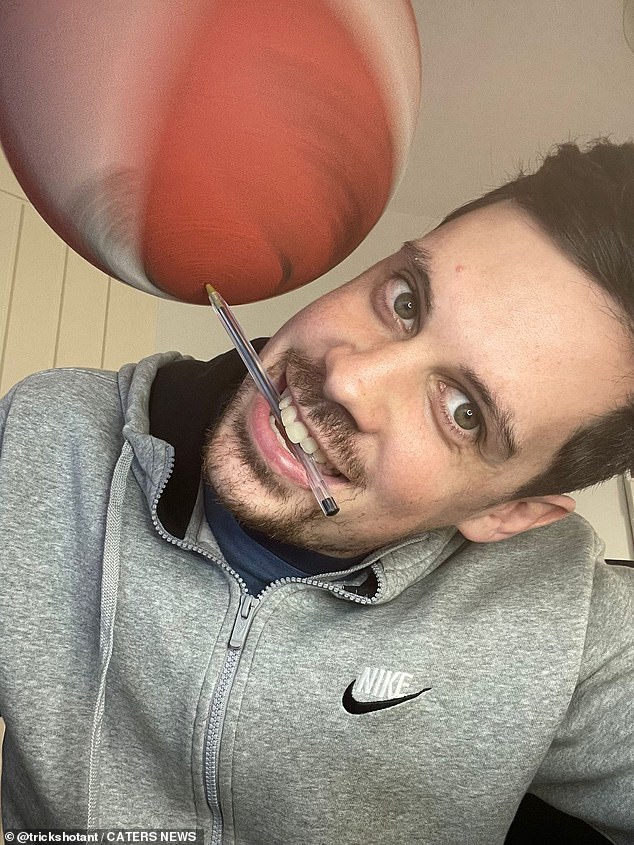 As if spinning a basketball on the tip of a biro was not difficult enough, Anthony does it all while gripping the pen between his teeth 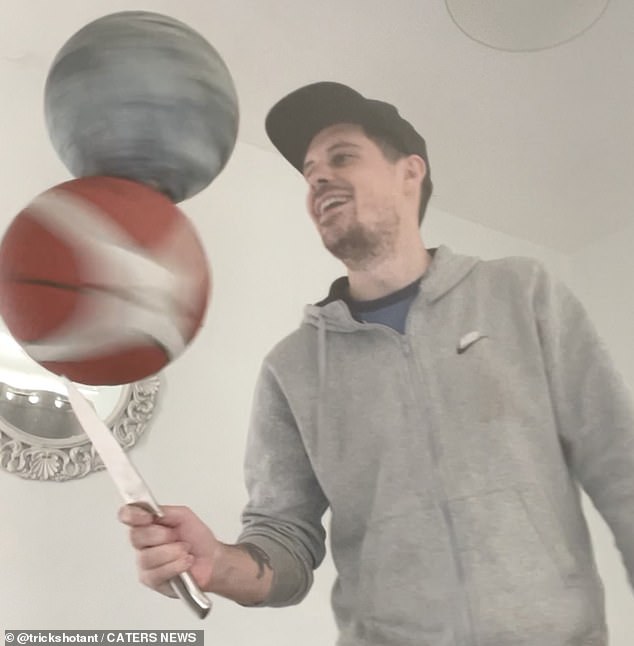 A kitchen knife is the base for a double-ball spin, as Anthony embraces an element of danger in this particularly mesmerising trick

‘I also enjoy trying to keep the ball spinning on a spoon whilst eating, which I have gotten pretty good at now, but it took a lot of practice!

‘I also once did a cool video where I span the ball on a banana whilst eating it which looked really great.’

Anthony spends at least 2 hours a day normally practicing his various tricks with the basketball.

He explained: ‘It is a great way to unwind after work or just in my general free time.

‘I think any skill can be learned but you have to enjoy what you are trying to learn, or you will never really be invested.

‘Some videos now I can nail in one or two takes but occasionally for the tougher trick shots that I do it can take significantly longer to perfect..’

Anthony started sharing his talent on TikTok at the start of the lockdown, and has since amassed over 200,000 followers. 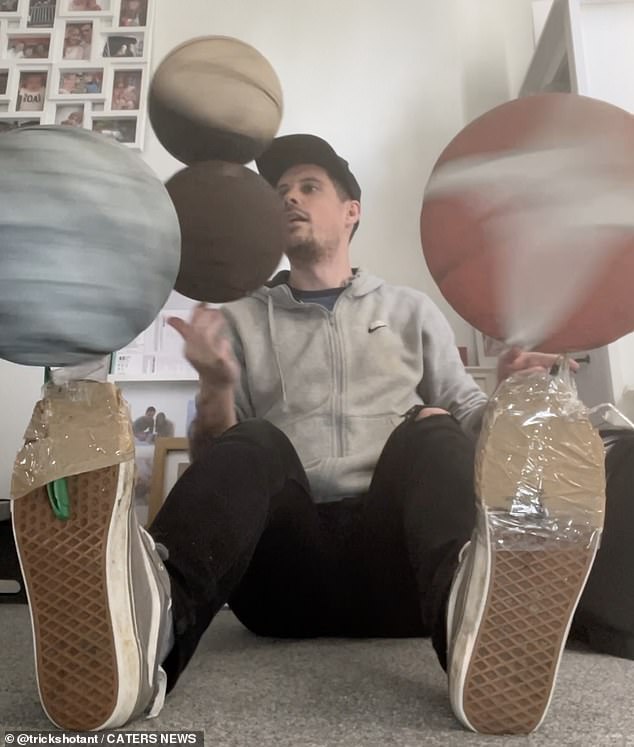 He explained: ‘ The lockdown was tough for a lot of people, and it was a good outlet for me to do something creative.

‘I bought a hoop for the garden and started posting regularly, before long I was gaining quite a lot of traction once my videos began hitting the

‘The love I get on the videos is incredible to see.’

In one of Anthony’s videos, he can be seen spinning basketballs on pens in both hands, and on both feet as well.

He added: ‘ That video was a real challenge as you need to get the right amount of power on the balls spinning on your feet in order to be able

to also incorporate your hands.

‘A lot of these are also incredible workouts as you do end up building quite a sweat!’

Despite being a whiz with the basketball, Anthony only really embraces the sport as he was finishing school.

He said: ‘Growing up in the UK, basketball is very much a secondary sport and is nowhere near as popular as it is for example in the US.

‘As I was leaving school to start college at around 16-17 years old, I started to play it a bit more recreationally and this is where I learnt to spin

the ball and the fundamentals of the sport.

‘I came to realise that I was not going to make it in a professional capacity in the sport or make money from it, so the trick shots are an amazing way to keep it up.’ 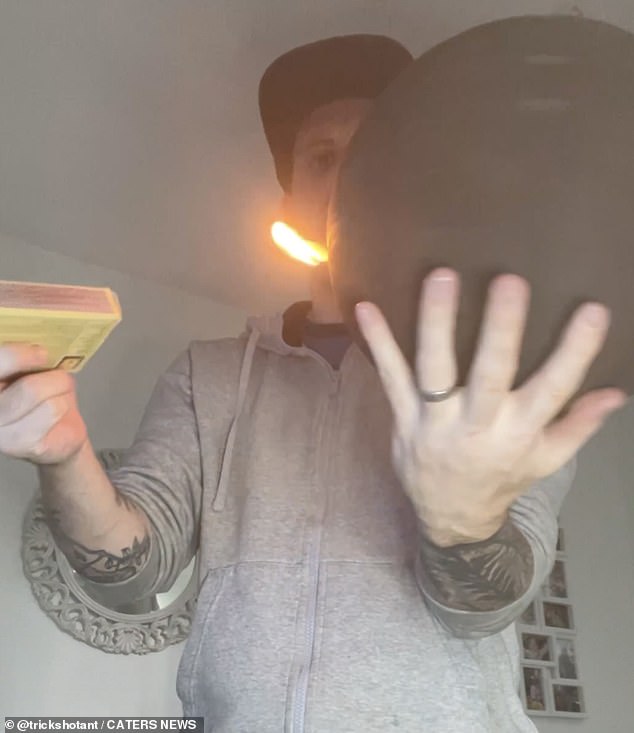 The ‘spin ball wizard’ even manages to light a match attached to the rotating ball, striking it against a phosphorus pad 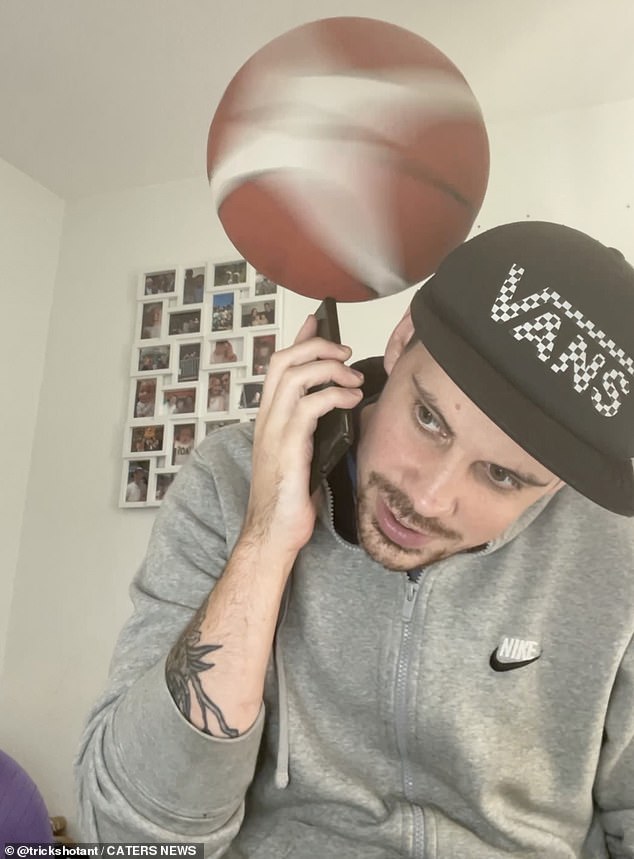 An incoming phone call is no reason for Anthony to stop his favourite hobby: he shows he can maintain a conversation on his mobile while spinning a ball on top of the phone

Anthony has a wife, Kirsty Lefley, and three children, Hugo, five, Rory, three and four-month-old Pippa, who are all really supportive of his skilful hobby.

He explained: ‘My wife is the most supportive person ever and has never gone too hard on me when the odd plate got smashed during a video.

‘My two boys are also getting really invested and love to see me spinning the ball.

‘I think if they eventually start learning a lot of these tricks themselves and will become far better than me one day!’

Anthony also loves suggestions from his followers on cool videos and projects he can try in the future.

He said: ‘ I am always open to new ideas and challenges for trick shots and skills.

‘It’s great to keep pushing myself to try and do better and really perfect certain skills.

‘There are plenty I have not yet mastered and may never get the hang of, but I will always give 110% effort in trying them out.’