It is too early to say if the new variant of COVID-19 spotted in South Africa will become a major player in the pandemic – or fizzle out like many variants spotted before.

Known as C.1.2, the variant has attracted panicked headlines around Australia and the world due to its collection of mutations, some of which it shares with other variants of concern. 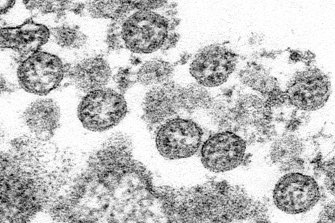 An image of coronavirus particles from what was believed to be the first US case of COVID-19. Credit:AP

But so far there is no evidence of a serious increase in transmission, says the World Health Organisation, which has not even labelled it a variant of interest.

“It’s far too early for any concern,” said Dr Megan Steain, a virologist based at the University of Sydney. “It’s important for scientists to monitor what’s out there so we know, but we can’t have the public get concerned whenever a new variant pops up – because this is going to keep happening as the virus keeps spreading.”

The variant was first identified in May, but has been drawing interest since a team of South African scientists uploaded a new paper – not yet peer reviewed or published in an academic journal – on August 24.

It has now been detected in seven countries, including New Zealand, Portugal and Switzerland. The number of times the virus has been seen in South Africa has been increasing – however, it remains an extremely small number, just 2 per cent of sequenced infections in July.

C.1.2 is not the same as the Beta variant which also first appeared in South Africa. Some cases of that strain have been recorded in Australia.

The virus has a collection of mutations identified in other variants of concern and linked to increased spread or antibody-evasion, as well as new ones not seen before – which is what attracted scientists’ attention.

However, as the pandemic has gone on, scientists have learnt that a new variant can’t be judged simply by the mutations it carries. It is how the mutations work together that matters: the whole is greater than the sum of the parts.

This means we need to wait for either laboratory studies showing the virus behaves differently – which are under way at the moment – or real-world data showing a sharp increase in infections.

“Delta looks tame on paper, but in the real world is a beast,” said Associate Professor Stuart Turville, who heads a lab dedicated to variants at the Kirby Institute. “Everyone got excited about the Lambda variant, but it never competed with Delta.”

“The dust needs to settle. We can’t cry wolf until we see it accelerating in the community. It’s low numbers and too early.”

The key sign to watch is how the virus competes with the Delta variant, said Dr Steain. If the virus’s mutations make it “fitter” – better able to infect and spread – we could see it outcompete Delta, with Delta infections falling. If not, C.1.2 may fizzle out.

“Vaccines offer high protection against severe infection and hospitalisation against all these variants so far. That’s the key. We need to get vaccines into everyone.”

Liam Mannix’s Examine newsletter explains and analyses science with a rigorous focus on the evidence. Sign up to get it each week.