‘We are devastated’: Family are forced to watch from their bedroom window as thieves drive away in their BMW

This is the horrendous moment two thieves broke in to a family’s house before taking their BMW – while the watched in horror from a bedroom window.

The family were woken up by the lights from their BMW as the thieves drove away from their house in Darlaston, between 1am and 1.30am yesterday morning.

And CCTV caught the moment two thieves climbed over a wall to get to the back of the house where they broke inside.

The footage then cuts back to the thieves as they leave the house, clamber back over the wall, and get in to the family’s BMW.

When the BMW is unlocked by the burglars the lights wake the family and they are forced to watch as their car is driven away.

They told Black Country Live : ‘We normally take our key upstairs with us and put it in a special pocket for keyless cars, but last night we forgot to do it.

‘The lights from the car woke us up and we watched them drive off in our car.

‘We haven’t slept all night, it’s been horrendous.

‘We are devastated and heartbroken. We have worked so hard to build up our house and car. It was 10 minutes for them and all of our lives gone in 10 minutes.

‘My babies were sleeping upstairs. I don’t feel safe in my own home knowing that those two men came in to my house.’ 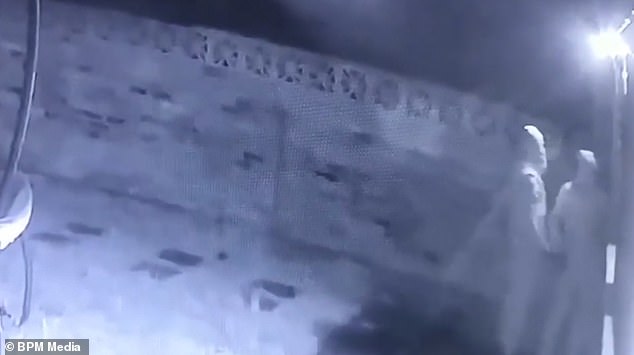 The footage then cuts back to the thieves as they leave the house, clamber back over the wall, and get in to the family’s BMW

The family claim that they suspected next door was going to be targeted so they reported it to the police, however, they now believe the criminals may have actually been watching their property.

‘It doesn’t matter how safe you are we made a mistake and they took a chance. You can’t have anything nice nowadays.’

A spokeswoman for West Midlands Police said: ‘Police are investigating after a car was stolen following a burglary at an address on Kings Hill Close in Darlaston this morning. 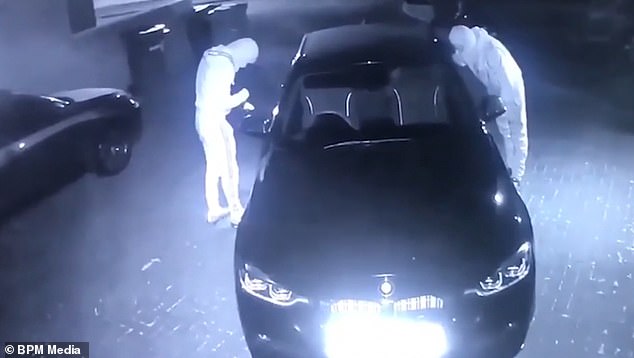 ‘The house was broken into through a rear door between 1am and 1.30am. Keys to a BMW were taken from inside the house and the car was driven off.’

Anyone with information can contact us via Live Chat at west-midlands.police.uk between 8am and midnight or call 101 anytime quoting 20WS/119856X/19.