This is the shocking moment a family had a miracle escape after a van veered across the road and smashed head-on into their vehicle.

Electrician Nick Miles, 54, and his two sons, Luke 25, and Ryan, 22, somehow walked away from the horrific 50mph collision unscathed.

Dashcam footage shows the driver of the white Ford van travelling in the opposite direction when he suddenly strays across central white line without warning.

Nick swerved onto the grass verge at the last moment which meant the driver’s side of his work van took the brunt of the impact.

The dad suffered cuts from flying glass and pelvic injuries which had to be treated in hospital. His sons, who were sat in the two front passenger seats, were uninjured.

The other driver also escaped injury and although he was spoken to by the police at the scene, he was not arrested.

Police have launched an investigation into the collision that happened on the A350 near Blandford, Dorset. 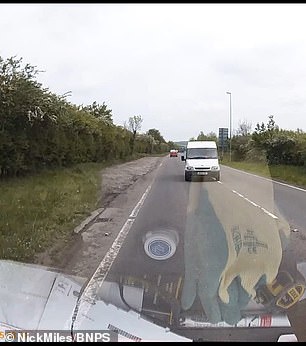 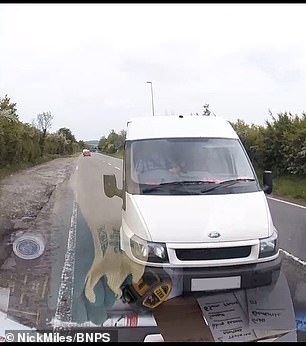 Dashcam still of the white van veering into the path of the van being driven by electrician Nick Miles. The father told his boys to brace after the van continued to head straight for them 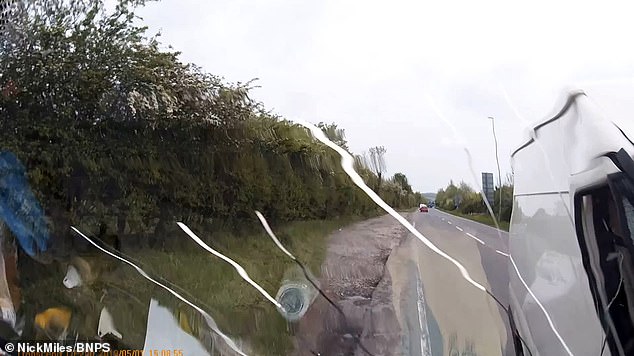 Electrician Nick Miles and his two sons, Luke 25, and Ryan, 22, somehow walked away from the horrific 50mph collision unscathed. Cracks can be seen forming in the windshield following the impact

Nick, 54, said: ‘We came off the Sunrise Industrial Estate at Blandford and headed to the roundabout that joins the Blandford bypass.

‘As I straightened up after the roundabout I could see the van on the white line. I looked at my boys and said ‘look at this joker, crossing the white line’.

‘Then, a couple of seconds later, I said ‘Jesus Christ he is still coming’.

‘It happened all in eight seconds, as you can see from the video.

‘I was bouncing along the grass verge, thinking ‘bloody hell, he’s still coming at us’, then I told the boys to brace themselves.’ 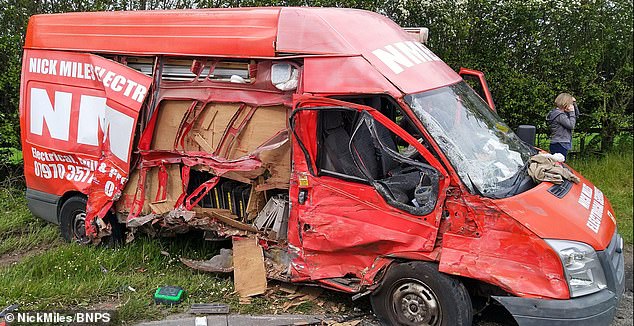 Electrician Nick Miles’ van after the accident. Police told the family they had been ‘very lucky’ with the few injuries they sustained considering the impact

Mr Mile’s was hit by the airbag as it detonated and had glass in his face and side. His sons were unhurt

‘I was hit by flying glass and the airbag, I had glass in my face, shoulder and arm on my right side, and lacerations on my left arm.

A police officer told the trio they had been incredibly lucky.

Nick, who is on antibiotics for his wounds, said: ‘We were very close to being rolled over, he hit us that hard.

‘He came over to me and said, ‘are you the driver?’

‘He said ‘my friend, you are a very lucky man, if I was you I would do the lottery this weekend’. He carried on to say he’d seen people die in a lot less worse crashes than this one. 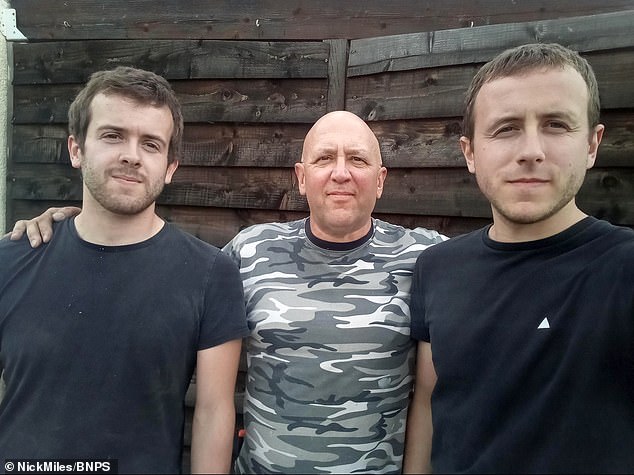 Electrician Nick Miles and his two sons, Luke 25, and Ryan, 22, somehow walked away from the horrific 50mph collision unscathed 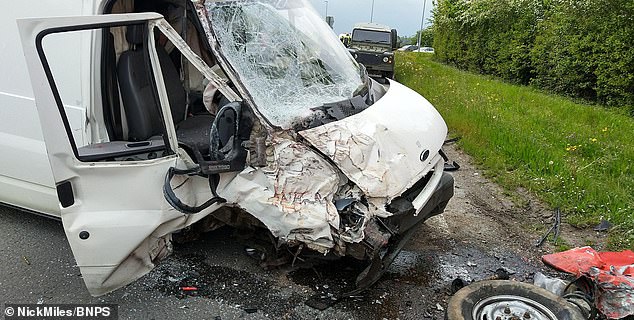 The van which veered into the path of the one being driven by elecrician Nick Miles. The  driver of the other van was also thought to have sustained minor injury

‘We were lucky to walk away, that is generally acknowledged by everyone who has seen the pictures and seen the video.’

Nick said the driver of the other van did not check to see if him and his sons were okay afterwards.

He said: ‘I know absolutely nothing about him, he didn’t speak at the scene, he didn’t come over to check how we were – he didn’t utter a word to me.

‘He was interviewed and breathalysed by police and he hadn’t been drinking.

‘That bypass is normally quite busy, but at the time it happened there was nobody behind him and nobody behind me, lucky really as it could have been worse if other vehicles were involved.’

Dorset Police confirmed no arrests had been made at this stage of the investigation.