Ashalim, Israel: You shouldn’t look at it directly, but that’s easier said than done. Drive through the crags and craters of the Negev Desert, and it’s difficult to miss: a piercing light, mounted on an austere grey tower, more than 800 feet high. It’s visible even from space.

This is the great solar tower of Ashalim, one of the tallest structures in Israel and, until recently, the tallest solar power plant in the world. 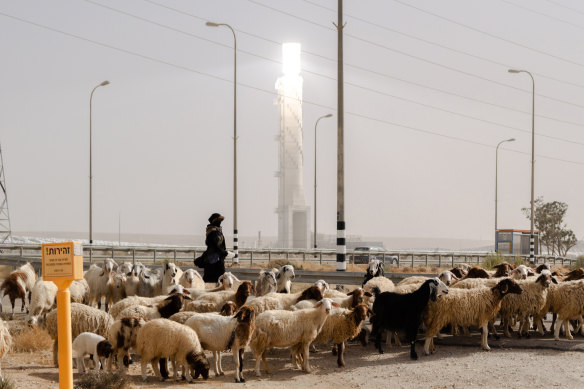 “It’s like a sun,” said Eli Baliti, a shopkeeper in the nearest village. “A second sun.”

To backers, the tower is an impressive feat of engineering, testament to Israeli solar innovation. To critics, it is an expensive folly, dependent on technology that had become outmoded by the time it was operational.

But for Baliti and the 750 or so other residents of the nearby village, Ashalim, after which the plant is named, the tower is something far more tangible. It is the ever-present backdrop to their lives, a source of frustration, occasional fondness and even pride, eliciting both ire and awe.

Sometimes it feels like a dystopian skyscraper, looming ominously over the cows and roosters of a dairy farm across the road. The tower’s height prompts comparisons with the Tower of Babel, its blinding light with the burning bush. Its base looks like the hangar of a spaceship, its turret the pinnacle of a fantasy fortress. 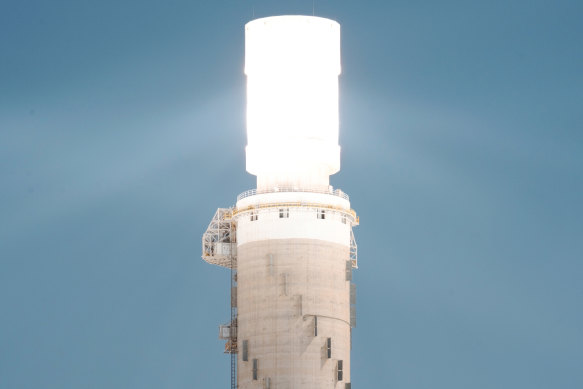 To some, it’s reminiscent of something out of J.R.R. Tolkien’s “The Lord of the Rings.”

“It’s the eye of Sauron,” said Uriya Suued, an engineer who lived in Ashalim until September.

Other times, the tower seems more like a gawky, gentle giant, awkwardly standing on the edge of a group photo. You can even forget it’s there — until you spot it hovering, almost comically, behind a garden wall or incongruously, even apologetically, over the swimmers in the village’s outdoor pool. 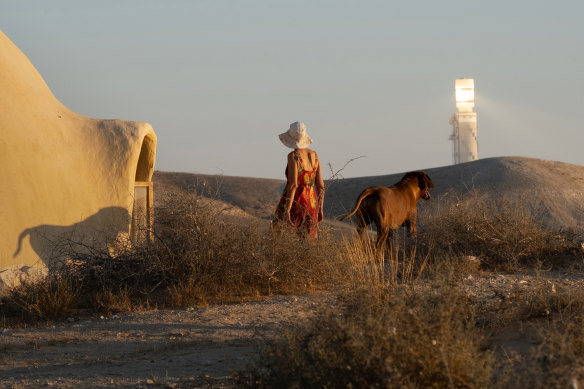 “A lighthouse without the sea,” said Ben Malka, who runs the pool.

Using energy from the sun, the tower generates enough electricity to power tens of thousands of homes. Completed in 2019, the plant showcases both the promise and the missteps of the Israeli solar industry, and it is a case study in the unpredictable challenges that await any country seeking to pivot from fossil fuels to renewable energy.

Idle overnight, the tower starts its day as the nearby roosters start their morning chorus — with the first light of dawn. 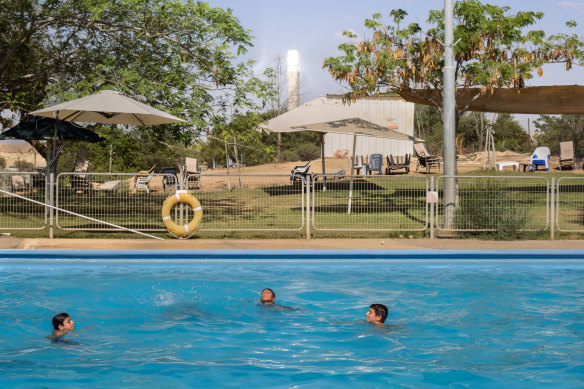 At that moment, the sun’s rays hit a sea of more than 50,000 mirrors positioned strategically in the dunes surrounding the tower. The mirrors reflect the light beams upward, concentrating them on a giant water boiler inside the tower’s turret.

The reflected sunlight, which creates the intense glare that dazzles anyone who looks directly at it, heats the water to more than 540 degrees celsius turning it into steam. In a process known as solar thermal power, the steam is then piped down to ground level, turning turbines to create electricity.

There are more than 25 similar towers across the world, including in China, Spain and the United States — but only one, in the United Arab Emirates, stands taller.

To its champions, the Ashalim tower is a sophisticated, trailblazing endeavour that displays the prowess of Israeli solar energy experts. 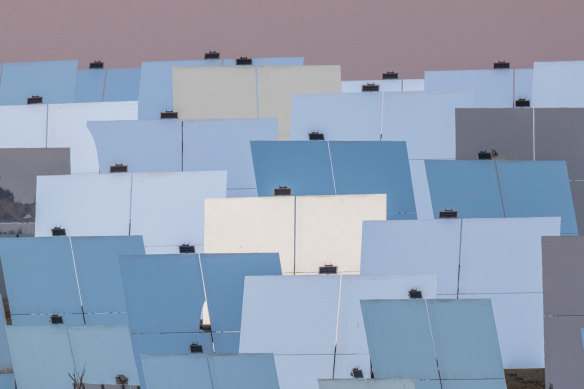 Some of the more than 50,000 mirrors positioned in the dunes surrounding a solar tower in Ashalim, Israel.Credit:Amit Elkayam/The New York Times

“I’m very proud of it,” said Israel Kroizer, an engineer who oversaw the installation and configuration of the 50,000 mirrors. “It’s a very complicated project.”

As part of the undertaking, several million dollars was spent on infrastructure in Ashalim, including roads and a youth club. The money came from Megalim Solar Power, the multinational consortium that built and runs the plant. The project also brought at least 70 new jobs to a remote and sometimes neglected region, lifting its economy, said Doron, the regional mayor.

Founded in the 1970s, Ashalim is a small village with little industry of its own; some residents run guesthouses for tourists, but most work in nearby towns. It’s a Jewish village — thousands of Bedouin Arabs live nearby, but mostly in impoverished towns, some of which are not officially recognised by the government and not connected to the national electricity grid.

During the tower’s construction, rumours abounded in Ashalim about the potential impact. Children feared the turret might explode. Adults wondered if militants in Gaza might target it with rockets. And some needlessly worried that it might cause radiation harmful to residents.

“People thought it would give you cancer,” said Shachar Lebel, a teacher at the Ashalim kindergarten. “People joked that we would grow tails.”

All those fears proved baseless, and some, like Lebel, grew to appreciate the tower. It became a comforting lodestar for some residents as they drove home after long trips away.

But a sense of disgruntlement remained, even among those who otherwise strongly support green energy.

For many villagers, who moved to Ashalim for a flawless desert view, it was a considerable blot on the landscape.

“I’m pro clean energy,” noted Malka, who runs the pool. “But they chose to do it on the road by the village.”

“Maybe they could have taken it 50 miles inside the desert,” he said.

The tower also regularly kills or burns passing birds attracted by the light, villagers said. Similar phenomena have been documented at solar towers in other countries.

In wider Israeli discourse, the tower has attracted particular criticism because its electricity has turned out to be far more costly than that created by other forms of solar power technology.

Under a deal sealed in 2014 between the government and the consortium that built the plant, the companies agreed to pay construction costs of about $800 million. In return, the government promised to buy the tower’s electricity at a rate of about 23 cents per kilowatt-hour, according to the Israeli electricity authority.

That was considered a fair rate at the time of the tender. But during construction, scientists made unexpected improvements to a simpler form of solar power — photovoltaic panels that convert sunlight to electricity without the need for mirrors or water. And those improvements have allowed solar panels to create power for about one-fifth of the cost of a solar-thermal tower, according to data published by the Israeli government.

In fact, solar panels became so profitable that Kroizer, the engineer who helped build the Ashalim site, left the solar thermal industry and now runs a company that focuses on panels.

The Israeli government even considered cutting its losses and abandoning the construction of both the tower and a nearby project that also uses solar thermal technology. But officials backed down because the cost of compensating the contractors would have outweighed the savings.

An Israeli business newspaper, Calcalist, called the situation “one of the saddest stories” in the history of Israeli infrastructure.

Others say the tower’s more expensive energy is, in fact, almost imperceptible to Israeli citizens, since the higher cost is spread across the millions of consumers on the national grid.

For Yosef Abramowitz, a leading Israeli energy entrepreneur, the real problem with the Israeli solar sector is that, at a time of climate crisis, it provides such a small proportion of Israel’s energy needs — less than one-fifth in 2021, according to government records.

“Ashalim is a wonderful example of Israeli climate tech innovation,” said Abramowitz, who has led the installation of large solar fields elsewhere in Israel.

That national debate has little day-to-day relevance for many Ashalim residents. But it has put them on the map, and even made some a little proud.

“Everybody in the country is talking about it,” said Lebel, the teacher. “And I’m, like: I live next to it!”