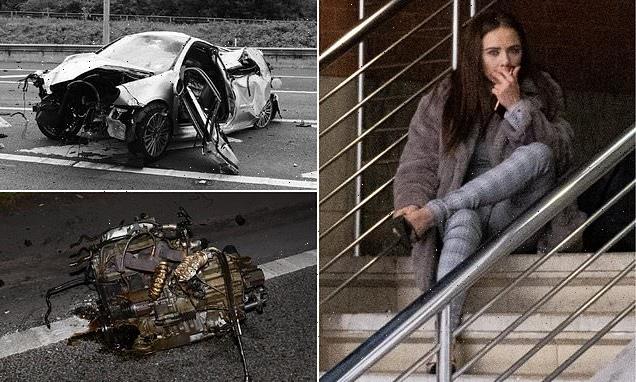 Drug-driving mother-of-three, 27, avoids jail after filming herself on Snapchat speeding at 88mph before M60 crash because her children would be ‘impacted’ if she was behind bars

A stoned mother-of-three who filmed herself on Snapchat speeding along the M60 at 88mph before crashing her VW Golf into a barrier has been spared jail after claiming her children would be ‘impacted’ by her imprisonment.

Crystal Ward, 27, made a series of eight-second videos which showed her speeding down the motorway while blaring loud music on June 11 last year.

Before the Snapchat clips cut off, the father of one of Ward’s children could be heard saying ‘babe’ – and the VW Golf then drove onto the main carriageway.

Ward, from Bradford, then ploughed into a barrier at high-speed, throwing her from the driver’s seat and ripping the engine out of the car.

The mother-of-three’s vehicle flew into the air and hit two lighting columns, leaving the car severely damaged. Another vehicle then smashed into the engine, but they managed to escape with just a punctured tyre.

Ward’s partner was trapped in the passenger sear of the VW Gold when police arrived at the scene near Sale, Greater Manchester.

Tests showed Ward, who suffered spinal injuries in the impact, was four times the drug driving limit for cannabis. She was serving a 40 month ban for a previous drink and drug driving conviction. 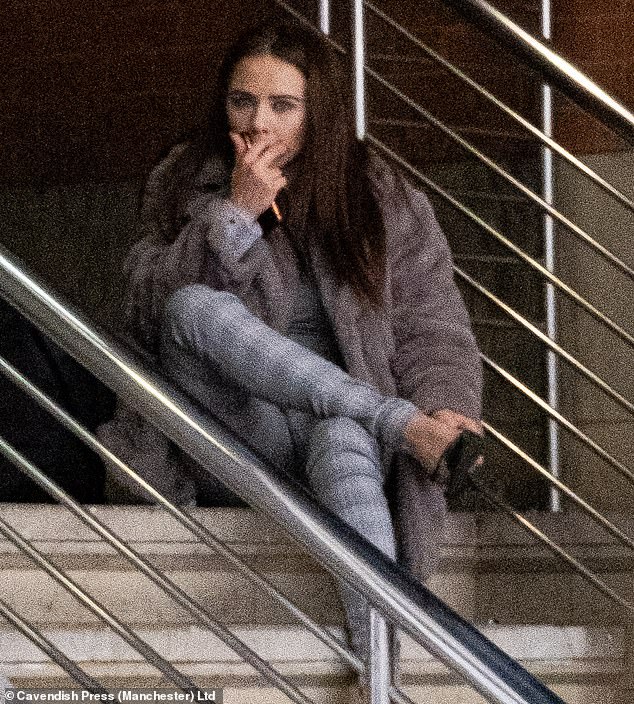 Crystal Ward who was already banned from the roads, made a series of eight-second clips while speeding down the motorway on June 11 last year 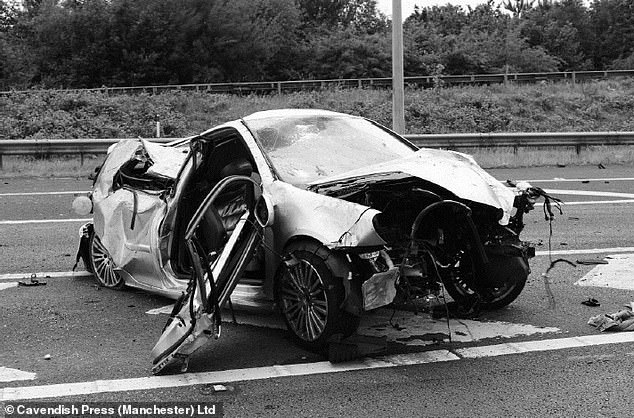 The mother-of-three’s vehicle flew into the air and hit two lighting columns, leaving the car severely damaged. Another vehicle then smashed into the engine, but they managed to escape with just a punctured tyre

At Minshull Street Crown Court, Ward pleaded guilty to drug driving, driving whilst disqualified and having no insurance.

She was given 12 months jail suspended for two years after she wept while pleading that children would be ‘impacted’ if she went to prison. The children are currently in the care of their paternal grandparents.

The crash occurred on entry slipway from junctions 6 and 7 on the M60 as Ward was on a jaunt with Hamzah Ahmed, the father of one of her children.

Prosecuting, Peter Connick said: ‘Whilst she was driving, she was using one hand to hold her mobile phone, recording a video. In the footage, the speedometer shows a speed of 88mph being reached, before the recording cuts off.

‘Shortly before the footage ends, the passenger can be heard to shout ‘babe’ to the Defendant as the speed increases. The final frames show the vehicle entering the cross-hatchings between the off-slip and the entry to the main carriageway.

‘The footage is eight seconds long and ends moments before the collision. The Defendant collided with the bullnose of the Armco crash barrier, which separates the slip road from the main carriageway. 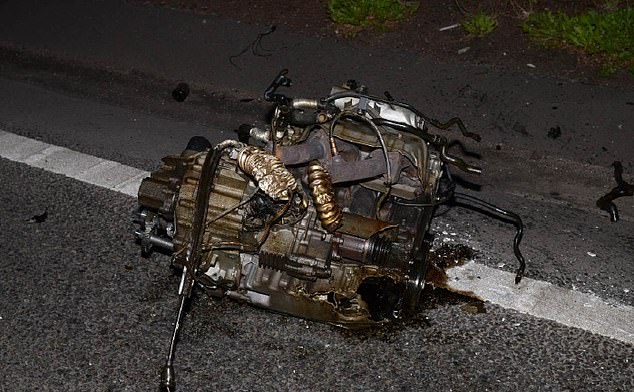 Pictured: the engine on the roadside in the aftermath of the M60 crash

‘The vehicle then becomes airborne and collides with two lighting columns. The defendant was ejected from the vehicle and lands on the grass verge of the road.

‘Due to the immense force of the collision, the engine block of the Golf was ripped from the vehicle, coming to rest in lane 4 of the M60. A motorist then collided with the engine block, puncturing the tyre of the front offside wheel.

‘When the police arrived Mr Ahmed, was still trapped in the passenger seat.. Paramedics handed the officer the defendants phone and at he discovered the footage, which had been captured on Snapchat.

‘Further review of her mobile phone revealed that she had captured multiple videos of her driving, all in eight second clips.

‘She showed a deliberate disregard for the safety of others. She has driven at excess speed, was on a mobile phone and it was a high-speed collision involving herself and others.

‘It’s fortunate there was nothing more than a punctured tyre in regard to the other motorist and there was a serious risk of injury both to herself and her passenger.’

Ward was tested for drugs and gave eight micrograms of a by-product of cannabis per 100 millilitres of blood. The legal limit for Cannabis is 2mg.

She had a string of previous motoring convictions including drink driving in 2018, driving whilst disqualified later that same year, and drink and driving in 2019.

In mitigation, defence counsel Sarah Johnston said her client spent 12 weeks in hospital and was being assessed for PTSD.

Miss Johnston added: ‘She finds it difficult to confront herself and her appalling decision making on this particular occasion. It’s not for the first time, as she has been dealt with on similar types of decision making.

‘She was thrown from the vehicle, suggesting she wasn’t wearing a seat belt and sustained fractures, herself, to the top of her spine, the consequences of which are still ongoing. She still has a significant degree of pain. 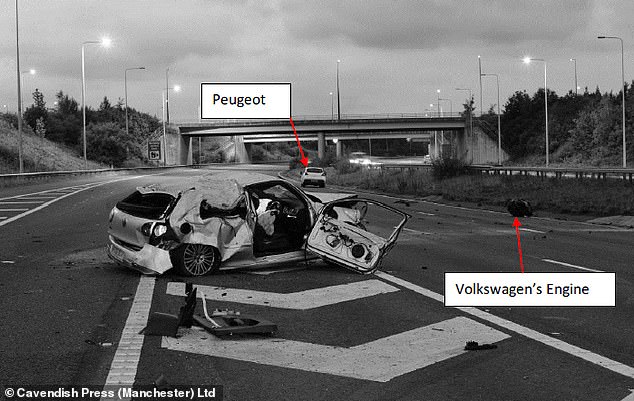 Ward, from Bradford, then ploughed into a barrier at high-speed, throwing her from the driver’s seat and ripping the engine out of the car

‘She requires further surgery for some of the metal plates in the base of her neck to be removed. These are circumstances which can and often do lead to the loss of life.

‘She is a mother of three children. The children are subject to a special guardianship order in favour of their paternal grandparents.

‘There have been ongoing concerns about her vulnerability throughout her life but she still sees her children regularly and is allowed to visit them.

‘The prospect of custody and the impact of that on them weighs heavily upon her. She sees her children four times a month and there is an opportunity to extend the visits.

‘Her passenger does support her and he is the father of her child. He was driving initially and they then stopped. She can’t recall the circumstances in which she came to be driving on that particular occasion.

‘The consequences of that decision making in the past have never been as grave as they are on this occasion. If this defendant hasn’t learnt her lesson from this set of circumstances, then frankly, no one ever would.’

Sentencing, Recorder Jon Close told ward: ‘You are not going to prison today but it was a very, very close thing, You were disqualified and had been for some time, you were under the influence of cannabis and you were four times the drug-driving limit.

‘You were recorded driving at over 80mph. The impact must have been ferocious and it was through good luck that nobody else was seriously injured.

‘Fortunately, the driver of the passing Peugeot wasn’t injured. If he had been, you would have been facing far more serious charges.

‘The only passenger who was injured was yourself and it was a significant and substantial injury that you inflicted upon yourself. You said you want help, and I hope you get it. If not, a jail sentence is waiting for you.’

Ward was also ordered to wear an electronic tag for three months as part of 9pm-7am curfew. She was disqualified from driving for another five years and ordered to take an extended re-test.