THIS is the dramatic moment cops Taser a man in front of his screaming child at a petrol station.

The incident, which happened on Wednesday night, saw Desmond Ziggy Mombeyarara, 34, fall to the ground before his son was carried away by police. 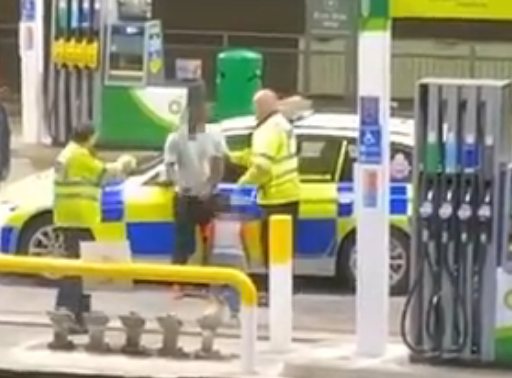 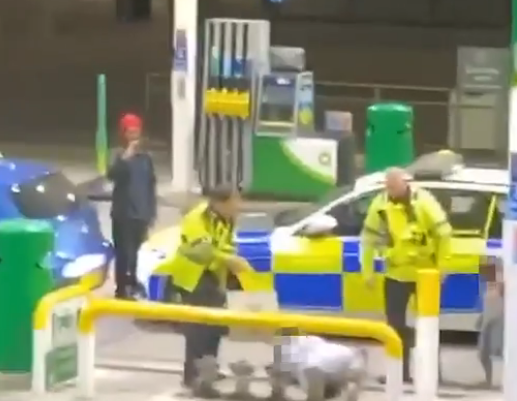 A stunned eyewitness, who filmed the incident in Stretford, Greater Manchester, blasted the use of “unnecessary force” against him.

Manchester Mayor Andy Burnham said he was "concerned" by the clip and cops have referred themselves to the Independent Office For Police Conduct.

As the clip begins, two officers can be seen trying to restrain Mombeyarara while his son wails in the background.

One officer shouts “Release your hands” as the dad clings on to his child.

The woman filming exclaims: “Oh my god, he’s got a child.”

The officers continue to clash with the man who swings his arms up out of their grasp.

One of the officers tells him: “You’re the one that’s causing the problem.”

They continue to argue when suddenly one of the officers instructs the others: “Taser him.”

There is a bang as the Taser is released and Mombeyarara falls to the ground as his son lets out a blood curdling scream, shouting “Daddy”.

The child becomes even more distressed and the woman filming can be heard muttering: “Oh my god” repeatedly.

As the clip ends, the youngster is carried off by one of the officers and the cop continues shouting at the immobilised man.

The unnerving moment was caught on camera by local eyewitness Dionne Allman, 19.

She shared the video on Facebook yesterday, calling the police’s actions “disgusting and appalling.”

She added: “After this video was taken I continued to film and the police officer continued to Taser the man several consecutive times whilst his son was still witnessing this all happen.

“I don’t know what the man did or was accused of, but the level of force used on him with the inappropriate procedures was incredibly difficult to watch.

“At times like this, institutes like the police need to be people that we can rely on for protection in every sense of the word and I personally think that the last thing they did was protect this child’s mental well being.”

Mombeyara, from Old Trafford, was arrested and charged with two counts of resisting a constable in the execution of their duty.

He has been remanded in custody and will appear before Manchester Magistrates' Court later today.

Superintendent Mark Kenny said: 'We are aware of public concern regarding this arrest and I want to reassure the public that this matter is being reviewed and treated seriously. In addition we have voluntarily referred this matter to the IOPC.'

Mayor of Manchester Andy Burnham said: "On Friday morning a video was brought to my attention of a police incident at a petrol station in Greater Manchester involving two police officers, a man, a child and the use of a taser.

"From what I have been told, it would appear that the officers were right to apprehend the individual who was putting his child and others at risk by his actions.

"He has subsequently been charged. But it is not at all clear that the level of force used in this instance, particularly in front of a child, was proportionate or justified and that is why I have asked for an urgent independent review to be carried out." 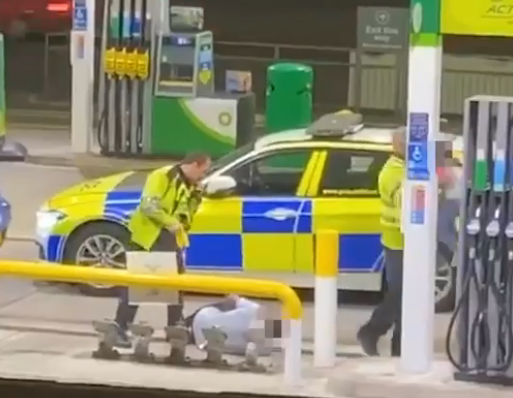 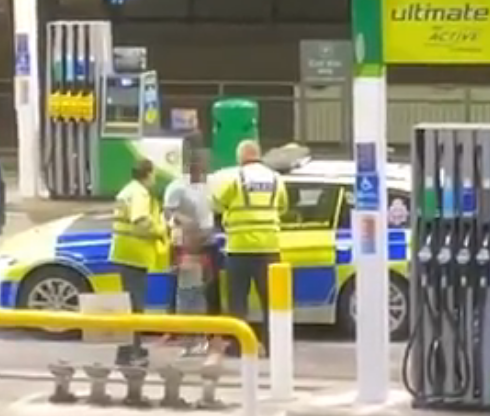