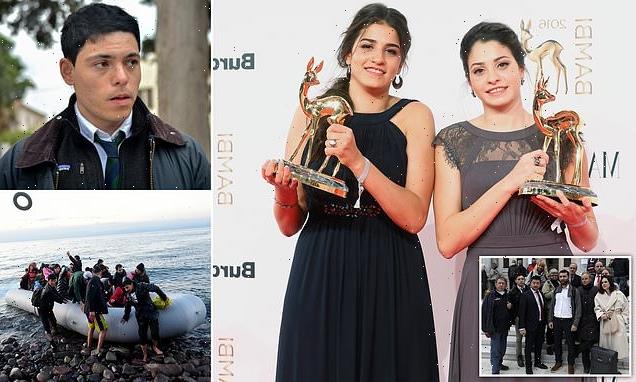 A group of 24 aid workers, including the sister of a Syrian Olympic swimmer, are facing a migrant smuggling trial in Greece after taking part in migrant rescue operations.

The volunteers, who are accused of espionage, using fake military licence plates and monitoring the radios of the Greek Coast Guard, allegedly helped migrants reach Lesbos after crossing the Aegean Sea.

They also face more serious felony charges, which are still being investigated, of people smuggling, belonging to a criminal group and money laundering, which carry 25-year prison sentences.

The aid workers face eight years in prison for their alleged affiliation with the Emergency Response Center International (ECRI), a nonprofit search-and-rescue group that operated on the Greek island between 2016 and 2018.

Among the 24 defendants, 17 of whom are foreign nationals, is the Syrian-born competitive swimmer Sarah Mardini, whose sister Yusra Mardini, was part of the refugee swimming team at the Olympic Games in Rio de Janeiro in 2016 and Tokyo earlier this year.

The siblings shot to fame in 2015 after the Syrian refugees took an overcrowded dinghy to Greece and saved the other 19 passengers by pulling their sinking boat to shore for four hours when the engine failed. 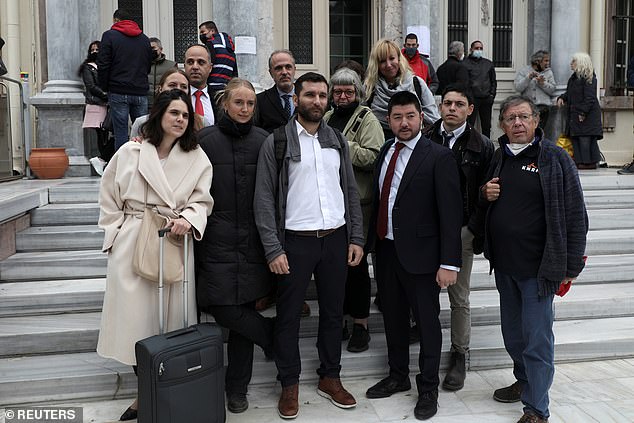 A group of 24 aid workers, including the sister of a Syrian Olympic swimmer, are facing a migrant smuggling trial in Greece after taking part in migrant rescue operations. Pictured: The aid workers who stand trial with their lawyers, family and supporters outside the court on the Greek island of Lesbos today 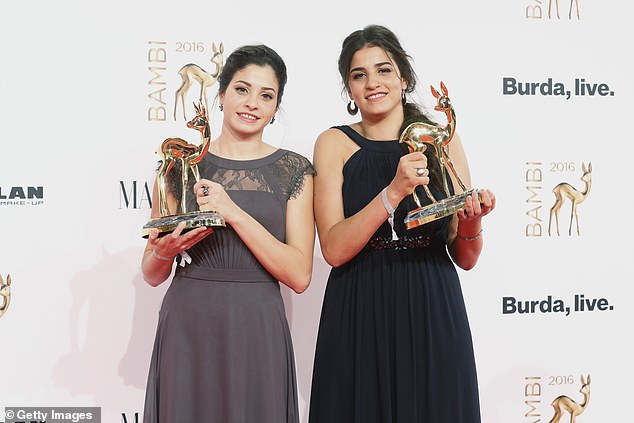 Among the 24 defendants, 17 of whom are foreign nationals, is the Syrian-born competitive swimmer Sarah Mardini (right), whose sister Yusra Mardini, (left) was part of the refugee swimming team at the Olympic Games in Rio de Janeiro in 2016 and Tokyo earlier this year 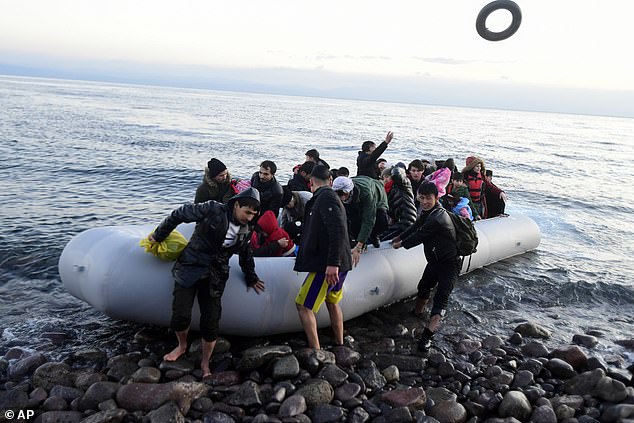 Migrants arrive at the village of Skala Sikaminias, on the Greek island of Lesbos in 2020

Prosecutors allege that the aid workers monitored the Greek Coast Guard’s radio channels and used a vehicle with a fake military licence plate to enter restricted areas in Lesbos before rescuing migrants.

The 24 defendants deny any wrongdoing, maintaining that they simply wanted to help save lives when the island of Lesbos was overwhelmed by refugee and migrant arrivals from nearby Turkey.

But in a case which has been decried as ‘farcical’ and ‘politically motivated’, the court today ruled that it was not competent to judge the case and adjourned the trial, defence lawyer Haris Petsikos said.

The case was moved to an appeals court as a lawyer is among those accused, Petsikos added.

No date was given for the new trial.

Irish-born Sean Binder, who is now a German citizen, and Mardini have previously spent more than three months in police custody and face five-year jail terms if convicted.

Speaking about the adjournment of the trial, rescue diver Binder, 27, told reporters: ‘I feel very angry because we have to wait years more.’

‘There’s no semblance of a fair trial,’ he added, charging that the legal limbo was blocking independent rescue efforts and costing lives at sea. 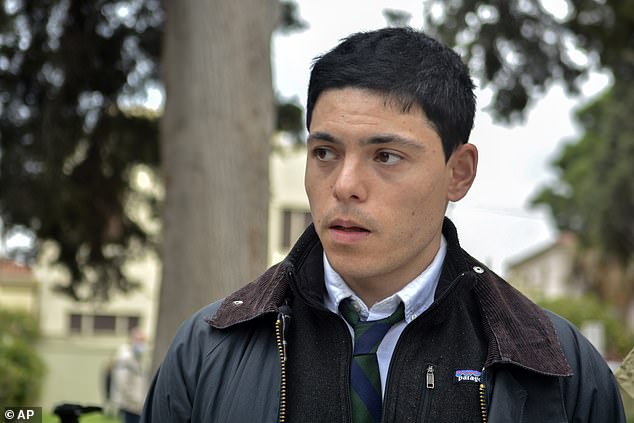 Irish-born Sean Binder (pictured outside court today), who is now a German citizen, and Mardini have previously spent more than three months in police custody and face five-year jail terms if convicted 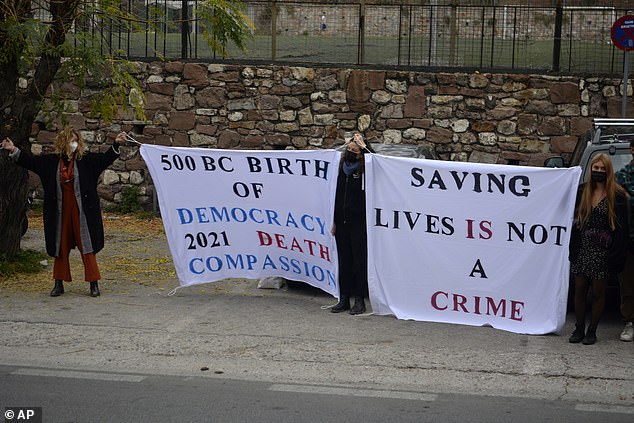 Mardini and Binder – who were conditionally released in December 2018 and immediately left Greece – are also in line for a related felony investigation which will be tried separately and which carries a maximum penalty of 25 years in prison.

Binder has returned to Greece for the trial despite his misgivings about the trial.

‘I never for a moment thought that trying to help somebody out at sea would land you in prison,’ Binder told Reuters in Athens. ‘I’m terrified of going back to prison.’

He said he had been handcuffed in prison to a man who had committed double homicide by burning someone alive.

Mardini, who now lives in Berlin, is barred from entering the country as a third country national and will be represented by a lawyer.

‘It’s mind boggling why someone cannot attend their own trial,’ said Giorgos Kosmopoulos, a senior campaigner for Amnesty, calling on authorities to drop the charges during a solidarity protest outside Greek parliament.

Binder, a rescue diver, said he had only intended to volunteer for a while.

‘It wasn’t my plan to spend the rest of my life doing this, to be some kind of champion,’ he said.

‘If you saw someone drowning you would do the same as me, you would reach out a hand, pull them out, and that’s the exact same crime that I’m accused of doing.’ 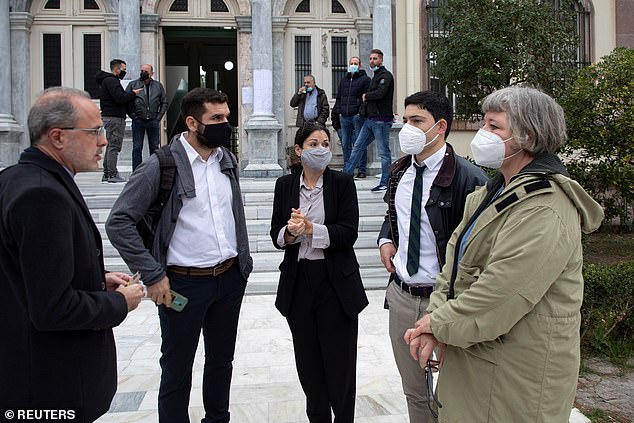 Rights groups such as Amnesty International and Human Rights Watch say the trial is intended to intimidate other aid workers from carrying out their work and have called the charges ‘farcical’ and ‘politically motivated.’

Amnesty International’s European director Nils Muiznieks said in a statement before the trial: ‘This emblematic case demonstrates how far the Greek authorities will go to deter people from helping refugees and migrants.

‘The charges perversely misrepresent the group’s search-and-rescue operations as a smuggling crime ring,’ Human Rights Watch said in a statement ahead of the trial.

Greek prosecutors liken ERCI search-and-rescue operations to a smuggling crime ring and are investigating its fundraising for potential money laundering.

ERCI was registered as a non-governmental organisation and regularly cooperated with Greek authorities on rescue missions.

The arrests forced the group to cease operations, which included providing medical care and informal education to migrants and asylum seekers.

The European Parliament called it ‘the largest case of criminalization of solidarity in Europe’ in a report in June.

More than a million migrants and refugees, many escaping war in Iraq and Syria, traveled to Lesbos and other Greek islands from Turkey in 2015-16, with most moving on to Germany and other European Union countries.

The Greek government has taken a tougher line with illegal and irregular migration in recent years, intercepting boats at sea and extending a steel wall along its land border with Turkey. It denies frequent allegations by migrant advocacy groups that it carries out summary deportations, also known as pushbacks.

Twenty-four people have drowned so far in 2021 in the eastern Mediterranean trying to enter Europe, including four children and a woman, HRW said.