A group of pupils reportedly set a bus on fire after allegedly turning their hair spray cans into ‘flamethrowers.’

The single-decker vehicle was pictured with huge flames and smoke pouring from the roof at around 3:45pm in Shepherdswell, near Dover, Kent, yesterday.

It was reported the blaze was started by schoolchildren who set hair spray or hand sanitiser on fire. 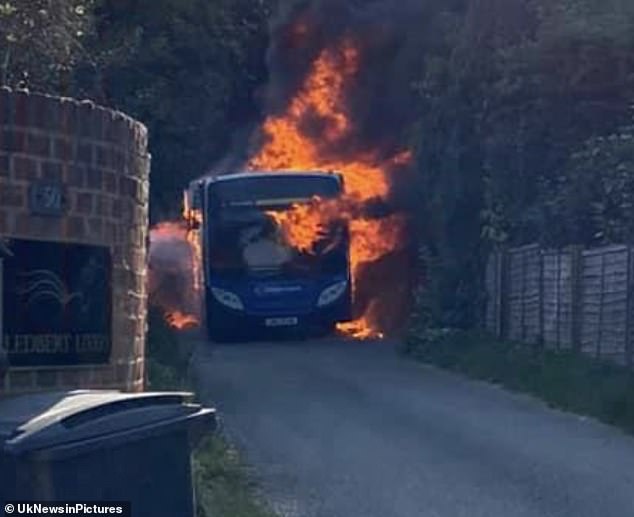 The single-deck vehicle is pictured with huge flames smoke pouring from the roof at around 3:45pm in Shepherdswell, near Dover, Kent, today 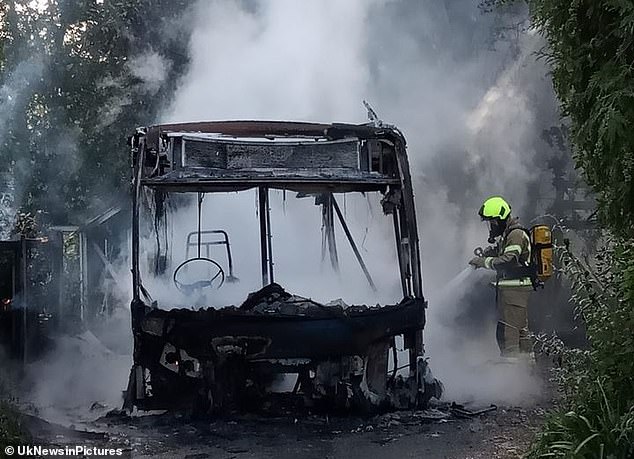 The driver was understood to be alert to the incident and managed to evacuated everyone from the bus before it went up in flames.

Pictures from the scene show the bus at a standstill while flames douse the turquoise vehicle along a quiet residential street.

Firefighters could be seen attending to the blaze and putting the fire out.

The images show the bus has been completely burnt out with only the steering wheel and driver’s chair still visible.

Despite the severity of the fire there were not thought to be any injuries from the incident.

Social media users reacted with dismay at the blaze, but praised the driver for his quick-thinking to get the schoolchildren off the bus.

One person described the bus driver as a ‘legend’, while another described him as the ‘hero of the day.’

It is not clear which school the pupils are from, or if police are investigating the incident.