Evidence collected by two documentary filmmakers is challenging the official explanation of how 852 people died in the 1994 sinking of a ferry in the Baltic Sea, one of Europe's greatest maritime disasters.

The oceangoing passenger and car ferry, the Estonia, was en route from the Estonian capital, Tallinn, to Stockholm when it was stricken and sunk rapidly in stormy seas. An official investigation found that its bow door had been ripped off by the heavy seas, flooding the car deck. The ship went down in less than an hour, with only 137 survivors. 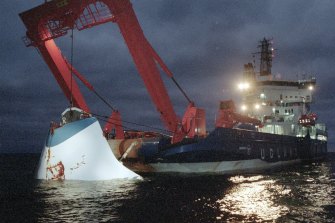 The bow door of the sunken passenger ferry Estonia is lifted up from the bottom of the sea, in 1994.Credit:AP

A subsequent investigation in 2008 said that the ship had been travelling too fast in the surging waters and that the crew, while trying to save the ship, made the critical mistake of turning it and causing it to capsize.

But the five-episode documentary, which started streaming online in Scandinavia and Finland on Monday, draws a different and far darker conclusion: The filmmakers found a previously unrecorded gash in the hull of the ship about 13 feet long and 4 feet wide.

The conclusion of experts cited in the documentary was that the ferry had been struck by what was probably a slowly moving but extremely heavy object, causing it to sink.

In a joint statement released on Monday, the governments of Estonia, Finland and Sweden said they would investigate the claim, which comes after years of complaints by families of the victims and survivors over the lack of a proper inquiry. 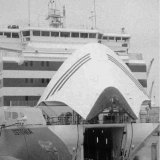 The Estonia, pictured in February 1994, with its cargo door open.Credit:AP

After the tragedy, the decision was made not to salvage the Estonia and give the victims a land burial, but instead to leave the ship on the seabed with the bodies interred inside. Swedish authorities then planned to entomb the ferry in an underwater mausoleum by covering the wreck in a 30-centimetre layer of concrete, but the plan was abandoned after families of the victims objected.

Instead, the area where the ship lies about 80 metres beneath the waves was declared a sea grave, which prohibited further exploration of the wreckage. Violators of that order risk a two-year prison term.

For Henrik Evertsson and Bendik Mondal, the two leaders of the team that made the Discovery Networks documentary, that presented a problem.

After interviewing survivors and collecting evidence for the documentary, Estonia: The Find That Changes Everything, they say they found several serious inconsistencies in the official investigation.

"The first thing that really hit us was the fact that, in the final official report, the surviving witnesses had not been interviewed thoroughly," Evertsson, who is from Sweden, said in a telephone interview.

After piecing things together, a different scenario emerged, he said. "Everything started with a big bang, not one that you hear, but one that everyone felt."

In the documentary, a Norwegian maritime expert concluded that the Estonia had been hit by an object with a mass of 1000 to 5000 tons, moving at a relatively low speed, about 3 to 10 kilometres an hour. "It can also be that it weighed less and travelled faster," Evertsson said. "It created heavy damage."

Well aware of the penalty they might face, Evertsson and Mondal decided to go ahead and use a remotely operated underwater camera to map out the entire hull of the ship.

"We felt as journalists that we were obliged to see if there was a hole in the ship, after researching and hearing all witness accounts and taking into account the speed the Estonia went down with," Evertsson said.

They decided not to enter the vessel to avoid disturbing any remains. "But we methodically scanned the hull of the ship," Evertsson said. "At some point, on the starboard side, the hull just suddenly ended, and there was a massive gap."

"There was a long and relatively narrow hole compared to the length," he continued, "with one piece of cracked steel pushed inwards into the ship and another part bending out."

Another expert interviewed in the documentary said that were no indications of an explosion, a theory that was offered after it was reported that the ferry had been carrying military equipment.

One survivor, Carl Eric Reintamm, said that he had seen a large white object in the water next to the ferry, testimony that experts interviewed for the show said had not been taken into account before.

The documentary makers did not speculate further about what the object may have been, leaving that for future, official investigations. But they have succeeded in raising strong doubts.

"I believe the truth is something other than what people have been told until now," Reintamm said.