The person most likely to own Twitter next month has proposed solving the war in Ukraine by letting Russia keep territory, won praise from a top Chinese diplomat for suggesting China take control of Taiwan, and welcomed a widely followed celebrity back to Twitter who had just had his Instagram account suspended for threatening Jews – all within the past week.

Billionaire industrialist Elon Musk’s moves have heightened alarm about what he will do with Twitter, which he has faulted for being too restrictive about legal but false or hateful speech. 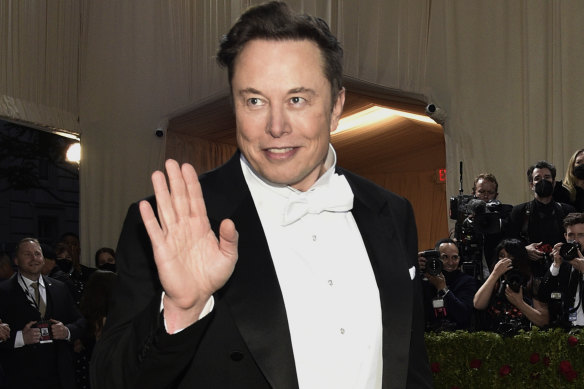 Since autocrats already use the platform to spread lies about opponents and whip up violence and mayhem, Musk’s pursuit of approval from two of the most powerful is especially unnerving.

“It’s a very good illustration as to why it would be a disaster if Musk does come to own Twitter,” said Paul Barrett, deputy director of New York University’s Stern Centre for Business and Human Rights. “You could have provocations, whether engineered by Musk himself or by others, that could have global implications.”

The latest scrutiny came on Tuesday, when prominent geopolitical analyst Ian Bremmer said Musk had been speaking with Russian President Vladimir Putin before tweeting out a three-point plan for Ukraine that would leave Crimea, taken by force in 2014, in Russia’s hands.

“I spoke with Elon two weeks ago, and he told me Putin (in a direct conversation with him) was `prepared to negotiate’ . . . and had outlined the minimum the Russian president would require to end the war,” Bremmer wrote to newsletter subscribers.

As word spread on a second day of intensive Russian attacks on civilian population centres in Ukraine, law professors speculated on whether Musk should have registered as a foreign agent.

“Logan Act” became one of Twitter’s trending topics in the country, referring to the 250-year-old law that bars private citizens from conducting foreign policy.

Only then did Musk deny speaking to Putin, since a conversation a year and a half ago about space issues.

Bremmer, a Time magazine columnist and author as a well as head of the Eurasia Group consultancy, stood by his account, tweeting that “Elon Musk told me he had spoken with Putin and the Kremlin directly about Ukraine. He also told me what the Kremlin’s red lines were.”

Four days prior, Musk said in a Twitter conversation that he was in touch with “quite a few” parties in the war.

The argument over whether Bremmer was mistaken, Musk had been exaggerating, or Musk was backtracking from the truth failed to obscure two deeper points Bremmer made in his newsletter:

First, given opposition to aiding Ukraine among some Republicans, Musk’s Twitter takeover and the likely reinstatement there of former president Donald Trump and some of his allies would spread opposition further and divide the country, threatening Ukraine’s backup.

Second, Musk’s acquisition would pit his new, free-speech business against his old businesses – SpaceX, which relies on the Pentagon and NASA, and Tesla, which relies on China for scarce physical resources.

“Each of these three are huge bets on completely different futures for a technopolar world. They’re also the most geopolitically opposed business models I’ve ever seen a single person pursue. Or maybe it’s the world’s biggest hedge,” Bremmer wrote.

Bret Schafer, a senior fellow at the German Marshall Fund’s Alliance for Securing Democracy, said Musk’s communications with Chinese and Russian officials and business interests abroad will create unprecedented dilemmas if he closes his deal to buy Twitter.

“Most owners of these platforms have had to remain neutral on issues related to politics and geopolitics,” Schafer said. “His freewheeling style of communicating with authoritarians is certainly going to create challenges with how the platform is perceived.”

Though Musk has said he will rid Twitter of automated bots, Schafer said there has been little clarity around how Musk would respond to other types of foreign influence operations. He said it is unclear how Musk would handle a Russian hack and leak operation, such as occurred in the run-up to the 2016 presidential election, or whether Chinese government officials should be allowed to join the platform that citizens cannot access.

In recent years, major social media companies “have taken a stand on the side of democracy over autocracy,” Schafer said. “It will be interesting to see what direction that shifts in if and when Musk takes over.”

What worries many about Twitter is that the lion’s share of Musk’s wealth is his stake in Tesla, so that in any conflict among world views, the platform would be most likely to suffer.

Tesla had record sales of its vehicles in China in September, even as its competition with local electric vehicle makers intensifies.

After Musk’s Ukraine tweet a week ago, a commentator for the Chinese Communist Party’s Global Times cited it and wrote to a half-million Twitter followers that Musk “believes too much in the US and West’s ‘freedom of speech.’ He will be taught a lesson.”

Within days, Musk opined in a Financial Times interview that Taiwan should be governed like Hong Kong, winning praise from China’s ambassador to Washington: “I would like to thank @elonmusk for his call for peace across the Taiwan Strait and his idea about establishing a special administrative zone for Taiwan.”

Barrett and others said that they were not afraid of Musk bringing Twitter to China and back into Russia, saying that could help citizens communicate more.

Instead, they fret that a Twitter without much moderation would allow propagandists for those governments to wreak more havoc than they already do.

“Elon Musk is entitled to his opinions and speech, but let’s just say Freedom House would welcome the opportunity to brief him more thoroughly on the egregious human rights violations in Russia, China and elsewhere in the world before he takes ownership of one of the largest tech platforms,” said Michael Abramowitz, president of nonprofit Freedom House, which tracks rights globally.

“Ukrainians are fighting to protect their fundamental freedoms. Taiwan is a democracy where people enjoy those freedoms every day, and they know the threat they are facing from the PRC. We believe that all democracies and democracy-supporting businesses should support and defend these freedoms globally.”

Accountable Tech, a left-leaning group that has advocated for regulation of tech giants, sent a letter last week to congressional leaders that called for an investigation into Musk’s relationships with foreign actors. The letter says Congress should use its subpoena powers to determine whether Musk is in communication with senior officials at the Kremlin or in China “who could use this acquisition to undermine American national security interests.”

“It is critical that Congress immediately investigate the national security implications of this acquisition and take steps, as necessary, to protect American democracy and independence,” the group’s leaders, Nicole Gill and Jesse Lehrich, wrote.