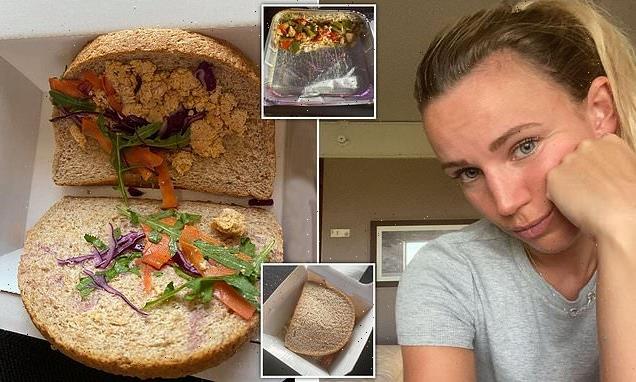 Dental nurse, 31, says she is being treated ‘like a criminal’ and forced to eat child-sized ‘awful’ meals in her £1,750 10-day enforced hotel quarantine after flying back from Dubai

A frustrated dental nurse holed up in a Covid quarantine hotel says she is being treated ‘like a criminal’ with ‘awful’ meals that ‘wouldn’t fill up a child’.

Claire Curtis, 31, has been locked-up in the Sandman Signature Hotel at Gatwick Airport after being placed into a Government mandated 10-day quarantine on her return from Dubai.

The dental nurse, who was in the emirate visiting family, has forked out the set price of £1,750 for the stay at the airport hotel, which is normally rated four-stars.

But, according to the Hull Daily Mail, Ms Curtis is now having to splash out even more money on expensive takeaways because she is sick of the ‘awful’ meal options at the hotel.

She says the breakfast options involve either Coco Pops, a fried egg sandwich or a sausage roll, with a typical lunch being a sandwich.

And she says dinner is either a small portion of lasagne, burger and chips, or chicken tikka.

Claire, from Market Weighton, Yorkshire, said one of her big concerns was the ‘lack of fruit and vegetables’.

She told the Hull Daily Mail: ‘There’s absolutely nothing healthy – I have no idea what would happen if you were diabetic or had a restricted diet. 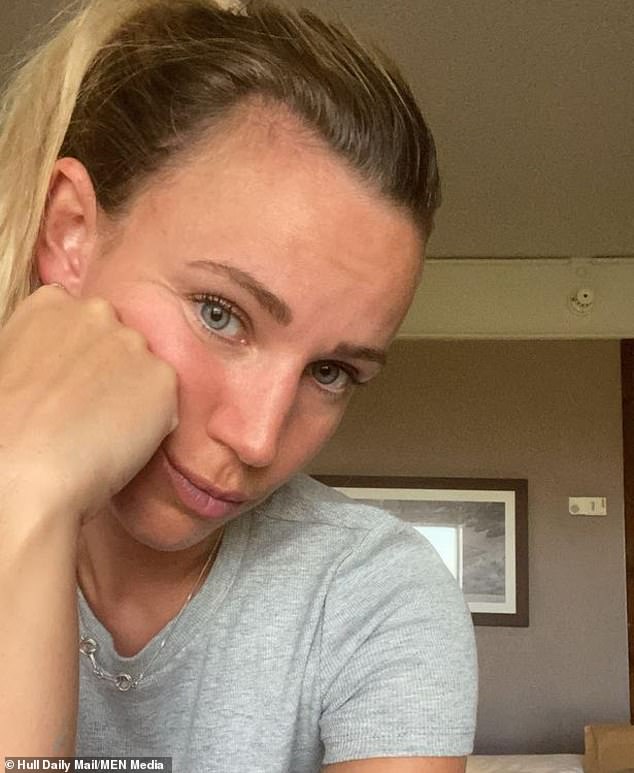 Claire Curtis (pictured), 31, has been locked-up in the Sandman Signature Hotel at Gatwick Airport after being placed into a Government mandated 10-day quarantine on her return from Dubai 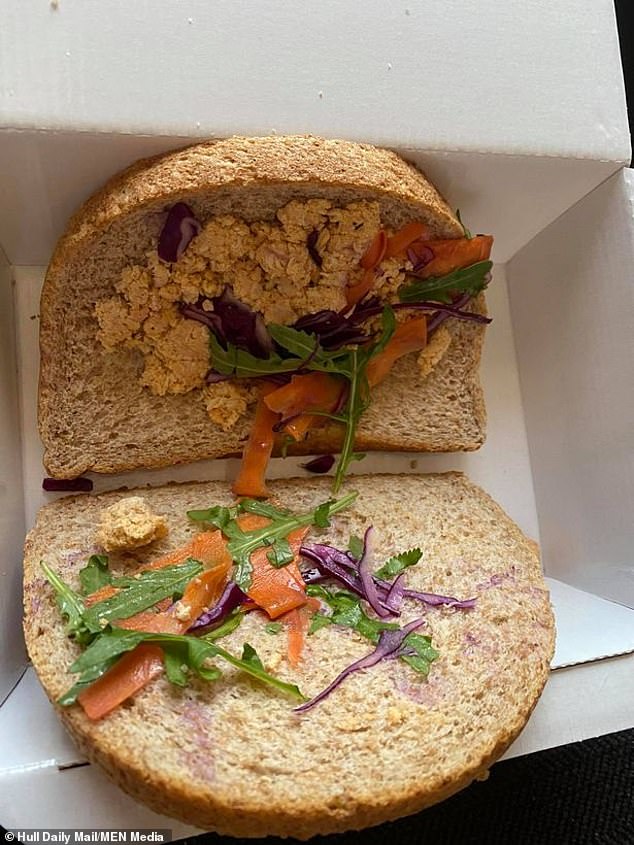 Claire says the breakfast options involve either Coco Pops, a fried egg sandwich (pictured) or a sausage roll, with a typical lunch being a sandwich

‘I have had Coco Pops for breakfast every day as I don’t want fried food.

She added: ‘The portions are so small, they’re child-sized.’

Claire, who works at a dental surgery in East Riding, said she gets a 15-minute walk once a day, with staff sent to assist her.

And she says her view out of the window is a car park full of bin bags and piles of rubbish.

She said: ‘I feel like I am in a prison – except prisoners probably have it nicer.’

Claire is due be allowed home on Saturday and says she ‘can’t wait’ to leave the hotel.

MailOnline has contacted Sandman Signature Group for a comment.

A spokesperson told the Hull Daily Mail that the food and drinks provided are ‘of a high quality with care being taken to provide balanced meals’ and that it was providing a range of options including vegetarian, vegan and halal meals. 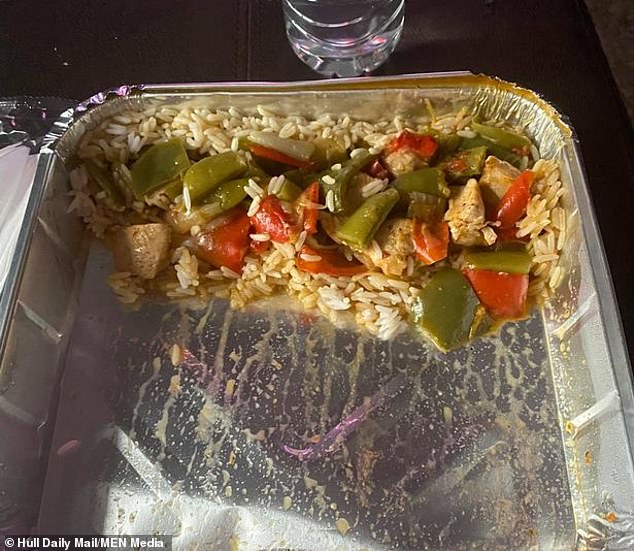 Claire says dinner is either a small portion of lasagne, burger and chips, or chicken tikka 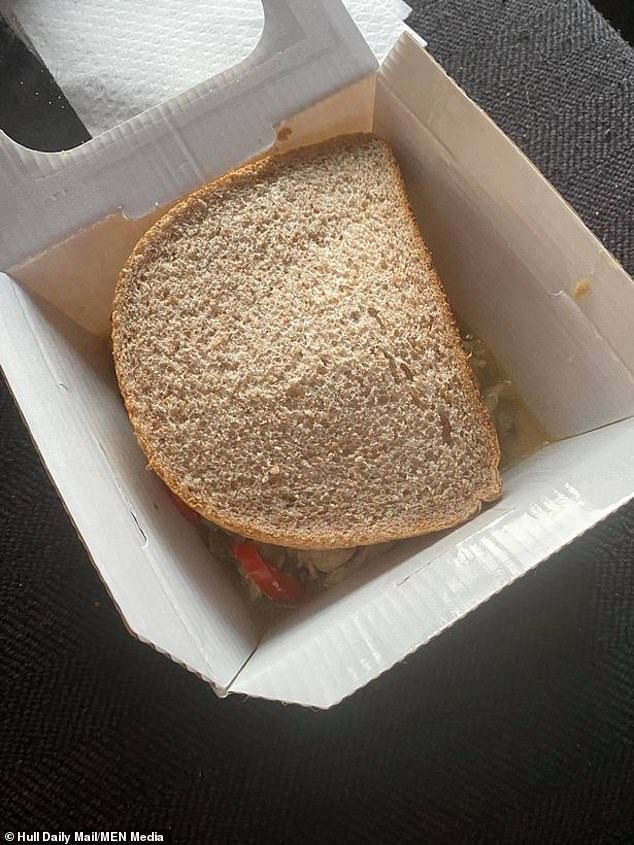 Claire, who works at a dental surgery in East Riding, said she gets a 15-minute walk once a day, with staff sent to assist her. Pictured: Claire says typical lunch is a sandwich (pictured: One of the sandwiches provided at the hotel)

Meanwhile, a spokesperson for the Department of Health, who have commissioned the quarantine scheme, said it could not comment on individual cases.

But in a statement on the wider scheme, a spokesperson said: ‘Our top priority has always been protecting the public and the robust border regime we introduced is helping minimise the number of new variants imported into the UK.

‘The government continues to ensure every person in quarantine gets the support they need and all hotels providing facilities are accommodating the vast majority of people’s requirements.

‘Hotels do their utmost to take any necessary steps to address concerns raised by guests.’

Since February 15, travelers returning home to the UK after visiting one red-listed countries have been forced to quarantine in a hotel for 10 days at a cost of £1,750 each.

The fee covers the cost of the hotel, food, security, secure transport to the hotel from the airport and the cost of cleaning.

Guests do not get to choose which hotel they stay in and are assigned a space based on where they land and which participating hotels are available. 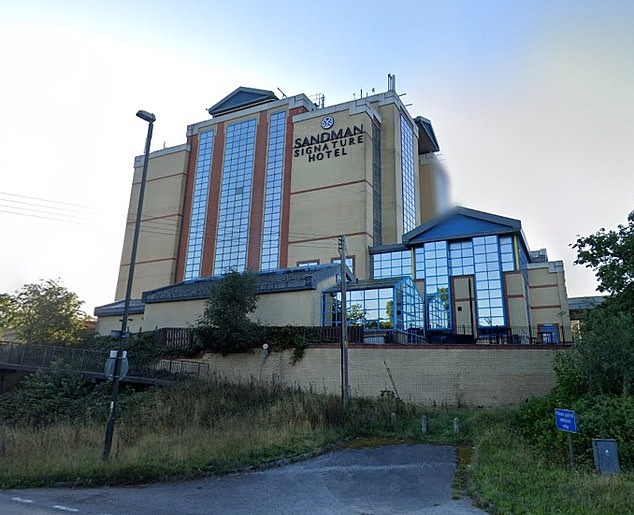 The dental nurse  forked out the set price of £1,750 for the stay at the four-star Sandman Signature Hotel at Gatwick (pictured). Those in need of quarantine do not pick the hotels they stay at

The spaces are saved for those returning from red-list countries – those considered high risk.

The quarantine scheme, ministers hope, will prevent people from bringing mutated variants of the coronavirus into the UK.

The Government has banned visitors from travelling into the UK from red-list countries, which include Portugal, Brazil and South Africa, but not people who have residency visas or British citizenship.

The policy was criticised at the outset by travellers themselves, who have to stump up the cost, and by critics who said it would be too difficult to enforce or ineffective.

It is not clear how many travellers are actually using the quarantine hotels, and the Department of Health has refused to reveal how many of them have tested positive.

The Department of Health said data counting the number of people carrying Covid when they arrived in the UK is not publicly available.