While doing year 12 last year, Matt Boyte received a letter from a stranger.

“Dear School Leaver,” it said in flowery cursive font. “What would I write if I could have the opportunity to teach my younger self … from the experience … I have acquired over the years?”

The world ahead of him had many ways of viewing success, the letter said, other than simply academic achievement. 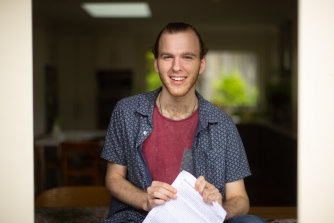 Matt Boyte received an encouraging letter from a stranger when he was in Year 12 last year. This year he wrote his own letter to a Year 12 student, sharing his wisdom.Credit:Simon Schluter

“If you don’t think you will get the score you are hoping for, or needing … remember there are usually other ways that can get you back on the same or a similar track. You may even find in the future that by doing something different from what you had imagined … you discover some even more exciting opportunities.”

The stranger’s biggest life lesson? “There is never any shame in telling people you are struggling or need help.”

The two-page letter finished with a quote commonly attributed to Buddha: “The mind is everything. What you think, you become.”

The letter came at the end of a tough final school year for the Templestowe College student. Mr Boyte’s mental health had tanked during lockdown and he struggled to stay motivated. “I lost a lot of connection with people because I wasn’t seeing them every day.” 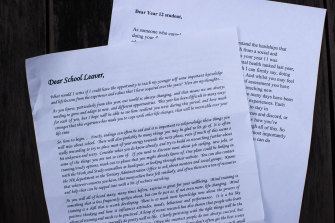 Year 12s received letters from strangers as part of a Kindness Pandemic project.

One of his subjects was drama and it was weird rehearsing online. “It was hard to get a sense of whether people were engaged because there was this wall between you.”

Mr Boyte says the letter arrived during exams and, although distracted, he read it several times. “Obviously someone had put a lot of effort into asking ‘what would I say to myself in year 12?’ It was cool to see that people cared and could see what was happening.”

The anonymous letter was one of 1700 written to year 12 students from schools in Melbourne’s north-eastern suburbs as part of #Year12Together, an initiative of the Help 3095 and Surrounds Facebook page.

While last year the Eltham group had several projects, including hero packages for essential workers and personalised care packages for local year 12s, group creator Patricia Callinan said it was the letter-writing campaign they continued with this year. 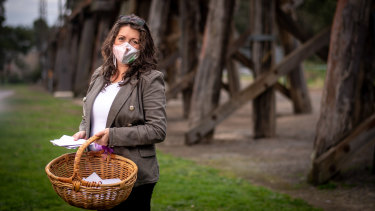 “Receiving letters is something that people don’t do anymore – it’s a lost art,” she said.

The campaign was in part inspired by watching one of her own sons struggle with his mental health while doing year 12 in lockdown last year.

“He actually ended up not getting the final ATAR he wanted,” Ms Callinan said.

However, after a year working as a furniture removalist and bartender (when lockdown permitted) her son had just applied to study nursing at Swinburne.

“Wait a few years and an ATAR means nothing,” Ms Callinan says. “My biggest concern is their mental health and this year’s kids have been through it for two years – they have done virtually their entire VCE in lockdown.”

One quoted Jedi master Yoda, the source of much of the wisdom in the Star Wars galaxy: “The greatest teacher, failure is”. Another referenced novelist Matt Haig, who at 24 wanted to kill himself and now teaches readers of his books how to keep going when the future looks bleak. All conveyed, in their own voices, ‘year 12s, you’ve got this’.

This year, Mr Boyte was among those who wrote a letter to a stranger.

“As someone who completed year 12 last year, I understand the hardships your final year during lockdown can entail,” he wrote.

Year 12s had discovered new ways to stay in touch, Mr Boyte wrote, whether it was through online games and chat app Discord, or calling each other and watching Netflix together.

“It goes to show how your creativity and mental effort are continuing to flourish even through all this,” he wrote. “So don’t give up …. The light at the end of the tunnel is so close.”