A DAD suffering with a watery eye for six months was horrified after it turned out to be facial cancer.

Graeme Heward, from Lymm, Cheshire, has been left with a hole in his face after doctors had to remove his right eye and part of his nose to tackle the tumour. 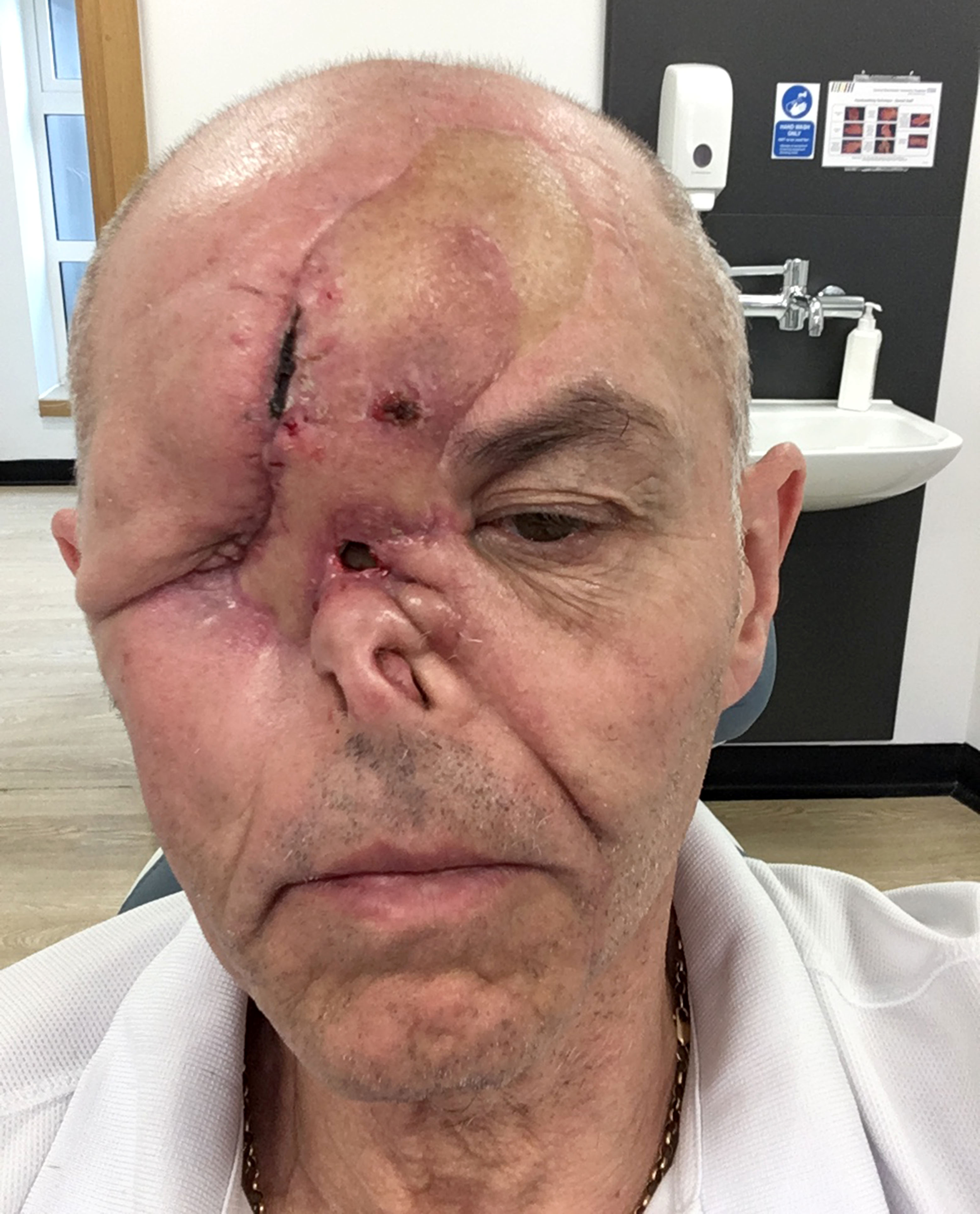 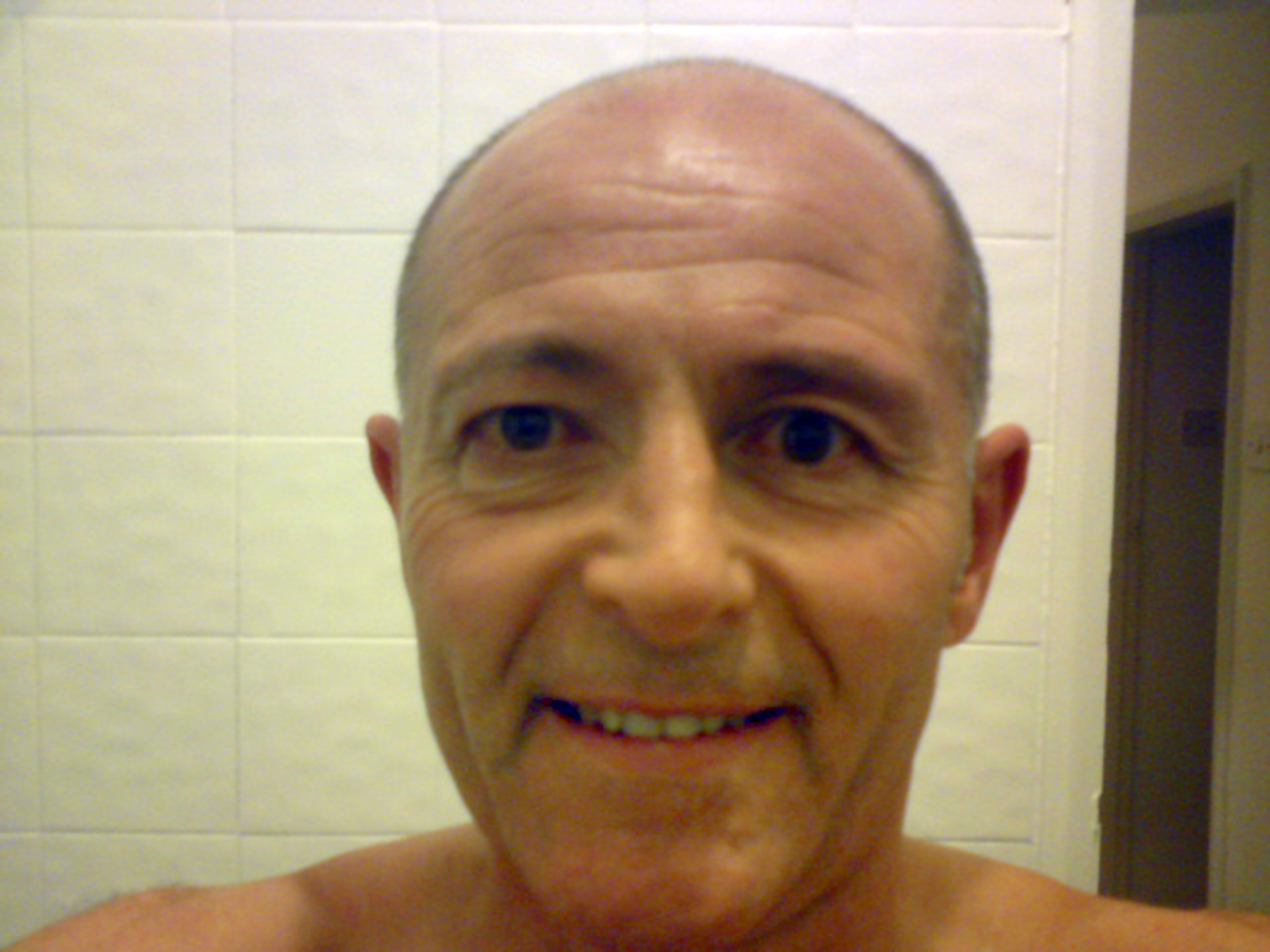 The 58-year-old had spent months dealing with eye problems and had felt pressure on his sinuses but believed he was nothing more sinister than conjunctivitis.

He claims even doctors initially thought it was a dry eye condition before realising it was cancer.

Graeme, a physiotherapist, was eventually diagnosed with a cancerous tumour in his nasal lining in 2011, which he has dubbed "The Alien".

Since then, he has undergone almost 30 operations and now wears a prosthetic face-piece to help him breathe.

Graeme said: "When doctors told me that they needed to remove part of my nose to get rid of the cancer, they said there was a one in 20 chance things would get messy and they'd need to go back for more.

"I thought they were pretty good odds at the time but two weeks after I was called in by the consultant who told me they were going have to go back in and take away my eye.

"I was horrified, and after receiving the worst news in my life, I didn't have anywhere to go, I didn't want to break down in the waiting room with other people.

"So I was left to do it in a hospital corridor, I had nowhere to go."

He was prompted to go to the doctor before going on holiday with his 56-year-old partner Lesley Braithwaite.

"When I was diagnosed, Lesley and I had only been together for five years and I said to her I wouldn't mind if she couldn't handle it, but she hasn't wavered once.

"She's been absolutely amazing, my biggest support, I honestly don't think I'd be here today without her."

Graeme has had countless surgeries to go back and remove parts of the tumour in his nasal lining, correct his breathing, and fit his prosthetic.

Medics can't give him any more radiotherapy or cut away the tumour any further due to it pushing on a major blood vessel, so he will never be cancer free but regular chemo is preventing it from spreading.

He said: "I do get some reactions. I think it gets up my partner, Lesley's nose more than it does mine because when someone stares at me, if I look at them, they look away, whereas she can see people staring for much longer before I've noticed.

He says it was two years ago, when his unrelenting cancer left him with only one more treatment option, that he discovered Maggie's charitable cancer support centres.

He added: "I first discovered them about two years ago, when my treatment options were reduced to palliative chemotherapy.

"I'd had about 25 operations by then but the cancer still kept coming back and was right up against a major vessel in my neck.

"Until then I'd never considered alternative medicines, but I realised I was about to exit this world unless I could make drastic changes to my life.

What is facial cancer and how can I spot it?

Cancer of the mouth cavity or face are known as orofacial cancers.

Each year, there are over 2,500 new cases of orofacial cancer diagnosed in people living in the UK.

This figure might be up to 25 per cent higher because people don't recognise that they have a small cancer and do not seek help at an early stage.

Taken together, oral and facial (orofacial) cancers are the sixth most common cancers worldwide.

Worryingly, the incidence of orofacial cancers has risen over the past 20 years in both the oral cavity and its adjacent structures such as the lips.

Specialists are particularly concerned about the increase in incidence of cancer of the tongue, which tends to affect younger people, aged under 40 years old and more women than men.

There has been much progress in the diagnosis and treatment of most cancers over the past few decades.

Unfortunately, the prognosis of orofacial cancers has not yet benefited from these advances.

Taken together, the 5-year survival rate remains at less than 55 per cent, which is low for cancers in general.

At least 1,400 people will die each year in England and Wales as a result of their oral and facial cancer.

As for many cancers, we should be aware of what is normal for our body and keep an eye out for changes that might be early warning signals.

The patients themselves are most likely to spot changes that might be early cancers of the mouth or face.

The general rule is that if you see anything that is 'new' and doesn't go away after three weeks of careful watching, go to see your dentist (if it is in your mouth) or doctor, who can refer you to a specialist oral and maxillofacial surgeon.

"I made 50 or so changes to diet, environmental exposure, stress reduction, and supplementation.

"All these changes coincided with the opening of a Maggie’s centre in Manchester near where I live.

"I just used to go in and take a seat, they'd offer me a cup of tea and I found it a lovely inspiring place to be.

"I always felt comfortable, they're a little sanctuary where the staff understand what you're going through."

Graeme was inspired to start a fundraiser for Maggie's in last year at the same time he received his successful facial prosthetic which has helped him to breathe and sleep properly and covered up the hole in his face.

Graeme said: "I realised too few people were aware of Maggie’s facilities and resources, so I thought he’d try to change that, by cycling between all 22 Maggie’s centres, zigzagging across the country from Swansea to Inverness in 17 days.

"It's been fantastic doing the ride to this point seeing the centres and meeting the staff and feeling the atmosphere in each one, it's more than matched my expectations.

"Several times I've thought I was going to die so to be able to do this has made me feel alive.

"It's only when you put yourself outside of your comfort zone that you find out what's really inside you.

"There's a quote from the founder Maggie Keswick Jones who set these sites up – she said ‘Above all what matters is not to lose the joy of living in the fear of dying’ which is a concept which I think this ride embodies." 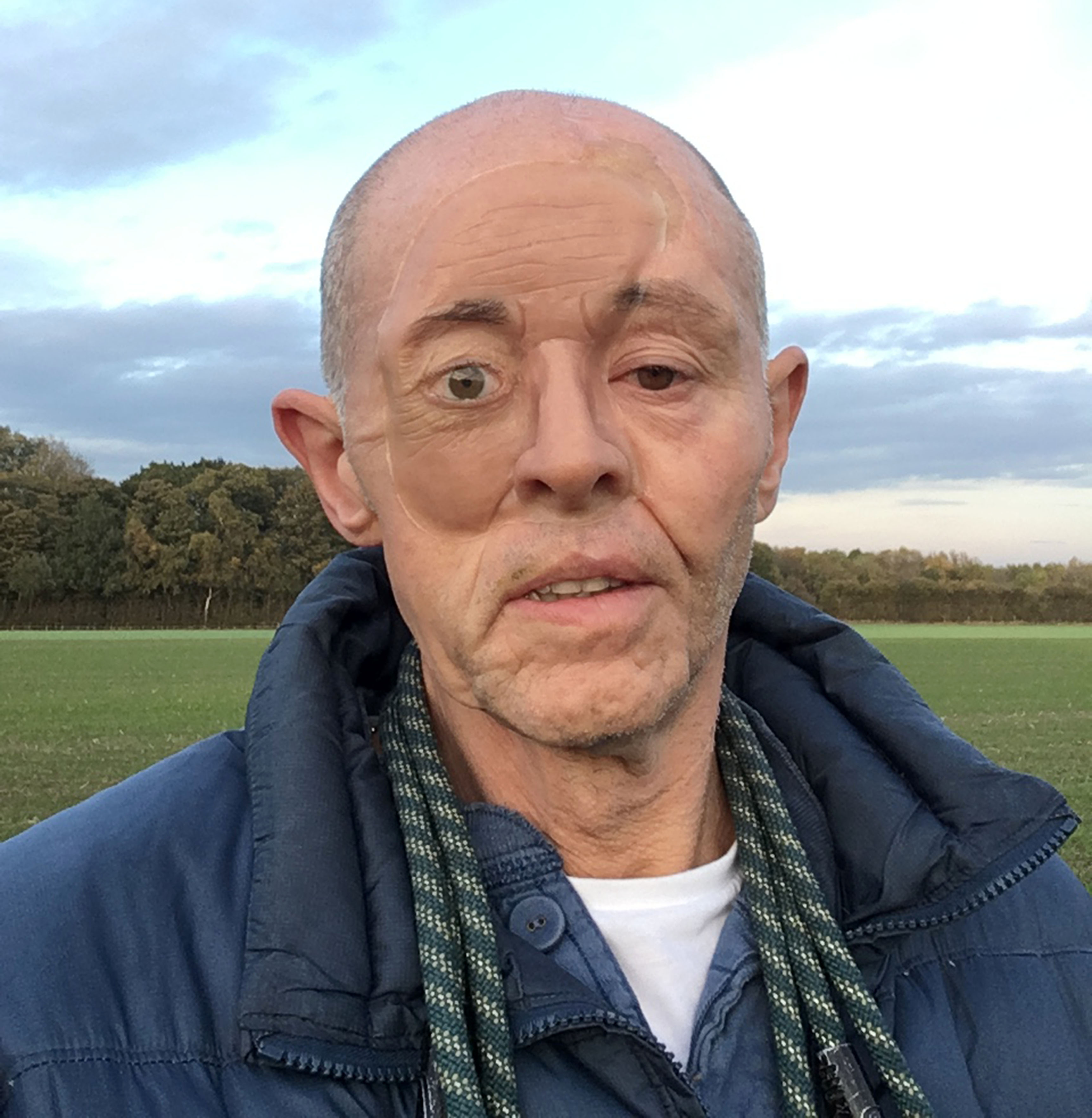 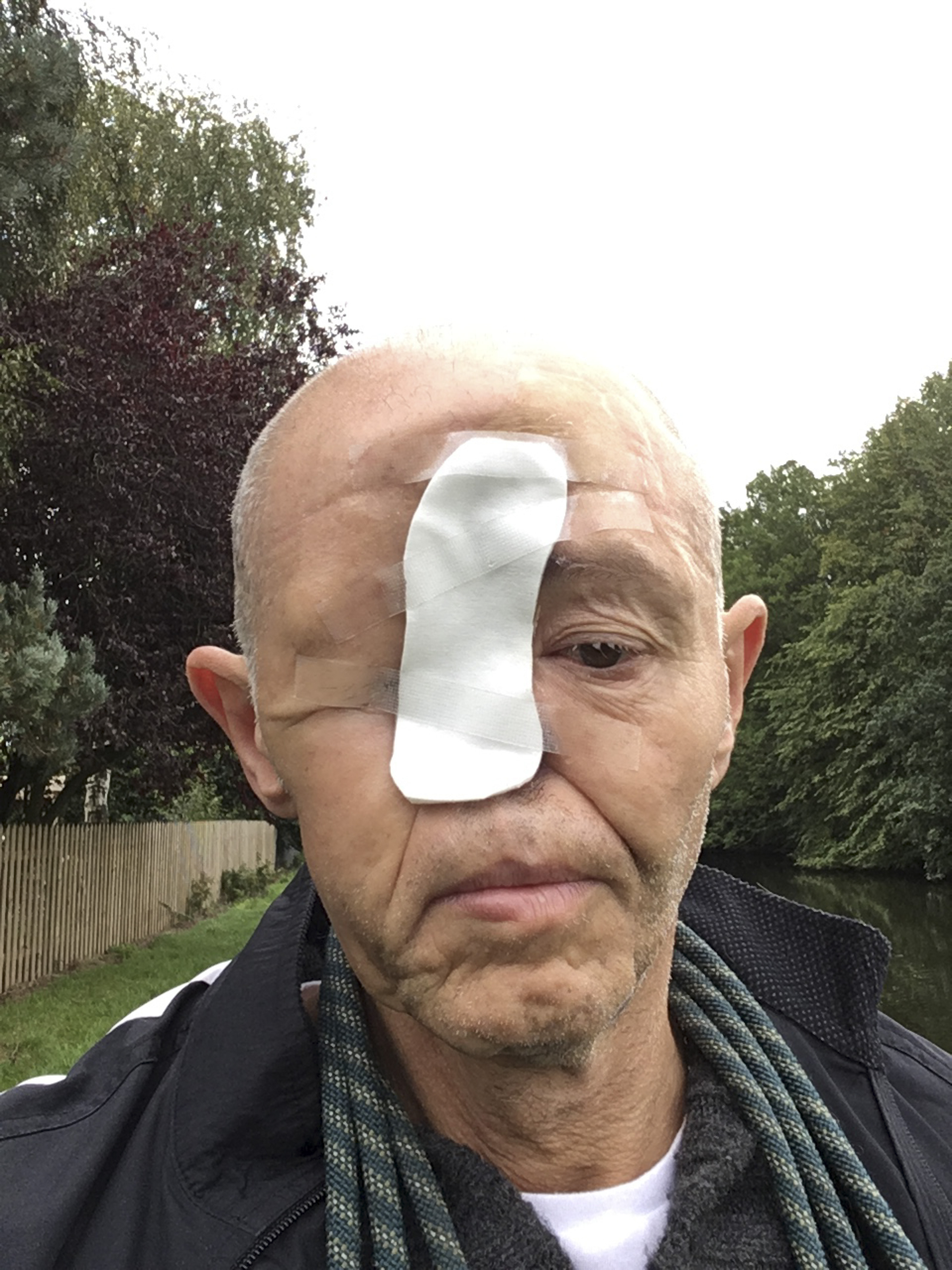 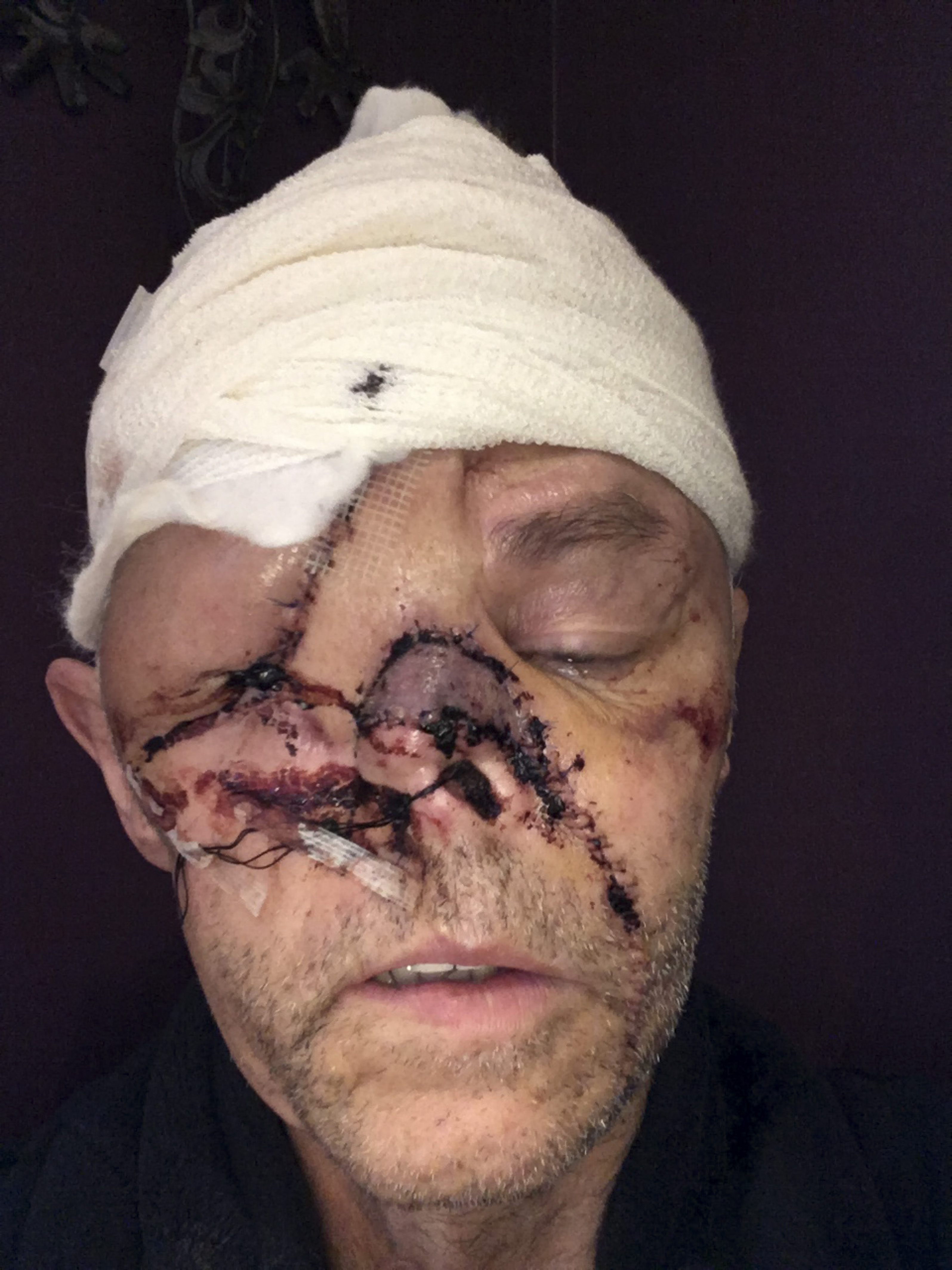 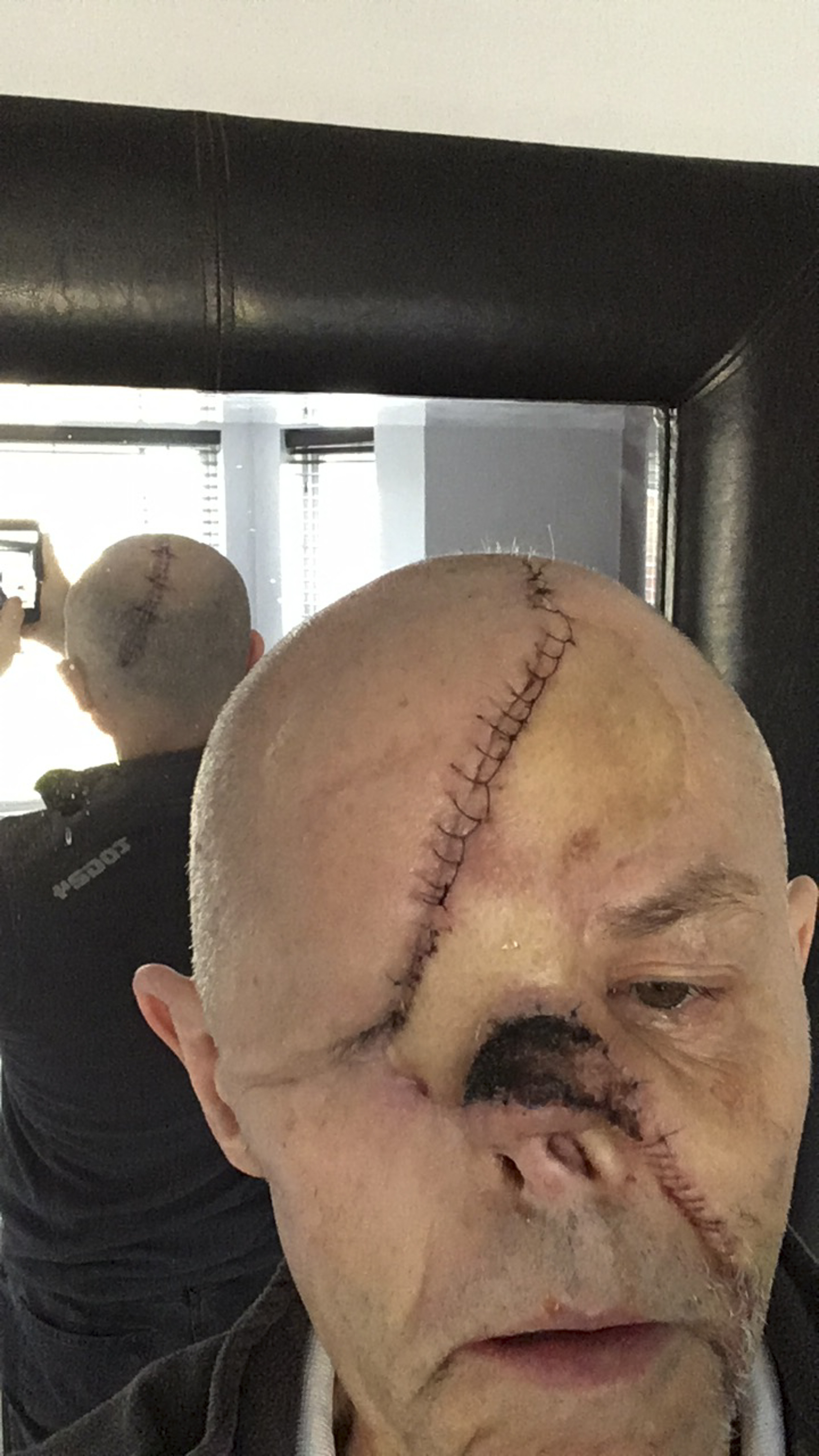 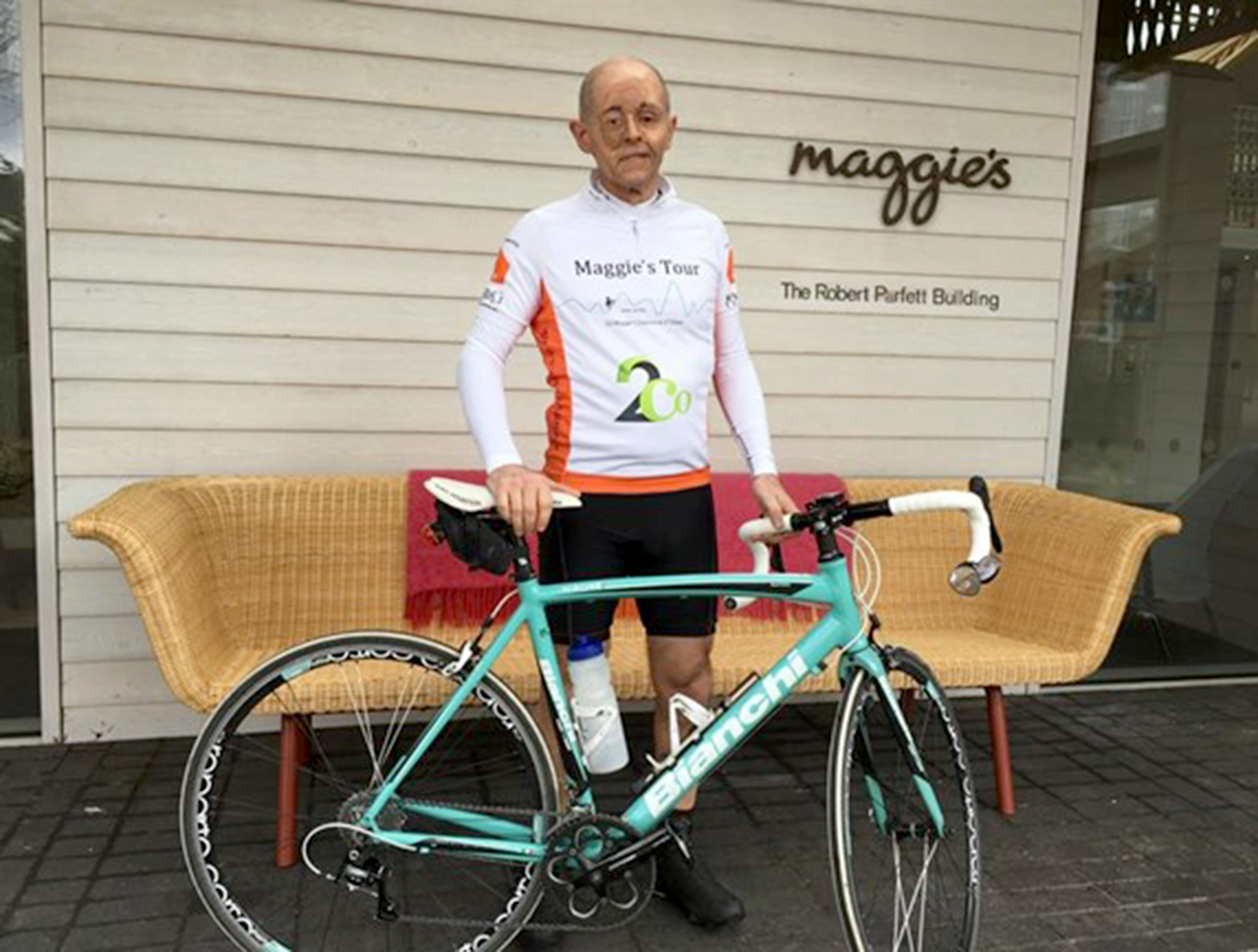 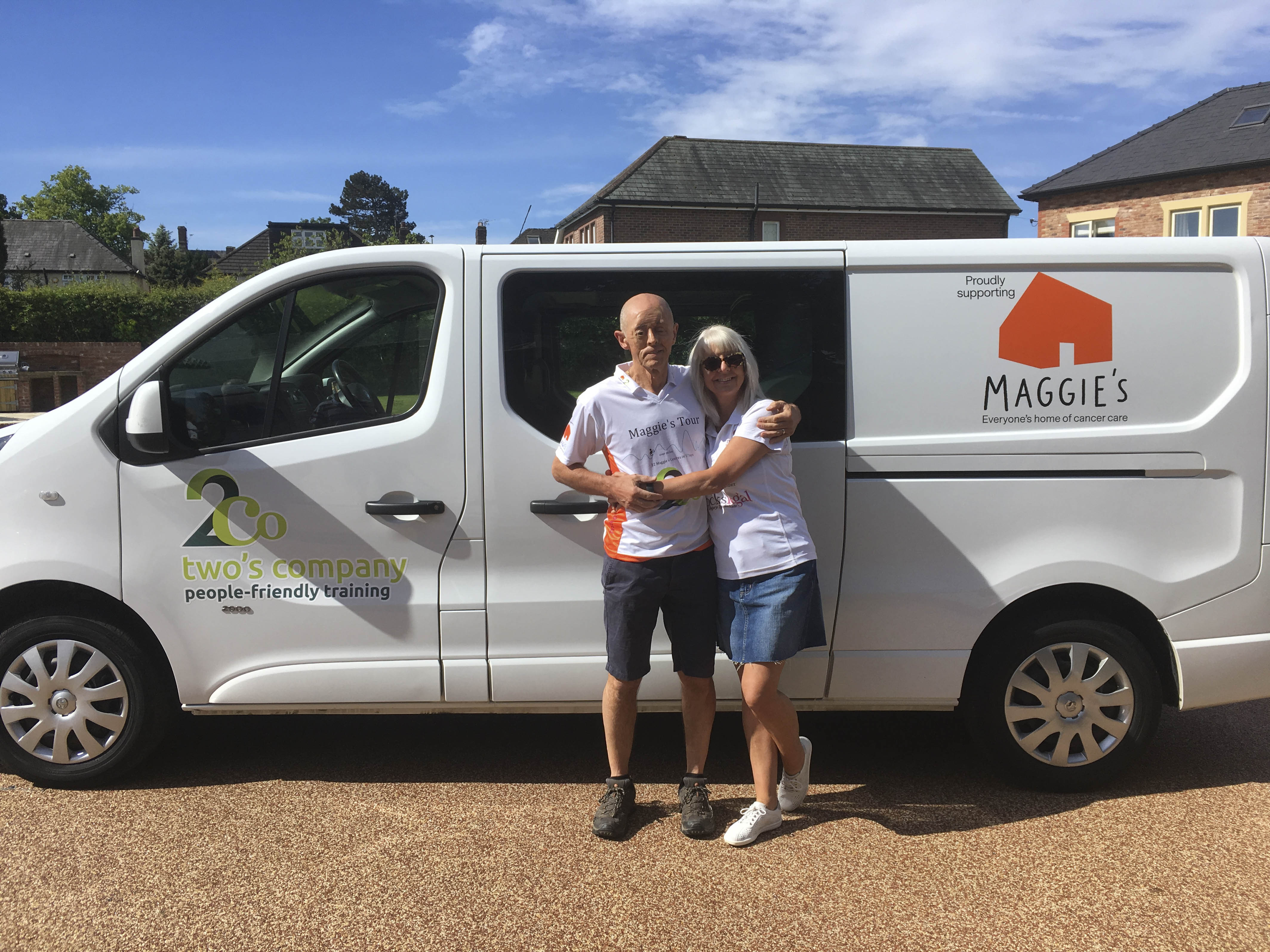 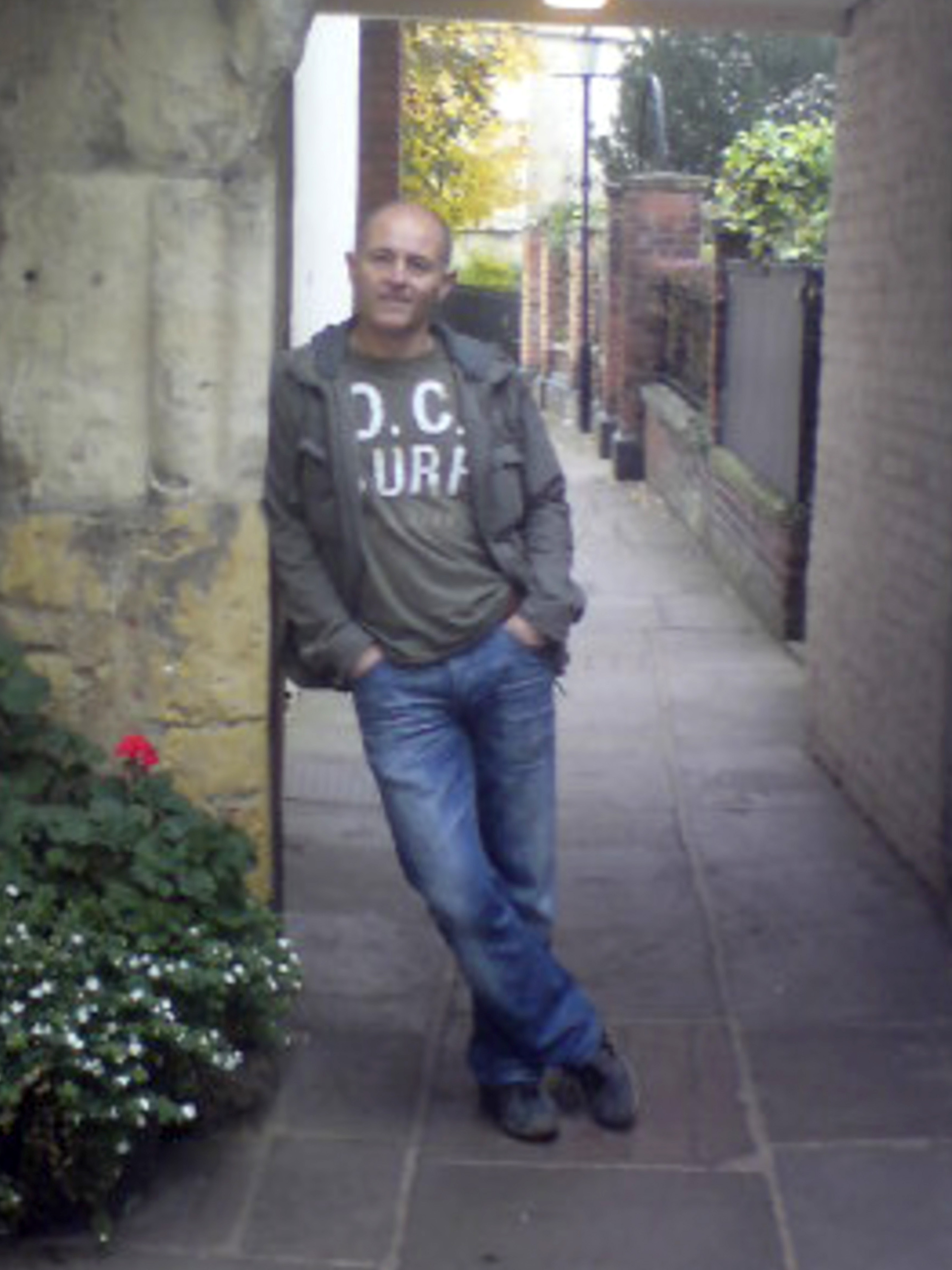 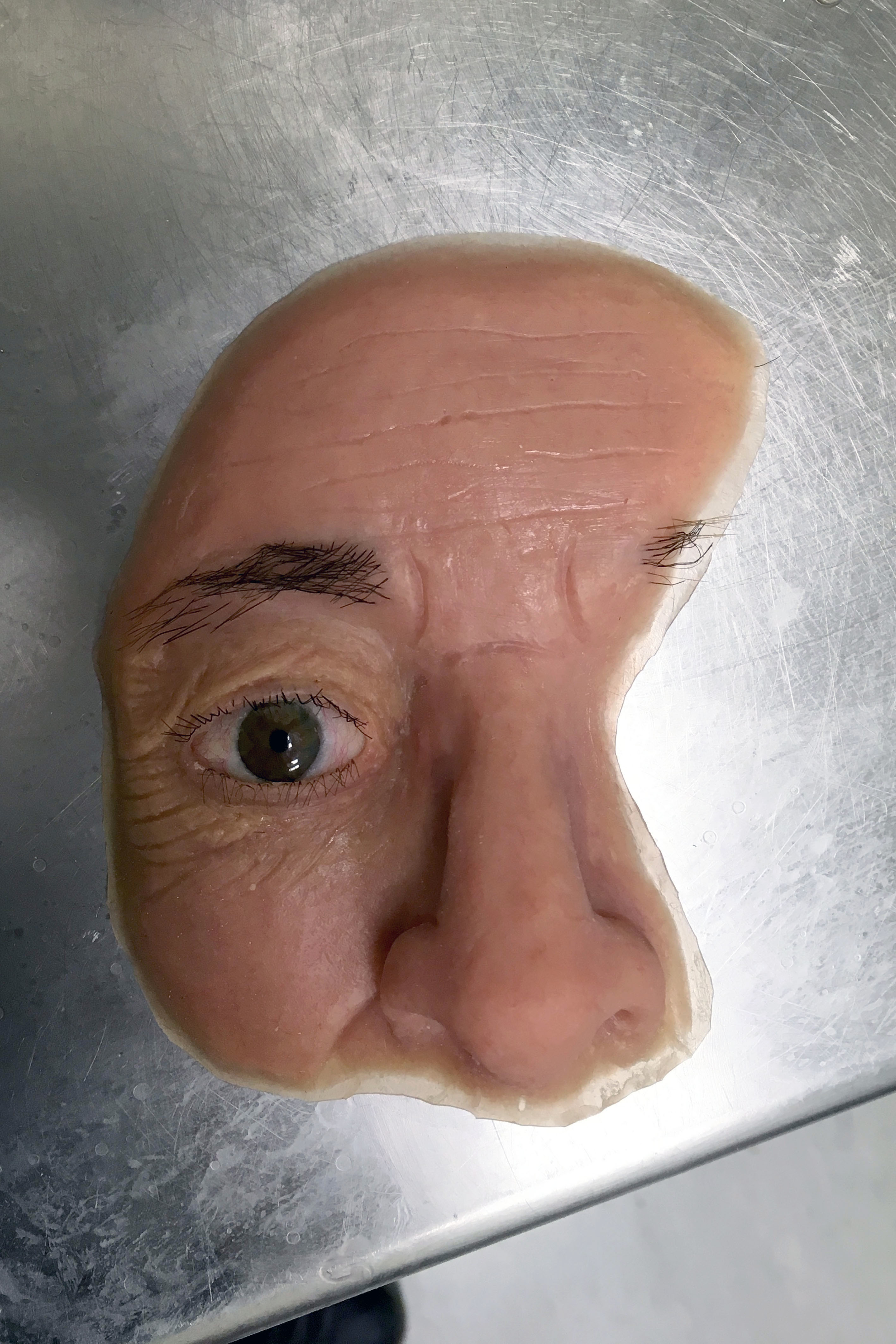