Christmas is cancelled. It was not the message Boris Johnson ever thought he would have to deliver but it is a direct result of the British Prime Minister's own shambolic management of the pandemic.

The British government's response has been mired in inaction, plagued by failures of the state to mobilise and Johnson's own destructive habit of promising false dawns, simply because he cannot stand to be the bearer of bad news. 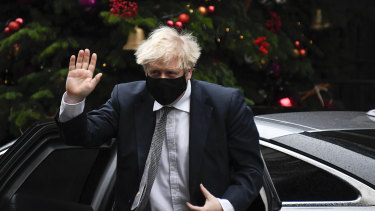 Boris Johnson’s handling of the coronavirus pandemic has been shambolic.Credit:AP

But this weekend he delivered the most crushing revelation of all when he told millions to spend their Christmas Day alone or on Zoom. Stores that were told they could trade until Christmas were abruptly shut one week out and families face the farcical situation of having too much food and no guests while those stranded are urgently buying up stocks they didn't think they would need.

All this against the backdrop of countries slamming shut their borders to Britain, alarmed by the new mutant strain that Johnson says is 70 per cent more contagious although there is no evidence to suggest it is more lethal.

Saturday's announcement was a breach of the pledge that three households could celebrate the festivities for five days if they locked down in November. But the mirage of that promise, which was recklessly made, proved as hollow as the government's own strategy.

While it's tempting to think Britain could have copied Australia's quick response in shutting its border, allowing it to also pursue elimination, this is a lazy analogy. 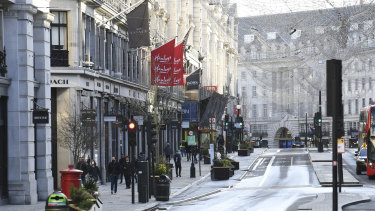 London’s Regent Street in uncharacteristically quiet after shops were forced to close under Tier 4 restrictions.Credit:AP

London is a global city; millions of its residents have families in just about every country around the world. Slamming the gates and locking citizens in and out, as Australia has done, is an antithesis to how Britain sees itself.

Elimination in a country of 66 million people that in 2018 accepted 35 million visits from overseas visitors through its airports – more than Australia's entire population – was never a realistic goal for Britain, even if it shares Australia's island status.

But that doesn't mean the outbreak had to be handled like this. Three mistakes made in the early days of the pandemic set Britain on its course. Tragically, the government, led by bumbling Boris whose governing style is to delegate details to his staff rather than do the job himself, has only compounded his original failures rather than rectifying them.

The first major error was failing to read between the lines when it came to China's early obfuscation about the virus which emerged in Wuhan. This led the British to wrongly believe that they were dealing with something more like the flu than a SARS-like virus.

This is Johnson's only shot at redemption.

The government insists it was never following a herd immunity strategy – on this point it may be fair to accept their protestation, for who would ever describe its litany of bungles as a "strategy".

The second of those came when it stopped testing in early March and lost control of where and how the virus was spreading because it only had the capacity to processes 5000 tests per day in just eight labs. As of March 24, the UK was testing for COVID-19 at a rate of about 1300 tests per million people, well behind the likes of Australia which was testing at a rate of 6590 per million at that time.

To its credit, the government ramped up capacity and is now conducting close to 400,000 per day but the scale of infections – more than 30,000 per day in recent days – makes contact tracing a mission impossible.

The third mistake came because Johnson feared the British would never succumb to draconian infringements and left it too late to lock down. The trio of defences he could have deployed were all executed half-heartedly and too late and Britain has paid the price ever since with the virus now out of control and millions in the harshest lockdown since March, two days from Christmas.

In the government's defence, at-home quarantine is regularly flouted and rule-breaking is rife – the closure of restaurants simply led to more parties in homes. There is also a far stronger anti-lockdown voice in the media and among Tory MPs than exists in Australia. 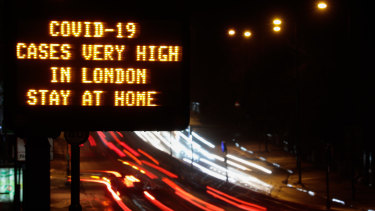 A sign near a highway in London urged people to stay at home.Credit:Bloomberg

Here, Johnson was correct in predicting Britons would weary of the restrictions. As one senior British diplomat put it: "We're just not very good at telling each other what to do." Yet while Britons don't have the same appetite for rules as Australians, this was not the case during the first lockdown when compliance was widespread.

And none of this exonerates Johnson's false promises and the yo-yoing between restrictions and opening up that have characterised his response and bred havoc and uncertainty.

Time after time, he has promised a "return to normal" before the British state was able to deliver. From a "world-beating" track-and-trace scheme to "Operation Moonshot" – a plan to have the public use rapid daily tests to return to mass gatherings and normal life by Christmas – Booster Boris has instead delivered up a busted flush.

His messages have lurched between backing campaigns for workers to return to their London offices and spending £500 million ($887 million) encouraging people to "Eat Out to Help Out" to support the hospitality sector – only to make restaurants first in the firing line whenever infections rose.

Many in Australia, whose Christmas plans have also been disrupted, will sympathise with the curve balls this virus keeps throwing. But Britons have extra cause to feel cheated. They have been whispered fantasies by a prime minister who thinks optimism is a substitute for hard truths and a clear, consistent management plan.

This lockdown, coming in the bleakest winter months, is likely to stretch until Britain can vaccinate enough vulnerable people to allow some semblance of life.

This is Johnson's only shot at redemption. In just one week, 500,000 people have received their first jabs thanks to Britain's early and swift purchase of various vaccine candidates and approval of Pfizer's successful jab. In coming days, Oxford's vaccine is likely to be approved and also rolled out.

Inject or infect, these are Britain's only two options now.

Latika Bourke is a journalist for The Sydney Morning Herald and The Age based in London.