Washington: NASA's New Horizons spacecraft zoomed past a city-sized object just over a year ago. Now scientists believe data taken from that fly-by adds up to challenge how we see Earth's beginnings.

The most distant object ever explored, since named Arrokoth, was a "planetesimal" lurking quietly in the outer solar system 1.6 billion kilometres past Pluto. The spacecraft beamed back images of what looked like two lumpy, reddish snowballs, one larger than the other, gently pressed together seemingly to form an extraterrestrial snowperson. 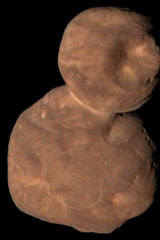 This pristine, primordial cosmic body photographed by the New Horizons probe is relatively smooth with far fewer craters than expected. It’s also a hint to how Earth may have been formed. Credit:NASA

On Thursday, US time, the New Horizons scientists published their full analysis and high-resolution images of Arrokoth in three voluminous reports in the journal Science. They contend this quirky object provides compelling evidence for how planets in our solar system, including Earth, formed four and a half billion years ago from a primordial cloud of dust. The reports suggest planet formation is not as violent and chaotic big-bang process as once assumed.

Arrokoth is a fossil. It has not changed for billions of years. It has been immaculately preserved, like an insect trapped in amber, in a cold, dim, stupendously serene realm of the solar system where nothing much happens, ever.

"This is the best archaeological dig we've ever found into the history of the solar system," enthused Dr Alan Stern, the scientific leader of the New Horizons team.

He told the BBC the discovery was of "stupendous magnitude".

"We have a lot of thoughts about how the solar system formed, but we really need a lot more actual data and direct evidence in order to see which of those models are correct. We just could not have gotten this information any other way," said Kelsi Singer, deputy project scientist for the mission.

The striking feature of Arrokoth is the two lobes. Originally they were separate, but mutually attracted by gravity. They slowly spiralled together and gently merged like two spaceships docking in low Earth orbit. They became a "contact binary."

The New Horizon team ran computer simulations that suggest the "collision" of the so-called head and body occurred at a brisk walking pace. There were no signs of compression fractures, and no flattening  of areas, suggesting a gentle or gradual merger due to gravity.

"This is completely decisive," said Dr Stern told BBC News. "In one fell swoop, the fly-by of Arrokoth was able to decide between the two theories."

The new papers suggest this "local" cloud collapse was the norm in the embryonic solar system. The result of the process was the creation of Arrokoth-like objects that served as fundamental building blocks for larger planetesimals, dwarf planets, full-blown planets like Earth and eventually giant planets – with a couple of them, Jupiter and Saturn, so big they became gas giants.

This model for planet formation rejects an older theory of "hierarchical accretion" in which there is no gentle building-block stage but rather a wild and woolly process in which particles, pebbles and boulders of all sizes gradually come together amid many violent collisions to form a planet.

"To build planets, you don't just start with small grains and gradually they build up to larger and larger objects progressively, but instead you have local gravitational collapse of clusters of material in the solar nebula, that come together to form medium-size objects," said John Spencer, an astronomer at the Southwest Research Institute in Boulder, Colorado, and lead author of one of the new papers.

The gentle clumping theory was first developed by Professor Anders Johansen of Lund University in Sweden.

When told by the BBC his theory had been confirmed, Johansen paused then said he "felt great".

"There was a previous picture that planetesimals formed 'bottom-up' as larger and larger chunks of rock would collide to form increasingly massive bodies. But this picture does not agree with Arrokoth, since that body has very few craters and since the collision of the two components must have been very slow," he later said. "This then also implies that the Solar System planets formed by gentle pebble accretion and not by violent collisions."

Arrokoth is one of billions of small bodies orbiting the sun at a distance of several billion miles, out beyond the orbit of Neptune, in a chilly region known as the Kuiper belt. To be more precise, Arrokoth is part of the "Cold Classical" Kuiper belt, which is distinguished by how remarkably well-preserved everything is.

The objects do not get disturbed by nearby planets' gravitational pressures. They never make a dash toward the sun and turn into a comet, as do many Kuiper belt objects with orbits that wander outside the region. They do nothing, for eons, bathed in a dim light of the distant sun.

Only two interesting things appear to have happened to Arrokoth in 4½ billion years. The first was the merger of the larger lobe with the smaller lobe. The second was the visit by a spaceship from Earth. 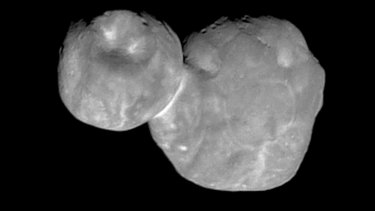 Arrokoth means ‘sky’ in the language of the Native American Powhatan people.Credit:NASA

Arrokoth happened to be roughly in the path of New Horizons after it made its historic flyby of Pluto in 2015. It was spotted by the Hubble Space Telescope in a search for something New Horizons could visit as it exited the more familiar realms of the solar system. The spacecraft burnt some fuel to adjust its trajectory, and on January 1, 2019, passed by it at a distance of  3537 kilometres.

During the fly-by the spacecraft had to be oriented precisely, via remote-control instructions sent far in advance, lest the cameras miss the shot. They did not miss.

"It's kind of amazing that we can target this tiny thing, 43 times further from the sun than Earth is, and actually go there and see what it's like," Singer said. "Pluto was obviously hard to top, but this was pretty darn cool too."

Arrokoth was briefly dubbed "Ultima Thule" before the New Horizons team learnt the term was used by white supremacists to refer to a mythological Ayran homeland. Instead, with the endorsement of Powhatan elders, scientists gave it a name meaning “sky” in the Powhatan/Algonquian language.

The new trio of papers represents a massive download of data from the distant spacecraft, combined with computer modelling in the months since the flyby.

New Horizons is not dead yet. The spacecraft is continuing on its journey into what is clearly not quite a void.

Later this year, Stern said, telescopes on Earth will examine that part of the sky to see if there is another target for observation somewhere in the path of the spacecraft. The spacecraft has enough power to operate for another 15 to 20 years, he said.