Activists calling for more action to combat climate change are set to cause major disruption in the Melbourne CBD with a week of protest activity planned.

Several tram routes were diverted and the intersection of Spring Street and Bourke Street was closed on Monday morning as protestors kicked off a week-long “autumn rebellion” event organised by climate change activist group Extinction Rebellion. 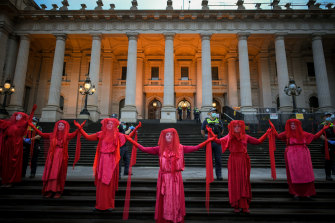 Commuters have been advised to allow extra time when travelling through the CBD, with about 2000 police officers rostered on this week to manage the protest activity.

The first event took place at 8am on Monday, with people gathering at Parliament House dressed in red. Some participants then lay in the middle of the street covered in white sheets.

Route 86 and 96 trams were being diverted via La Trobe Street between Melbourne Museum and Spencer Street and Yarra Trams were encouraging people to consider Collins Street trams or trains on the City Loop.

There are also “mass disruption actions” planned between 5pm and 7pm on Monday.

The group is calling for the government to declare a climate and ecological emergency and to halt biodiversity loss and reduce greenhouse gas emissions to net-zero by 2025.

“Our government has failed to protect us. We must intervene,” the group said in their description of the event. 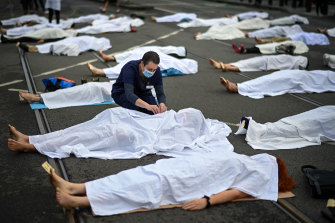 “We will be disrupting Melbourne as part of a coordinated national Rebellion in all state capitals. Help us make this a massive act of civil disobedience that no-one can ignore. We can’t afford anything less.”

They are encouraging people to take the week off work to join them. Some plan on camping for the week in Carlton Gardens.

Victoria Police Assistant Commissioner Luke Cornelius said the group had been granted approval by the Department of Health to hold the protest. 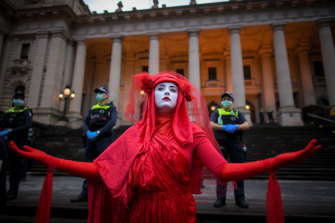 Victoria Police have rostered just under 2000 members to oversee the protests.Credit:Eddie Jim

However, he said they did not have permits from the City of Melbourne to camp in Carlton Gardens and police would be working with local law officers to take the camps down if needed.

“If someone does set up a tent overnight, and they get under our radar, if they’re not packed up in the early hours of the morning, the City of Melbourne have told me they’re putting sprinklers on so people will find themselves getting very wet if they choose to camp overnight,” he told radio station 3AW.

He said they had rostered just under 2000 members to oversee the protests.

“To ensure public safety, over the course of those events that’s 2000 members who would otherwise be out in local police stations keeping the community safe,” he said.

“Policing such a significant and disruptive protest over such an extended period of time has a huge impact on community safety.”

Last Friday, two climate activists were charged after blocking the intersection outside Flinders Street station with a rental truck.

Organiser Tim Neville told Nine News: “We apologise for all the disruption that takes place, but we also want to sound the alarm about the crisis that’s happening”.

The Sydney and Brisbane “autumn rebellion” events were forced to be cancelled due to extreme rain and flooding.

Minister for public transport and roads Ben Carroll said he was concerned the protests would damage the city’s fragile recovery.

“One disruption is one too many,” he told radio station 3AW. “There are ordinary Victorians going about their lives, trying to get to work safely and securely.

“Be aware other people are going about their daily business just trying to get to work.”